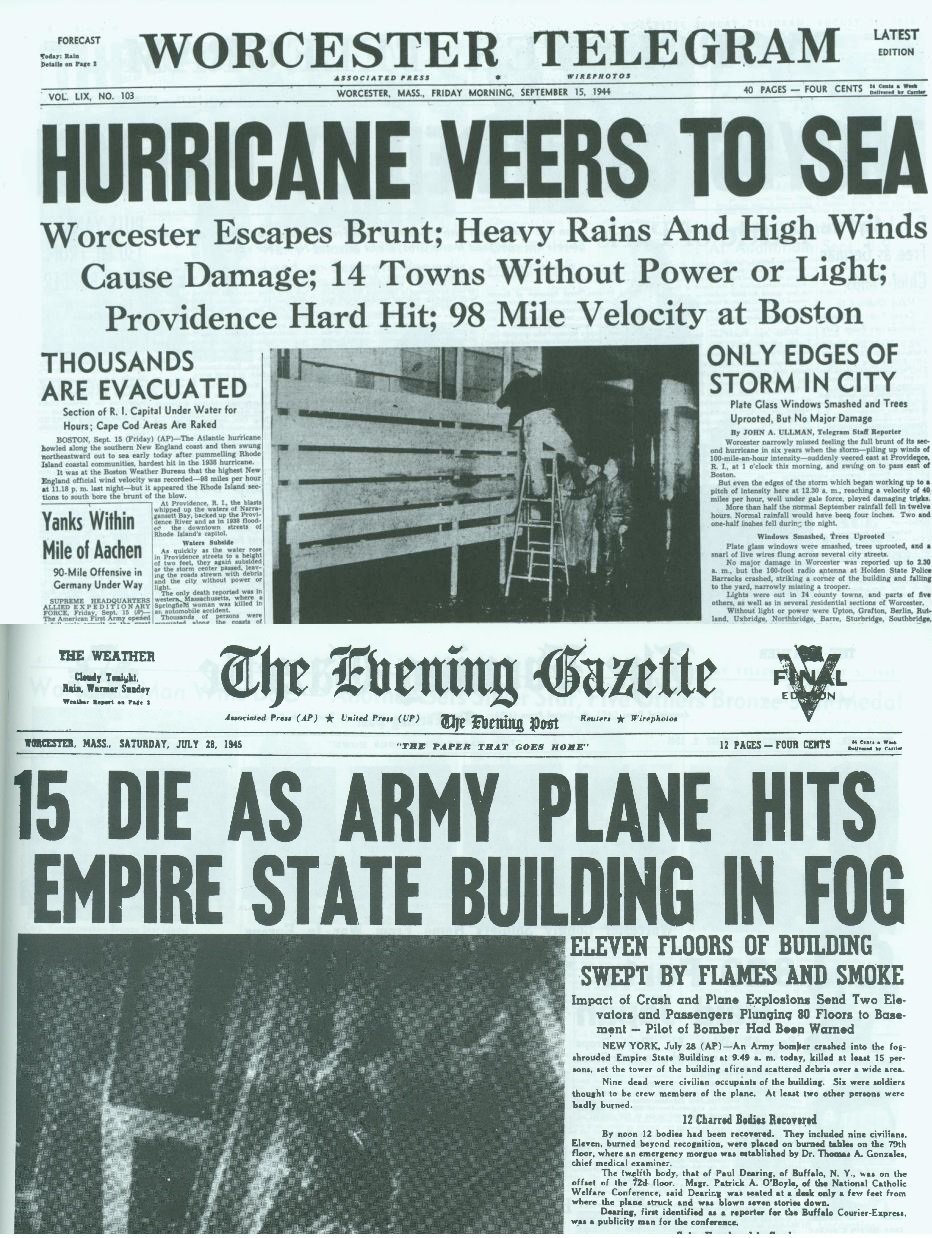 The Worcester Telegram and Evening Gazette made for a unique two-newspaper town.

An old friend of mine, now gone, used to have a cartoon clipped and stuck to the door of his refrigerator. Superman was sitting on a park bench in full costume, studying the pages of a newspaper’s Jobs Wanted ads. (Ask your parents, kids.) Seated next to him was a frustrated Lois Lane, who was saying to him:

“You could do anything you wanted but, no, you had to work for an afternoon newspaper.”

This is a joke that made me laugh but that now is, sadly, as archaic as a limerick in Latin or a joke to which a buggy whip is the punch line. When I grew up in Central Massachusetts, living in Shrewsbury and going to grammar school in Worcester, at St. Peter’s in Main South, there was a newspaper (The Worcester Telegram) on the kitchen table every morning and another one (The Evening Gazette) on the kitchen table every night. They had different reporters, different columnists, different comic strips and different news. The evening paper had all the crime and human drama that had taken place while I was diagramming sentences under the watchful eyes of the Sisters of St. Joseph. (Six months before I was born, my mother was alone in our house when the Worcester tornado tore through Shrewsbury. It missed deadline for that day’s Gazette but the June 10, 1953, edition of the Telegram was all over the story.) Even when I was very young, I found this a luxurious amount of material to read, day after day. Every afternoon was like a tiny Christmas.

I would get home late. In winter, it already was dark when the second of my two daily buses dropped me at the top of my street. I would fix myself cheese and crackers, and a glass of milk, and grab the sports section of the Gazette to see what was going on with the Holy Cross basketball team, or what the staff had to say about what were then the pathetic Boston Red Sox. It was part of a decompression strategy to help me through days that were made longer by the fact that it took me two long bus rides to get home. Every day was bracketed by newspapers, morning and afternoon. Newspapers were the way I entered the world, one fading evening at a time.

However, Worcester was not strictly a two-newspaper town, the way that Boston is today. The Telegram and the Gazette had separate staffs, and they occupied separate spaces in the newsrooms in the offices along Franklin Street. But, until the 1980s, the two newspapers were owned by the same company. And the publisher was a guy named Bob Stoddard, and thereby hangs my closest – and unquestionably my oddest – association with an institution that now is little more than a shadow of itself.

A good get, conservatively speaking
In 1978, I was working for Worcester Magazine. I had pitched a story about the 20th anniversary of the John Birch Society, the virulently conspiratorial, anti-Communist organization founded in 1958 by Robert Welch. One of the men Welch invited to Indiana to help him get the outfit started was Robert Waring Stoddard of Worcester. 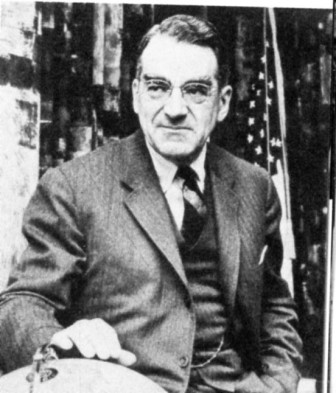 The two Worcester newspapers were products of a time of great social and political turmoil. In the mid-19th century, when both of them were established, the city was a hotbed of both abolitionism and the nascent women’s rights movement. (In 1850 and 1851, the first two National Women’s Rights Conventions were held in Worcester.)  In 1925, Stoddard’s father, Harry, a successful industrialist who owned Wyman-Gordon Co., bought the newspapers and his son, Robert, took over both the company and the two newspapers. (Among its other products, Wyman-Gordon made turbine engines for B-52 bombers, which is why Worcester was a high-value target for Russian ICBM’s and also why we all jumped under our desks at St. Peter’s during the Cuban Missile Crisis in 1962.) Under the Stoddards, whatever remained in the Worcester newspapers of the progressive ferment of the time of their founding was pretty effectively snuffed out. The Telegram was a hardcore conservative newspaper, the Gazette only slightly less so, but the Gazette had a better sports page.

I learned all of this history in preparation for a scheduled interview about the founding of the JBS with Bob Stoddard in his office at the newspaper headquarters on Franklin Street, hard by the Common and down the block from what used to be Denholm & McKay. Stoddard rarely gave interviews at that point, for reasons that will shortly become clear, so this was a pretty decent get, all things considered.  I put on a tie, which also was something of an event, and was ushered into Stoddard’s office. The place was dark, long blinds drawn over every window. He sat behind about an acre of desk. On his side of the desk sat a small model of a B-52. He looked very old.

We spoke for a long while about the events of 1958, when Robert Welch had invited Stoddard to Indiana because he liked Stoddard’s views on the existential peril confronting the republic because of organized labor and his views on the constitutional heresy embedded in various civil-rights laws. (At Wyman-Gordon, for years, the only African-American employees were janitors.) Stoddard was lucid and interesting. As I recall, he still was particularly aggrieved by the efforts made by William F. Buckley Jr. to distance modern conservatism from the conspiratorial Birchite philosophy. But what I remember most vividly was the model B-52. Every few minutes, while we were talking, Stoddard would pick up the little airplane and swoop it around, making soft whooshing noises as he did so. I thanked him for his time and walked out of the dark office and out of the building and across the sunlit Common. 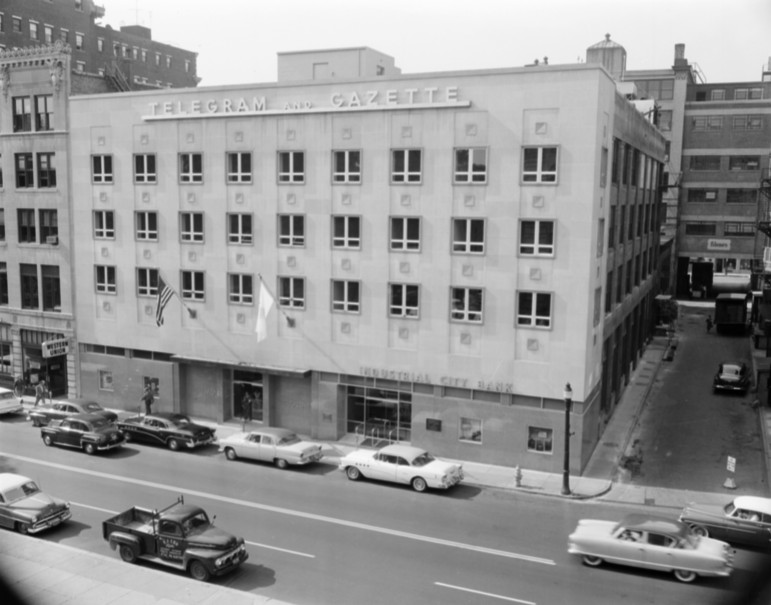 The Worcester Telegram and Gazette Building in the 1960s

As it happens, this was the last story I wrote for Worcester Magazine. My editor at the time killed it for reasons that make even less sense now than they did then. I sold it to the Boston Phoenix, which led to a job there, which led to everything else that’s happened in my career. I will be eternally grateful to Bob Stoddard and his little model airplane. The editor of the Phoenix told me that story had sold the piece.

What’s an afternoon newspaper?
I was a child of newspapers even before I became a child of television. I knew Dondi and Gil Thorp before I knew Rocky and Bullwinkle. I knew Paul Johnson before I knew Jim McKay. I knew George Wells before I knew Walter Cronkite. Newspapers, these two in particular, were the way I first entered the world, and they remain my preferred point of entry, even now that they are one newspaper, published in the morning, and having passed through the hands of several absentee owners since Bob Stoddard died in 1984.

I was a child of the new newspapers that rose up in opposition – or as “alternatives” – to newspapers like the Telegram and the Gazette. First came Worcester Magazine and then came the Phoenix. I moved along into the mainstream press from time to time – at the Boston Herald and, more recently, at the Boston Globe – but there always was something drawing me back away from the conventional newspapers. Now, they’re dying, the Phoenix is dead, and almost all my work is done online, for publications like this brand new one.  But I was a child of the Worcester newspapers before I was anything else.

I have lived long enough to see the entire business change, for good and ill. Afternoon newspapers are now something I have to explain to people, like the missile crisis or B-52s as airplanes and not a pop band.  I am having a grand old time in the new media age. There’s something in it that appeals to that part of me that always was in love with words, and there’s something in it that appeals to my vestigial love of the renegade press, dating back to colonial pamphleteers, to the rabble-rousers who assembled in Worcester in the 1850s to agitate for women’s rights and against slavery, to what became known as the “alternative” press, where I was lucky enough to cut my teeth. It is loud and uninhibited – the marketplace of ideas as a roiling Moroccan bazaar and not a quiet little boutique shop into which you have to be buzzed in. It is modern technology, but the spirit of what that technology produces is unquestionably a throwback to the beginnings of journalism in America.

I have a history that snuck up on me when I wasn’t looking. All of a sudden, one day, two of the places at which I had written simply didn’t exist anymore, and the places that survived had changed completely. All of a sudden, nobody was just writing anymore. They were producing content across several different platforms. The technology drove an acceleration that occasioned a time in which the news comes in, not twice a day with a thump on the porch, but every second, from a thousand places, in soft little signal bells in your pocket. You can watch the evening news on your telephone. Christmas loses its impact when it comes by the minute.

But that history begins on all those mornings and all those afternoons, when two newspapers arrived at our door in the suburbs from what we all used to call “downtown,” even though we didn’t live in Worcester anymore. That was the way I entered the world. I am very glad I walked through the door.

Charles P. Pierce is the author of a national best-seller, “Idiot America,” a staff writer for ESPN’s Grantland, regular contributor and lead political blogger for Esquire, and frequently appears on NPR programs, including the quiz show “Wait, Wait … Don’t tell me!” He will surely be adding “Worcester Sun contributor” to his formidable taglines in short order.

Charles P. Pierce is the author of four books, including a national best-seller, “Idiot America,” a staff writer for ESPN’s Grantland, regular contributor and lead political blogger for Esquire, and frequently appears on NPR programs, including the quiz show “Wait, Wait … Don’t tell me!” He worked for Worcester Magazine before gaining prominence in publications such as Boston Globe Sunday Magazine, LA Times Magazine, Sports Illustrated and The Atlantic to name a few.

4 thoughts on “Cover story: History sneaks up on you, like a B-52 on Franklin Street”