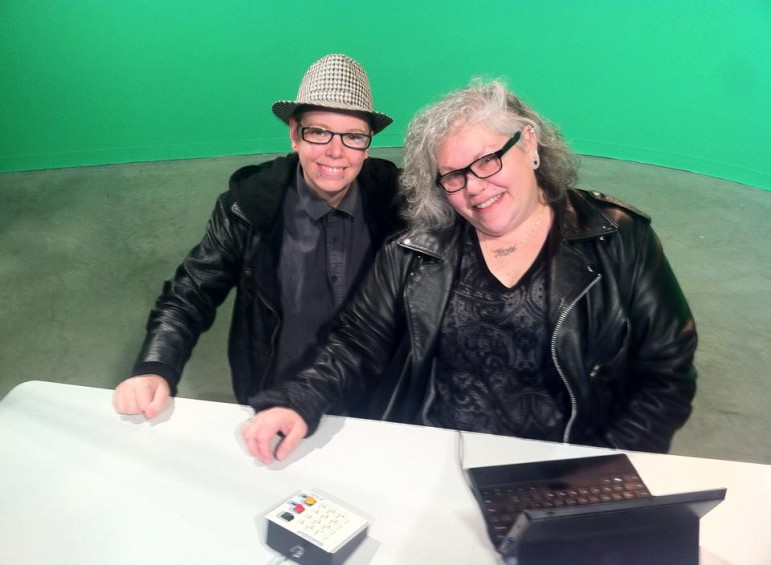 Wendy Edge, founder of Bulldozer Health Inc., right, sits with good friend and collaborator Oxygen Edge as they produce one of Bulldozer’s podcasts.

Go ahead and try to stop Wendy “Love” Edge.

Sure, it is possible, but there is little evidence to suggest that this is achievable — much like, for instance, an average person passing an applied physics exam.

Traditional prescription medications, she says, failed her after she was diagnosed with dermatomyositis in the autumn of 2011, just a year removed from being married to “the woman of (her) dreams” at Worcester City Hall.

She was told either the disease itself or one of the 16 medications or injections prescribed to treat it would eventually kill her. Two years’ worth of painful struggles, including moving to and from Fayetteville, Ark., ensued, culminating in her separation from her wife. The move back to Massachusetts made access to and affordability of medicine a bit easier, but Edge “felt defeated and was just surviving.”

By October 2013, Edge — who has lived in Worcester 25 years and raised her sons here— decided she needed to take more control over her health and treatment. With the help of medicinal cannabis, she says she weaned herself off seven prescription drugs and began to focus on alternative health solutions, including other herbs and seeing a chiropractor; she  supplemented these with traditional factors like improved diet and more exercise.

“I was starting to get better,” she said. “I realized, though, that I was struggling to pay for these options, and I could go down the street and get the pharmaceuticals for next to nothing on my insurance. I realized I had no medical freedoms, really, outside of pills, surgery and tests.”

That was the light bulb moment. Well, that, and a serendipitous email from a remote outpost in Missouri.

Separated, Wendy hadn’t heard from her musician/artist best friend and former partner, Oxygen, in a couple of months until that email arrived — with a song. The title of Oxygen’s song echoed an indelible image that Wendy had lately been obsessing over. The song was called, “Bulldozer,” the same powerful tractor Wendy had pictured over and over in her mind, pushing away all the pills she didn’t want to need.

Bulldozer Health Inc. was born, and Wendy’s path toward advocating for medical freedoms was clear.

“Eventually, I came to a stark realization,” Oxygen said. “Even with the incredible network of healthcare knowledge available in Massachusetts, the main focused solutions offered to me involved pills, pills and more pills.  Each pill that I was prescribed brought a new diagnosis caused by a never-ending list of side effects.”

One of the nonprofit’s central focuses is a push to ban psychiatric drug advertisements from television. “We won’t rest until we accomplish that,” Edge said.  But the story of Justina Pelletier took them in a symbiotic but different direction.

Pelletier was taken from her parents in 2013 when differing diagnoses of her condition (from separate Boston hospitals) and her parents’ preferring one course of action over another led to a drawn-out legal battle and national headlines.

She returned to her West Hartford, Conn., home, but remains ill and endured surgery in July. That the Pelletiers were pulled into such an ordeal was a disturbing turning point for Wendy.

“I was angered and baffled that parents’ rights to choose medical treatments for their children were being taken away,” she said. “I talked to our board about doing a film on the subject to follow some of the families and investigate fully the idea of our disappearing freedom not only to choose and have access to health care options, but to choose for our children.”

Medical kidnapping is the heads to medical child abuse’s tails, two sides of the same coin with children stuck impossibly in the middle. How can a doctor know the child better than his/her parents? How can parents think they’re qualified to flout an experienced doctor’s opinion?

Either way, removing a child from his/her home is a decidedly drastic measure.

Indeed, “Medically Kidnapped: Crimes Against Our Children,” is a startling and arresting title amid the roster of films seeking support on Indiegogo, like “Bear City 3” and “Easy Girl.”

Wendy enlisted Oxygen — with whom she continues to amicably collaborate on a number of Bulldozer Health projects, including regular podcasts — and well-known local musician Ari Charbonneau to be the creative muscle behind the documentary, which will initially focus on four families (from Massachusetts, Connecticut, Illinois and Oregon) who have already agreed to tell their stories.

“Our  medical freedoms are being taken away from us, slowly but surely, and the majority of America is either unaware or in denial of this truth,” Oxygen said. “I hope to make more people aware through this documentary.”

The group is seeking $8,800 to support the film, including $3,800 for camera equipment and lighting, $3,500 for travel and $1,500 for accommodations and expenses. They had raised $26 as of early Saturday, Aug. 8, with 35 days remaining in the campaign. (It is a “flexible funding” campaign, meaning the group does not need to meet its goal in order to collect donations.)

“Children are being taken by (child-protection agencies) because families choose natural remedies, want medicinal cannabis for kids with seizures or just simply because they seek other opinions,” Wendy said. “The public needs an in-depth film about this so that we can work to make changes. Knowledge and information can create powerful change.”

Wendy, who worked as an occupational therapist before being disabled by her illness, says she “continues to take back (her) health.” She’s reduced her medicinal intake and lost 55 pounds. Mostly, though, she’s determined to make a difference.

“I want everyone at every age to have the freedom of choice in their health,” she said.

Good luck trying to stop her.

If you know of a Worcester-based crowdfunding effort deserving of attention and support, send us a head’s-up at info@worcester.ma.