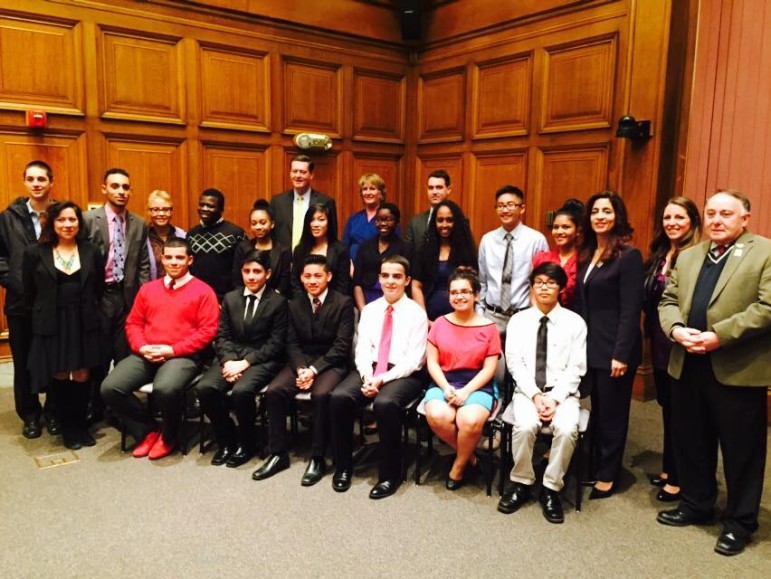 It would seem that the youth of Worcester are up to no good. Some might say there has arisen this summer an unprecedented epidemic of violence and apathy among the city’s teenagers ‒ those, anyway, who live and learn in the shadowy, reputation-stained corners of the city not seen in the New York Times.

Heathens and miscreants, all of them. Destined to follow in the footsteps of every bad example they bump into on their cracked-sidewalk, broken-streetlight walk home from school. Destined to be ignored. Forgotten.

Like it or not, that’s how many youngsters in the city feel: ignored and forgotten, painted with the same broad strokes that color perceptions of their neighborhoods, like Main South and Great Brook Valley. Look at how they treat their neighbors; what do they have to contribute anyway?

Well, if you would kindly look past the reputations and preconceived notions, you might see the same thing Katherine A. Esparza and Caleb Encarnacion-Rivera have observed and fostered and built with their Main South-based youth group: hope.

Y4D4, Youth for District Four, is decidedly up to good.

“The main purpose of the council is really to advise the decisions that we’re making for our youth, thinking about the education system, thinking about our parks, thinking about police involvement in our neighborhood(s) and how youth perceive that,” Esparza said.

“I truly believe it has an impact. At the same time this is about a process, and it’s not necessarily about this end goal where we say, ‘We wanted to impact 100 people.’ It’s not about that, and (that’s) something Caleb and I talk a lot about ‒ we tell the youth all the time ‒ it’s about planting those seeds.

“We’re sharing this information because we want to plant seeds of reflection in each of the people we interact with,” she said. “I would say that’s our goal.”

“We’re sharing this information because we want to plant seeds of reflection in each of the people we interact with.” Katherine A. Esparza

While the councilor’s son started Y4D4 in spring 2011 to encourage political participation and awareness in District 4 ‒ and to promote the first-term election of Rivera ‒ the panel has evolved into its own entity, one which encourages youth to find the value in standing up, speaking out and assuming a stake in what happens in their neighborhood.

“We are sometimes left out of the decision-making (process) and our district is very neglected,” Esparza said. “Y4D4 is a space for that, a space to really think and envision and reflect on (our) role in the community.”

The first initiative to gain wide traction and make a tangible impact grew from the group’s own principles. They built a curriculum around the concept of youth organizing and were invited to present it at a conference at Clark and to students at Claremont Academy, University Park Campus School and Dynamy.

They wanted to impart to their peers, Esparza said, that “we actually can organize and we do have a voice. ‘And you’re making decisions about us?’ We should be part of those decisions.

“So that was the focus of this training, ‘How do we share this with our fellow youth?’ … We want this to be coming from our perspective.”

Community activists and Clark students combined to create a conference at the university around issues of police brutality, born from the 2014 police shooting of Michael Brown in Ferguson, Mo. Y4D4 was one of the event’s presenters.

The group tailored its already-built curriculum to focus on dialog surrounding “the intersection of social and racial justice, and youth organizing,” Esparza said. About 80-100 people attended the Voices of Ferguson/Voices of Worcester conferences last fall and this spring.

Then, over the summer, Y4D4 took its message to Claremont, UPCS and Dynamy, expanding it at University Park to include a “power analysis” to further impart the necessity of youth involvement. It was well received and much appreciated.

“We did have the Y4D4 folks come to deliver some student leadership training to our seventh-graders during their summer transition academy,” Claremont Academy principal Ricci Hall said. “The aim of the project was to give students a larger voice in their school and in their community.

“As such we are hoping to empower students to see themselves as community activists and leaders.”

Empowering is good, but it’s far from a static concept. “To me empowerment isn’t about us having this paternalistic idea of helping people and giving them their power,” Esparza says, “but actually working toward a process and being by the side of that community and population, and discovering the power each of us hold within us.”

Definitions aside, Hall sees the benefits of the lesson and the group. “Over the years we have had some of our students join Y4D4, and it has been a powerful experience for them,” he said.

It has been a profound experience for Esparza, who says her mentoring role “has been very humbling. I learn everyday from the youth we work with.”

She is no stranger to the impact of youth development. Having emigrated from Ecuador at 16, leaving her parents behind, Esparza assimilated to living with her aunt and uncle, and graduated from Holy Name Central Catholic High School. From there ‒ before transferring to Clark ‒ she earned a significant scholarship to Worcester State University, where she discovered the Latino Education Institute.

“Ever since I started college I was involved in different organizations throughout the city doing youth development work,” she said. “I am a product of youth development. Having those mentors (at LEI) and those voices and those people who really believed in me are the reasons I am who I am, and so I want to give that to other youth in our community.

With its latest endeavor ‒ a focus on food justice and educating indigent populations on healthy eating ‒ Esparza and Encarnacion-Rivera hope the group is raising the bar. Indeed, this is clearly no ordinary after-school club.

After a recruitment process that included promoting the Y4D4 agenda at schools in the district and through various youth-serving agencies, candidates were asked to complete written applications that were scrutinized by a half-dozen mentors. The teens who passed muster were then put through individual and collective interviews, the group session focused on measuring the candidate’s ability to develop and implement an action plan for a hypothetical initiative.

“District 4 is a very diverse section of our city and a lot of those voices are not represented when it comes to politics, so that’s one of our biggest objectives, to really create those spaces where those voices (can be heard).” Katherine A. Esparza

There are 13 youths, from 15 to 18, joining Esparza and Encarnacion-Rivera in conceptualizing, promoting and implementing Y4D4’s second major initiative. The diversity of the group ‒ all people of color, nearly evenly split between male and female ‒ is neither a coincidence nor an accident.

“That’s something we’re very intentional about. District 4 is a very diverse section of our city and a lot of those voices are not represented when it comes to politics, so that’s one of our biggest objectives, to really create those spaces where those voices (can be heard),” Esparza said.

“Our council really embodies that, so it’s really great because we have all of these different perspectives and access to different communities.”

This group of diverse, like-minded difference makers will now set its sights on helping the less fortunate and the underserved gain access to affordable and healthy foods, items that are hard to find as you walk by Crystal and Gates streets, past St. Peter’s church, Hancock and Hawthorne.

Wendy’s and McDonald’s? Sure, Main South has those, and a handful of ethnic markets and assorted convenience stores, too. A full-fledged supermarket? Try Price Rite on Southbridge Street or the Price Chopper at the end of Cambridge.

For the single parents and/or the folks who work multiple jobs to make ends meet, “Sometimes the most convenient option is to get a Hot Pocket,” Esparza says, “and that’s not necessarily the healthiest choice.”

The pursuit of food justice is one prong of the group’s push to advocate for a more “green” infrastructure in Main South. “We really would like to see that in our neighborhood as well, not only in the wealthiest neighborhoods,” Esparza said.

Y4D4 joined forces with the Regional Environmental Council of Central Massachusetts and its YouthGrow program to begin planning the initiative. REC operates community gardens and regular farmers markets in Main South and surrounding areas through the summer.

The plan, Esparza says, is to continue establishing relationships with community groups and city leaders; and to potentially secure grant funding ‒ a first for the all-volunteer organization ‒ with the help of REC. Y4D4 expects to be able to roll out its food justice action plan and curriculum by next summer.

In the end, it’s as much about fostering a sense of pride and responsibility in the community. “It’s important because we’re very neglected and that’s very frustrating,” Esparza said. “There is no time for active political participation … when you have to survive.

“What are you going to do about it? Are you just going to yell and be mad and angry about it? How do you channel those emotions to create that change? For us, education is that.

And a chance to make a difference.

“I think a lot of people say, youth are the future of our world. I don’t believe in that,” Esparza said. “I think that youth is our present, because the reality is life is in the present. It’s about now.”