Someone has an identity crisis.

Is J. Stuart Esty a 21st century entrepreneur taking advantage of social media to promote his products by asking his friends to fund his flavorful business venture?

Or is it Dr. Gonzo, the mad creator who toils in the garden, who mixes and blends the ever-evolving varietals of organic sauces and fixin’s that will cure whatever ails you?

Unlike Dr. Jekyl and Mr. Hyde, they live harmoniously day and night.

Esty, also a multitalented musician who plays in the Roadkill Orchestra, admits there is no dividing line between Dr. Gonzo and J. Stuart Esty. In both jobs one has to be pitching the product all the time.

Last year Esty said he tried to raise $75,000 to stockpile product and get the company up and running. Initially, he thought it would be easy. 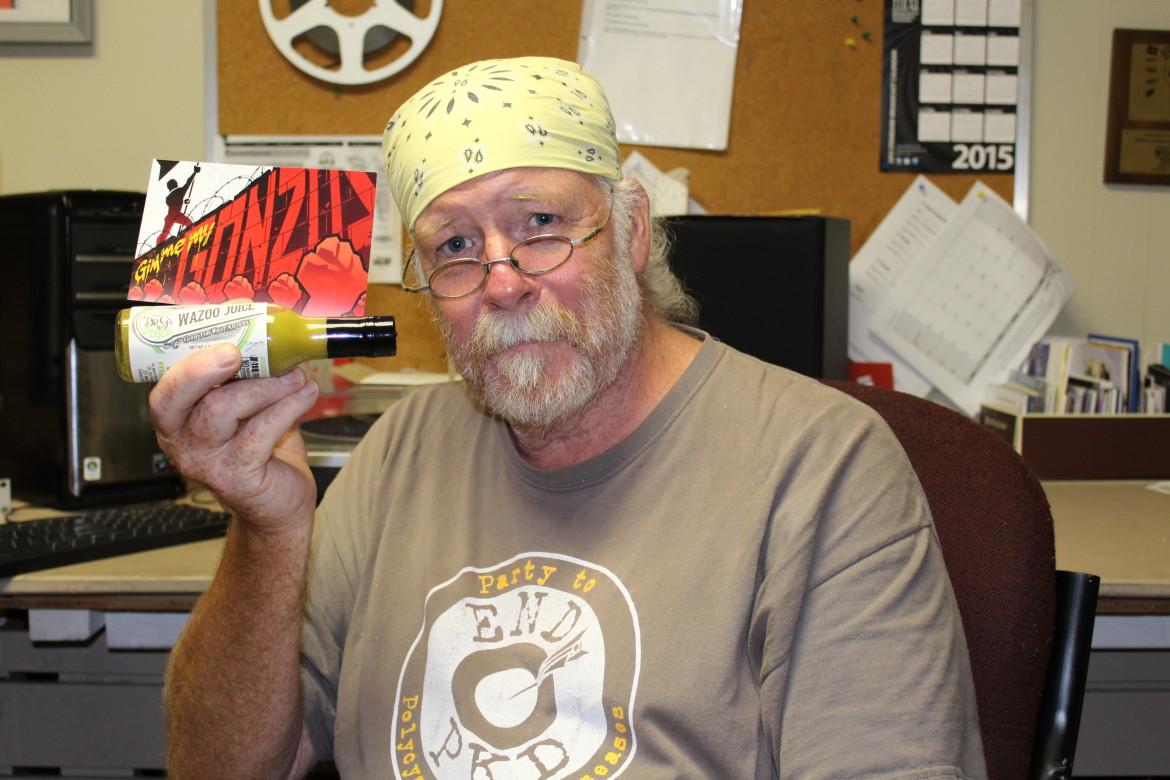 That effort yielded nearly $20,000, which did provide a cache of products that can already be purchased. Now, he’s pitching his homemade, organically grown products to friends near and far, hoping to raise $25,000 in his latest Kickstarter campaign, which ends Oct. 3. This cash will go toward making the next generation of tasty products for the palate. As of Sept. 11, there was $3,607 pledged.

“We’re about six weeks behind schedule,” Esty said, “but that’s not too bad with kickstarting. We just shipped out 350 packages to people. So, with the infrastructure we have in place, the turnaround time won’t be two or three months, it will be two to three weeks. We’ve got new labels, and packaging designs have been done by local graphic artist Derek Wing.”

He added the product codes are done and the nutritional package information is ready to go, too.

By Thanksgiving, he said he expects to have at least 12 products, which will carry through Christmas.

“On Jan. 1, we’ll start the next one and go to Jan. 31, with the following five products coming out for Easter – things that will go with your Easter dinner. Then when that one is done, we’ll do one more batch of four or five products before the Fourth of July.”

Kickstarting and crowdfunding have grown exponentially within the last five years thanks in large part to social media. “It’s been a great way to directly reach out to your consumers,” Esty said. “This was my initial premise of my business plan – to bypass distribution channels and wholesale. And because it is produced in small batches, we can go directly to our customers and have national presence online.”

Esty started his gardening experiments in the mid-1990s purely out of selfish reasons. He said six of his close friends who were passionate about homebrewing their own beer would have parties every weekend. “So I had to bring something to the party, if I wanted to have some beer.”

He also received a lot of help from Ralph Moberly of Ralph’s Rock Diner, the Grove Street establishment. Ralph would serve Esty’s creations on different foods from the kitchen and “test” it out on his customers.

“Ralph was the best marketer of my products and was very passionate about it,” Esty said.

Most of all, he learned new techniques and saw how customers used his products. “I learned so much from them over the years,” J. Stuart Esty said.

Since his homebrew friends liked the sauces he made, Esty decided to hit the barbeque trail, fairs and festivals shucking his wares like an Old West medicine man. That was Dr. Gonzo, who had to be “on” at all times.

After being on the road for eight years, gas prices close to $4 a gallon, and being a prisoner to the whims of New England weather, he opened Dr. Gonzo’s Emporium of Uncommon Condiments Inc. at 122 Main St. in Worcester.

The Emporium created foot traffic to a then-desolate sidewalk. Esty said people drove from five different states (including New York and New Jersey) for the monthly extreme grilling challenges. The grilling competition was held rain, snow or shine every week. People shared their recipes and Esty said he was able to put out two cookbooks.

Most of all, he learned new techniques and saw how customers used his products. “I learned so much from them over the years,” he said.

But the store closed about four years ago and the search for new and larger markets was on.

“It’s been an interesting ride,” Esty said, commenting on his humble beginnings with a backyard garden on top of Vernon Hill, between two three-deckers.

“The sun would hit the garden and also warm up the retaining wall. At noon it would warm up the side of the garage and then the sun would pass over and reflect off the white three-decker on the other side.

“So my wife and I were planting before Memorial Day and picking after the second or third frost – all kinds of vegetables, peppers and we were putting out a salsa with garlic, which was extremely hot. So that’s how it started,” he said.