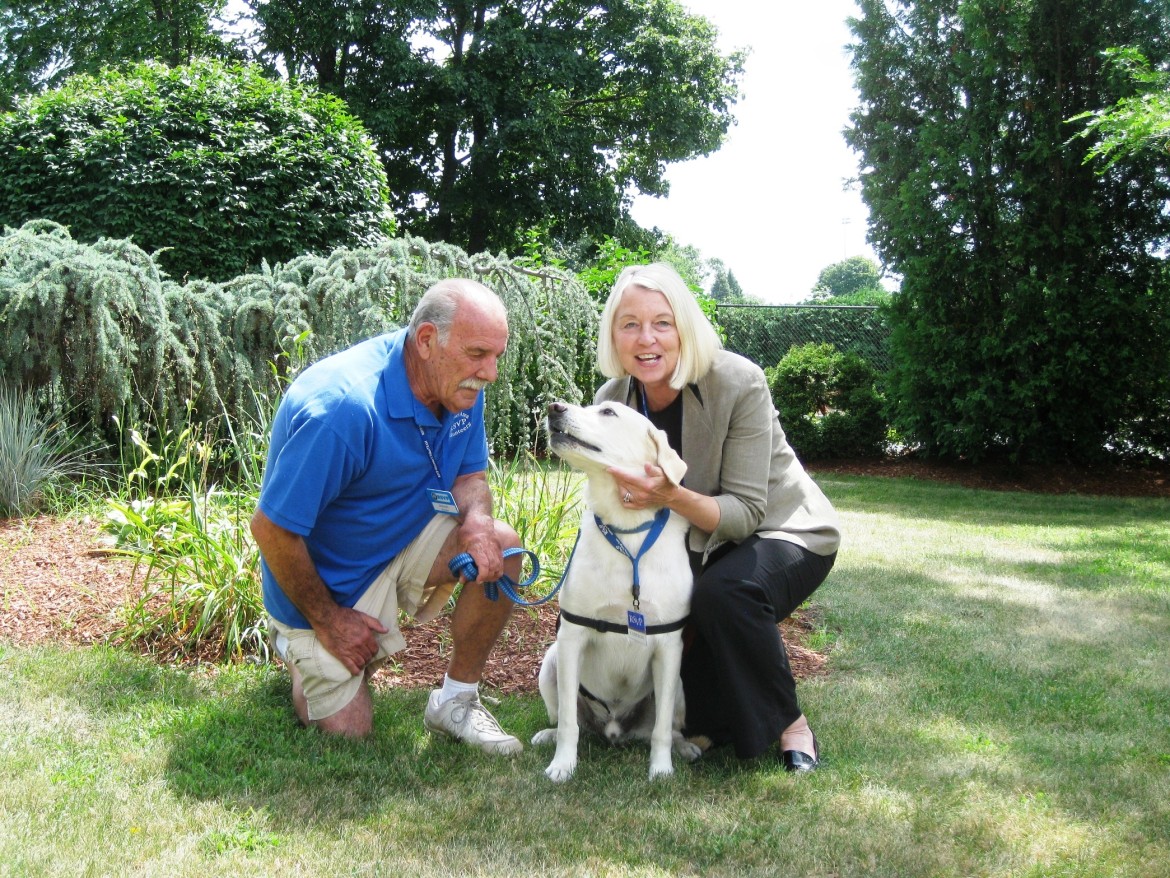 WORCESTER  —  Cameron is quite the fellow at the Worcester Senior Center on Vernon Hill.

Those who use the cozy Providence Street facility say Cameron  —  with his considerable charms, talents and cuteness  —  owns the place.

When he visits, he often is warmly and cheerfully welcomed with an embrace, hug or handshake. He is so liked that many of the center’s regulars share their snacks with him.

The admiring folks who hang out at the facility noted that Cameron can even put a smile on the faces of people having a dreadful day.

But that’s what he’s supposed to do. He’s a goodwill ambassador and a member of the RSVP Worcester Area Volunteers organization.

Lorraine and Joe Monfette of Worcester are the actual members.

Cameron is an 8-year-old yellow Labrador retriever and he belongs to the Monfettes. 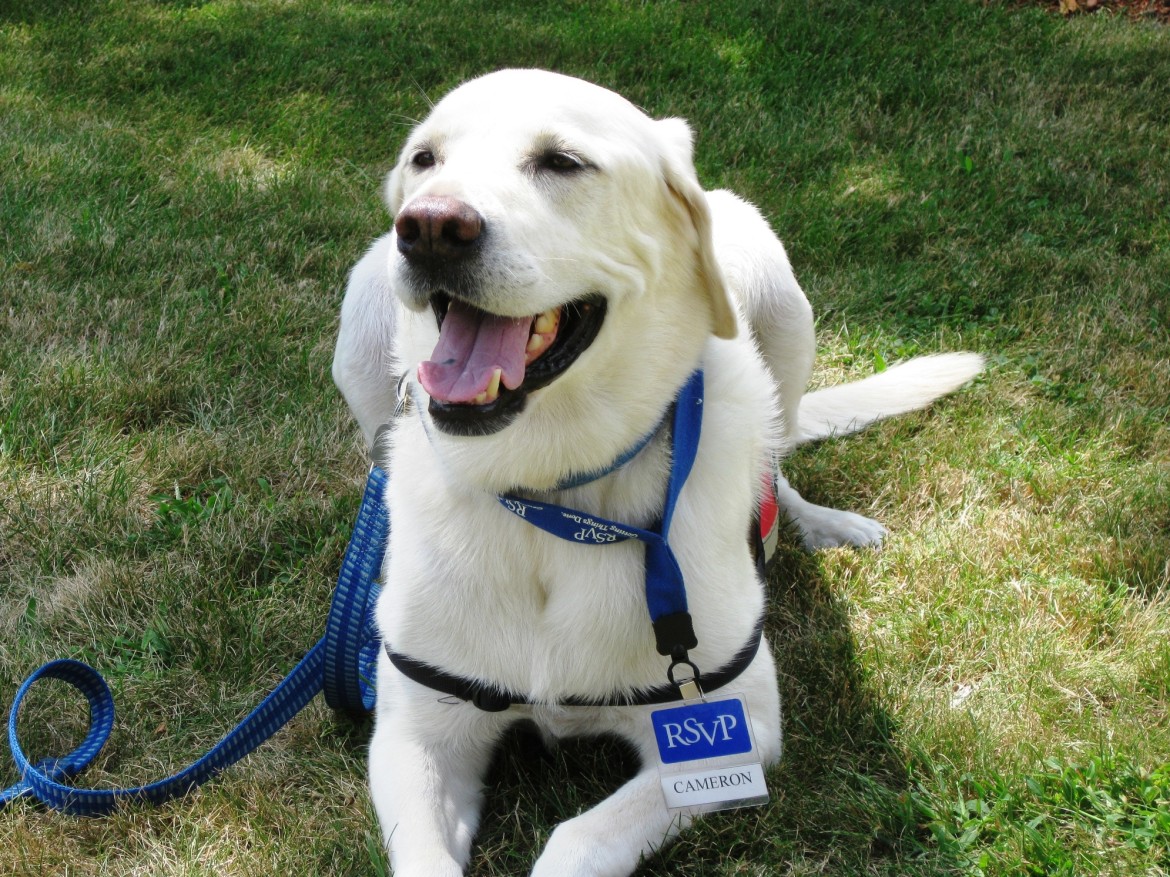 The well-mannered and trained pooch is a therapy dog. It is the canine’s job to lift spirits and to offer some love and companionship to the lonely.

“We’re a team,” said Joe, 75, a retired maintenance worker with YOU Inc.

While some retirees take up golf or other new hobbies, spend more time with their grandchildren or use their “golden years” to travel, others seek out volunteer tasks that use their talents to give back a little to the cities and towns where they grew up.

It’s estimated that volunteers with the organization, statewide, contribute tens of thousands of hours of service annually, thus saving the communities they serve about $1.6 million a year.

In the Worcester region, the organization offers volunteer help to about 70 nonprofits, including eight schools.

Officials said their organization provides opportunities for seniors to learn new skills, meet others, and make a difference in the community.

Because of the baby boomer generation, that demographic is expected to spike considerably. Federal officials predict that age set will reach 83.7 million in 2050.

The “graying” of the United States is expected to have some negative economic repercussions on the country. Some believe, though, that the growth in an older population can be beneficial, with willing seniors able to provide their skills and experience to help society.

The volunteer opportunities offered through RSVP are plentiful and varied. When needed, training and work materials are provided. In some cases, volunteers are offered reimbursement for their travel.

RSVP members recently provided “special packaging” for 500 bears and other stuffed animals for a local veterans support organization. The toys were distributed to needy veterans who used them as gifts for their children or grandchildren.

Once enrolled in the RSVP program, individuals are matched with postings that need filling at partnering agencies.

“We offer comprehensive opportunities. There are a lot of different things that people can do. Other organizations focus on one or two things.” — Barbara Drapos, RSVP Worcester program director

RSVP, whose offices are located at the Senior Center, is funded by the U.S. Congress through the Corporation for National and Community Service. The CNCS is one of the largest organizations in the nation that provides grants to support nonprofit groups promoting volunteerism.

RSVP also is sponsored locally by Family Services of Central Massachusetts, which, in its role, is responsible for some of RSVP’s management and oversight. FSCM has been helping area families since 1889.

Drapos said her organization is different from similar agencies because of its extensive and diverse volunteer opportunities.

For example, she said that volunteers can grow vegetables at the Community Harvest Project in Grafton or serve as a dispatcher for Rachel’s Table.

“We offer comprehensive opportunities,” she said. “There are a lot of different things that people can do. Other organizations focus on one or two things.”

Drapos said RSVP’s volunteers are just ordinary people, like the Monfettes, who want to share some time to help others.

The volunteer “bug’ first bit Mrs. Monfette, who had worked at Stop & Shop and the old St. Vincent Hospital complex on Vernon Hill, a few years ago when she volunteered at the Senior Center’s computer laboratory. She later became affiliated with RSVP.

“Joe was always a doer,” Lorraine said. “When he retired, I gave him some time to get used to not working. Then I got him up here (RSVP).”

Cameron got into the picture a little while back.

The dog was adopted from a local animal shelter when he was about a year old.

He often joined the Monfettes on visits to the Senior Center and it was Drapos who suggested that Cameron get his paws dirty. 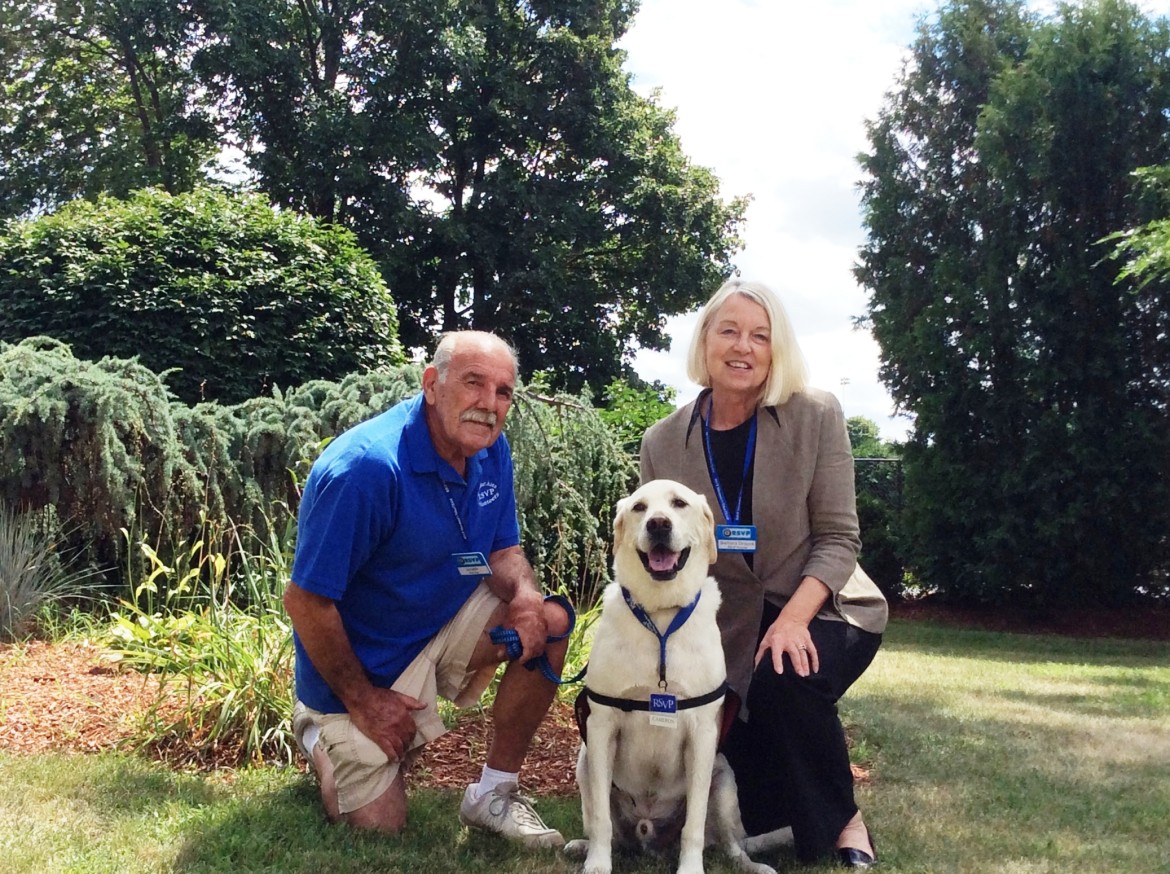 “He (Cameron) just has a way with people and he can offer a little companionship to those who need it,” Drapos said.

With help from the Pets & People Foundation, a national organization, the Monfettes trained Cameron and got him certified as a therapy dog.

The animal, for example, knows how to get around walkers and wheelchairs and is not startled by an unexpected pat on his soft coat. He can work with individuals with dementia or Alzheimer’s disease.

“People just love him,” Joe said. “When he sees someone he knows, he’ll wag his tail. That’s important to the person.” 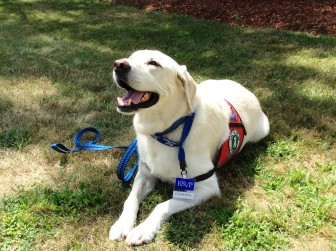 During a recent visit to the center, Cameron greeted an elderly woman who had some difficulty walking.

“What a well-behaved dog,” the woman said with a smile on her face.

Besides the Senior Center, Cameron and his family visit nursing homes and other elder care facilities in the area.

Drapos, meanwhile, said she hopes volunteers like the Monfettes will attract others to RSVP.

“Volunteerism today is part of a healthy lifestyle for the retired,” she said.

This article was originally published in the Aug. 23, 2015 edition of the Sun.