WORCESTER — The members of the Hadwen Park Congregational Church had just finished a rousing rendition of “God of the Ages, Who with Sure Command” when they were asked to join hands and form a large circle around the house of worship’s sun-drenched sanctuary. 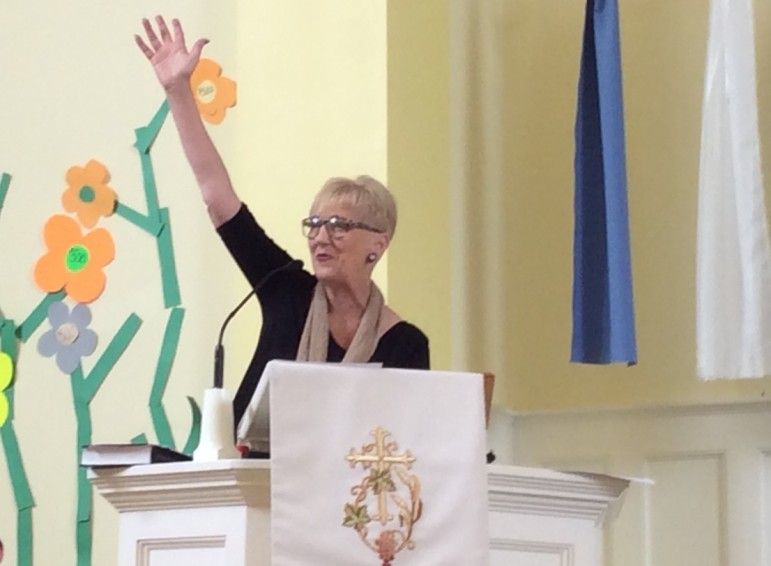 “In the Congregational life, we all come together,” explained the Rev. Judy Hanlon during the church’s 10 a.m. service on a recent Sunday.

For Doreen, the bonding, fellowship and feeling of inclusiveness brought about by the gesture was not merely symbolic.

It was very real.

The young, lesbian Ugandan had fled her native land a few years earlier because she was tortured and persecuted, she says, for her sexual lifestyle.

“This is where I want to be,” said Doreen, a shy smile framing her words.

Doreen is one of dozens of politically oppressed gay and transgender individuals from overseas who have sought refuge in the United States and have received support from the LGBT Asylum Support Task Force since its founding in 2008.

Four years earlier, Pastor Judy, as she’s known, had spoken at the State House in favor of marriage equality.

“I became known as a Christian pastor who believed that LGBT were born that way,” Rev. Hanlon said. “Thus, four years later, Linford Cunningham, a Jamaican Christian gay man, was talking to (an attorney) in Worcester and extremely upset about his housing and his food, plus how God viewed LGBT persons, because pastors in Jamaica told him he was a demon.

“Our goal is to assist any way we can. These people really have no one to help them,” Pastor Judith Hanlon

“Then his attorney called me. She remembered me due to my public stance on marriage.”

Rev. Hanlon and her pastoral flock are credited with creating one of the earliest, if not the first, lesbian, gay, bisexual, and transgender asylum advocate groups in the country.

“Our goal is to assist any way we can,” Rev. Hanlon said. “These people really have no one to help them.”

The Hadwen congregation, in the southwestern corner of Worcester, has welcomed about 100 people from some 16 countries, all seeking legal sanctuary. Besides ushering them along the path to asylum, the church has helped these individuals, many of whom are indigent, find housing and other support.

In many countries, employment, housing and other forms of discrimination are the least of the problems facing gay and transgender individuals.

Several nations — 88, per the task force’s website; nearly half of those in Africa — have laws that criminalize or target homosexual activity, some of them unimaginably harsh: life imprisonment, “corrective rape,” or in 10 countries, according to a 2014 Washington Post article, the death penalty.

(A 2015 report from the International Lesbian, Gay, Bisexual, Trans and Intersex Association counts six United Nations states, two provinces and a vigilante-held area where LGBT folks, mostly men, could be put to death.)

Some of the persecuted who are allowed to live are jailed and brutally tortured or mutilated. In other instances, officials allow vigilantes to mete out harsh justice.

The dangers that gays face in these countries were brought to the international forefront before, and through, the 2014 Sochi Winter Olympics. Legislation signed by Russian President Vladimir Putin in 2013 banned the promotion of nontraditional sexual relationships. This was seen by LGBT advocates as an overt attack against homosexual and transgender lifestyles. The effort threatened the Games and generated an outcry from human rights groups worldwide.

In many cases, individuals have been disowned by their own families and have even been turned over to the police by their parents. For some, the persecution and torture were so bad that, in seeking refuge, they left their children behind.

Once precedent was established in 1994 in the Matter of Toboso-Alfonso, the United States began offering asylum to LGBT immigrants. The process, however, is complicated and time consuming. And, according to a June report from the Center for American Progress, the work of Hanlon’s group provides critical support.

Indeed, the report states: “recognizing the right of LGBT people to access the U.S. asylum system is only the first step. More must be done to ensure that this right can be exercised meaningfully.”

The task force estimates it spends $4,000 a month to help each asylum seeker.

That’s where the task forces come into play.

Rev. Hanlon said her organization helps asylum seekers find shelter and offers financial assistance. Group members also assist the victims in navigating the legal morass that stands as a significant hurdle to the asylum finish line. Time is of the essence — “LGBT asylum seekers are disproportionately affected by the one-year filing deadline,” the CAP report contends — and an organized, well-supported effort is crucial to obtaining asylum.

The task force estimates it spends $4,000 a month to help each asylum seeker.

The United Church of Christ-affiliated Hadwen congregation’s spiritual home is set inside a white clapboard church located at 6 Clover St., near the Worcester-Auburn line, a bucolic New England landscape in every direction accentuating the sense of safety and acceptance.

“When entering our sanctuary, you will be greeted with a smile, an extended hand, and (you) feel the love of Christ surrounding you,” noted a recent church bulletin. “Here you are a stranger but once.” 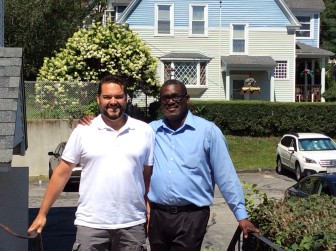 Today, local volunteers under Hanlon’s leadership work with about 10 individuals. Since 2008, the task force has helped 24 people to secure asylum in the United States.

“The societies in our countries do not accept us,” said O’Neil, a gay Jamaican who is studying to become an American citizen. “The thinking of our peoples and our governments has to change.”

Many homosexual, bisexual and transgender individuals flee because they have no one to support and protect them.

Doreen, for example, left Africa after her parents reported her to the authorities. The 25-year-old, who had a secret girlfriend, was forced into a marriage with a man she did not know, never mind love.

Her husband searched for her until she left Uganda. For a while, Doreen lived on the streets.

The Rev. Anthony Musaala, a Roman Catholic priest who since 1999 has been working with homosexual Ugandans who have fled into nearby Kenya, said anti-gay sentiment is ingrained in many cultures.

Father Musaala, who is gay, said the negative attitude toward gays is often fueled by the rhetoric of strict evangelicals. According to the priest, several prominent conservative American churchmen visited Africa in the late 1990s to stir up resentment against gays.

“They preach to Africans that they don’t want to be like the depraved Americans. They pushed the whole Sodom and Gomorrah thing,” said Father Musaala, who is visiting the United States to garner support for the refugees in Kenya. “The churches have a great impact on the thinking of the people.”

The priest said that things in Kenya aren’t much better for the refugees.

“But gay Ugandans go to that country because they are not known in Kenya,” said Father Musaala, a singer and songwriter who raises money for victimized gays by organizing Gospel hymn-fests. “It’s very easy for gays to become anonymous in cosmopolitan areas like Nairobi.”

He said that about 500 persecuted Ugandans now live in Kenya, where safehouses have been set up for them.

“There are a lot of places where people think that gays are out to destroy the concept of family,” said the priest. “They don’t want homosexuality to become part of the African culture.”

Father Musaala, who said that he knew that he was gay by the time he was 14, has also had his share of problems. He said that his local bishop forbid him to continue his spiritual ministry by suspending him and ordered him to stop his outreach to the gay community.

Father Musaala, who was outed in a newspaper along with about 100 other Ugandans, said he thinks he can win an appeal with Vatican officials but added that he doesn’t have the money to wage a canonical fight.

Carlton, a 25-year-old gay Ugandan, said the support network offered by the task force is vital.

Carlton taught school but was forced to leave his job and his country after his mother-in-law informed authorities that he was gay. “I was very careful not to let people know that I was gay,” said Carlton, who lived for a short time in Kenya before coming to the United States in November. “But things got very difficult after my mother-in-law insisted that I was teaching children how to be gay.”

Carlton, who thought that getting married might hide his secret life, said he hopes to attain asylum status in the United States, like Gilbert, his fellow countryman.

Gilbert, now 49, said he knew it was time to leave Uganda after he returned from his night job as a machine operator at a tobacco company one day in 2011 only to find out that the police had visited.

“A lot of people began suspecting that I was gay when I was about 26 years old,” said Gilbert, who now lives in Waltham. “At that age, the rumors begin to spread because, by then, you are supposed to be married. The culture is very anti-gay in Uganda.”

Gilbert, who was granted asylum last May, packed his belongings and pretended to go to work.

Instead, he went to another area of Uganda where people didn’t know him. With a visa in hand, he later arrived in California while performing with a choir.

“International support, especially from the United States, is important,” said O’Neil. “And the churches have to stop being hypocritical. They really have to follow Jesus’ messages about love. … We need people to stand up for our rights.”

Asylum seekers believe it will be some time before perceptions of them change in their own countries.

“For now, I need to be in a place where people accept me as gay,” said a Ugandan woman from Boston who visited the church on Sunday hoping to get help.

The woman, a Muslim, left four children in Africa.

Her husband had reluctantly accepted her lifestyle for the good of the kids. She nonetheless had to leave because other relatives made her life miserable and precarious. Under Ugandan law, she could have been arrested and jailed for a long time. First-time offenders under the nation’s stiffened legislation face 14 years in prison.

“I just don’t understand it,” she said. “After all, we are all God’s children.” 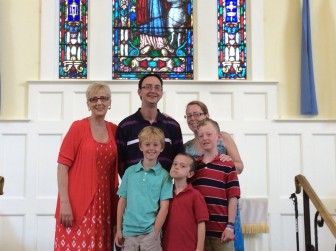 Meanwhile, the volunteers with the task force said their work is rewarding.

Earl Finne, who serves on several church committees, uses his truck to help asylum seekers move their belongings to new homes. He said that he has become “quite close” to some of them.

“The stories they share are sad and painful but also powerful,” said Finne, who is chairman of the church’s diaconate committee. “And they are beautiful souls. So a ride to church or moving some furniture is a way that I can at least help in my own way.”

This article was originally published in the Aug. 9, 2015 edition of the Sun.