“I finished high school with a fourth-grade math and reading level and now I am at a ninth-grade math and reading level. I have my HiSET [high school equivalency; competitor to GED] and I am hoping to find a job when I finish the program,” says Marcus Diaz, a 20-year-old student involved in the YouthBuild program through Training Resources of America.

“Through this program I have learned to do many things and do them better,” Diaz says with an enthusiastic smile as he shows off his newly received equivalency certificate. 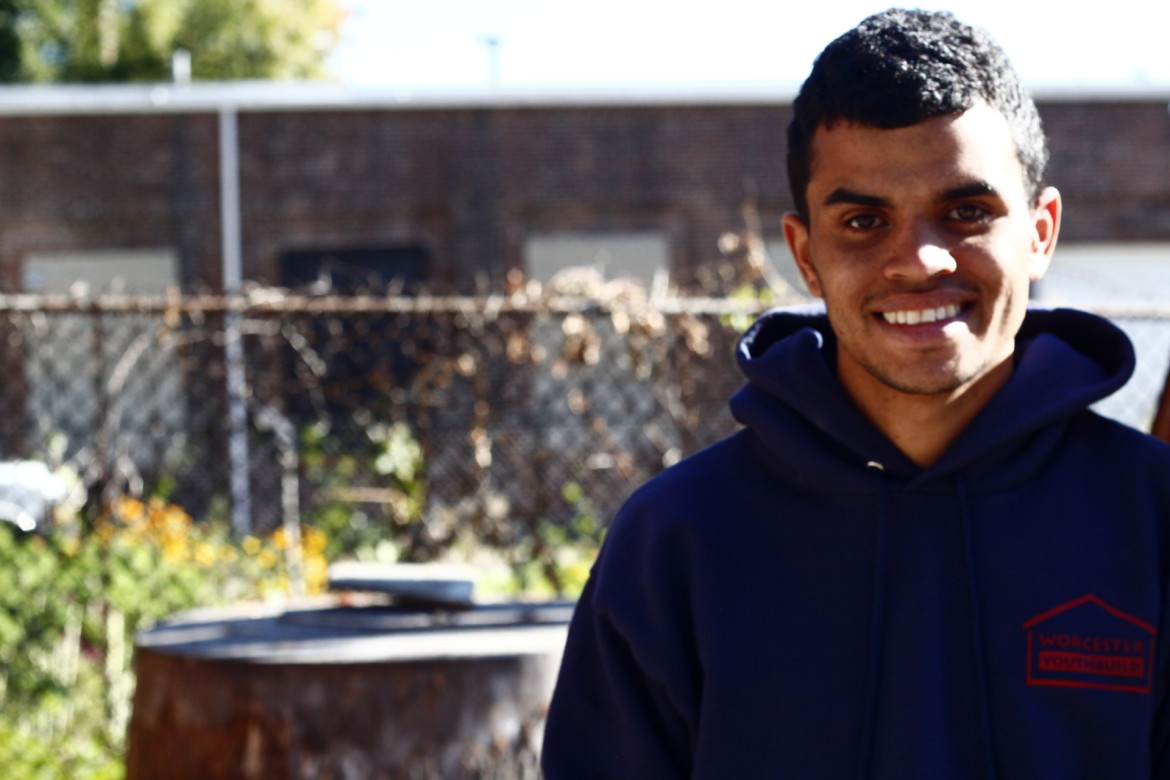 Marcus Diaz, 21, has gained much more than a menial job by working on the YouthBuild aquaponic greenhouse project with Stone Soup and Worcester Roots Project.

Raised in Worcester, Diaz was a student of the Worcester Public Schools and through 12th grade was a part of the schools’ transition program – a program focusing on the lives of special education students beyond the classroom walls.  Students with IEPs are given the opportunity to build transitional skill sets that can transform their adult life into a life full of promise, productivity and high confidence.

But what happens when you give low-income youth the opportunity to gain self-confidence, valuable life skill sets and an abundance of support from community leaders?

Well, you get a group of astonishing kids sparking change in a dire area of the city.

Standing tall, with a high level of assurance, six students work diligently on the latest project presented to YouthBuild by Worcester Roots Project and the Stone Soup collective. The Worcester Roots Project is an organization layered with missions to create a platform for economic, social and environmental justice within the inner city. Partnered with several organizations such as Technocopia, Diggers Landscape Cooperative, WPI’s IQP teams and Green Revitalize, Worcester Roots has established a pilot project with the mission to build a cooperative business and enhance the livelihood of Worcester’s youth.

Although the project has received funding from UMass Memorial Community Benefits, New England Grassroots Environment Fund, The Stoddard Charitable Trust, The Fletcher Foundation and the George F. and Sybil H. Fuller Foundation, the project will need to maintain its funding consistently. The organizers have created a crowdfunding campaign at YouCaring.com in efforts to raise additional donations for the ongoing project and potential expansion into other areas of the city. 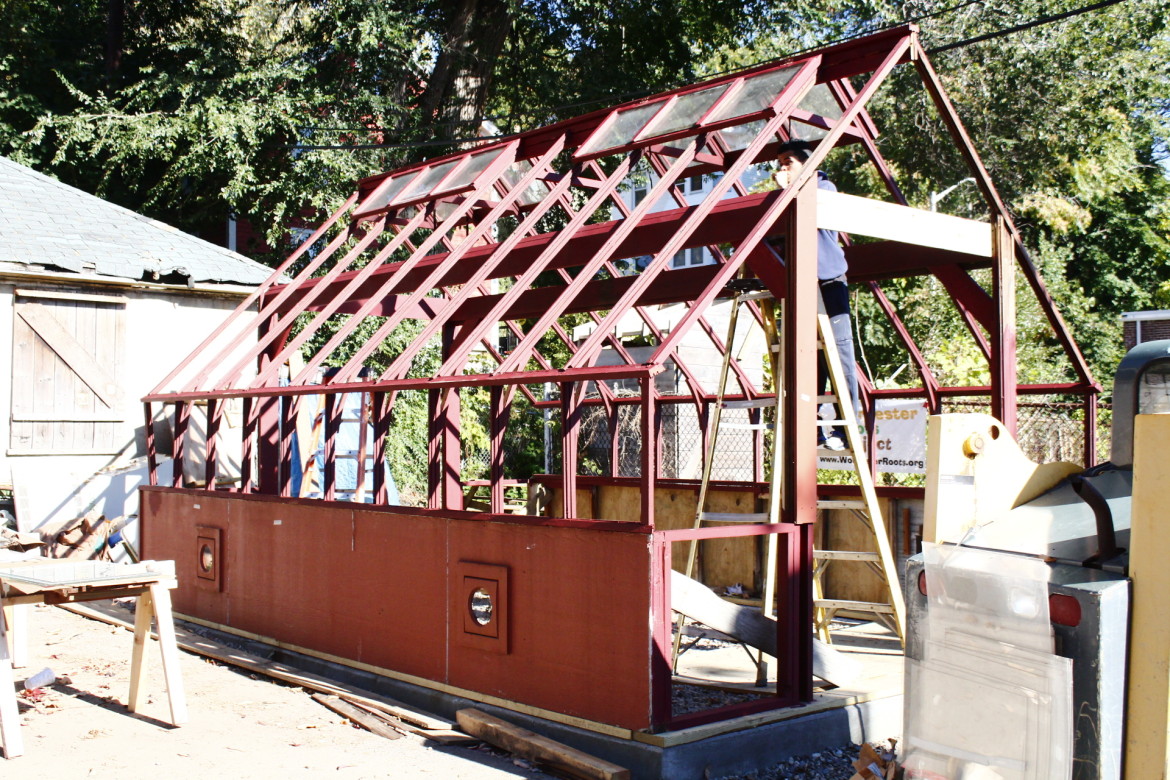 “This greenhouse will increase the knowledge, awareness and investment in healthy food options for Bell Hill area residents and Worcester youth,” says a Stone Soup pamphlet.

They strive to mold the co-op business model into a system that will allow for the growth of an aquaponics greenhouse – a growing system that mimics a natural symbiotic relationship between fish and plants. Harvesting produce and fish without the need of fertilizers, it maintains an eco-friendly structure also through its recycling of water, allowing the system to use 90 percent less water.

Coupling students in search of high achievement with an innovative project such as the Aquaponics Greenhouse has transformed the atmosphere of the Main South area into a green space of tranquility, prosperity and hope.

“This greenhouse will increase the knowledge, awareness and investment in healthy food options for Bell Hill area residents and Worcester youth. It will advance Stone Soup’s offering of community resources that improve our neighborhood and Worcester, as a crucial part of our mission is creating economic self-sufficiency through the building of democratic workplaces, green jobs and community ownership.” This statement graces the back of pamphlets given out to the community and partners involved in spreading awareness of the benefits of the co-op. 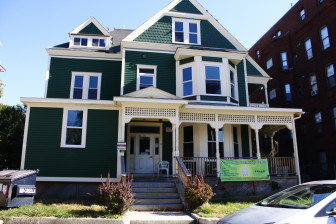 Set behind Stone Soup, 4 King St., the Aquaponics Greenhouse has broken ground and the project is fully under construction.

The six students take part in every facet of the project. Creating the space, measuring dimensions and utilizing the skill sets taught through the YouthBuild program, these students are showcasing their appreciation for the support they have received over the past two years. Their participation in building a community innovation has boosted their morale, self-worth and overall outlook on their future and the future of their community.

Cyrille Tiako, 21, of Worcester, smiles as he expresses his gratefulness for YouthBuild and his excitement over being a part of the Aquaponics Greenhouse. “This project has taught me more than I ever thought I would learn,” he says, while scraping the windows to fit into the perfectly fitted frames of the greenhouse. A native of Cameroon, Tiako explains that his family moved to the United States in search of opportunity.

“My parents moved here two years ago and we didn’t even know English. Now, I speak English well and my two older sisters are studying in higher education. My parents work but work part-time jobs to help the family. I help also with the household chores and cooking to contribute to my family. Being a part of YouthBuild and the Aquaponics Greenhouse has been great. I have learned so much and am looking to start my first college semester in January of 2016 at Quinsigamond Community College,” Tiako says. 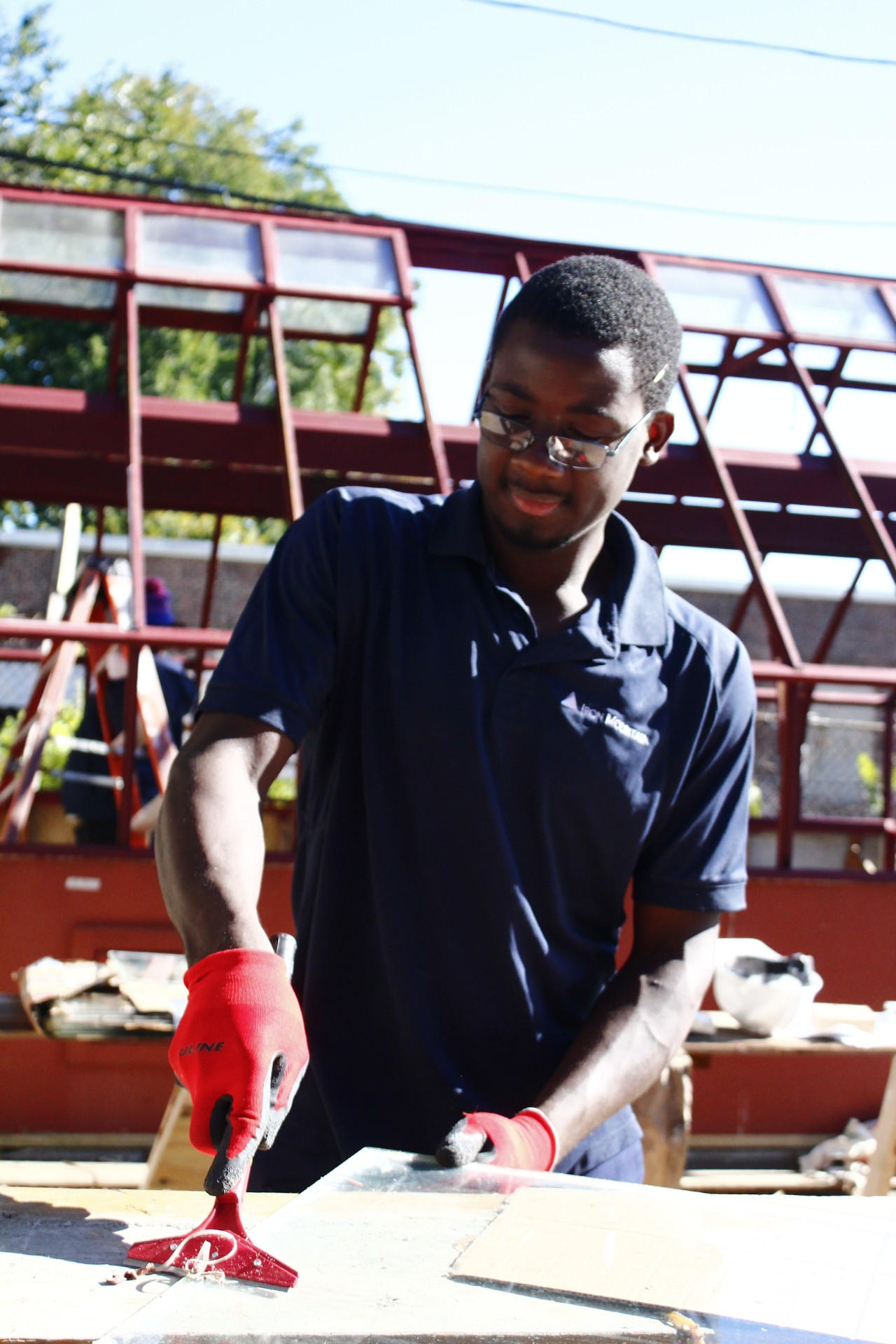 Cyrille Tiako, 21, says, “this project has taught me more than I ever thought.”

Proud of his achievements and contributions to a project that upholds the very meaning of community through its partnerships, co-op business model and dedication to the socioeconomic upbringing of the Worcester community, Taiko is convinced that the project will shed a light of positivity through the community, and hopes it opens the doors to the addition of other green spaces in the city.

“These kids are special. Not only have they received their HiSET, completed our mental toughness program at YouthBuild but are also taking pride in their community and their abilities,” says Michael Quigley, manager of YouthBuild. “When Stone Soup is in need of volunteers and help in their projects, they do not have to ask us twice. We help Stone Soup and Worcester Roots to cultivate these projects and implement the same missions we have at YouthBuild – to enhance the quality of life in the city.”

The aquaponics greenhouse will be the first greenhouse accessible to the community in the city of Worcester, since the demands for a green space became apparent in 2007 among Stone Soup members, greenhouse co-op members and community gardeners. While providing on-site training for the students of YouthBuild, they are also providing a structure to fill the void in the inner city.

The completion date is expected to be soon, after a five-month process of feasibility study, greenhouse design, fundraising, construction and solidification of the project.

If you are interested in donating to their mission to create a greenhouse that will provide more than healthy foods and a workplace for community residents, take a look at their YouCaring page.