[Editor’s note: After escaping a rebel attack on a bus and then disguising himself in women’s clothes to escape villagers in Basse upset with an article he wrote regarding their bad bread, Augustine Kanjia found himself in a village where he is allowed to teach. It is February 1994. Despite warnings not to write any more, Kanjia got himself in hot water with another article. This is the third installment of his story.]

It was dark and I was quite hungry, but the sun continued to shine on patches of high lands of the village. The village looked like a town, but it was full of trees and potholes. Mosquitoes and rodents were abundant. 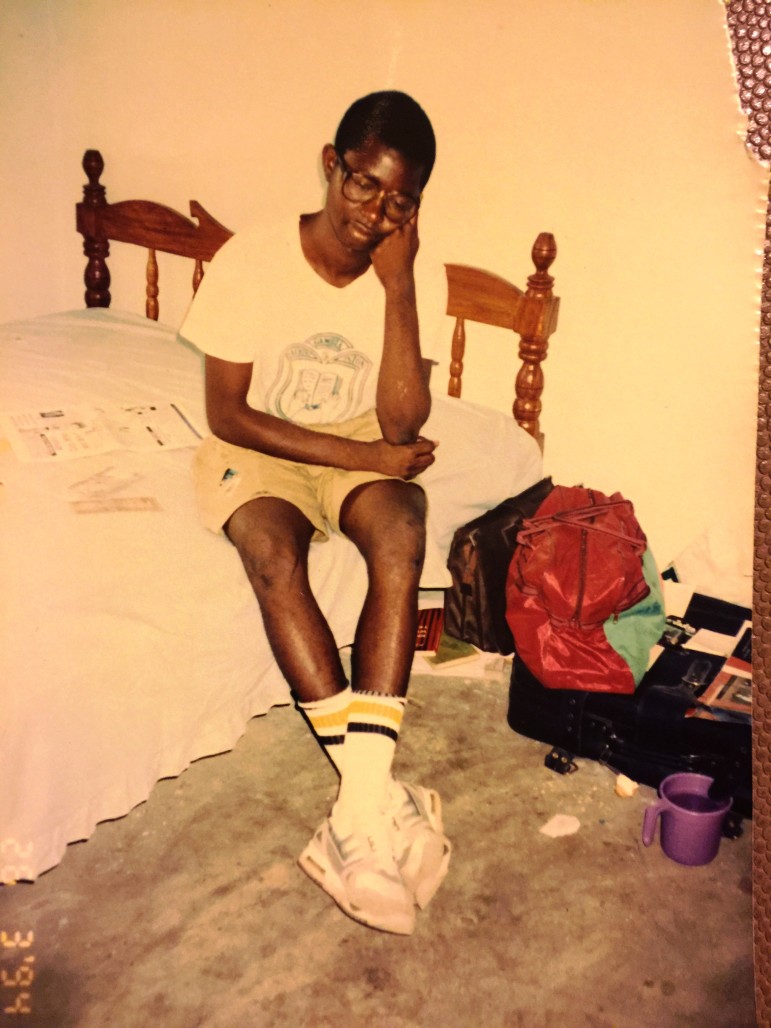 I had no extra clothes, neither did I have money to live on. As I walked thinking of my home and how I could not see my grandmother, on whose account I nearly lost my life, I burst into tears walking alone on a lonely path.

Birds reminded me of my home once more, but the sound accompanied good food cooked by my grandmother who brought me up. I saw a crowd on a soccer pitch. It was late, but I was tempted to show myself to the village boys then make friends.

I was too hungry to even run and I had no soccer gear, so I stood by a young man whom I engaged in a conversation. His name was Tombong Swaray. He was a student in one of the Muslim high schools. Scratching my head, I called his attention to how badly the other team he was opposing were playing. My accent intrigued him and he started posing questions about my home.

The game had tension, and it was heating up. My newfound friend was absorbed into the game and continued to pose his questions once in a while. I tried to explain where I was coming from, but he was taken away into the match.

I called him out in time to let him know that I was going to a town behind the Gambian capital city of Banjul, but it was a little late, and I asked if I could stay overnight with him till the next day, then leave.

“Oh, that will be wonderful. I have my math teacher who is a Sierra Leonean. He came here during the war and his family was burnt alive in their home,” he said. “I love all Sierra Leoneans.”

The match was up, the winning team sang aloud trying to discourage their opponents. My friend lost the match. We had to brood over the loss before we spoke sense to each other. I was patient.

We left the pitch slowly as he pointed and blamed the referee. He did not trust this fat referee from the onset. We met some of his friends from town, who were also very happy to see me.

He was a kind young man full of vitality. We talked the whole time while in bed. I waited for the opportunity to let him know why I had no bag, no document and had nowhere to stay. He was astonished and sounded helpful. We slept, and he left to catch the bus for his school.

I had no clothes to change the old ones. I bore it hard and stayed home. I was introduced to his stepmother, Haja Touray. She did not speak English; Mandinka was their local dialect. I had just started learning the language. I told them to be merciful when I talk to them in Mandinka. I had a very big welcome from his family.

We had our dinner and questions came from all over the place. Some I could hardly ignore.

It was time to come clean, because soon in the morning all the children of my age group would be leaving town surreptitiously, like Nicodemus by night. When everybody had gone to bed, I made sure I explained to Tombong Swaray. He was a kind young man full of vitality. We talked the whole time while in bed. I waited for the opportunity to let him know why I had no bag, no document and had nowhere to stay. He was astonished and sounded helpful. We slept, and he left to catch the bus for his school.

I was alone and his mom asked if I was returning home that morning. “No,” I said in haste. “Tombong knows why I am here. He will tell you.” But the mother, Haja Touray, did not understand English and I could understand some of the Mandinka they spoke.

My friend came home in the evening and did not waste time to search for a house for me. There was a house with an unused room that was not far from where my host lived. I went to the Catholic Mission to take my salary to pay for the room. It was a tiny room with dust all over the place. It was actually a store for old house materials, one could see the sign of rodents. Moving the trash was like moving the rodents’ kingdom. We finished with cleaning up, and my major problem waited unabated. There was no bed, no chair, no pot to cook, nothing to call a utensil. I bought a foam and mosquito net. I placed it on the dusty floor. I spent the whole day indoors when my friend went to school.

Amie Manneh, a short, beautiful girl who had stood by me while in Basse, was quite helpful when the newspaper article caused an uproar and put me into hiding. She showed me interest and I did not resist. She appeared one day like a dream. She was a complement for a few days.

One evening, I saw a big police truck with the girl in front of them looking out for me. I noticed they were coming toward my house, which was unusual. I ran quickly behind the house, leaving the door open, and went and hid myself in one of my new friend’s mother’s room. They knew what was happening, so they closed their door and pretended I was not around. My friends did not say a word.

The girl went with them and never came to my house anymore. It was her boyfriend who had brought police to apprehend me because I was a nuisance journalist bent on spoiling their good name and for taking his girlfriend.

I had a meeting with my spiritual adviser one evening before schools reopened. It was fruitful. We concluded that I forget about journalism to concentrate on teaching. I had earlier on studied the art of teaching for three years, so I was fully prepared to take the challenge.

The Catholic Mission posted me to an elementary school behind the Gambia River. It was good for me because Basse, where I had my first trouble, was so far from Njongon, where I was going to call my new home.

Meanwhile, the trouble in Sierra Leone kept escalating and my grandmother, who brought me up, and a few of my uncles were killed.

My mother had died long ago, so there was no worry. My sisters and brothers were all in disarray, some running to Liberia, and some to Cote d’Ivoire (Ivory Coast.) It was simultaneous. Rebels were raging in my home because of diamonds, and I had been tossed from place to place, making me think about my home deeply. 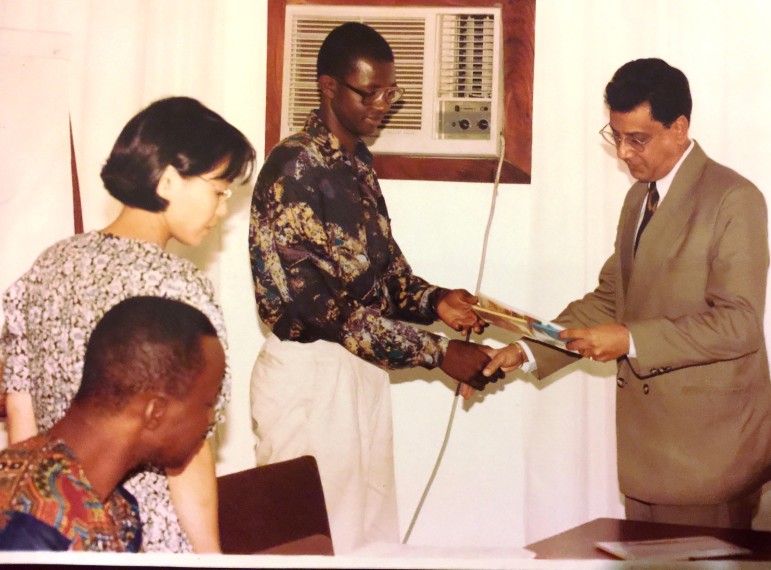 Later in 1994, Augustine Kanjia accepts and award for photography from UNICEF.

I thought I was going to be a free man while teaching, but the news of my being a journalist and the damage I caused in Basse with my first article put my new school on alert.

The school had a special meeting to warn me and gave me their school’s policy with the media.

No teacher was allowed to write an article for publication without the approval of the education secretary. I kept calm, because I wanted to stay on in the village before I was kicked out. Within two months, my hard work was seen and the teachers teamed against me. I was then transferred to a middle school to teach in the center of the city at St. Therese’s Middle School. That was in the heart of where things were happening. I liked it.

My attention was drawn to very pertinent news, and I could not follow my adviser’s suggestion to stop writing. I spoke to him and asked if I could use a pen name to do my stories. He said it may be dangerous too if you are caught some day. I did not relent.

Emil Kujabi put me in his black book, waiting to see my complete downfall. They sent out a communique forbidding teachers from writing for the press. I did not use a pen name, either. I stood by my name. Stones were thrown at my house at night, breaking the windows.

The article was breathtaking. It shouldn’t have been published. It was a hot cake for teachers and would-be teachers. I tried hard to investigate my story, “Shake up in the Catholic Mission.”

I wrote about the injustices meted by the official of the school system and how they preferred a different system. The new education secretary, Emil Kujabi, thought he came with a different style, but it was not so. He came only with vengeance and disrespect.

The article highlighted all the ills. Many a teacher would fight for a copy. Those for the motion applauded me.

Emil Kujabi put me in his black book, waiting to see my complete downfall. They sent out a communique forbidding teachers from writing for the press.

I did not use a pen name, either. I stood by my name. Stones were thrown at my house at night, breaking the windows.

I was accused of playing too much with the children and was moved to another school. There was no peace, but I had to strive to maintain my prestige.

I was always written up for anything I did. I was tired, but I had nowhere to report because my writing had embarrassed some and made some realize they were being cheated.

I was always down with new trends in those schools. School children were set against my good name. The Minister of Education warned me to stop writing about their schools or risk being deported to my rotten country. I did not relent. I was not at peace with those who hate foreigners, but they could do nothing other than transfer me to village.

My next transfer was a plot to derail my progress, but was it good, bad or ugly?