In mid-September of 1998, I knew the Catholic Education Secretariat was going to transfer me to another school. I knew my fate during the school year. It was because of an article I wrote for a local newspaper.

The headline was, “Shake Up in the Catholic Mission.”

This made me a target of Emil Kujabi, the Gambia education secretary. He was a Christian but very hard-hearted; he hardly said “yes” to teachers. I complained about how some teachers perceived me as a man who had come to destroy the fabric of their teaching culture and their country. The teachers talked about how I was chased out of Basse for writing about bad bread in that part of the country. 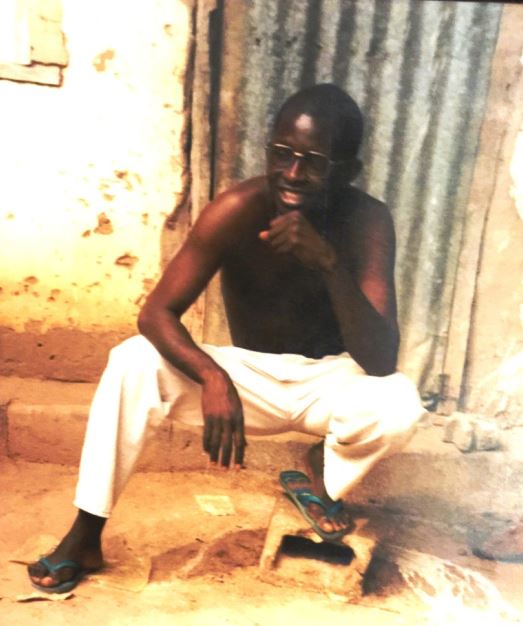 Everyone expected me to be transferred to a distant place so that I would resign and leave them in peace. I stayed with it because I used my money to help others in my war-torn country.

My name was all over the schools. One of the head teachers had rejected me immediately after hearing my name discussed as a possible transfer to their school. The education secretary became angry with me and said in a very loud voice, “You are making my work very difficult because no headmaster wants you in their school.”

They could not fire me. I was a staunch Catholic, who had attended the seminary to become a priest, and I was well known by both the priest and the bishop.

Everyone rushed to the Catholic Education Secretariat. My informant told me that I was rejected by a village school but they were trying to fool the public by putting my name in that school and then bring my name to another school with the second and final posting very close to schools’ reopening.

I thought and prayed I would not get transferred. But my informant was right, and gave me the most accurate piece of information that I would build on to write about the Mission Schools.

Someone was fired in that office on suspicion they leaked information to me. That was not true.

I went to the mission, but the crowd was too much. I returned and waited for a more convenient time. Many people came to tell me the name of the fake appointment I got. I told them it was not true, that no one would want me in that school. The news reached Kujabi. He called a meeting and released a memo that banned teachers from writing for newspapers, about what was said in the meeting or anything in the Catholic Mission Secretariat.

Perhaps he would have enjoyed my cries. However, my grandmother taught me men don’t cry when they are faced with problems, they shoulder the problem like men.

I refused to sign, but no one detected it because the school was large. However, when it was taken to the secretariat, it was actually my name that they were looking for. My source had told me everything.

The head teacher was called and reprimanded for [not] making me sign, thus letting me write. I was made to sign it by force anyway. I did and went to my new school.

I was a good teacher. It added to my staying in their schools.

“Why can’t you look for another school to go and teach there?” Kujabi asked during a meeting in which he also asked why I did not sign the memo. I told him the Catholic Mission was the only place I felt comfortable, since I was born in it.

Kujabi decided to throw me to a very remote place, a place I had already known. There was no joy at this point. He hated me and did not want to see me. If I smiled, he would not like it.

Perhaps he would have enjoyed my cries. However, my grandmother taught me men don’t cry when they are faced with problems, they shoulder the problem like men. Having reminded myself of that, I decided to return home at the end of the week. I did not look at the fake postings. The people wanted to see my reaction, to see if I would leave their mission and find another teaching job. 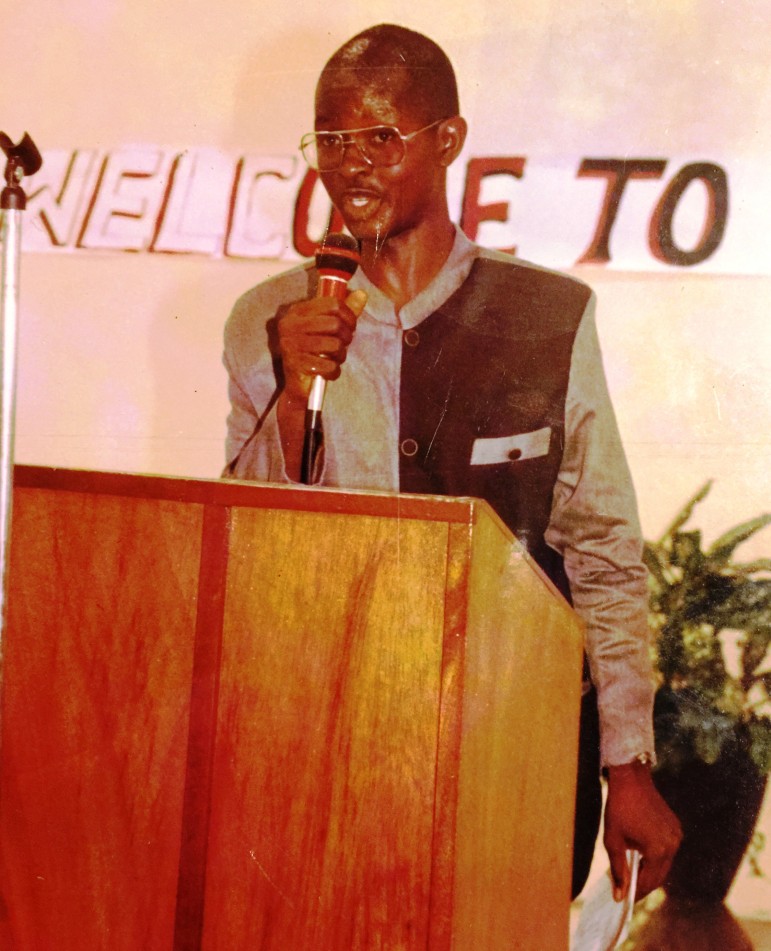 Augustine Kanjia chairs a school function in Bwiam in June 1999

It was Sunday, the day before schools reopened. I did one of the readings at church. Many looked at me in disappointment. I knew what was happening. I did not care. They secretly reported that I did not care about any job, that I felt complacent about it. Teachers were in tears, either because they had been demoted or posted to another school as punishment. I was not worried, I stayed strong.

I finally went to see where I was posted. It was as my informant told me. I was not happy, but I had to shoulder it. Life was different for me since my attack in Basse. It was not a good place for me anymore. But where could I go when the other countries were very hostile?

The bitterness of a secret enemy spread like wildfire. Many wanted to please him for a possible position in their teaching career. I could not compromise what I stood for: fair play with no bias, and to help the helpless.

Schools reopened on a Monday. I deliberately did not go on the Sunday because it was late to go to a place you don’t know.

I carefully packed a few belongings, [including] my little old guitar that I entertained myself with when the days were hard. The roads were full of potholes, but most of it was tarred. The bushes hung very close to the roadside, whipping passengers in cars if they did not pay attention.

I was lucky to have picked the front seat. I squeezed the floor as the driver sped away. I slowed down with my imaginary brakes. The drivers seem tired, especially if they are fasting, and their breath stunk. I closed my mouth because my driver was not an exception.

It was a 51-mile-long road, but it took more than six hours to arrive there. There were more than 15 villages on the way, each of which the driver stopped in to either pick up or drop off passengers.

Finally, we got close to Bwiam, where I was posted. It was also the hometown of the education secretary. Close to the town, I said to myself that there was a motive for transferring me to his hometown. Maybe that is where he could ask his boys to torture me or maltreat me.

I arrived. The first house I stopped at was made of [concrete] with old, corrugated iron sheets. Everyone looked pale and tired. I spoke to no one, but everyone looked keenly at me and said, “This is the new teacher.”

The village was small, so everyone knew a stranger. There was only one shop in the village. People stood in line to buy commodities. I watched all around and found out that the school was away from the houses. The evening looked nice, with a shiny patch of the sun on the hilly side of the town. Others were in almost total darkness.

I greeted a group of men, “Salamalayku.” Gambia is 95 percent Muslim. I spoke English and everyone disappeared, not because they saw me but because they did not speak English. 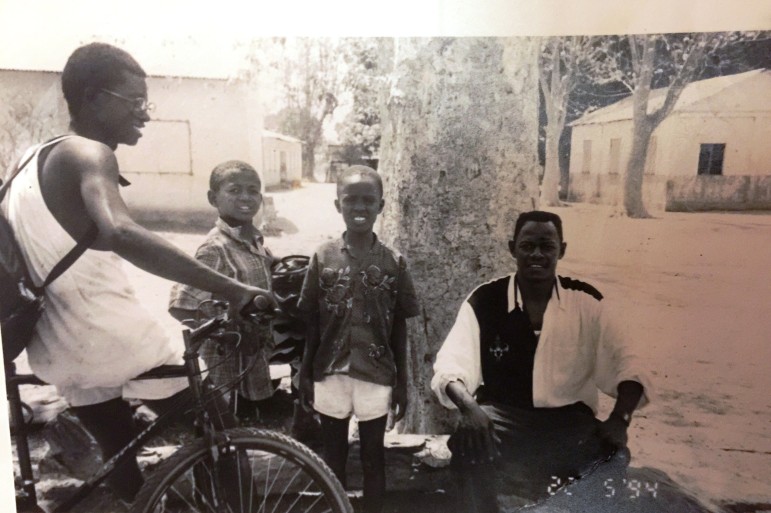 Augustine Kanjia, left, with friends in from his school

I went farther and saw little, nice girls and [spoke to] them in English. “I don pich Englis,” one of them said. I got her, then I asked for their head teacher. The little girl was named Mbie, who later became my friend and a good source.

I was given a place to sleep, no bed but a mat. I found a place to stay the next day. With pain on my sides, I woke up early and did my jogging and went to school.

The headmaster introduced me. He said I was a great writer so everyone should be careful about what they said in my presence.

The village was small. There was nothing I could eavesdrop on. Besides, they spoke only Mandinka and Jola, which I did not understand. I [eventually] learned Mandinka and spoke it well. I was accepted by many because I learned the language.

School was very boring. I did not look forward to going to the school in the mornings. I cooked my own food after school. There was electricity to preserve my food. It was just hard.

Their nights were mostly fearful. There was too much busy grass on the roads with lots of big snakes. My house was almost falling down. It was old, and many things were missing. Perhaps that was one of the beautiful houses. The zinc was rusty. We all left the house when it rained.

I used mosquito net to stop mosquitos, but one night it stopped a big opossum that entered. It ran over me, and became mad in the net as it could not see a way out. I quickly woke up and used my flash torch and chased it away. It was another sad night. I thought it was chased by a snake.

Many thoughts came to my mind, and I could not sleep. I went out, it was about 11 p.m. Many people were in bed. The young men have a mask which is seen by only members of that mask. I did not know it and I went out. I was chased away from my house and they took it over.

I went to sleep in the school; I had my own key to a certain class. I reported to my employer, he asked as to what he should do. “You are lucky,” he said. These were his last words to me about my complaint.

To catch up with Augustine’s story from the beginning, follow the links below:

337 thoughts on “Part 4: The Smoldering Bitterness of Enemies”