WORCESTER  —  Carlos Lopez stands up from behind his desk and casually rolls up both sleeves.

A river-like row of scarred and scabbed-over skin ripples for at least a foot along each bared arm — the ribbons of old needle marks openly revealing the middle-aged man’s troubled past, which included heavy bouts of drug addiction, jail time, and a life on the streets.

“This place” is a weathered two-and-a-half story house located on Beacon Street, near busy Hammond Street.

Smack in the middle of inner-city Main South, it sits in a neighborhood where gangs are known to rove about and where drug dealers peddle their wares. It’s in an area where the wailing of police sirens is heard frequently and where the pop-pop of gunfire occasionally breaks out.

The house itself is spacious but sparsely furnished. Its drab gray shingles look like they will soon need to be replaced and the roof needs work. There’s little art work on the walls inside to cheer up the inhabitants.

This is clearly not a home where there is a roaring fireplace to warm its occupants on a chilly New England fall night, and there are no expectations that the smell of freshly baked cookies will drift out of the utilitarian kitchen. 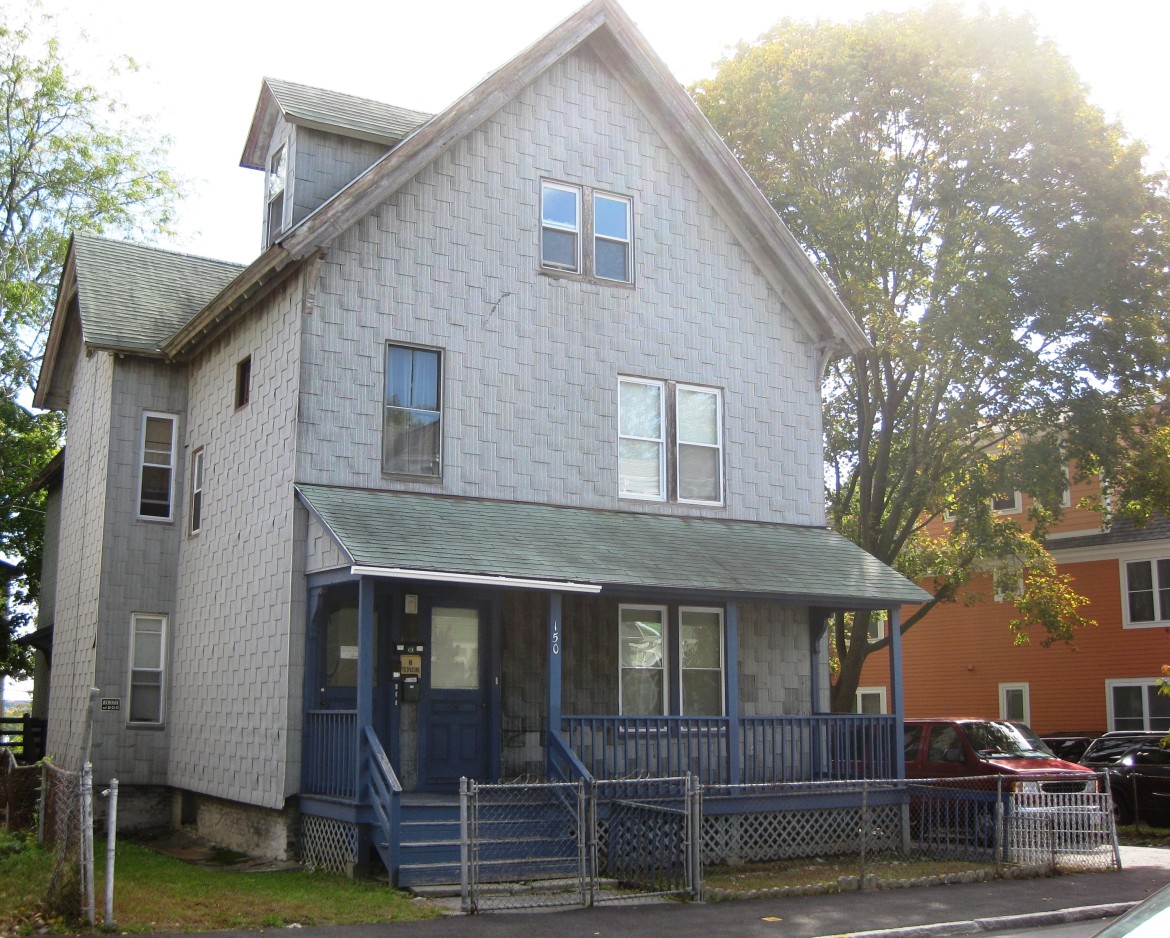 But despite its spartan, bare-bones quality and the rough-and-tumble neighborhood surrounding it, the house’s residents will tell you that, for at least now, they wouldn’t trade places with folks living a much more comfortable suburban lifestyle.

“This is a place where many come for perhaps a last chance to overcome their problems with drugs,” said Lopez, a Puerto Rican native who recently became the executive director of the rehabilitation program that is run out of the rambling home.

There are a number of similar small, residential treatment programs scattered around the city.

But the program managed by Lopez, who said that he used to take any drug that he could get his hands on, is unique for a couple of reasons.

First, it’s faith-based. Participants rely on the self-betterment teachings of Jesus Christ to turn their lives around.

Second, individuals undergoing treatment go cold turkey and do not use withdrawal drugs in efforts to break their addiction.

Participants heavily rely on each other and group leaders — individuals who successfully went through the program — to break their crippling drug habits.

“It works,” said Abraham Alvarado, who offers Bible lessons once a week and who serves as Lopez’s assistant. 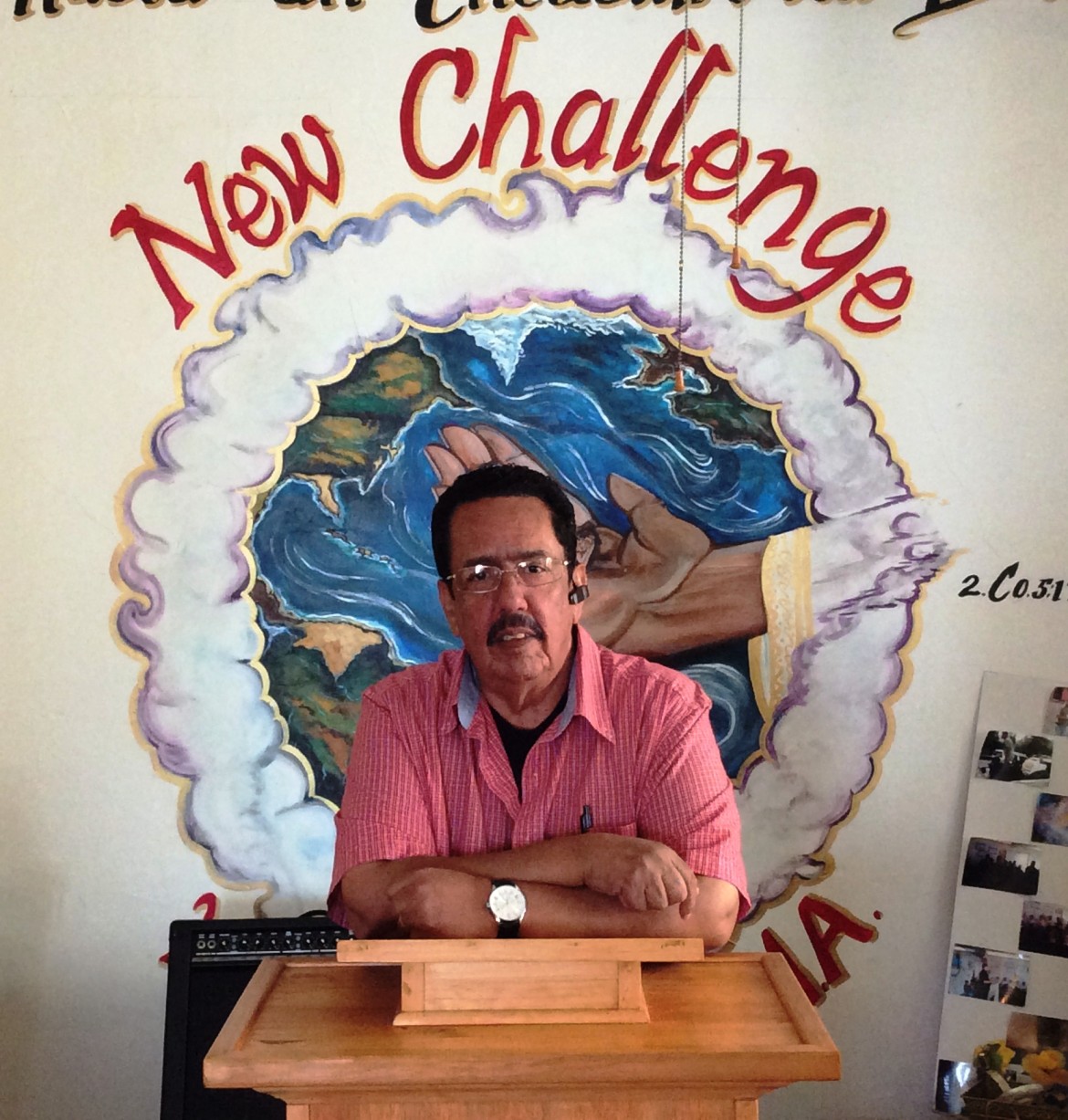 The program, which is open only to men, is managed by New Challenge, a non-denominational Christian organization that was founded in Lowell by a couple of ex-addicts who once lived out of a van.

New Challenge opened a Worcester site about five years ago on Preston Street, which is located in the Murray-Wellington streets area, about a mile or so north of the program’s present location.

“They come in here and don’t seriously believe that we can help them. They don’t want to stay. But we sit and talk with them and pray. Before you know it, they come around.” — Carlos Lopez, New Challenge executive director

Ironically, the rented home on Beacon Street where the program now is operating was a former crack house, according to police and program officials.

From the outside, there is nothing to distinguish the home from others nearby.

But walk through its doors and a visitor will realize the house is more than a residential setting.

The living room, for example, serves as a small chapel. A detailed painting of the prophet Daniel, imprisoned in the lion’s den, adorns the back wall. The painting was drawn by a former participant.

In the front of the room, there is a pulpit where program officials and visiting ministers preach Christ’s message of redemption and ultimate salvation.

Lopez said the New Challenge program is difficult because of its non-reliance on withdrawal drugs. He added that individuals also have to commit themselves strongly to the program.

Lopez admitted that some can’t or are unwilling to adapt to the program, so he recommends them to other organizations offering rehabilitation services.

According to Lopez, many would-be participants hardened by their life experiences are skeptical about the program.

“They come in here and don’t seriously believe that we can help them,” he said. “They don’t want to stay. But we sit and talk with them and pray. Before you know it, they come around. One can’t lie to God and eventually people look to him and say, ‘I’m in a situation. Please help me.’ ”

Still, officials said many decide the treatment offered by New Challenge isn’t for them.

“Some guys leave,” Alvarado said. “After a couple of days, they just decide our ways aren’t right for them.” 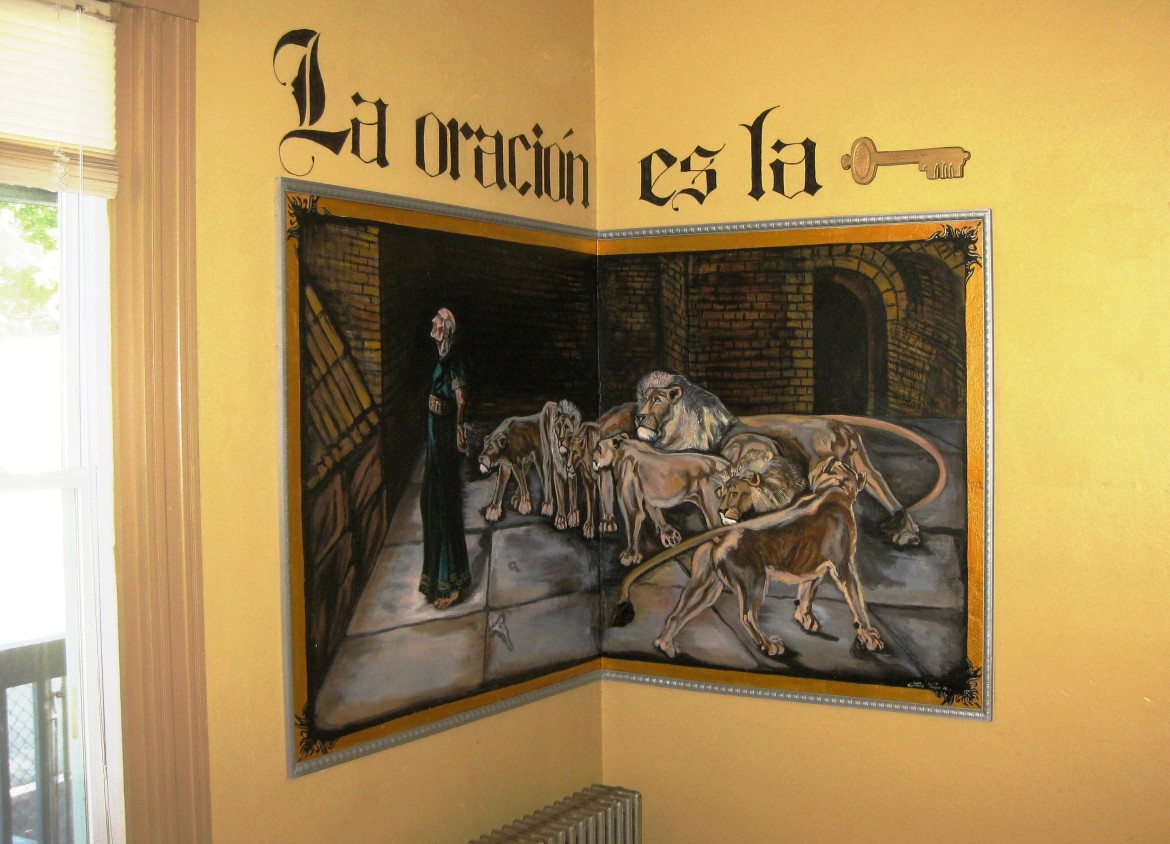 A mural, above which reads, “Prayer is the key,” adorns the walls of the chapel.

The facility can house up to 15 people. The bedrooms accommodate up to three people, including a group leader.

The program is financially self-sufficient and is funded by area churches that refer individuals to New Challenge. Also, many participants who are able to leave the facility to work usually contribute some of their salary to help pay for the upkeep. Some families of participants also chip in money.

The program is open to all ethnic and religious groups, including non-Christians. Most participants, however, are Hispanic.

Like others, the New Challenge program is rigidly structured and those taking part receive a heavy dose of Pentecostal-like spirituality.

“We are a Christian program, and even though we accept those who don’t believe in God, our rehabilitation is built upon Jesus and what he taught us about ourselves and others,” said Lopez, a former Roman Catholic who said he lost his belief in the existence of God when he began taking drugs in his youth.

Participants wake up in the morning and take part in a prayer service and learn about the Bible. After breakfast, those who have jobs go to work while the others undertake house chores.

For example, swearing, lying and gossiping are not allowed and fighting might result in discharge from the program. Participants also are not allowed to talk about their drug days out of concern that such discussion might lure residents, particularly new ones, back to their old ways.

Smoking is not permitted.

“We want to clean up a person’s lifestyle,” Alvarado said.

“It’s important to realize that people on drugs don’t have boundaries,” Lopez added. “We try to give those in our program responsibility. We try to bring some organization to their lives. To beat drugs, you have to take control of your life. We try to help you do that.” 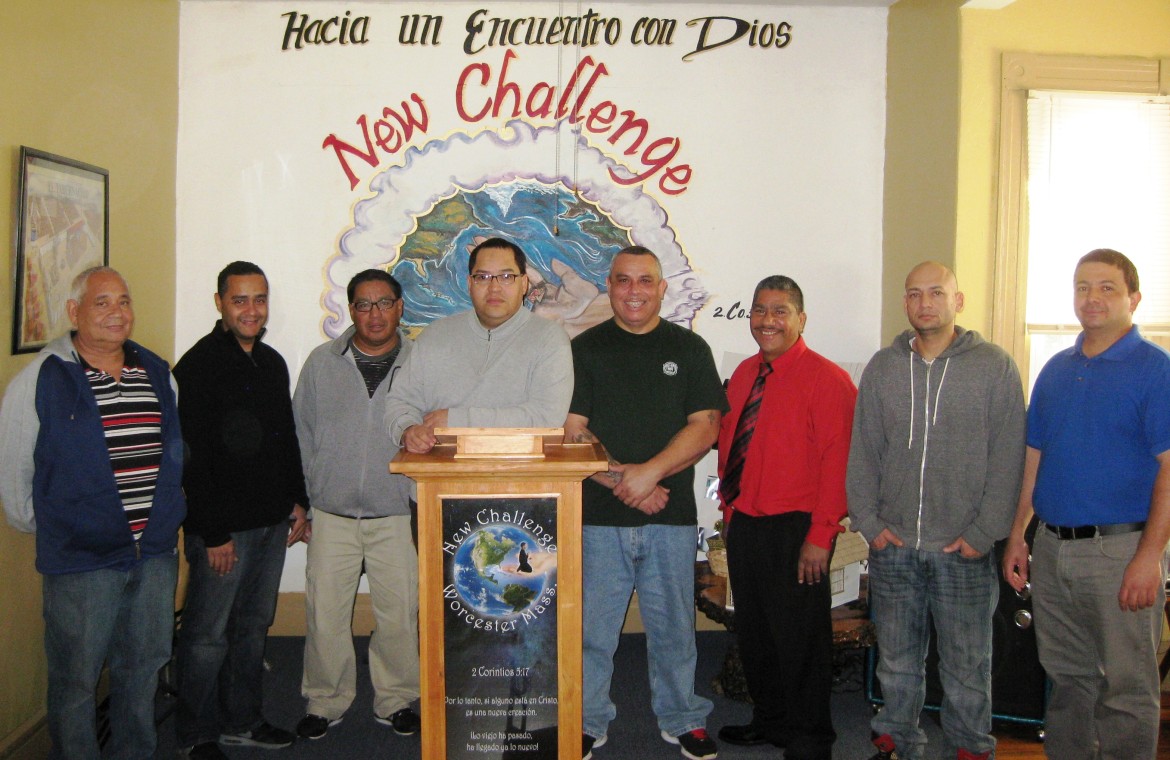 Generally, participants stay in the program from six months to a year, officials said. Some relapse and return for another stint.

“We realize that it’s difficult to successfully fight the powerful urge to take drugs, so we welcome back those who might stumble,” Alvarado said.

Lopez, who said it took him about three years to beat his drug “demons,” said he is an example of the program’s success.

During an interview with The Worcester Sun, Lopez took out a picture of himself. Taken while he was on narcotics, it shows a bleary-eyed, dazed man with shaggy long hair who stared absently at the camera. The image is shockingly different from what Lopez looks like today. With close-cropped hair, Lopez is trim and appears to be in good health. Last weekend, he got married and honeymooned in the White Mountains of New Hampshire.

“I’m a totally different person today,” he said, noting he began taking drugs when he was about 14.

Lopez said he grew up in Puerto Rico and was raised by loving parents in a stable household environment. But like many who take drugs, he said he began hanging out with the “wrong people” and began to get into trouble. He was arrested several times on drug offenses and lived for long periods on the streets, where he only worried about where his next fix was coming from.

“I know what our people go through because I experienced the same things on the streets and in prison,” Lopez said. “I took anything I could get my hands on. Marijuana, cocaine, you name it.”

Lopez said his mother learned about the New Challenge program from a friend and the family sent him to Massachusetts for treatment.

“I’m living testimony that the program works,” Lopez said. “But I had to make the decision to change my life. When I got to the airport (in Puerto Rico), I decided to leave all thoughts of the needle there. We are all born clean. As babies, we don’t have cigarettes in our mouths or needles in our arms.”

Alvarado said he spent years battling drugs and finally overcame his addiction thanks to New Challenge.

“To beat drugs, you really have to transform your character,” he said. “The Bible can help you become a better person. In our program, everybody looks out for each other. We are witnesses to the power of God.”

Alvarado, who spent some time in the program after joining it in 2006, said he was in such ill health because of drugs that he had to be rushed to the hospital.

“The doctor said that if I came in a little later, I would have ended up in the morgue,” he said.

Lopez said faith can be a powerful tool in fighting drug addiction.

“Some say there is no God,” he said, noting he had unsuccessfully taken part in other drug programs before turning to New Challenge. “But it’s funny how they turn to him in times of trouble.”

Lopez said his office contains files of about 500 people who have sought help. He said the documents are kept in case individuals relapse.

“We have been very successful,” Lopez explained. “But we are always here in the event somebody goes back to their old ways. We want them to know that they are never alone. That is what the Bible teaches.”

There are many faith-based treatment programs across the country, including the well-known 12-step one run by Alcoholics Anonymous. Over the past few years, the programs have even received partial funding by federal, state and local governments.

For example, the U.S. Substance Abuse and Mental Health Administration works with at least 800 faith-based groups who have been involved with drug rehabilitation.

However, few of those groups are like New Challenge, which chooses not to use drug therapies.

According to SAMHA, 87,014 individuals were admitted to Massachusetts substance abuse treatment facilities in 2013, the latest year such statistics were available.

Sixty-eight percent seeking help were male and most overall admissions (20.3 percent) were for those between 26 and 30.

Whites, which include those of Hispanic descent, made up 80.6 percent of those admitted, while 6 percent were black.

Regarding ethnic groups, 86.7 were non-Hispanic and 10.8 percent were Latino.

This article was originally published in the Oct. 11, 2015 edition of the Sun.