At the end of each school year the staffs of Saint Edward’s Lower Basic School and Saint Edward’s Upper Basic would gather together. The gathering would include a soccer match between the schools to see who was the best.

Preparations were underway in June for a party and the soccer match on the closing day in July. My school made contributions for a party after the match. I learned earlier that it could be dangerous to eat at a party in the village because they believed in revenge. 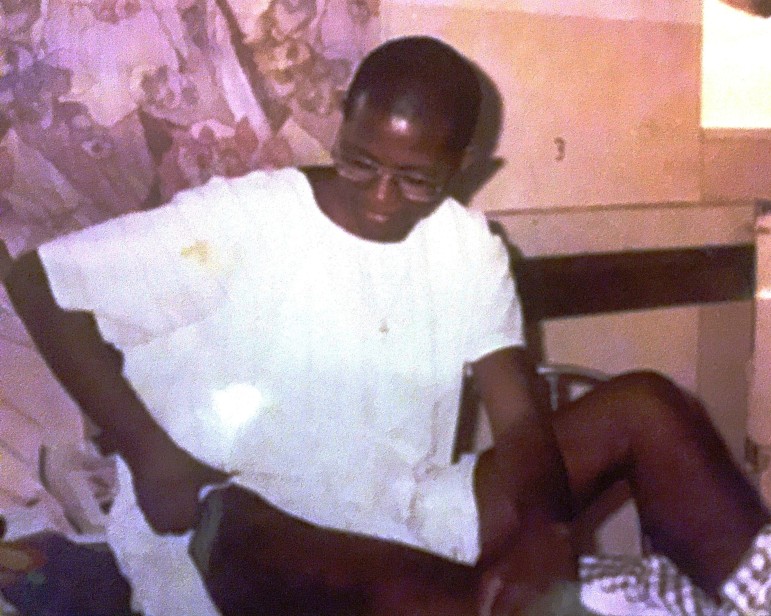 Was I their favorite? I could not tell because some would laugh with me and smile and talk a little, but what remained in their hearts was enormous and it was unspoken. In fact, my decision on that day was to leave them playing their game, and bid them farewell and go to the city.

The decision was overturned by my little friends, Mbie Nyassi and Fanta Touray, who were like my children. They were in the sixth grade, and I taught them English. In addition, many people wanted to see how good I was at soccer since I had made a name for myself in higher levels.

I wanted to show off and then leave them to ponder on my personality and activities. The soccer match was a perfect way for me to prove my skills to those who only saw me play volleyball and jog every evening.

News of my taking part in the teachers’ match went ’round the town. I was a star before the match.

Meanwhile, my mind was stuck on a news item I could write about before leaving for the long vacation that same day.

This was a bad match, I thought, but it was too late. I started enjoying the game. We could not make any headway in the first 15 minutes. The guys were big and heavy. I played the forward, striker. The backs were tough, but I could dazzle them easily.

Down the road to Dorbong, the next village, between the school and the village was a little bush. The area had only stunted grass for grazing by animals from Bwiam and Dorbong.

I had been to Dorbong. I attended a very dangerous wrestling contest among villages that ended in a big fight, putting everyone on their feet. It was dangerous because no one could stop them fighting. They would involve those who came around just to watch.

In the area between the school and that village stood an iron pot that was known throughout Gambia. The pot could turn by itself. That was a mystery since no one was able to prove why the iron pot turned north or south. Villagers believed there was a superpower behind the “Cooking Pot,” the name the villagers gave it. Villagers would bring gifts of money and place them around the Cooking Pot. It was old and rusty, but not even the old chief would tell me how it came to be placed there.

It was time for the match. I had already done my interviews and written my article. I sent the article with a photo of it to the Point newspaper, and it was widely read.  It was going to be my final story for a long time, but I didn’t know that then.

The referee called the match to order; the teams from the middle school and the elementary school were present. Spectators, including our students, were lined up on the side of the pitch. They were singing and cheering, with my name prominent. Perhaps I had impressed them with my brilliance.

This was a bad match, I thought, but it was too late. I started enjoying the game. We could not make any headway in the first 15 minutes. The guys were big and heavy. I played the forward, striker. The backs were tough, but I could dazzle them easily.

In the 16th minute, my teammate Mr. Sowe passed me the ball and I dribbled past the first opponent and passed it to my partner again. Then I opened up and he gave me a wide pass, which I controlled.

The first stuffy opponent, Alex Bass, came at me. I dribbled past him with ease. He trapped my left leg and pushed me hard. About 12 feet from the opponents’ goal, I landed on my right leg with a very heavy force. 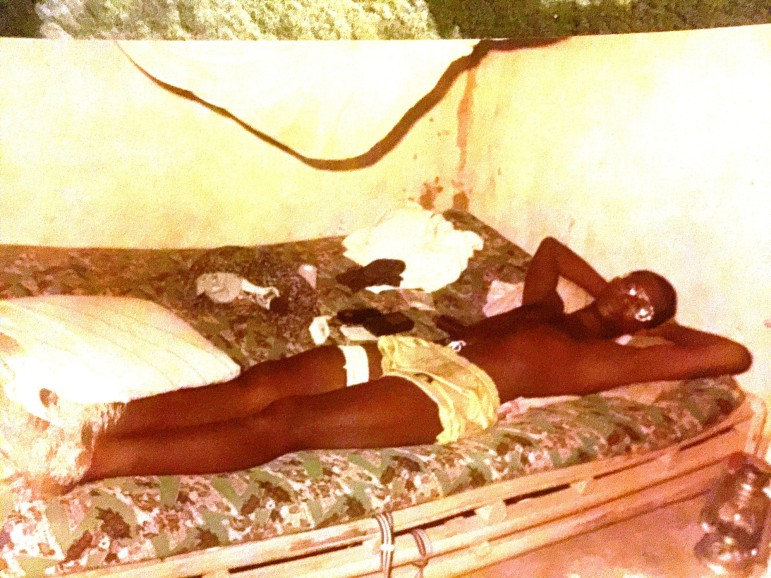 “The president’s uncle was the bone doctor. He called some strong men who held me tightly, and he pulled my leg to join and tie it at the position where it got the fracture. It took about 15 minutes and he was done.”

My left leg was too late to save my right leg from a fracture. I heard a loud sound. I found myself lying on the pitch helpless. That was the beginning of my suffering as a refugee.

The teachers suggested taking me to Kanilai, the home of Gambian president Yayah Jammeh. It was just about seven miles from Bwiam, where I broke my leg. The president’s uncle was the bone doctor. The roads were crooked, and the pain was excruciating. Each pothole was a pain in my heart. There was not much medication given when we arrived. He called some strong men who held me tightly, and he pulled my leg to join and tie it at the position where it got the fracture. It took about 15 minutes and he was done.

I was returned to the van and taken to my room in loneliness. I again thought of my home and grandmother, who had suffered to bring me up in poverty and was killed in a rebel war.

I was to rest for 14 days. After that, according to the village doctor, I could rise on my feet and play again. But the suffering was too much.

I usually did my own cooking, but I could not cook with a fractured leg.

My wife came to pick me up on the 14th day, July 17, 1999. I was taken to the health center. They demanded I buy gas for the government ambulance. I did not pay, but they took me to the hospital anyway. 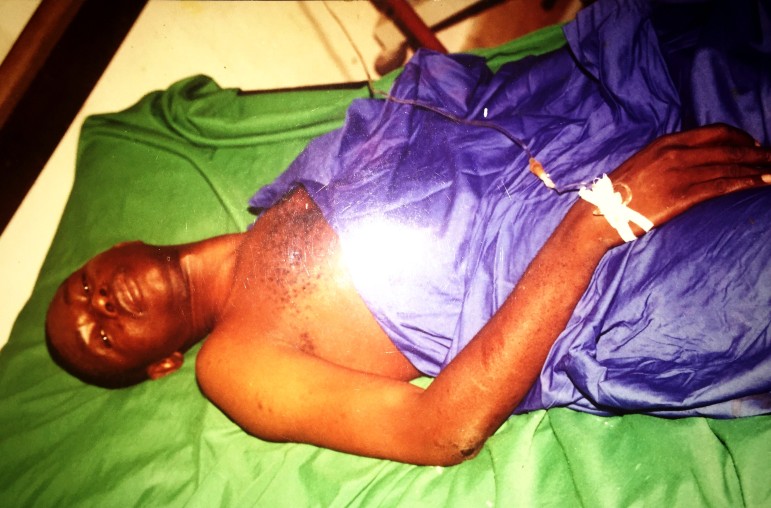 Augustine Kanjia after a second operation in August 1999

I did excruciating physical therapy, which would cost me money. I informed the United Nations High Commissioner for Refugees (UNHCR), and it paid my bills.

A new life started for me with much difficulty attached.

I endured several sessions of physical therapy, but my knee remained stiff and could not bend. With my long legs I could not sit in a taxi. I had no car, so I took up walking in the dust. My little daughter, Mary, was with me always. They called her “Papa’s Belt.”

Now there was the question of my work. The Catholic Education Secretariat invited me to return to work because they did not pay me when I had my injury. I had resigned, but they still wanted me; I was a rough diamond.

I had the chance to choose between a private school, the Catholic schools, and my journalism. The private school paid well and I had been deprived of salary for a long time, with no family member to help.

My situation was dangerous. Hardship was [pervasive]. I could not pay rent, so we were tossed from one house to another until I settled down at my new school. That too was unstable. Emil Kujabi, the Education Secretary for the Catholic Mission, used his influence to let them kick me out. This was a dangerous trend, opined one of the officials at the Catholic Mission Secretariat.

“Augustine will join the newspaper and remain there writing about us. Good to bring him back,” Mr. Faye said. I returned and taught in a city school in Banjul, Saint Joseph’s Upper Basic School.

The principal was a supporter of Kujabi, who promoted her on sentiment rather than qualification. She did not want to see me, but I was there teaching French and English. It was quite difficult with my leg.

I tried my best to raise money from 2000 to 2004 to pay for an operation in Sierra Leone. It was hard to raise any funds, but I did it anyway. I was transferred to another school, Saint Theresa’s primary school. It was the continuation of the same story: hatred, and naming me a journalist who would write about people.

My son, Glen, was in the same school I taught in. One day I wrote a very big and moving story about Ghanian children in slavery, imported to Gambia to do odd jobs.

I did not use my name, but rather a pen name I chose. Glen’s teacher, Rose Mendy, read the story to her class without knowing I wrote it. Glen happily told the class his father had written the story.

My article brought an early morning raid on the village. The Ghanian children were all apprehended and returned to their country.

146 thoughts on “Part 5: The Soccer Match That Changed My Life”