If Worcester’s residents are searching for a glimmer of hope for the city’s future in the wake of recent international terrorist attacks, and the city’s own battle with opioid abuse, major crimes and racial tension, they won’t have to look any further than a small group of area teenagers ready to tackle social issues as community leaders. 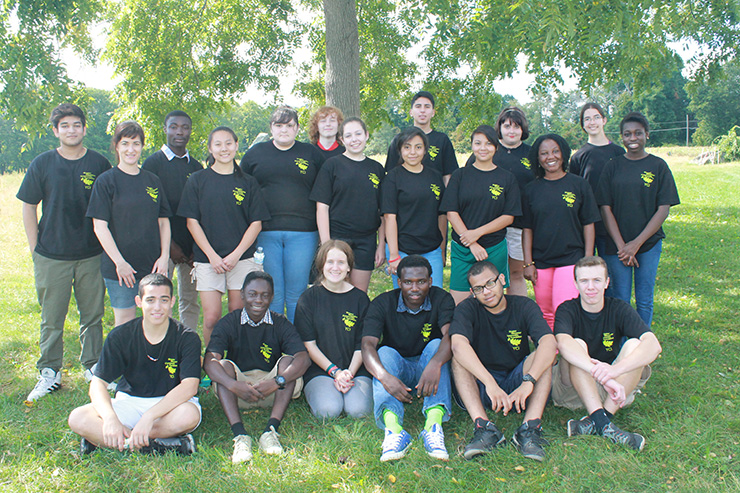 For the past 16 years, members of Youth for Community Improvement (YCI) have been making a difference in Worcester and have been responsible for the distribution of much-needed funding to nonprofit organizations throughout Worcester and the surrounding areas.

This year is an important year for the YCI program because the majority of the 18 teens involved in the program were born in 1999 — the year the program was founded.

Also, the 18 students are the most members the YCI has had in any year.

These teens will be responsible for deciding which nonprofits will be awarded a maximum of $4,000 each from $24,000 in available funds.

Twenty-one nonprofits have applied for funding, and those that best represent a “youth voice” will benefit from the generous funding of the Greater Worcester Community Foundation.

“There’s 18 members, so there’s 17 members other than myself, who feel that we have the ability to make an impact,” said Laura Giordano of Shrewsbury, a junior at Shrewsbury High School. “We might be in high school, but we have so many opportunities and different perspectives that we can give on what we think should be funded.”

Since YCI began, 70 nonprofits in Worcester County have been awarded $285,000 from nearly 200 teenagers involved in the program.

YCI, Worcester County’s only non-school youth philanthropy program, is an advisory committee of the GWCF and is entirely composed of area teenagers. The program is based on the idea that youth philanthropy and youth grant-making experience is effective in youth development and this experience needs to be expanded to contribute to economic development.

Each nonprofit that applies for the funding has to have a total project budget of less than $25,000.

Recruiting and interviewing teenagers for the program is nearly a yearlong process. The program coordinator, Amy Mosher Berry, spends much of the spring recruiting students from local high schools and sending an email campaign to youth centers. Each student is interviewed in June before the school year ends and is alerted of their acceptance into the program before the following school year begins.

There were 22 new applicants this year, with only 13 spots available. Five juniors returned for their second year in the program.

“They [the students] have a lot of self-awareness. It’s that kind of awareness that kicks them into action as leaders. So many people, particularly adults, don’t view young people as leaders. And I honestly think that some of these young people have the best ideas to solve big, complex problems in our community.” — Amy Mosher Berry, YCI program coordinator

YCI is a two-year program for high school students. This year half the students are from Worcester while other students come from Marlborough, Westborough, Shrewsbury, Grafton, Princeton, Sutton and Auburn.

Over the past few months, Mosher, who has been running the program for eight years, has noticed that the students involved in YCI are “genuinely interested in each other’s perspectives.”

“They’re actively leading the discussion and they take it very seriously,” said Mosher, who said members of this group actively govern each other and make sure they’re each fulfilling their end of the responsibilities.

Mosher told a story of a particularly difficult meeting this fall when the students weren’t all on the same page, weren’t focused and came to a realization at the end of the meeting that they needed to do better in order for this program to work.

One of the students really impressed Mosher when the student called her and took full responsibility for the entire group’s behavior immediately following the meeting.

“They [the students] have a lot of self-awareness. It’s that kind of awareness that kicks them into action as leaders. So many people, particularly adults, don’t view young people as leaders. And I honestly think that some of these young people have the best ideas to solve big, complex problems in our community,” Mosher said.

As part of keeping each other in check, the group created the “Just A Reminder” Jar — a poster of a jar that they all agreed to sign with words representing what the group not only wanted to get out of the program, but even more important, what they wanted to put into it.

Phrases in the jar include “Respect,” “Safe Zone” and “Listen to Each Other.”

“It’s almost like a social contract of how they want to run their meetings,” Mosher said. “We have that visually and I find that they’re really taking it pretty seriously. I find that it’s a testament to their own words. They’ve created the thing, so they want to hold each other accountable.” 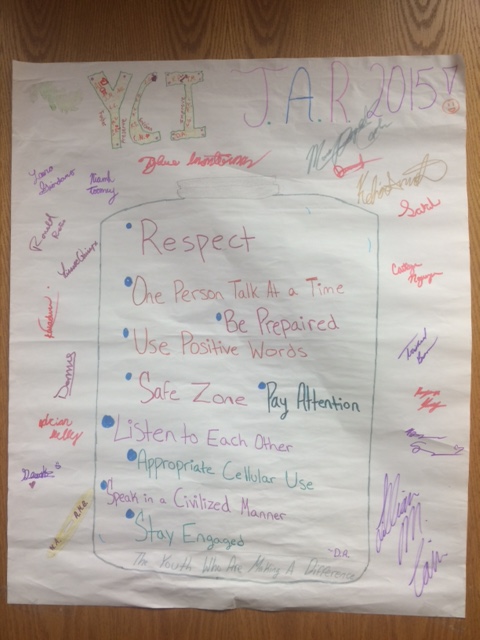 YCI’s “JAR” helps set the tone for how the group of teens interact. Each of the 18 members of the council, and advisors, signed it.

For the teens selected this year, the areas of interest that will be funded include nonprofits with a focus on diversity and cultural awareness, substance abuse, domestic abuse, and depression and suicide prevention.

Nonprofits that promote access to greater economic opportunity — including better education, housing and nutrition — will also be considered for funding.

Giordano, along with Lillian Cain of Worcester, a junior at the Massachusetts Academy of Math and Science, and Rayaan Yunus of Westborough, a sophomore at Westborough High, agree that proper nutrition is one of the most important issues Worcester residents are facing right now.

Yunus, who was born in Massachusetts but spent the early years of his childhood in Pakistan, said his experiences have shown him just how important proper, and affordable, nutrition is for not only people in Worcester, but everyone around the world.

“For me, one main focus on our RFP (request for proposal) was nutrition, because that was a big problem in Pakistan,” Yunus said. “And it’s an issue in Worcester.”

Giordano agreed with Yunus, saying “I’m a big advocate for nutrition. That’s one of the biggest things. Access to food and access to healthy food is huge, especially in a city as big as Worcester. Some people can’t afford to buy healthy food. Buying a bag of chips is sometimes less expensive than buying an apple.” 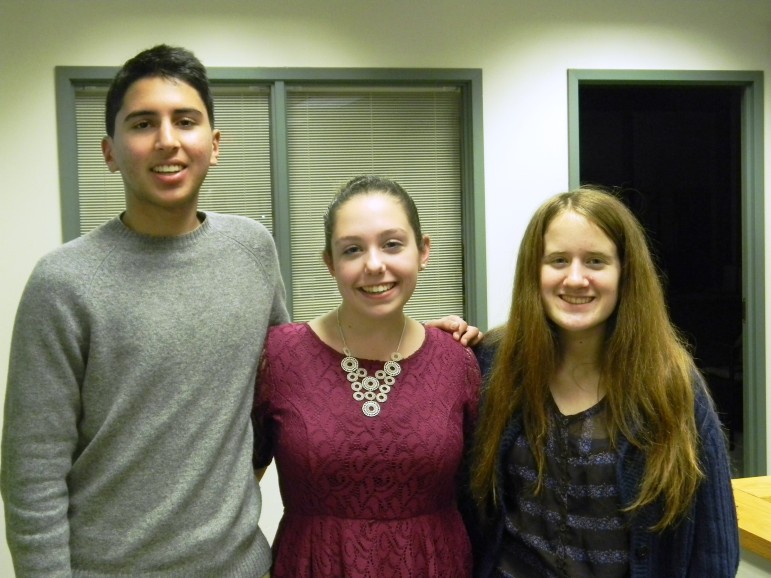 “If you make nutritional food less expensive, people are more encouraged to buy it,” Cain added.

The students of YCI went on a one-day retreat to the Community Harvest Project on Sept. 19 to get to know each other, spend time with one another, and learn about the importance of growing fresh fruits and vegetables as a way to fight hunger.

On Oct. 28, YCI students joined students from South High’s youth philanthropy project and went on a bus tour to visit two Worcester nonprofits — the Worcester Housing Resource Alliance and Pernet Family Health Service — to observe how funding from the South High kids was spent and how the funding impacted those organizations and programs.

For YCI students, it was a good experience to see how nonprofits utilized funding and listen to leaders of nonprofit organizations.

On Tuesday night, Nov. 16, Giordano, Cain and Yunus presented to the GWCF board of directors their group’s choices for the organizations they would like to see receive funding.

The nonprofits that will be awarded funds from the YCI will be announced in mid-December.

Jake Messier, a public relations and outsourced marketing director for the program, said, “Those people on the board are really rooting for them. That is a room full of cheerleaders. They’re people that want them [YCI students] to do well. They’ve been in their position as junior leaders a long time ago, and they’re impressed that kids nowadays are actually doing something like this instead of being in front of an Xbox.

Nonprofits that have previously received funding from YCI include Rachel’s Table, Southeast Asian Coalition and the Regional Environmental Council.

“This is a commitment. It’s three hours on Wednesday night for 12 weeks,” Messier said. “These are kids that are already involved with lots of other things, or else they wouldn’t be involved in this program anyways.”

“For most people, when they’re 15 or 16, they don’t have this kind of experience under their belt,” Yunus said. “It helps with future aspirations and helps build your confidence.”

“The most amazing thing about all of this is how much support we get. If you have the attitude that no one is going to help you, it’s so untrue. People are good. It’s just a fact,” Cain said.