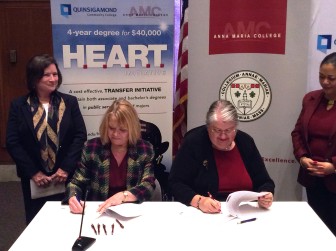 The agreement signed by Quinsigamond President Gail Carberry and Anna Maria President Mary Lou Retelle caps the cost of four years of study at $40,000. The program is open to those studying the fields of criminal justice, fire science, human services and social work.

Transfer agreements, also known as articulation agreements, are common in higher education. However, the Higher Education and Active Responsiveness through Transfer (HEART) Initiative is ground-breaking for two reasons.

First, it focuses on public service-oriented majors, some of which will see faster-than-average growth in the coming years. For examples, the number of jobs in community and social service occupations will rise 17.2 percent from 2012 to 2022, according to the Bureau of Labor Statistics.

Second, and most importantly, the Anna Maria-Quinsigamond agreement is cost efficient and provides cost certainty.

Student loan debt in the United States is nearly $1.4 trillion. One study estimated the average debt carried by students in the class of 2013 was more than $35,000.

Study after study after study shows the negative long-term impacts of student loan debt, from delays in saving for retirement to an inability to purchase a home. These impacts are a drag on economic growth.

In addition, the American Student Assistance study showed “loan debt was deciding factor, or had a considerable impact, on their choice” of study for 30 percent of students. The fact that the HEART Initiative focuses on public service-oriented majors should attract more students into these fields.

This is the second initiative launched by Carberry that takes head on the issues of college cost and student debt. In March, Quinsigamond and Mount Wachusett Community College partnered with Worcester State University and Fitchburg State University to launch the 30k Commitment, which caps the cost of an associate degree from the community colleges and a bachelor’s degree from the universities at $30,000.

Carberry and Retelle have established a leadership position with this public-private partnership, and we hope it becomes a model for future agreements.

The fact that a majority of students from both schools remain in the Worcester area after graduation means Central Massachusetts will be well served by this agreement for years to come.

Very rarely does a win-win scenario actually live up to its name. This is sure to be one of those instances.