Captivating the viewer with the luminous influence of watercolor brushstrokes, pieces depicting the city of Worcester hang mounted in an alignment of elegance. The medium gives the viewer a sense of magic, of a brighter future, and a different perspective on a city that many would not have captured in the lightness of watercolor.

The bricks of the city, once depicted with a harsh point of view, now seem ever so soft. They blend into the street signs and sidewalks. Flowing with a whimsical beauty, the illustrations of “Goodnight Worcester” stand alone in the halls of the Hanover Theatre for the Performing Arts. 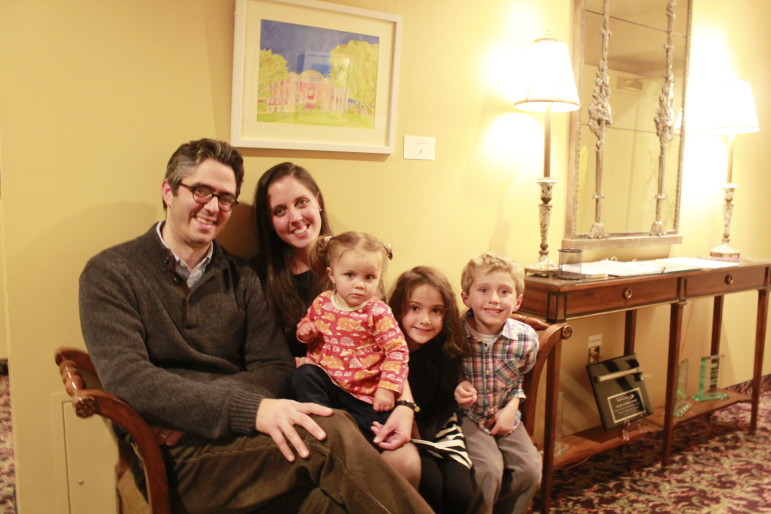 Jackie Penny sits beneath one of her paintings with husband Tony, youngest daughter Lydia and twins Sophia and Henry at the reception for her new Hanover Theatre exhibit.

Each illustration was carved with pen, the fine details that embrace the heights and differences along the historical sites such as City Hall. The pen defines the structure and its symbol as the start of life in the city. While the two mediums complement each other throughout the series, they also draw a divide to depict the streets through the colorful and loose imagination of a child, but with the lines of explanation and structure of an adult.

“I love the way my children see and interact with the world,” says Jaclyn Penny, the artist for “Goodnight Worcester,” a children’s book inspired by the iconic “Goodnight Moon.”

Penny’s ability to see through the eyes of her children has given the world a new focal point from which to embrace the love for their hometown.

Penny expresses her inspiration for “Goodnight Worcester” in her artist’s statement: “What started as a poem turned into a children’s book with illustrations when my children were born in 2010, has evolved into artwork to speak without text. The resulting exhibition offers a portrait of the city through illustrations. 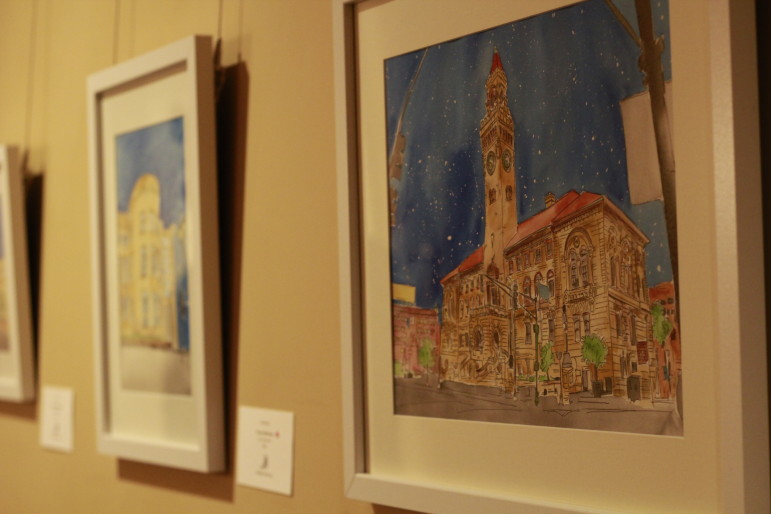 A portrait of City Hall hangs next to one of Worcester Public Library in Jackie Penny’s Hanover Theatre exhibit.

“The pieces in pen and watercolor were drawn with children in tow and meditated on once I had a chance to flesh out, deepen and color the pieces. …

“The work in this exhibition uses the city as a tool including its triple-deckers, space suits and rockets, buildings, streets and parks. … The time of day, the light, the snow, seasons, and architecture – things that might look stale to adults (myself included) were thrilling to my children. I made a commitment to communicate a message to them of their environment and relationship to their space.” 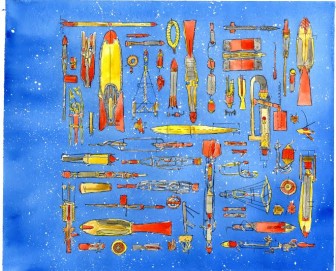 Working at the American Antiquarian Society for more than 10 years has allowed Penny to expand her depth in art, collection and graphic design. There is a bright-eyed freshness about Penny and her intriguing view on art, literature and all that cultivates the creative vessels of an artist.

“One of the amazing things about working in an archive is being witness to the different ways people use it. People have used it to create historical monographs and articles but also plays, musical performances, historical fiction and graphic art pieces. There is no ‘one’ way [or right way] to use it,” said Penny, when asked about the influence of the American Antiquarian in her work ethics.

“I’m just now beginning to experiment with how to translate these material fragments through illustration. One piece in the Hanover exhibit which uses this form of narrative storytelling is the one with Robert Goddard’s rockets. To create this piece, I combed through Goddard’s published volumes of papers which included his manuscripts, formal patents and documented archival photographs and filling the page with illustrations of them. Assembling the piece using these primary sources put me in the rare seat of someone combing the archive to tell a story of their own. It was really neat,” she said.

Worcester faces many challenges, but what it does not face is a shortage of creative culture, historical importance or a platform for inventive economic growth. 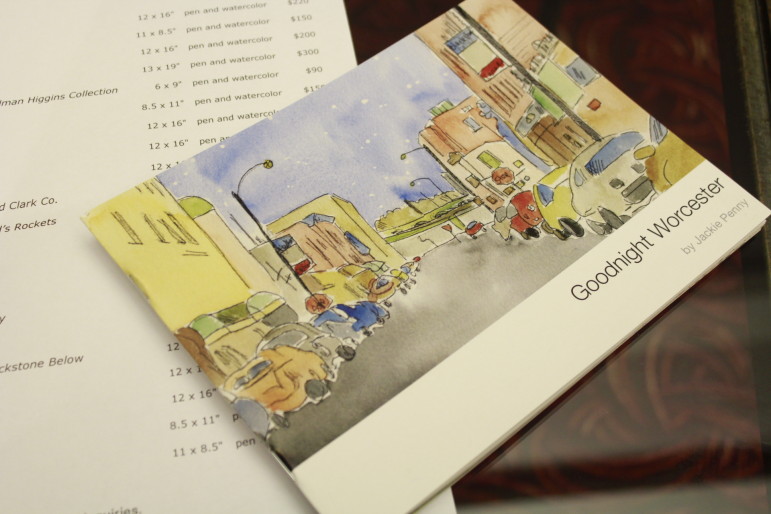 A copy of “Goodnight Worcester,” the children’s book that inspired the new Hanover watercolor exhibit by local artist Jackie Penny.

While Penny said she plans to continue adding to her portfolio of books and illustrations to capture the city’s growth, she will also continue to promote artistic expression through her family.  Her next body of work showcases the artist and view of life within Sophia, her 5-year-old daughter, who — along with her twin brother Henry — birthed “Goodnight Worcester.”

To see the “Goodnight Worcester, Revisited” exhibit, which is free and on view at the Hanover Theatre through March 22, reach out to Arts Worcester to set up an appointment.

A portrait of City Hall hangs next to one of Worcester Public Library in Jackie Penny’s Hanover Theatre exhibit.

This article was originally published in the Nov. 22, 2015 edition of the Sun.