Helping one of their own in need.

That is the sole motivating factor behind the decision by a group of Auburn High School student-athletes to organize a fundraiser for Nicole “Nikki” Berthiaume, the young woman who had her right arm severed in a boating accident in Boston Harbor on May 30.

Berthiaume, 20, is a 2013 Auburn High graduate. She lives in town with her mother, Debi DePasquale. While at Auburn High she was a participant in many student activities and was a member of the girls golf team and girls track team, and she served as a manager for the varsity football team. 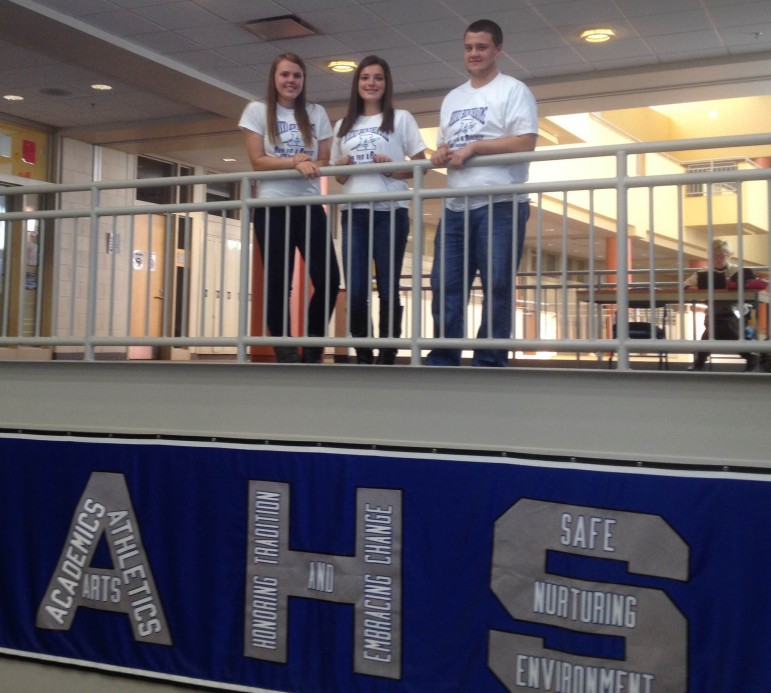 The AHS Leadership Ambassadors – seniors Emily Sarkisian, Conor Scully, Samantha Moreau, Dean Lemansky and Riley Simmons – decided in early September to hold a benefit for Berthiaume to help defray some of the costs associated with the accident.

Run for a Rocket, a 5K road race which will start and finish at Auburn’s Lemansky Park, will be held Sunday, April 3, 2016, with a rain date of April 10. The race will get underway at 10 a.m., and will be followed by a cookout for the race participants and their families, as well as friends of the Berthiaumes. The entry fee for the race is not set yet but is expected to be in the $20-$25 range.

During the race the runners – who are being asked to wear a white T-shirt while participating – will be showered with blue and gray paint, Auburn High’s team colors.

“Mr. Davis, once he became the athletic director, wanted to find ways that the Auburn High community could make a difference in town through athletics,” Sarkisian explained. “When Nikki’s accident happened he really wanted to do something that would help her and her family, and at the same time help the community help one of its own as a way of healing the hurt.”

Davis suggested the Run for a Rocket idea to Sarkisian during the summer. Sarkisian immediately liked the idea and shared it with the other AHS Leadership Ambassadors the first week of school. Scully, Moreau, Lemansky and Simmons were all in as soon as they heard about the plan to hold a fundraiser for Berthiaume.

“It was Mr. Davis’ idea,” Sarkisian said. “We just helped round it out.”

Davis explained that the Run for a Rocket fundraising idea was actually a collaboration between himself; Bill Garneau, Auburn’s former director of athletics; and Jeff Cormier, the Rockets’ longtime varsity football coach.

Scully said the entire leadership group, as well as the Auburn High student body, has embraced the fundraiser.

“The feedback has been great; a lot of students are planning to participate,” said Scully, who added that there has been discussion to make the fundraiser an annual event to benefit a town resident or family in need. “If there’s not a town resident or family in need in a particular year, then the proceeds of the fundraiser can go to giving out an additional scholarship or scholarships at graduation.” 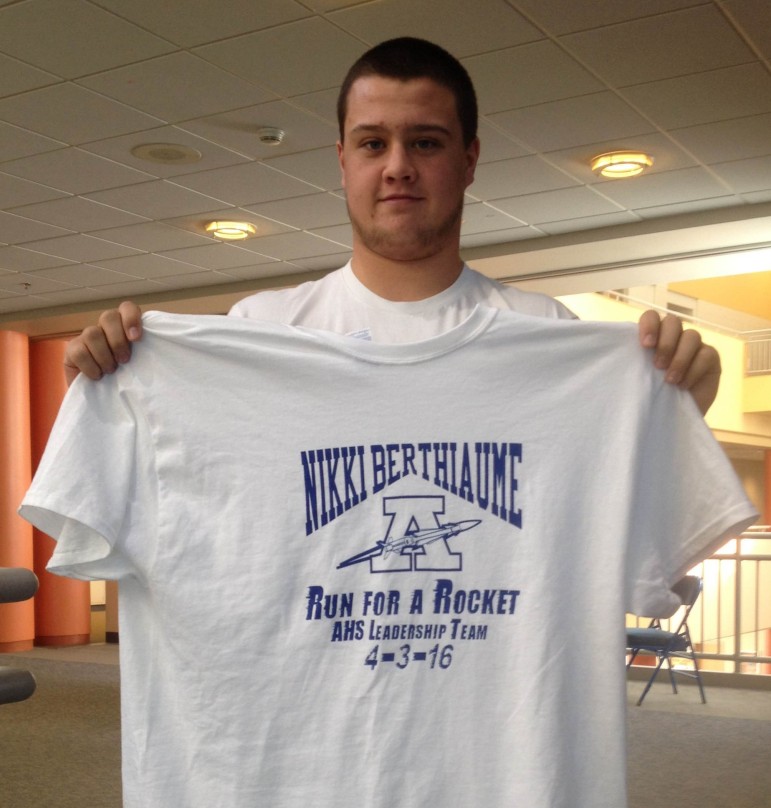 Conor Scully shows off a Run For a Rocket T-shirt.

When Scully was a freshman member of the Auburn High football program, Berthiaume was one of the varsity team’s managers.

“I remember her on the sidelines during games, but I didn’t know her,” Scully said, alluding to the fact that at Auburn, like at a lot of schools, seniors and freshmen don’t have a lot of interaction with one another.

“It’s pretty cool to be part of the group that’s starting this whole thing,” Scully said. “Hopefully it will be one of those can’t-miss events and we will come back to town in 25 years and be able to say, ‘My class started all this.’ ”

Lemansky, like his fellow ambassadors, is excited to be helping out.

“I think it’s a great idea,” Lemansky said. “I was completely on board as soon as I heard the plan.”

Simmons is also looking forward to taking part in assisting someone who walked the same high school corridors she has walked the last four years.

“I immediately liked the idea; I want to be part of something that will help a fellow Auburner,” said Simmons, whose brother Tyler graduated with Berthiaume. “I feel for her. I feel awful for the situation she’s in and what she’s going through.”

“The T-shirts are $10, but everyone who signs up to run the race will get one as part of the entry fee,” Moreau said. “We’re also selling them in school at lunch. We sold them at Homecoming, too, and will probably sell them at the home basketball games this winter as well.”

The T-shirt sales, especially during lunch, have been brisk, Moreau said.

“I wasn’t sure how well the T-shirts were going to sell,” Moreau said, “but a lot of students have already bought one and a lot more students are interested in buying one.”

“During the meetings with them we got to hear their story about the accident, how they are handling the situation and how Nikki’s doing,” said Sarkisian, who added that none of the AHS Leadership Ambassadors have spoken to Nikki. “I think she’s excited about the fundraiser, from what her parents have told us. And they told us – several times – how thankful they are that we’re doing this.

“It feels good just to be helping another person,” Sarkisian said. “But, because that person is someone from town, someone who went to school here … I mean, why wouldn’t you help if you can?”

It’s that time of year again.

Last week the Massachusetts Interscholastic Athletic Association released its realignment proposal for Central Massachusetts for 2016. The revamped divisions would be as follows:

Don’t be alarmed if your school is not where you think it should be, as this is just the initial realignment proposal. It does not take into consideration teams that will decide to opt up into another division (St. Peter-Marian routinely does this) or teams that despite the calculations will ask, for varying reasons, to be placed in a division lower than the calculated enrollment would dictate.

Let me know what you think. Email me at kpthesportsguy@gmail.com.