All very nasty substances discovered in the ground at the future Worcester Regional Transit Authority maintenance garage on Quinsigamond Avenue. The land was the site of a former manufactured gas plant built in the 19th century in Worcester’s big wave of expansion. 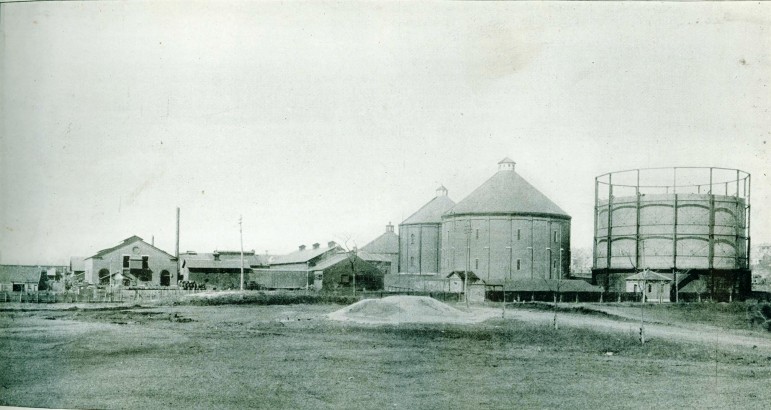 While today we burn natural gas for cooking and heating, in the 1800s coal was liquefied to produce a flammable gas. It was then piped underground to businesses and homes to provide an alternative to burning coal or wood, two fuels that were dirty and labor intensive to use.

The gas was also used for lighting and for street lamps throughout the city, replacing older oil-burning lamps that required refilling and maintenance. As anyone who has opened up the walls of an older house knows, gas was installed before electricity. 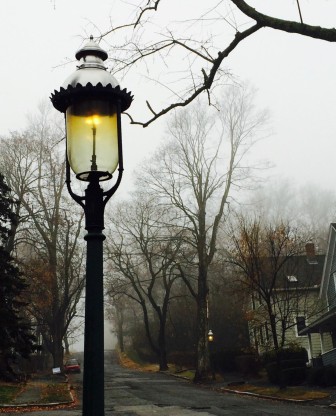 In 1848, upon its incorporation as a city, Worcester shed its New England town-meeting style of government and board of selectmen in favor of a mayor, aldermen and common council. After a hundred-plus years as a small farming community, Worcester had grown to the point where it needed a stronger government to plan and guide the city.

In 1850, Henry Chapin — Worcester’s second mayor — put infrastructure and planning at the center of his inaugural address. Building sewers, paving roads, finishing the water system and extending gas “to a considerably greater extent than at present” were on his agenda.

The development of a gas system in the city is similar to building out broadband Internet access today, or the telephone system in the early 20th century. A complete system was seen as a mark of progress and advancement. In an era long before the environmental movement or even electricity, the byproducts of this process were not understood in the same way that we know them today.

The Worcester Gas Light Company was chartered by the state Legislature in 1851 and was given the exclusive right to provide gas in the city. 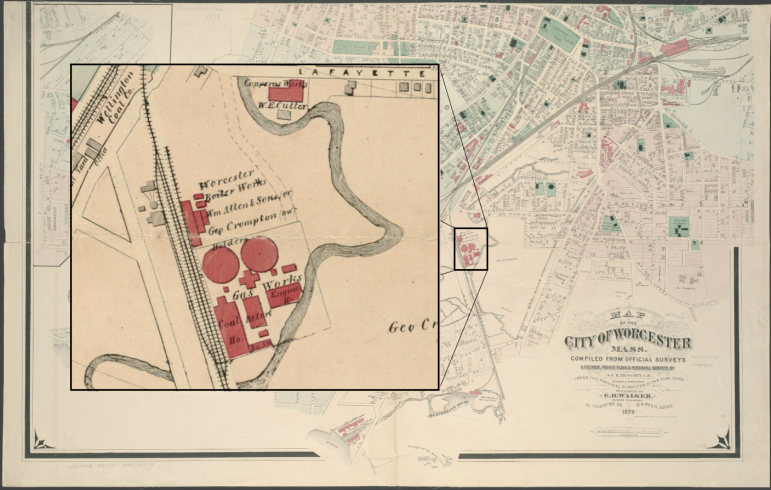 The law allowed the city to direct the gas company where to expand its system as long as it guaranteed a return on the company’s investment for those extensions. Recognizing that this arrangement might need to change, the city was given the option to purchase the corporation and run the system itself. Prices were also set to not put the city at a disadvantage versus other areas. The company was restricted from charging more than the “rates that may be charged for gas of similar kind and quality, in either of the cities of Boston, New York, or Baltimore.”

In the 1870s, the company moved the gasworks from Brook Street to Quinsigamond Avenue, along the rail lines, to better provide coal. After 75 years as a standalone company, the Worcester gas and electric companies combined in 1920s [more than 200 people were employed there in 1927, according to the Worcester Historical Museum] and the gasworks shuttered in 1970.

Once viewed as competitors, the long-term economic pressures on gas manufacturing and the widespread adoption of long-distance natural-gas pipelines caused consolidation of gas and electric companies throughout the industry.

Corporations in the 19th century were very different creatures than those of today. They were regulated in the types of business they could enter, the geographic areas in which they could operate, and even the number of shares of stock they could issue and the price. 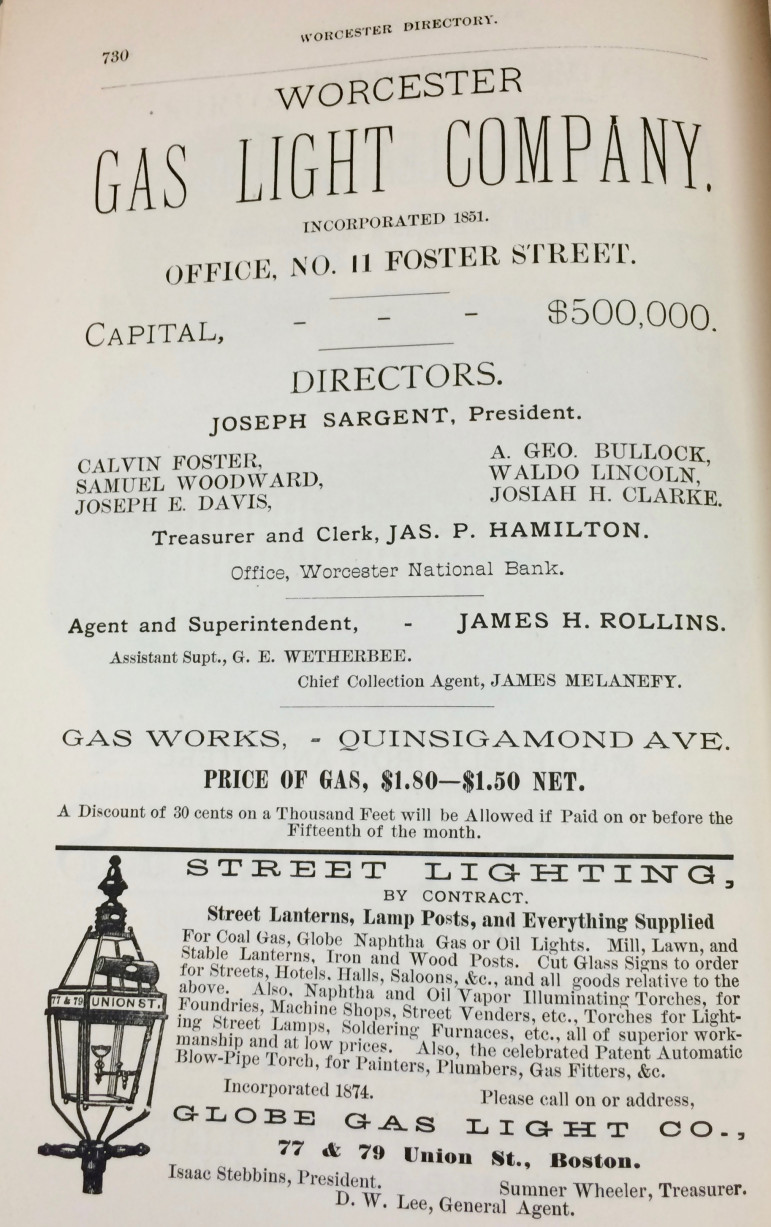 Using estimates done by the U.S. Bureau of Labor Statistics and the Federal Reserve Bank of Minneapolis, $500,000 in the mid-1800s is worth an estimated $14.2 million today. It is still a surprisingly small sum to build the gasworks, hire workers, procure supplies and lay pipe under the city streets. In all likelihood, the cleanup costs for the former gasworks site will exceed the amount spent to build the system.

According to Environmental Protection Agency estimates, there are anywhere from 3,000 to 5,000 former manufactured gas plants in the United States. The earliest gasworks produced flammable gas by heating bituminous coal in an anaerobic (low oxygen) vessel. This created a highly impure gas that was filtered through water and lime, leaving behind contaminants and coal ash, or coke. 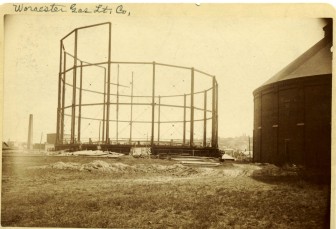 When the gasworks on Quinsigamond Avenue was constructed in the 1870s, technology had jumped forward with a Pennsylvania professor’s invention of carbureted water gas.

This process injected petroleum to liquefied gas, resulting in a more efficient fuel and increased consumer demand. While many of the byproducts were contained or reused, residual contaminants still remain at former manufactured gas sites across the country.

Prior to the introduction of gas light, the two main ways of lighting a home were through candles and oil lamps. A significant amount of labor was required to keep a home lit and heated.

Today, New England is well-forested and people often use wood stoves as an economical supplement to oil, gas or propane heat. The landscape was very different in the 19th century. The majority of the land had been cleared of trees, and people were looking for alternatives to wood. Some went as far as experimenting with cutting and drying peat on farms outside of Worcester.

Like many of the great technological achievements, piping manufactured gas to homes and businesses took a labor-intensive process and made it easier.

This article was originally published in the Dec. 6, 2015 edition of the Sun.