[Editor’s note: Nicole Bell, 35, of Worcester, is a survivor of sexual exploitation. Last Monday, on National Human Trafficking Awareness Day, she shared her story at a City Hall event sponsored by the Worcester’s City Manager’s Advisory Committee on the Status of Women. The Sun was struck by her honesty and candor. Her story is poignant and deserves to be shared. Bell now works to help others as an aide at the Everyday Miracles Peer Recovery Center.]

Today was the first time that I have spoken publicly about my experiences on the streets, and more importantly my recovery from all of it and the support I received from not just other survivors but the community as well. 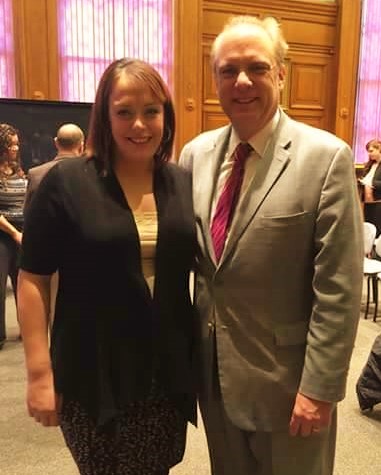 It was nerve-wracking and empowering and amazing and scary, and the list goes on. I never thought I could recover, yet here I am. Thought I would share what I said so my family could hear it.

I was a victim of sexual exploitation as a teen and most of my adult life. I spent the majority of my adulthood between street corners and jail cells. Before the exploitation I had hopes and dreams like every other young girl … and those weren’t them.

Before learning that I was a victim and that I did not choose this life for myself, most nights were filled with self hatred and blame. Thought all the dreams that I had as a young girl would be just that … dreams.

Before my last incarceration I was ordered to attend a court-mandated program for women like myself. Two survivors came in and spoke, one a now well-respected community leader. She spoke with a fire in her eyes. She spoke of her family, her work, and how the wreckage from the streets no longer ruled her life.

I will not say “recovered” because I don’t believe it’s possible to recover all that the streets have taken from us, but she had something that I wanted. For the first time in what felt like forever I had a moment of hope.

But it became just that as I returned to the streets and very shortly thereafter jail again.

This time when I finished my sentence there was a lot of work going on around the city to address the issue of sexual exploitation. I went to the woman who had previously given me that glimpse of hope and she gave me a little more.

She introduced me to another survivor, Melissa. They kept me close and promised me that if I didn’t use and began to heal, my life would get better, and slowly but surely it did.

I was invited to a quarterly WAASE [Worcester Alliance Against Sexual Exploitation] meeting and for the first time in what seemed like forever my voice was valued.

To be sitting around the table with Capt. Saucier, Dr. Garcia, and my personal hero Athena Haddon, and having my opinion matter and help, helped me to be able to pick my head up just a little bit. So I continued to come and became more involved to do what I could to help the women still suffering on the streets.

I became a valuable part of the fight to end exploitation in the city of Worcester.

The support I received from the other survivors was key to my growth and recovery. I began LIFT [Living In Freedom Together], a survivor support group.

For years I numbed the trauma and violence on the streets with the drugs. So when I put them down things started happening that I didn’t understand. These women helped me to understand why I was afraid to go home at night for seemingly no reason at all.

They helped me to process the horrible nightmares that left me without sleep for days because I was fearful to go to sleep. It became a safe place for these women and myself to talk about and process these issues that nobody else could possibly understand.

We wanted to do more for the women still heavily entrenched in the streets. We recognized that the women who needed the services the most would not come to get them. So we partnered with Lora Glenn at the Woo [The Woo Church] who opened not just her doors but her heart to us and the LIFT drop-in began.

At LIFT we provide tangible needs to the women such as food, clothing, shoes and hot soup made by one of our volunteers. LIFT volunteers consist of survivors, students from Clark, a nurse, city officials and community members. The most important thing we provide is a safe non-judgemental environment. We ensure that if only for one night, they are not cold, alone and afraid.

This may not seem like much to some but to these women it’s a lot.

We are building trusting relationships with the women. They know if they are not ready it’s OK, but when they are they know where to turn. They are learning to trust the systems that had once failed us. I am proud to say that the [Worcester Police] is doing an amazing job going after the real perpetrators and addressing the demand in this city.

For many years the women were arrested 10 times more than the men, and always without services. Today that is no longer the case.

I am proud and grateful to say that I am part of the team that is notified when the sweeps are taking place. We are no longer arresting the issue out of sight. We are now treating these women like the victims that they are.

Community partners such as Spectrum Health Systems and Community Healthlink hold beds specifically for the women on these nights. Pathways, Daybreak, and the YWCA make services available for rape crisis and domestic violence. Many women who entered treatment this way remain there today and if not that’s OK too. Lord knows it took me a million tries and here I stand today.

We also have an awesome working relationship with some of the district attorneys. Eddie and Liz contact Melissa and myself when they have a women in need of our services. To be working with them is an honor and I’m beginning to realize that those dreams I had as a young girl just may be attainable.

This really has been a complete community effort. The same community that I had felt looked upon me with judgement and objectified me, now embraced me. They all began to cheer on my small successes until those small successes became big ones.

I have been afforded amazing opportunities along my journey. I was able to take a public health class at Clark. You have no idea how it felt to walk across the campus I had once been ordered to stay away from.

I have been able to attend two conferences and have met sisters from around the globe. What I haven’t learned through my own hard-born experience I am able to learn at those. I am using my once silenced voice to fight for the women who can’t speak for themselves.

With the support of this task force, this community, and most importantly, my survivor sisters I have transformed from a victim, to a survivor, to a leader in this community in the fight to end exploitation in the city of Worcester.

3 thoughts on “In Her Own Words: Nicole Bell, A survivor’s story”