It was 2004. The rains had just began closing in. The place was muddy and mostly unpleasant to look at, especially the market area of Serrekunda.

My editor-in-chief at The Point newspaper had urged me not to move around at night. My nephew and son were delivering my news items at night, but Deyda Hydara, my editor, had advised me to stop because they were kids and it was more dangerous for them than me. 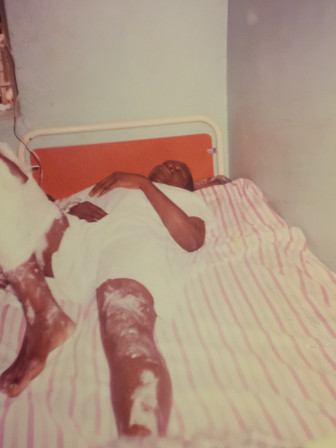 I had them deliver my stories because of the problem with my unbending knee. It was uncomfortable, and I could not run if I were attacked, which was always a possibility.

I had started taking an online course in journalism about a year before my decision to move on to Freetown in Sierra Leone to correct the mistake the Egyptian doctor had made in Gambia.

I reported news even from the hospital, where drugs would go to the wrong hands. Bribery was rife in big places, but dictatorial tendencies made journalists afraid to report on it.

An online paper called Freedomnewspaper.com touched the most sensitive areas of the Gambian society. It made a difference. However, association with the paper meant death or disappearance.

My knee still remained stiff and could not bend. I tried my best, working assiduously to make ends meet and to reserve some for my next trip to Sierra Leone for another operation.

It was early October. Gambia makes a lot of news at the beginning of the dry season and the end of the rainy season. My sources called me from one corner to the other. Most of them trusted that I would save them by publishing news that was quite close to their heart.

A young night watchman from a village named Gunjur hanged himself in his studio. He had slept there without paying but cared for the house. He had been there for five days when my source called me and asked me to join their police team.

I was not allowed to write or talk much. I left both my recorder and notepad but took my pen, which I did not use. I wrote the story and it was accurate even without writing and recording. It was the biggest story the next day. I had made it again.

Was my work without its usual challenges? No!

Mrs. Ellis, a university professor who had seen me earlier on TV, called me by my real name while I was covering the story with her son. I said it was not me and cut her off quickly. She spoke English Creole (broken English) and I denied being a Sierra Leonean, but she refused to believe me.

I wrote about her in my story, about how it could not have been possible for her to not know there was a dead body close by because of the stench. Her son came to attack me at the Point office, but I solved the problem and later became their best friend. We all believed the story was factual; the truth had been told.

One day I was told I was wanted for questioning by the National Intelligence Agency [NIA] for reasons that weren’t apparent to me. I left for the airport the next morning before they came around.

The airport was not busy. My wife was with me, and I was taking my three-year-old daughter with me to Sierra Leone. My daughter Mary was a source of courage for me. I could not cry because I needed to show her toughness in life by not crying in front of her openly. She was very close and attached to me. I could not afford to leave her, even with her mother.

I arrived an hour later in Freetown, Sierra Leone, with mixed feelings. My operation was bigger than I wanted to believe. With an unbending knee I asked how it could ever bend and how I could start running, even at a jogging pace. My soccer life, my running and my marathon life were just memories. I thought the operation would revive all these.

I arrived in Freetown with no information about my brother and sister, who lived in the airport town of Lungi. I did not tell them I was coming again. A friend met me at the airport and hired a taxi to take me where he knew my brother and family lived.

My brother was a catechist/teacher, my sister a police officer. They got lost during the war only to surface in Ivory Coast and Liberia, and later back in Sierra Leone. They were lucky.

This was a good time for renewal and good health. 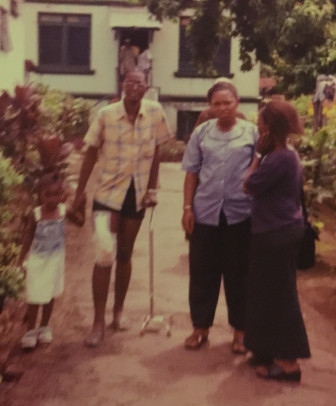 I was taken around the police station to be introduced to my sister’s coworkers and bosses. She introduced me by saying, “He is a journalist in The Gambia.” That kept them from thinking I was there to get information from them or write about them. That was not my intention at the time.

Many of the police officers who listen to the British Broadcasting Corporation [BBC] African Service under the Focus on Africa program would have heard my name over and again because I contributed to it several times even though I was not a stringer for them.

I met the doctor that my brother introduced me to. They were classmates.

The operation cost me a fortune. “There is no brother in the war,” he said. He examined my leg and opened his big medical book and said: “There is stiffness in the tissues. The soft tissues have all crumpled and become stiff. I will need to remove all the soft tissues if you allow me.”

He looked determined. I was happy. I didn’t know how I was going to pay him, but I kept my faith in God.

The doctor told me the operation would cost $2 million Leones, which is about $300. Saffea, my brother, paid a third. I had saved a third. I was left with only $100 to complete for my operation. I tried to contact some priests, and I got Father Piero Lazarini, a Xaverian missionary, to promise to help.

One evening I got a call from an unknown number. A woman asked if I knew her. Yes, I said. It was a girl from my village who I had sex with in January 1989. It was in 2004, and she called to say she had a gift for me. “What is it?” I asked curiously. “I can’t tell you,” she said. “Then send it by DHL,” I said in my gentle voice. At the time I thought it was a very good gift to help me since I was going to be operated on and lacked money for food.

“OK,” she said, “I know you are growing old but [you] cannot stop your jokes. I will send the gift tomorrow to my sister, and they will call you to pick it up.” This was close to my operation. My brother Peter A. Mustapha and I went to pick her up. The rest remains a story to tell.

The operation was done the next morning with tiny rain drizzling outside. I could hear the rain hit the zinc.

The doctor administered a local anesthetic. I felt the first cut on my leg, and it was painful. It felt as if someone was killing you and you are incapacitated and can’t fight back. I cried and told them I could feel it.

Dr. Bundu asked, “Where do you feel the most?” I said, all the area you have cut from top to down and right in. They had to pause to continue later. It was the most excruciating operation I ever had.

There was no ambulance to take me to Cupid Home, where private doctors would take their patients. I had no money or food as I had given the $50 to my newfound child that her mother sent me as my gift.

I was taken out of the hospital and placed outside where I was soaked in pain of its highest kind. I was then taken to the doctor’s car. They forced me in with some parts of the leg outside because of my height. We managed to go.

I prayed in pain. I asked God to bring back my grandmother, who had been killed in the rebel war. I could not sleep. My leg was folded and raised up against the wall. I cried day in and day out The doctor was nowhere to be found.

The pain eased when my leg was removed from the plaster. The hospital was like a prison for me. I had to pay a lot of money and I had nothing. Well, that was already my life.

My little daughter Mary could visit me for the first time in weeks. I missed her so much. Our reunion was superb.

I was discharged after my friend, Father Lazzarini, sent me some money that paid barely for the bill I had incurred. The rest was done at home. My troubles began again after my discharge.