Over his 21 years as head coach of the Worcester State University men’s basketball team, David Lindberg doesn’t recall ever having four players from Worcester on his team at the same time. 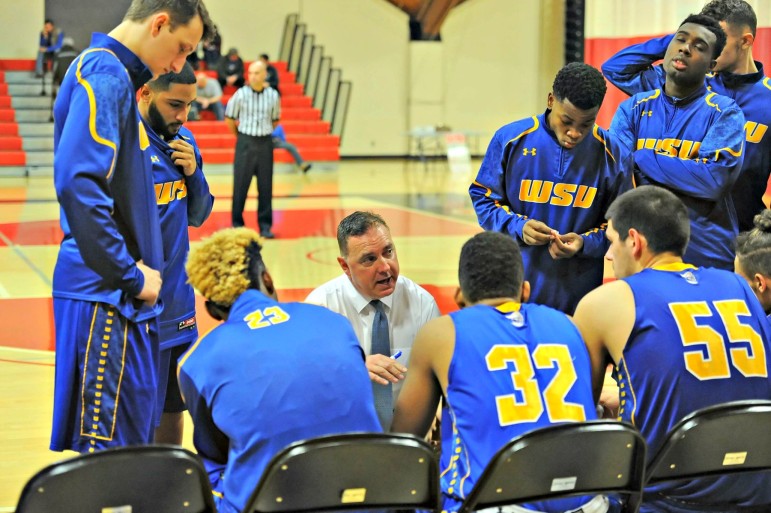 “They all knew each other before they got here. They’re all pretty good friends,” said Lindberg, a 1991 Worcester State grad. “Certainly that helps with their team chemistry. They all had a bond before coming here.”

“All the four kids from Worcester actually played against each other [in high school], so it’s good to play with each other now in the city that we’re from,” Mustapha said.

“I was born and raised here, so to be from Worcester and to play for Worcester State is a great thing. I want to be one of those people that brings a championship to Worcester State. It’s been awhile since we’ve been good and I’m glad I can be a part of it so far,” said Shakir, in his first year at WSU after transferring from Quinsigamond Community College.

“I love that my family and friends can come to the games and watch me play. It motivates me,” Shakir added.

Shakir was named the Massachusetts State Collegiate Athletic Conference Player of the Week for Nov. 16-22, when he averaged 22 points, 7.6 rebounds and 2.6 assists in three games [WSU went 2-1]. 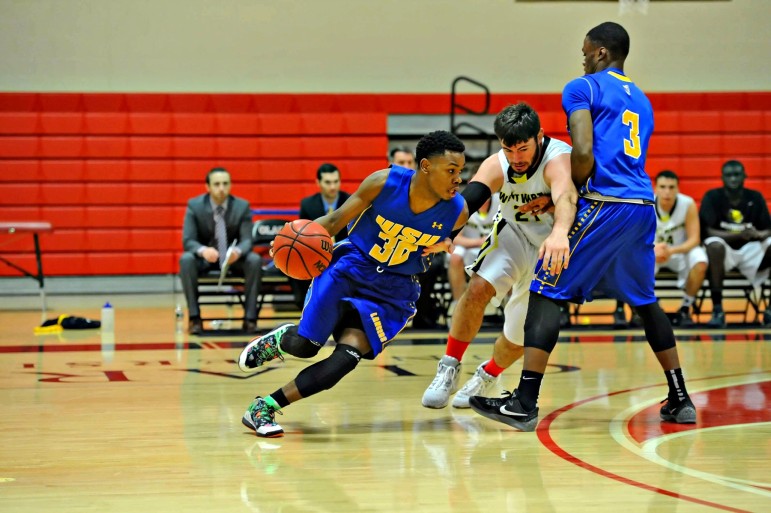 Bilal Shakir works off a pick from Jamal Mustapha during the Lancers’ win over Wentworth at Clark.

“Shakir has added an explosive scorer to our team. And he’s carried our team on his back at times. He’s really given our whole team a boost of confidence,” Lindberg said.

Coming next Sunday: More sports coverage, as Ken Powers returns with The Score.

Mustapha, a 6-foot guard and transfer from UMass-Dartmouth, is averaging 7.2 points and 5.3 rebounds per game [good for second on the team] and, like Shakir, played in the first 16 games of the season.

Mustapha, also in his first year at WSU, said he transferred for academic purposes; he thought he had better opportunities at Worcester State.

On the basketball court, Mustapha is making the most of his opportunities. He’s started four games this season for the Lancers and is averaging 18 minutes per game, a far cry from the 60 total minutes he saw in 10 games with UMass-Dartmouth.

“For Jamal, the way we play is really advantageous for him. We like getting up and down the court and scoring under the basket and in transition. Jamal does a lot of his work off the ball, on the backboards and in transition,” Lindberg said. 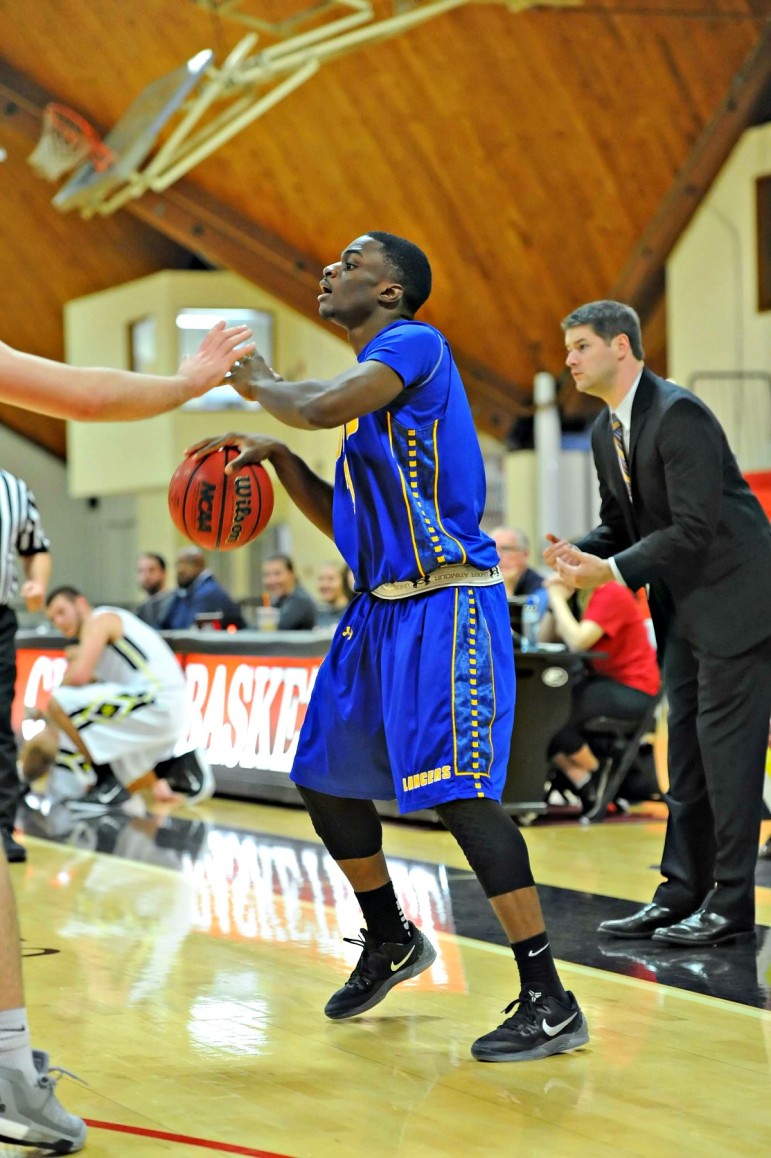 Jamal Mustapha, a junior from Doherty, handles the ball on the perimeter.

Mustapha said, “I’ve been working on different things since I’ve graduated high school. Back then, I was known as a scorer. But coach [Lindberg] told me, ‘Everybody can do what you can do. You need to work on the other things.’ So I focused on becoming a better rebounder.

“The stats may not show it, but I’ve been working on my defense this season, too. And when I get the chance to score, I’ll take it.” 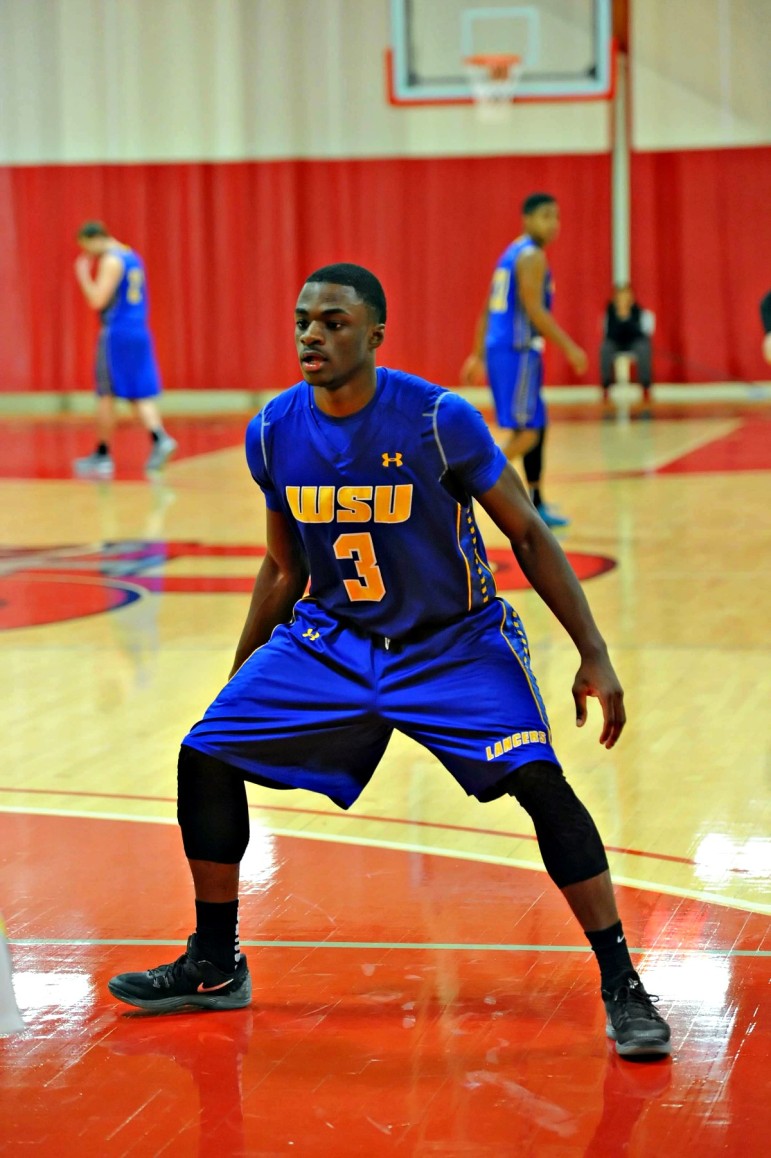 Jamal Mustapha is a key bench player for the Lancers, with 7.2 points and 5.3 rebounds per game.

Unfortunately for the Worcester foursome, they haven’t — and won’t — be able to play together on the Chandler Street campus this season.

For the third straight winter, the Lancers have been hosting opposing teams at neutral sites across the city and state while WSU completes construction of a new Wellness Center.

“It’s been a long three years. I can’t wait to play there,” Lindberg said.

The new $52.6 million, 101,000-square-foot athletic center will replace the former gymnasium that was built in 1958. The complex, which is expected to open this fall, will house a multipurpose gym, student health facilities, a fitness center and a golf simulator, among other amenities.

“I’m looking forward to playing in our new facility next year and getting that home-court advantage playing in front of the home crowd. I can’t wait,” Shakir said.

This season, the team has played home games locally at Clark University and Assumption College, and as far away as Amherst College.

“For the most part, it’s been challenging because we’re never in the same spot,” said Shakir of having to play “home” games on the road. “We never really get a home-court advantage. It’s been tough. There’s a lot of obstacles with practice and games, but we manage it.” 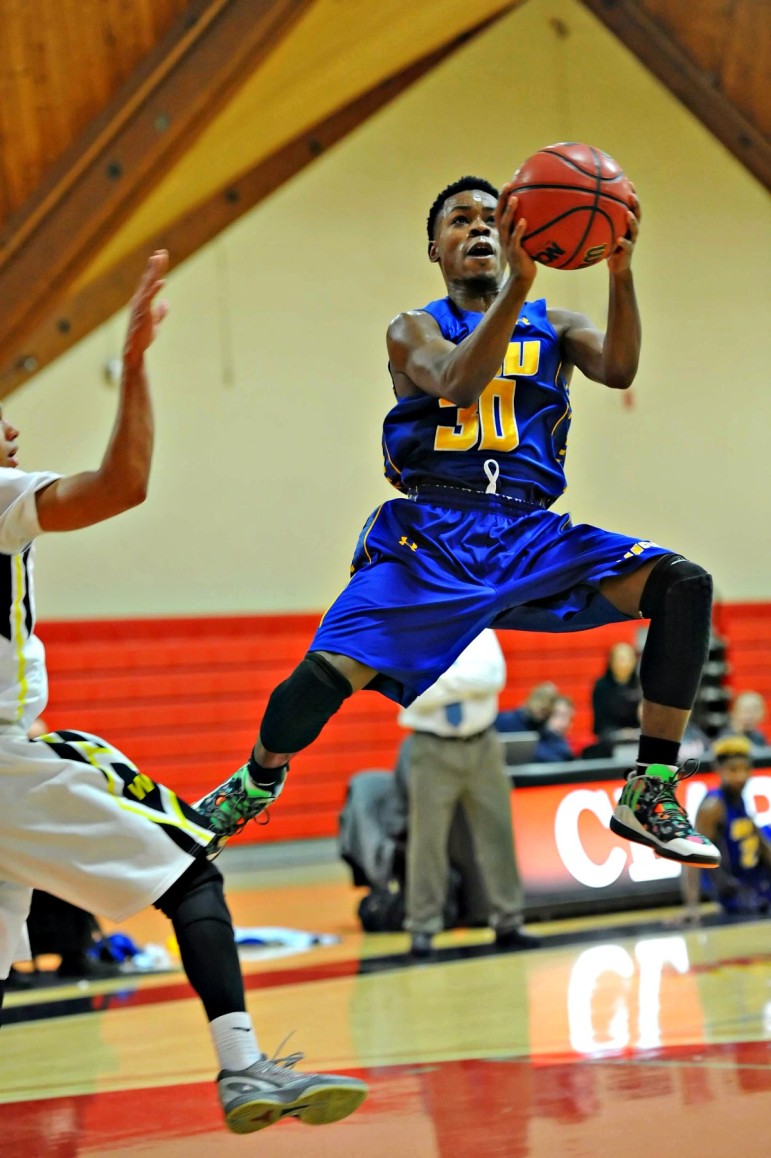 “I feel like we’re a closer team because we spend more time in non-traditional ways than if we had our own gym and could just walk on the gym floor to see each other,” Lindberg said.

“We’re still playing at places like Clark and Assumption, so it’s nice to have family and friends still be able to drive right up and see us play,” Mustapha added.

They will play upcoming home games at Clark, WPI and Fitchburg State.

“I feel like we have to play better defense than we did” against Salem State, Shakir said. “Some of our rotations weren’t there, our ball pressure wasn’t there – little things that could change the game. We need to cut down on our turnovers. We turn it over at the wrong time.”

“We need to keep doing what we were doing [before the Salem State game],” Mustapha said. “We’ve come a long way this season.”

“I feel like we played a little too light against Salem,” said Lindberg. “We need to focus more on what we need to do. Maybe the five games made us overconfident. But we’re grounded again and we will get back on the right track.”

The Lancers’ next game is at 8 p.m. Wednesday, Jan. 20, against Bridgewater State at Fitchburg State University.