Those rallying for Democratic presidential candidate Bernie Sanders last Saturday at North High School came early and in force. Not since President Obama addressed graduates at Worcester Technical High School have so many been so eager to gain entry to any public school in Worcester.

At 4:30 p.m., as I stood near a “Blind Driveway” sign on Harrington Way, a nondescript sedan pulled over, and the senior senator from Vermont emerged. Smartphones recorded a blur of handshakes, shouts of support, and Sanders’ grin.

If anyone was cold, they forgot about it.

By 5 p.m., the gymnasium was full, as well as two side auditoriums with audio/visual feeds. To his credit, Sanders stopped in to greet each of the overflow crowds and preview the points he would cover.

I’m not a Democrat, but this rally had an unscripted authenticity that many lack. What Sanders says, he believes, and has believed throughout his adult life. Nor is there any doubt that the enthusiasm for him is sincere. 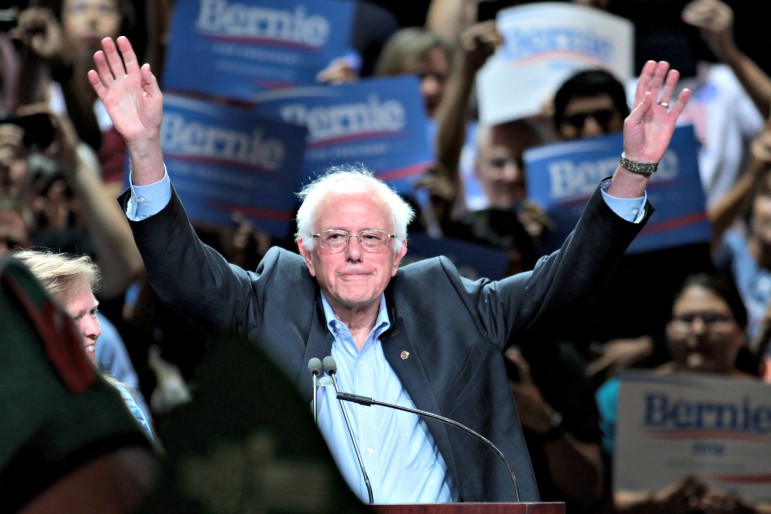 Bernie Sanders knows how to hold a rally, but will his sincerity trump Hillary’s lack thereof?

It all compares favorably to the Stalinist choreography of a Hillary Rodham Clinton campaign event, where claqueurs abound, people are planted in the crowd to ask certain questions, and the media are trying out for a softball team.

I agreed with several points Sanders made, including that our nation should emphasize education over incarceration, that men and women should enjoy equal pay for equal work, that Wall Street malefactors should be jailed, and that we should do better for our veterans.

Sanders correctly notes the real unemployment rate is about twice the reported rate, but his call for a national jobs program is a shovel-ready pile of nonsense.

Have we learned nothing from eight years of Obamanomics, not to mention the Roosevelt administration’s big-government efforts during the Great Depression, many of which made matters worse?

Sanders focuses on economic inequality, but squeezing $70 billion from Wall Street to make public higher education free to all would both cheapen the value of a college degree while slaughtering the animal spirits necessary to spur risk and innovation in the U.S. economy.

Sanders opposes free trade, but free trade is a key component to raising standards of living in the United States and abroad. A turn toward protectionism and isolation would be disastrous.

He insists that climate change is real, and lambastes the GOP for being in the pay of the fossil fuel industry, yet his vision has little room for an expanded nuclear power program, the best bet for meeting energy needs while reducing carbon emissions.

Most troubling was Sanders’ vow that any Supreme Court nominee would have to declare their intention to overturn the Citizens United ruling on campaign financing.

If you read Citizens United, you might appreciate why the Court ruled as it did, in defense of the rights of individuals, corporations and unions. But more to the point, no jurist should declare how they might rule on any topic or case before it is heard, nor should a president set such a litmus test.

By now, you might be thinking I would never vote for Sanders. But you would be wrong.

I might do so in March, simply because it’ll be a chance to vote against Clinton. Sanders’ radical revolution may never happen, but at least it is an honestly held set of principles, whereas Clinton’s mix of greed, hypocrisy and opportunism is simply revolting.

I’d rather Americans have at least one honest and sincere person to vote for in November, even if I disagree with him on most issues.

But never mind me. The real issue here is what Sanders supporters will do. The March vote is easy. But if you really believe in this political revolution, you should vote for him in November too, whether or not he’s the Democrats’ nominee.

Some of you say you prefer Sanders over Clinton, but would support Clinton over any Republican. Really? Have you followed her career and that of the foundation that bears her name? She embodies many of the qualities you profess to hate – ever-shifting positions, double speak, and a willingness to trade political influence for cash.

No one knows who the finalists will be on Election Day 2016. Much can happen between now and Nov. 8. But whatever your beliefs and principles, stick to them. Vote for the best person you can find.