Consider National Review versus Donald Trump. NR’s “Against Trump” issue features 22 conservatives offering well-reasoned arguments why Trump should not be the GOP standard-bearer.

“But trumping all this is a greater flaw presented as his chief strength. Governing a great nation in parlous times is far more than making ‘deals.’ Compared with the weight of the office he seeks, his deals are microscopic in scale, and as he faced far deeper complexities he would lead the country into continual Russian roulette …”

Helprin indulges in some fun – “hair like the tinsel on discarded Christmas trees” – but it’s on-point, superbly written, and grounded in Trump’s words and deeds. A Trump presidency, Helprin concludes, would be “yet more adventure tourism for a formerly serious republic.”

Hard words, and worth answering, but not with personal, homophobic, anti-Semitic and sexist attacks. Yet, as reported by NR’s John Daly, such were the rebuttals offered by some Trump supporters.

Trump himself simply said National Review (founded in 1955) is  “failing badly” and “not going to be around long.”

Well, time will tell. But the point is this: Why can’t a political party have a spirited and serious discussion of their front-runner without one side resorting to name-calling?

(Nor do I exempt Democrats, who are either too infatuated with Bernie Sanders to challenge the substance of his policies, or blithely swallow the nonsense that Hillary Clinton dispenses under the guise of “gravitas.” In short, one party courts fratricide while the other weaves a conspiracy of silence.)

Is there any antidote? Well, if all politics is local, let us turn back time to the evening of June 24, 1898, when Worcester’s luminaries gathered in Mechanics Hall to mark half a century as a city.

Among the orators that evening was Superior Court Judge Frank P. Goulding, a Grafton native who grew up in Worcester, attended Dartmouth, and returned to the city for a long, brilliant career. Briefly in the state Legislature, Goulding later served Worcester as city solicitor, school board member and acting district attorney.

Goulding is best remembered for his learning and generous spirit. 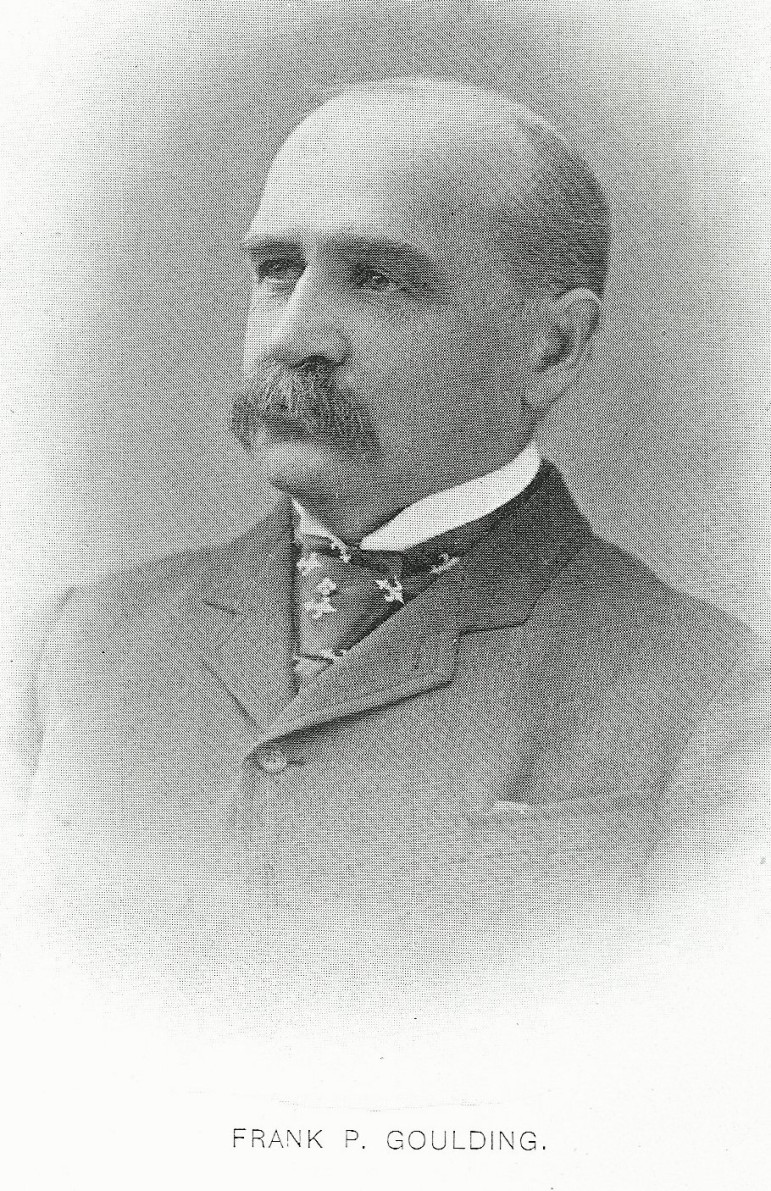 Frank P. Goulding, as pictured in the book “The Worcester of 1898”

“He was a classical scholar of no mean attainment,” wrote Eben F. Thompson in the March 1902 issue of The Worcester Magazine. “Besides his constant reading of his Homer, his catholic taste had made him generally familiar with oriental literatures, more particularly the Persian. He was a student of astronomy, and many a night his telescope would range the floor of heaven thick inlaid with patterns of bright gold …”

Thompson’s piece was a eulogy for Goulding, who had died the previous September, at age 64.

To understand why he was so deeply mourned, consider what Goulding said of Worcester that June night in 1898:

“We pause to-day on the midway summit of the city’s first century to look back for a moment over the path we have trod. … If there are principles and forces underlying and controlling the destinies of men, we would find them out, as far as possible, and learning how far our father recognized these principles and were faithful to them, read the true import of all their successes and their failures.”

And: “Worcester has always been a liberal city. Persecution for opinion’s sake, whether by pains and penalties of the law, or by social ostracism or boycotting, or other uncivilized means and methods, has had little place here …”

And finally: “Our fathers … knew how to make a small town become a great city, but the means they wrought with and the results they sought were the means and results of peace, the agencies of faithful industry, practical sense, equality of right in matters of opinion and conduct, and the impartial diffusion among all the people of the blessings of learning and the priceless boon of liberty.”

I would trade a dozen of today’s politicians for a single Frank P. Goulding. Alas, I can’t find his like anywhere.

Maybe I am just overlooking the next Pericles. Maybe, like Goulding, such great spirits exist, but cannot be persuaded to seek high office.

Or perhaps they decline to do so because they know they will never be heard above the din of the hare-brained and turtle-like who currently hold the field, from Worcester to Washington.

More politics and perspective, and Sina-cism, from Chris Sinacola: