The recent decision by the Millbury Planning Board to approve a controversial solar farm that borders a residential neighborhood in Worcester got me thinking about how we Americans go about saving the world.

I’m not saying the 4.5-acre solar farm being developed by ZPT Energy Solutions won’t have a certain degree of utility. And Millbury officials appear to have acted consistently with zoning laws and legal precedents.

That said, I can’t blame the residents of Worcester’s Flint Pond Village for being upset that they will soon have several acres of solar panels for neighbors. If it were in my neighborhood, I’d be upset, too, but not simply because I think solar farms in residential neighborhoods are an eyesore.

The real problem lies in the numbers. This solar farm will yield 0.57 megawatts of energy.

Now all Americans, as far as I can tell, want to save the planet, and those few who say they don’t will, sooner or later, be persuaded to change their curmudgeonly minds.

This happens when grandchildren show them crayon drawings of windmills, solar panels, geothermal installations, and biomass plants. Throw in a few kittens and puppies, and there are few adults who would be so cruel as to tell the tykes the hard facts about energy.

So if and when the day comes when a grandchild of mine presents me with such a sketch, I won’t lecture about megawatts, land use, toxic waste, return on investment and America’s seemingly insatiable appetite for energy.

I promise I won’t point out that, as of 2014, solar energy accounted for about 0.4 percent of our nation’s electricity generation, and all renewable sources a total of 7 percent, according to the U.S. Energy Information Agency.

And I swear I won’t talk about the toxic substances that are used in the manufacture of solar panels, what happens when those panels have exhausted their commercially useful lives, or the headaches involved in the storage and distribution of the electricity generated by solar farms.

I’ll just ask my grandchild why they want to destroy Indiana.

Rest assured that I have nothing against the Hoosier State, nor do I number myself among those adults who say they don’t care about saving the planet. I’m definitely in favor of saving the planet. The question is how best to go about it.

I mention Indiana because of research by Mike Conley, author of a forthcoming book comparing solar and nuclear energy options. Conley points out that in order to replace the nation’s current electricity generation – about 405 gigawatts per year – we would need to build 500 wind-power plants and 500 solar-energy plants, and every one of those 1,000 plants would have to generate 500 megawatts.

The footprint required for those 1,000 plants would be about 35,000 square miles, nearly the size of our 19th state.

How many such solar plants do we enterprising Americans have today? 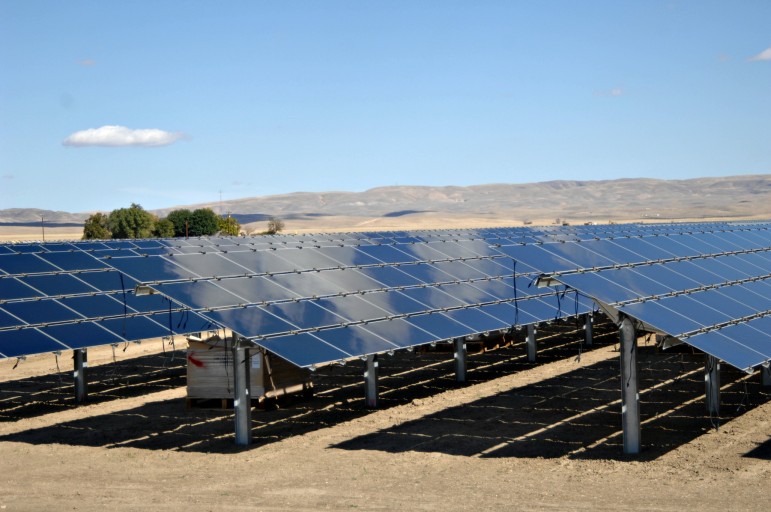 Topaz is producing energy, and it isn’t bothering me or anyone else, but scaling up to the 1,000 or so plants that we would need to go completely “green” would cost more than $29 trillion over 60 years, according to Conley.

We could also reasonably expect more than a little opposition from Americans who believe that we might put 35,000 square miles of federal land to better use than solar arrays and wind turbines.

Although Conley’s book isn’t yet available, it’s clear from his online research that he’s a strong proponent of nuclear energy. He points out that the nation’s electricity needs could also be met by the construction of 1,000 AP1000 nuclear reactors – a pressurized water reactor designed by Westinghouse Electric Company. Those reactors would occupy a total footprint of about two square miles (his numbers).

Realistically, of course, locating 1,000 reactors would require far more land, once one factored in the buffer parcels required for securing the sites, and the need for sufficient water resources for cooling.

If the siting of a 0.57 MW solar farm causes this much trouble, you can forget about solving the energy puzzle with solar alone. It has a role to play, but until the technology clears many more hurdles, nuclear power remains the most promising option we have.