When you think about it, Mya Mosley couldn’t help but become a basketball player.

Mosley, a senior at Wachusett Regional, is averaging 13.2 points per game for the 8-1 Mountaineers [as of Friday, Jan. 22]. To say that there is a strong basketball influence in her gene pool is kind of like saying the Porsche 911 is a fast car [Editor’s note: Um, KP, maybe a car not from the ‘80s; I’d have gone Bugatti Veyron or McLaren F1, myself. But, anyway — carry on]. 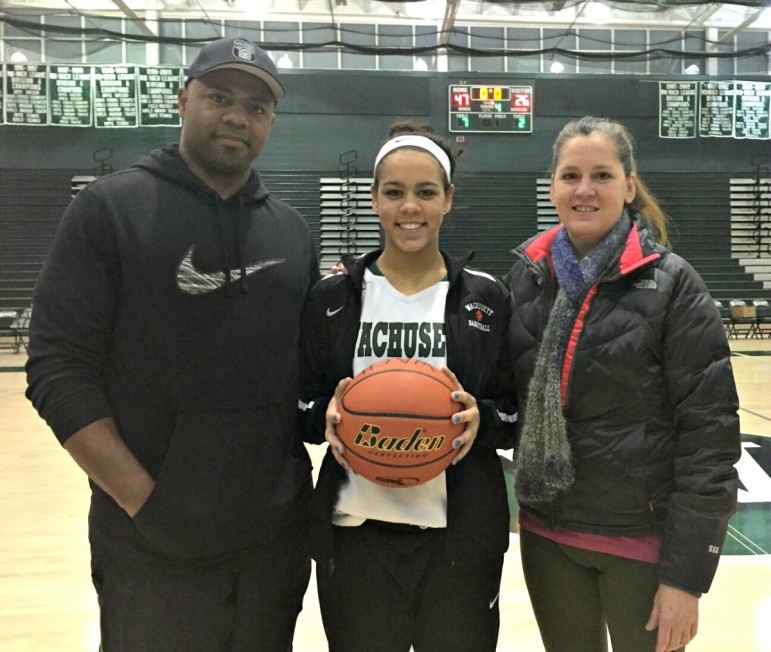 Wachusett basketball star Mya Mosley stands with her parents, Will Mosley of Worcester and Donna Gillogly, who captained the team at Worcester State.

Mosley’s father, Will, a Worcester firefighter (and former police officer), was a standout player at Burncoat High who went on to play briefly at Division 2 Assumption College. Will still competes in adult leagues throughout the city and works with many Worcester-area athletes as a personal trainer.

Mosley’s mother, Donna Gillogly, excelled in basketball in both high school and college.

Gillogly then coached basketball at Becker and field hockey at Groton-Dunstable Regional (for 11 years) as well as softball at South High and tennis at Burncoat. Gillogly, who is also a respected field hockey official, is a physical education teacher at Burncoat.

“In the third or fourth grade I could just tell, there was something special about her.

“Mya is just an athlete; it all comes very natural to her,” said Gillogly, who, as a former coach, knows a little something about assessing an athlete’s abilities. “Mya can throw a football, she played softball – she played everything. Mya would decide to try a sport and she would pick it up right away. It just so happened that basketball became her go-to sport.”

Mosley, who lives in Holden with her mother, has four brothers and sisters. Her older sister, 20-year-old Dezarae, is a theater enthusiast, but brother Marcus, 13, and sister Maleia, 12, are basketball players, too. She expects her youngest brother, Ty, 6, to take up the sport when he gets older.

Mosley said she’s had a basketball in her hands as long as she can remember.

“I don’t remember when I started playing, but I’ve always played,” the 5-foot, 10-inch guard said. “I remember playing when I was very little. Because both of my parents played, they got me into it when I was really young. I know I played at Girls Inc., and at camps at Worcester State, stuff like that.”

While the 17-year-old may not remember her first basketball moment, she’s made a lot of memories since, first playing AAU basketball for coach Hank DeSantis and the Central Mass. Huskies, and, lately, with Jim “Coach Ox” Oxford and the Wachusett varsity.

Mosley made the squad as a freshman and last winter helped the Mountaineers win 21 games and capture the Central Mass. Division 1 championship by averaging 13 points, 9 rebounds and 6 assists a game. In the tournament final last March Mosley scored a career-high 22 points. A few days later she scored 17 in a state tournament semifinal against Springfield Central. She is a two-time league all-star.

“Mya’s great; she’s a tremendous athlete,” Oxford said of Mosley, who has also played volleyball and run track while at Wachusett. “She’s at her best when she’s running the floor and getting out in space. There are not too many players that can guard her in open space because she’s so fast, quick and athletic.”

Mosley said she likes all aspects of basketball.

“I love winning; that’s always fun,” she said quickly when asked about her favorite part of the game. After taking a moment to reflect on the question Mosley added: “Basketball, for me, is kind of an escape from everything else. Sometimes it gets stressful, but it’s mostly fun.”

Mosley also admitted that, like a lot of athletes, she despises losing.

“I hate losing more than I like winning, that’s for sure,” she said, but added she is not always grumpy after a loss. “It depends on the loss.”

“I was always quicker than everyone else,” she said. “My dad saw my potential at that point and he got me into working out. It was kind of my dad who really pushed me – we worked on fundamentals together a lot – and then I made the varsity my freshman year at Wachusett. That was big.”

Mosley’s play at Wachusett and with the Huskies has generated some recruiting interest from several Division 2 schools, including Catawba College (Salisbury, N.C.), University of Charleston (Charleston, W.V.) and Belmont Abbey College (Belmont, N.C.). Locally, Mosley is being recruited by the University of New Haven, Emmanuel College and UMass-Boston.

“I’ve narrowed it down to those three,” Mosley said of New Haven, Emmanuel and UMass-Boston. “I don’t know, though, we’ll see if anyone else becomes interested during the season.”

Mosley said that if she had to pick, her top choice right now would be Emmanuel, which has a top-flight athletic training program – she wants to be an athletic trainer when her basketball career is over – and is a member of the Colleges of the Fenway program.

The Colleges of the Fenway program allows undergraduates of the member schools – Emmanuel, MCPHS University, Simmons College, Wentworth Institute of Technology, Wheelock College and Massachusetts College of Art and Design – to take two courses per semester at any of the other five member schools.

“I really like [the] idea that I can go to Emmanuel and take courses at other schools in Boston, too,” Mosley said. “Plus Emmanuel has a very good athletic training program and I want to get into that.”

Mosley said it was chronic knee pain that got her interested in athletic training.

“I’ve always seemed to have knee pain along with some other aches and pains, too,” Mosley said. “Plus, our two trainers at Wachusett, Kevin Morrissey and John Schaper, they’re great guys and they always seem to be having a good time. They make it seem like it would be a fun profession.”

But, before college and athletic training and the Colleges of the Fenway program, there are championships to be won.

The Inter-High has announced its All-Stars for the fall 2015 sports season. They are:

The undefeated Nashoba Regional football team earned a pair of All-Massachusetts Football Team selections in Jamie Tucker, who was named coach of the year, and senior Mike Curtin, who was named to the Second Team defense.

Tucker led Nashoba to a 14-0 season and the school’s first-ever state championship. A perennial Central Massachusetts power, this was Nashoba’s first championship as part of the revamped playoff system that has been crowning true state champions since 2013.

Curtin, a 6-2, 260-pound defensive lineman for the Chieftains – he was also a starter on Nashoba’s offensive line – made 49 tackles this season, eight coming behind the line of scrimmage.