Friendships shouldn’t begin and end in tragedy, but for Michael Ricardi and college buddy James Gahan IV, indeed, there was precious time to bond between the fiery bookends of their relationship.

A recently minted freshman at Nichols College in Dudley, Ricardi had walked into the dining hall on a clear, warm Tuesday morning when he was stopped by another student who recognized the T-shirt Ricardi was wearing. 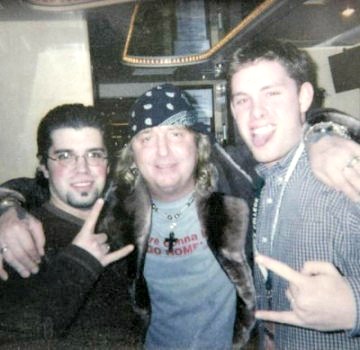 It was Poison’s “Power to the People” tour T-shirt from 2000 that grabbed Gahan, stopped Ricardi in his tracks and led to an amicable breakfast between the freshmen who discussed their love of hair metal bands from the 1980s.

“Ironically enough, the friendship that would experience tragedy, began on tragedy,” Ricardi said.

“He clung on to that,” Ricardi said about Gahan noticing Ricardi’s Poison T-shirt. “He introduced himself based solely on that shirt. We started talking music for 10 or 15 minutes. And then 9/11 struck. Talk about a weird way to start a friendship that would ironically end in tragedy.”

Gahan and Ricardi developed a friendship that evolved into a Nichols College radio show — Jim and Mikey’s Power Hour — on which they paid tribute to their favorite rock bands and interviewed band members slated to perform local shows.

Fast forward to February, second semester of sophomore year, and the duo is still going strong. So strong that having been granted passes from the frontman of a band they were planning to interview, they took their show on the road.

“We both hesitated for a second because the fire went off so evenly and proportionately. We thought it was part of the show. Before we knew it, it was a mad rush to get out the back,” Ricardi said.

It was Feb. 20, 2003. The frontman was Jack Russell of the band Great White, and Ricardi and Gahan had trekked to Warwick, Rhode Island, to see them play The Station nightclub.

The abrupt and constricting inferno that swallowed the 1,600-square-foot structure in less than six minutes was caused by pyrotechnics that ignited sound-insulation foam surrounding the stage.

When the fire set off, Gahan and Ricardi began retreating toward the back of the club. It was mayhem, Ricardi recounted. Black smoke suffocated everyone in attendance. After being thrown to the ground and trampled, Ricardi got up and made his way to a nearby window.

Ricardi flung himself outside and then waited as close to the door as he could for his friend. Jim was right behind him, Ricardi thought, but in the hysteria they lost each other.

Gahan was one of 100 people who died in the Station Nightclub fire. Ricardi was one of 362 who escaped, most of them injured.

“It wasn’t until the next day that things really sunk in for me. When Jim wasn’t identified at the hospital, I finally understood what happened,” Ricardi said.

Last summer, Ricardi, 32, released his self-published memoir “Just a Thought Away: A True Story of Friendship, Tragedy, and the Will to Carry On, as Told by a Station Nightclub Survivor.” The book details his friendship with Gahan and how they ended up in Warwick that tragic night.

In commemoration of the 13th anniversary of the fire, and to help keep alive the memory of his friend, Ricardi, who grew up on Grafton Hill and graduated in 2001 from St. John’s, has been speaking out to tell Gahan’s story and promote his book.

“There was a local push last summer when the book came out. Within the last month or so, with the anniversary coming up, I figured that was a good time to start it. It’s going to be on people’s minds. And I figured it would make sense to make another push,” Ricardi said. 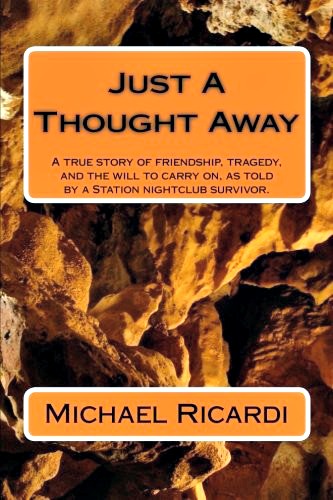 On Thursday night, Feb. 18, Ricardi, a supervisor with Westwood-based software and technology firm Meditech, spoke to a full house at his college alma mater to tell current students about his experience and to share stories about his time at the school.

“I try to convey to people to treasure friendships when you know you have a good one,” Ricardi said. “One of the things I really want to drive home is that Jim and I weren’t Facebook friends. This friendship grew very naturally and organically. Take a step back and appreciate life. You never know when it’s going to change in an instant.

“At the end of the day, follow your dreams, too. That’s why Jim and I were even there that night.

“I tried to expand on the values that these students will learn later on in life — friendship, family, following your dreams. And secondly, which I was humbly reminded about, this happened when these students were 6 years old. It’s really bringing them back to a time when there was no social media, no smart devices. It was a much different time in our lives,” he added.

Earlier last week, Ricardi discussed his book on WAAF-FM 107.3, on the Hillman in the Morning show. And on Wednesday, former WWE superstar wrestler Chris Jericho had Ricardi on his podcast to discuss the book.

“Jericho is a huge music fan. He had a similar experience. I figured reaching out to him would be appropriate. I had no idea that he would want me to come on to his podcast, travel to Florida, and talk about it with him,” Ricardi said.

Ricardi said he had no solid plans for future book promotion, but said he has the full support of Gahan’s parents, who hope their son’s story carries on.

“They’ve always supported me. Beyond my own parents, Jim’s parents have been my biggest supporters,” Ricardi said.

In front of the Nichols crowd Thursday, Ricardi stressed how much things have changed and how terrifying it must have been for his family and friends waiting for word that he was OK.

“I’ve always compared it to the Boston Marathon bombing,” Ricardi said. “Within minutes, anyone that you knew that may have been impacted by it, were tweeting or were Facebook posting. You knew they were OK. We didn’t have that in 2003. You’re sitting there waiting by the phone waiting for the inevitable news.

“There’s certain times in your life that you remember where you were or what you were doing when they happened. This is something that I’ll never forget for the rest of my life.”

“Just a Thought Away: A True Story of Friendship, Tragedy, and the Will to Carry On, as Told by a Station Nightclub Survivor” is available on Amazon.com.