Their writers have the same desire to experience a place, and oftentimes ask the same questions as we do looking back today. In particular, there’s been a renewed interest in studying the role of travel as part of the 20th-century African-American experience. While Worcester was not a major travel destination, there were many people moving through the city by both car and rail.

There were no guarantees for travelers of color in the 1940s.

Prior to passage of the federal Civil Rights Act of 1964 local laws or regulations could segregate service. Even in areas without legally defined segregation — as in much of the northern United States — local practice and racial bias could be used as reasons to deny accommodation. 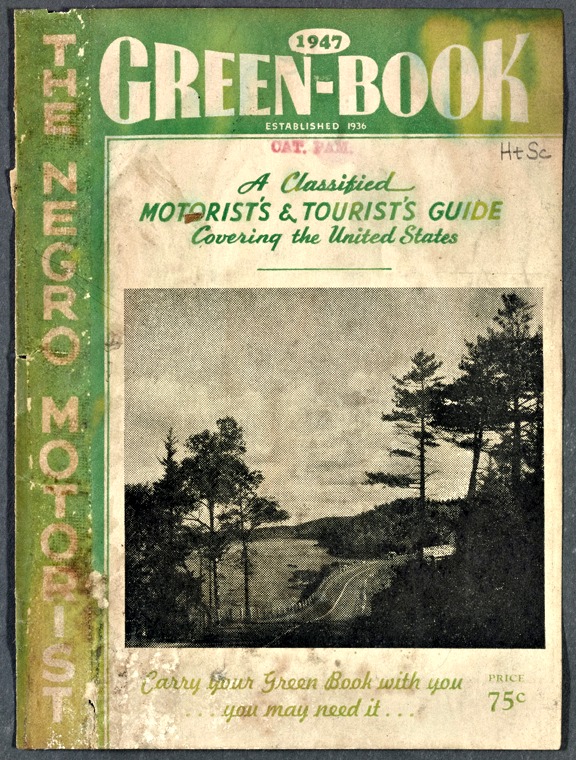 Cover of the 1947 edition of the Negro Motorist Green Book. “Carry your Green Book with you…you may need it…”

Imagine arriving in an unfamiliar city not knowing if the restaurant around the corner would serve you, or if the gas station would fill your car. This could make travel extremely stressful, difficult or even dangerous.

In the early 20th century, guide books appeared to aid travelers confronting race in unfamiliar places. One of the most widely read travel guides from the early to mid-20th century was The Green Book. Published by Victor Hugo Green beginning in 1936, the guide grew quickly as a resource for the black middle class hitting the road. 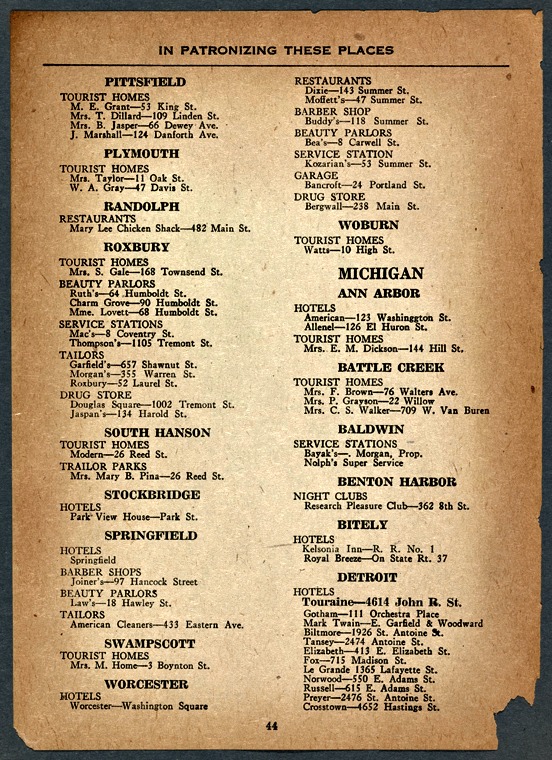 A sample page from the 1947 Green Book, with business listings for Worcester

The Schomburg Center for Research in Black Culture at the New York Public Library has an extensive collection of guides it digitized for the Internet. The Green Book started with just listings for metropolitan New York City, eventually adding listings from all over the United States — including Worcester.

[Map of the location of businesses listed in the Green Book in 1947. ]

Entries for Worcester appeared from 1947 to 1962. Like social networks or review sites today, the Green Book relied on its readers to submit businesses. The early years of the guide were the most comprehensive, with just a single hotel included by the 1959 edition.

Looking back at the entries from 1947 shows not only the types of services that travelers could expect visiting Worcester, but also the outlines of a neighborhood stretching from Lincoln to Washington squares that would largely disappear and be redeveloped in urban renewal beginning in the 1950s. 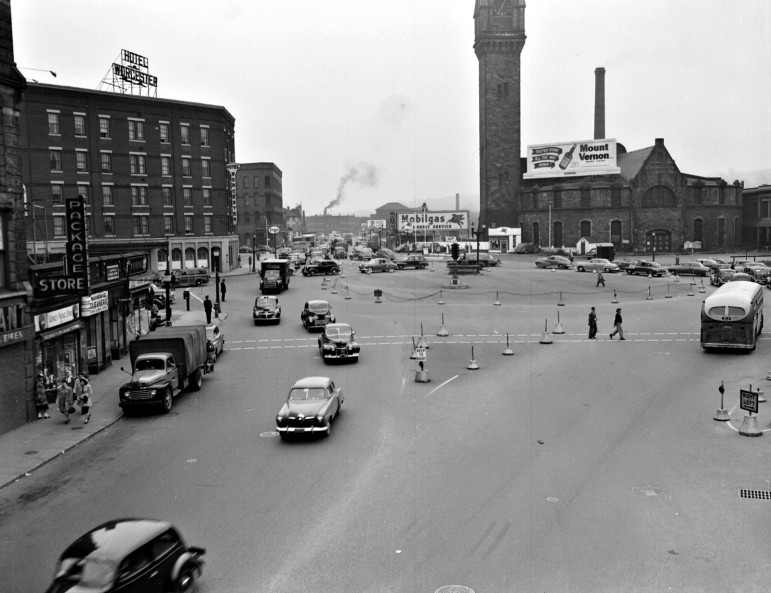 Looking east, in April 1950, from Foster Street (which once connected with Washington Square under the railroad bridge by St Vincent’s) toward Shrewsbury Street. The old Union Station is directly in front, while the new station is off-frame to the right.

The longest-running listing for the city was the Hotel Worcester located opposite Union Station in Washington Square between Summer and Mulberry streets.

Hotel Worcester was among the Green Book-approved businesses in the city.

Opened in 1928 by Louis Chase, the hotel was focused on affordable, first-class accommodations marketed under the slogan, “The Hotel that is Different.” Unlike other downtown, full-service hotels such as the Bancroft, the Hotel Worcester did not include any “unnecessary appurtenances.” As an early advertisement reads, it “boasts of no ballroom, no diningrooms [sic], no grills — in short nothing more than a comfortable cozy lobby and 65 handsomely appointed rooms.”

In 1942, the hotel was purchased and renovated by hotelier J.P. DelMonte. Born in Zaragoza, Spain, DelMonte immigrated penniless to the United States when he was 17 years old. He worked as a dishwasher in New York until he moved to Boston in 1912. 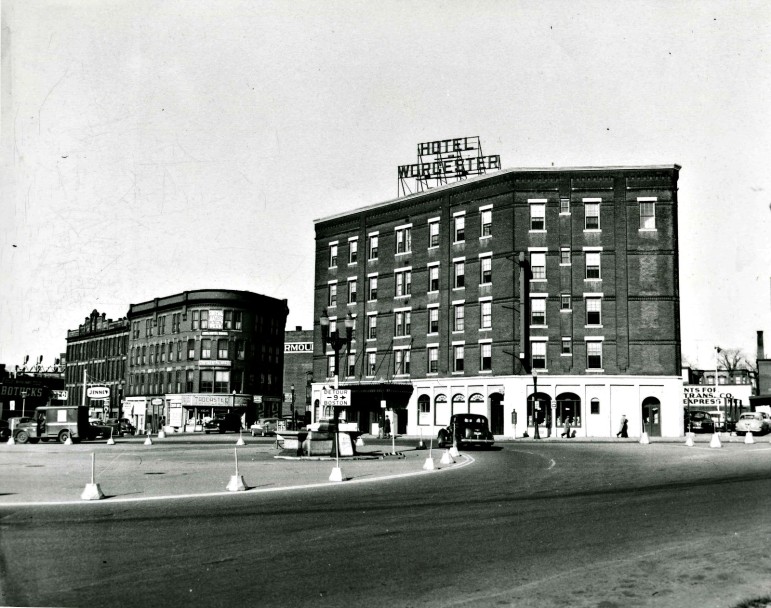 He saved enough money to purchase the Hotel Buckminster near Fenway Park. After nearly 20 years in Boston, he sold his interest in the Buckminster to retire. A few months later, however, he came out of retirement to purchase and renovate the Hotel Worcester.

It was under DelMonte’s ownership that the hotel first appeared in the Green Book. In 1952, he sold the hotel and retired a second time. DelMonte lived out the archetypal American dream. He arrived as a poor immigrant, worked his way from dishwasher to hotel owner, and retired to Florida.

The hotel, along with 33 other buildings in the Summer Street neighborhood, was demolished in 1956 to expand the traffic rotary in Washington Square, which was long a source of congestion and complaints. The state spent $1.5 million to purchase and raze the structures in order for the rotary to accommodate four travel lanes.

This was one of the first of many projects that would dramatically change the residential and commercial configuration of downtown Worcester.

Washington Square, from the front of Union Station, with the former Hotel Worcester site at left.

The size of the rotary, however, was recently returned to its original configuration of two lanes. This has opened up a portion of the old hotel parcel for redevelopment. One of the projects underway is to bring a hotel back to Washington Square.

At times like this, there is a tendency to resort to the cliché, “everything old is new again.” Looking at Washington Square and its iterations of redevelopment, it is hard to argue with that saying applied to Worcester.

Need a little more history in your life? Check out these entries from David:

Worcestory Lesson: A ‘diabolical outrage’ in 1850