[Editor’s note: This was originally published on Feb. 14. Since then, according to band director Johnetta Smith, the band has raised $3,285 on its GoFundMe.com page and nearly $35,000 in donations from foundations, corporations and individuals. The group needs to raise roughly $9,000 to complete the total goal of $46,887.]

South High Community School Band was invited to perform in Philadelphia this spring as part of a commemoration of the 240th anniversary of the Declaration of Independence.

Made up of 87 students and led by teacher Johnetta Smith, the group would perform in Philadelphia on Saturday, May 21, then travel to Annapolis, Maryland, to perform alongside the U.S. Naval Academy ensemble May 22.

While at Annapolis, the band will not only perform but receive a clinic from a Navy conductor.

“They’re representing Massachusetts at this event, and it doesn’t get any better than that,” School Committee member John Monfredo said.

This year’s trip to celebrate America’s independence will be the band’s second in the past four years. The group represented Massachusetts in Washington, D.C., in 2012 when it marched in the National Independence Day Parade as part of July Fourth celebrations.

“They’re a very talented group. Obviously the players change, but through the direction of Johnetta Smith, they’ve continued to excel in something that’s very difficult to do,” Monfredo said.

“The kids are very excited,” the band director, Smith, said. “What I find amazing is how much the parents appreciate it. They want this opportunity for the students. The parents have terrific involvement.”

She added, “We do have students that have never been out of Massachusetts. So this will be a real experience for them.”

Although the invitation to travel to Philly is prestigious, it comes with a hefty price tag. For travel, hotel accommodations, and meals for the band members, the school figures it must raise $46,887. As of Friday afternoon, Feb. 12, it had collected about $16,500.

For a school where most of the students come from low-income families, according to administrators, raising those funds could be daunting.

“It’s very difficult to raise that kind of money, but the kids are doing everything they can,” Principal Maureen F. Binienda said.

“They’re volunteering their time and doing work around the city to raise money to represent Massachusetts. We’re entirely proud of their efforts,” she said.

Each student must pay $100 toward the trip and has to raise that money on their own. The students have sold candles, held bake sales and put together a March calendar raffle. The students will also raise money by cleaning up Park Avenue after the St. Patrick’s Day parade. 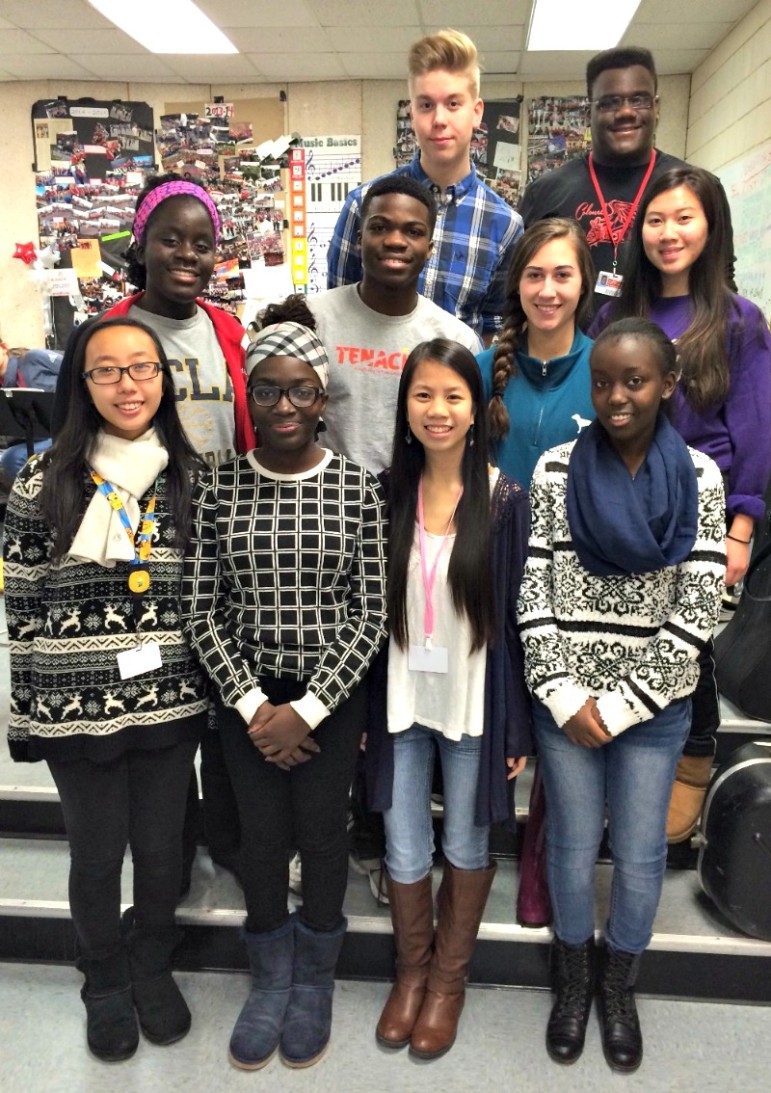 Smith and the band’s officers have launched a GoFundMe campaign to complement its broader fundraising efforts. As of midday Saturday, Feb. 13, the band had raised $1,905 of the campaign’s $40,000 goal from 33 donors.

“When I see the things the kids do for the community, it’s amazing. They put so much time in, and never complain about being tired. They put their hearts and souls into it,” Smith said.

“I think we forget to look at the importance and time and effort, and of course, the talent that goes into playing an instrument. They [South High Band members] are simply a model for other students, not only the inner-city students, but any students to exemplify,” Monfredo said.

This article was originally published in the Feb. 14, 2016 edition of the Sun.