Warning: unlink(/tmp/blog-xdKpCK.tmp): No such file or directory in /home/customer/www/worcester.ma/public_html/wp-admin/includes/class-wp-filesystem-ftpext.php on line 116

Warning: unlink(/tmp/full-width-image-HWWLch.tmp): No such file or directory in /home/customer/www/worcester.ma/public_html/wp-admin/includes/class-wp-filesystem-ftpext.php on line 116

Warning: unlink(/tmp/full-width-image-PypH6L.tmp): No such file or directory in /home/customer/www/worcester.ma/public_html/wp-admin/includes/class-wp-filesystem-ftpext.php on line 116

Warning: unlink(/tmp/full-width-image-5NkMeh.tmp): No such file or directory in /home/customer/www/worcester.ma/public_html/wp-admin/includes/class-wp-filesystem-ftpext.php on line 116

Warning: unlink(/tmp/top-stories-YZZovO.tmp): No such file or directory in /home/customer/www/worcester.ma/public_html/wp-admin/includes/class-wp-filesystem-ftpext.php on line 116

Warning: unlink(/tmp/legacy-three-column-ERJJPy.tmp): No such file or directory in /home/customer/www/worcester.ma/public_html/wp-admin/includes/class-wp-filesystem-ftpext.php on line 116

“He was interested in all that tended toward the advancement of humanity and was catholic in all his sympathies. He was the champion of the oppressed, the friend of the needy, and the helper of those in distress. His last public utterance was in one of the public schools of this city, and of the cause of universal free education he has ever been a devoted advocate…”

So proclaimed the Worcester City Council following the death of one of the city’s, and the nation’s, leading figures.

“To Clark University, he has contributed largely of his time and wisdom,” they wrote. “He filled in fullest measure the widest sphere of opportunity … he was the incarnation of Massachusetts.”

He is held in esteem well beyond Worcester.

History records that at a time of rising xenophobia, this man opposed laws to bar immigrants on the basis of race.

In an era of opulence and inequality, he led the fight to enact antitrust legislation. He fought for the rights of African-Americans and Native Americans, favored women’s suffrage 34 years before passage of the Nineteenth Amendment, and opposed U.S. military action in the Philippines and Panama.

And in an election year which saw one of the nation’s major political parties locked in a seemingly insoluble fight for a presidential nomination, it was this man who presided over a protracted convention that settled upon an accomplished and popular candidate.

Students of history may already have guessed his name: George Frisbie Hoar. 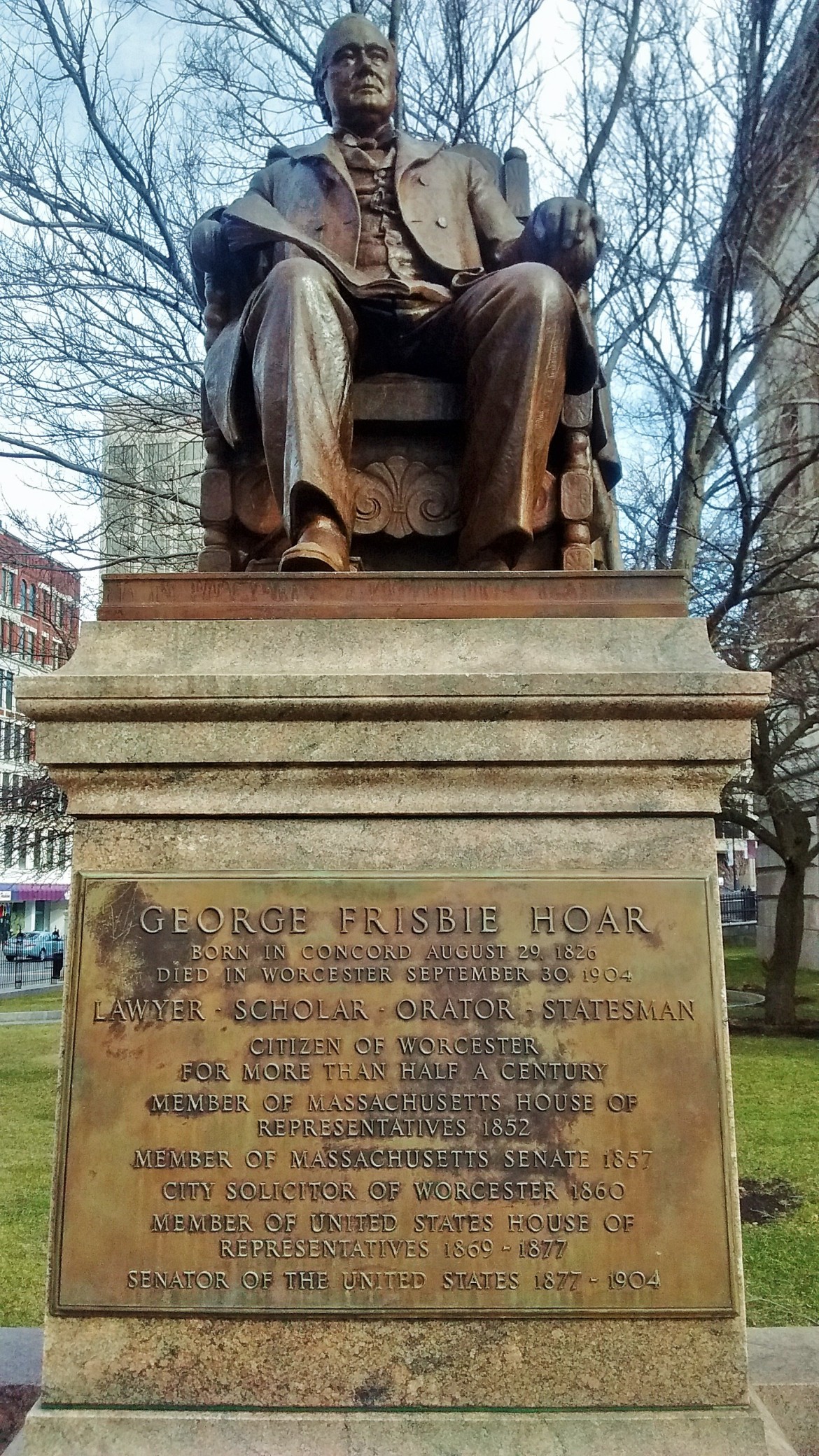 The statue of George Frisbie Hoar next to City Hall.

Born in Concord, Massachusetts, Hoar was a grandson of Roger Sherman, a signer of the Declaration of Independence and U.S. Constitution. He graduated from Harvard University, studied at Harvard Law School, settled in Worcester and practiced law for many years.

Having enjoyed the blessings of education, it is little wonder that Hoar was such a passionate advocate for schools, public and private alike.

Having been steeped in the Constitution, the law and family tradition, it is no surprise that Hoar was among those in Congress who opposed the 1882 Chinese Exclusion Act. By 1904, when a series of laws barring Chinese immigration were extended indefinitely by a Senate vote of 76-1, it was Hoar who cast the only dissenting vote.

During his 35 years in Washington, Hoar was a tireless advocate for the rights of all. A proud Republican, he was never afraid to break with his party when principle demanded.

Hoar was among the authors of the Sherman Anti-Trust Act, and stated during floor debate in the Senate that his intent was not to deny success to the man of superior skill and intelligence, but to oppose “… the use of means which made it impossible for other persons to engage in fair competition …”

Hoar was fearless in opposing President William McKinley over the U.S. war in the Philippines, stating, “Your practical statesmanship has succeeded in converting a people who three years ago were ready to kiss the hem of the garment of the American … into sullen and irreconcilable enemies, possessed of a hatred which centuries can not eradicate.”

Hoar helped found what became Worcester Polytechnic Institute, and was a longtime member of the American Antiquarian Society, including three years as its president. 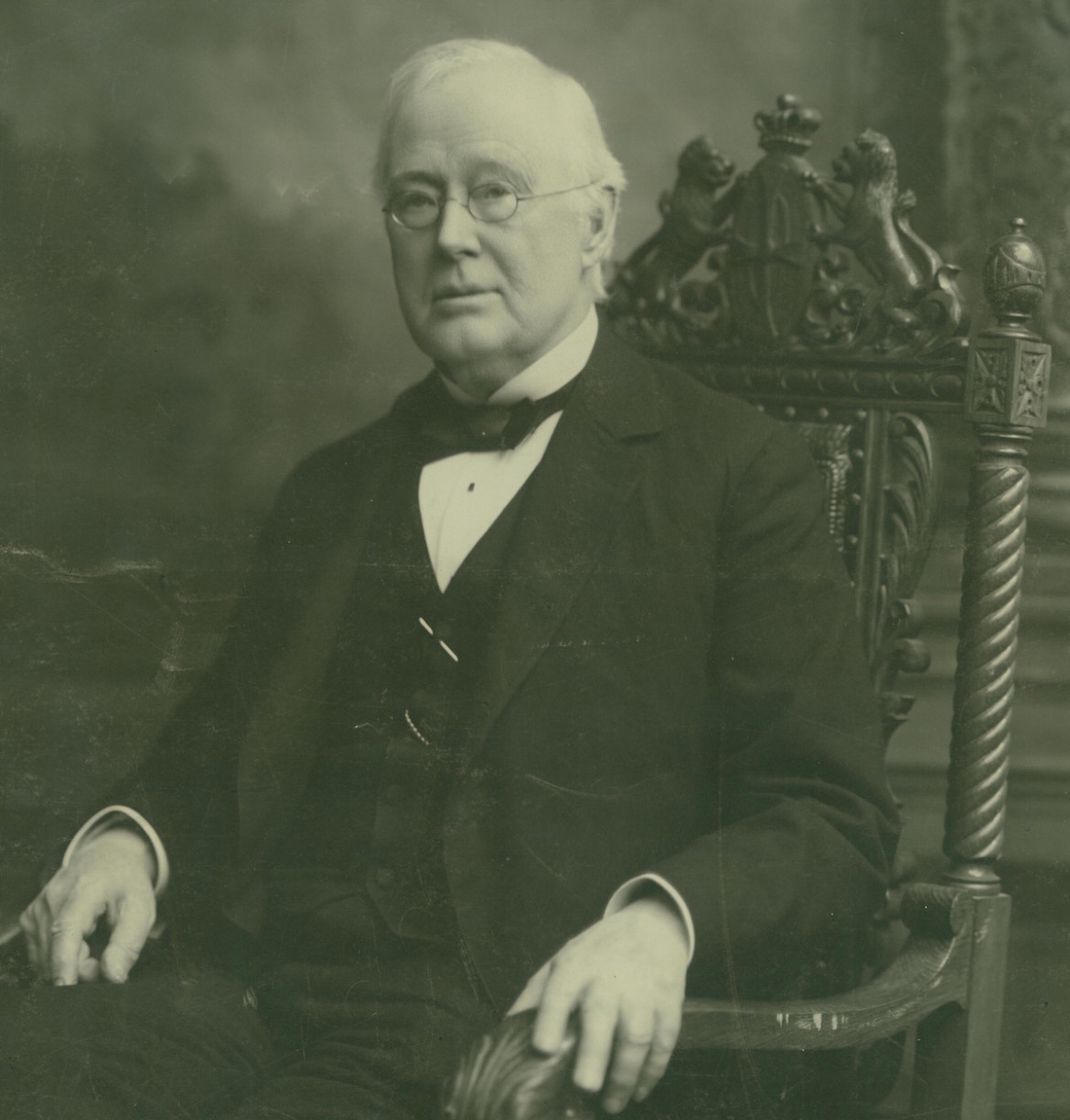 From the collections of the Worcester Historical Museum

And no account of Hoar’s life – particularly one offered in a presidential year – can omit his role as chairman of the 1880 Republican National Convention, which featured a protracted struggle among Ulysses S. Grant, James G. Blaine and John Sherman – and produced nominee James A. Garfield.

Hoar didn’t start the Garfield bandwagon, but without him, the nomination might not have happened. On the 34th ballot, 16 Wisconsin delegates announced they would switch their allegiance to Garfield.

The future president, who didn’t seek the White House, moved to object, but was ruled out of order by Hoar. Two ballots later, Garfield was the nominee.

A century ago, all of Worcester knew and respected George Frisbie Hoar. Following his death in September 1904, the public erected a statute of Hoar that stands to this day next to City Hall.

It being an election year, you may be tempted to play party politics with Hoar, arguing he would back one or another of the candidates. Resist that temptation. Were he alive today, Hoar would almost certainly recoil at the candidates, Democrats and Republicans alike, that we have produced for 2016.

Instead, visit his statue and read about Hoar’s life. You are sure to learn something about history, the law and the nobler uses to which politics can be put in America.

Buffeted by angry birds of 2016

A Supreme consideration, the Constitution

Sinacola’s most-viewed: Worcester’s search for itself and I come not to bury Trump