If not for a factory fire, it is possible that instead of Hondas or Harley-Davidsons today we might all be riding motorcycles made by Royal Motor Works right here in Worcester. Introduced in 1909, the Pioneer was, according to Bonhams, “one of the finest motorcycles produced in this country.” 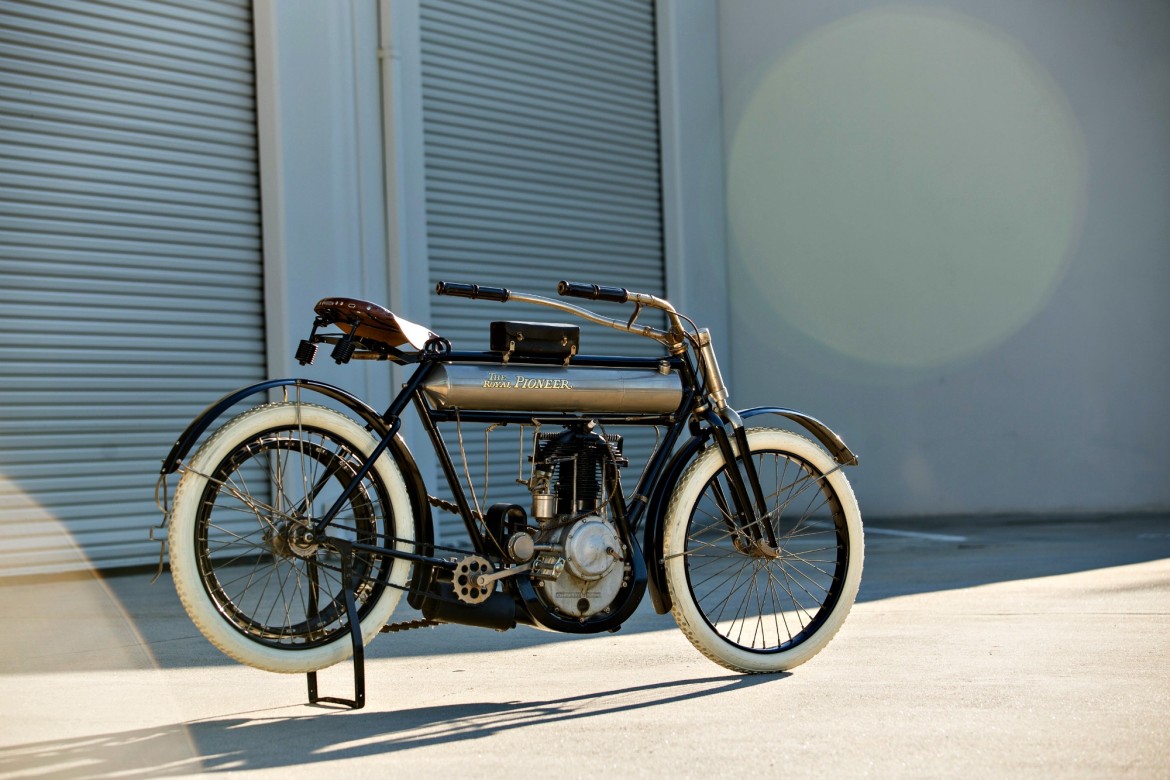 While there are some serious folks who ride year-round, March brings back motorcycle season for the rest of us. It is the beginning of outdoor swap meets, long rides and late nights in the garage. This tradition stretches back to the very beginnings of motorcycle culture here in Worcester.

On Patriots Day in 1909, men and women rode to Worcester from all over New York state and New England to celebrate the new season. It was no small feat in the days before paved roads and interstate highways. As many as 500 riders left their homes for the run, but only about 350 arrived. This number, however, tripled the expectations of the planners.

“Rarely has so much gasoline been smelled in one day in Massachusetts. It was the old familiar odor in all the old familiar places. Every gust of wind bore a fragrance that made drivers of machines of every description snort with delight.” – Motorcycle Illustrated May 1, 1909

Bikes were judged, stories exchanged, and dinner was served on Main Street for participants as they arrived. The event even brought together the rival Commonwealth and Massachusetts motorcycle clubs. The year 1909 turned out to be a high-water mark for motorcyclists in the city.

Riders gather in the yard of Lincoln Holland’s Bike Shop on Allen Court, located next to the present day offices of Worcester Sun.

The Royal Motor Works was founded in New York in 1901 as a partnership between Swedish-born bike designer Emil Hafelfinger and Worcester industrialist Charles Persons. They manufactured accessories and built some of their first motorcycles based on European designs at a factory in Chicopee Falls in Western Mass.

In 1907, the company moved to Worcester and began preparing its most influential model, the Pioneer.

Eschewing commodity parts, Royal Motor Works designed the Pioneer from the ground up to be the best bike of the day. In order to achieve the highest level of quality, the company designed a proprietary motor and used heavy-duty automobile bearings. The Pioneer introduced multiple innovations, including the first motorcycle with a double-action spring fork for a lower and smoother ride.

All of these cutting-edge parts and materials were manufactured in Worcester, an extreme rarity in motorcycle manufacturing at that time and an indication of the city’s industrial might. From an article posted on the Bonhams auction website:

“The Royal Motor Works was one of the very few manufacturers to do all of the machining, finishing and assembly of its own motorcycles. They were made entirely in Worcester, with machining of the engine parts done at Water and Ledge streets by McMahon and Co. … The McMahon company later became known for its manufacture of friction clutches.”

Collector Bruce Linsday whose 1909 Royal Pioneer was on display at the National Motorcycle Museum in Iowa, describes the Pioneer as a “first class bike that is actually really well built.” Vintage motorcycles are mechanical in a way that modern bikes can never be. The Pioneer had four grip controls: fuel, air, magneto spark and a starter/stall valve. A rider had to be prepared to manipulate all four. 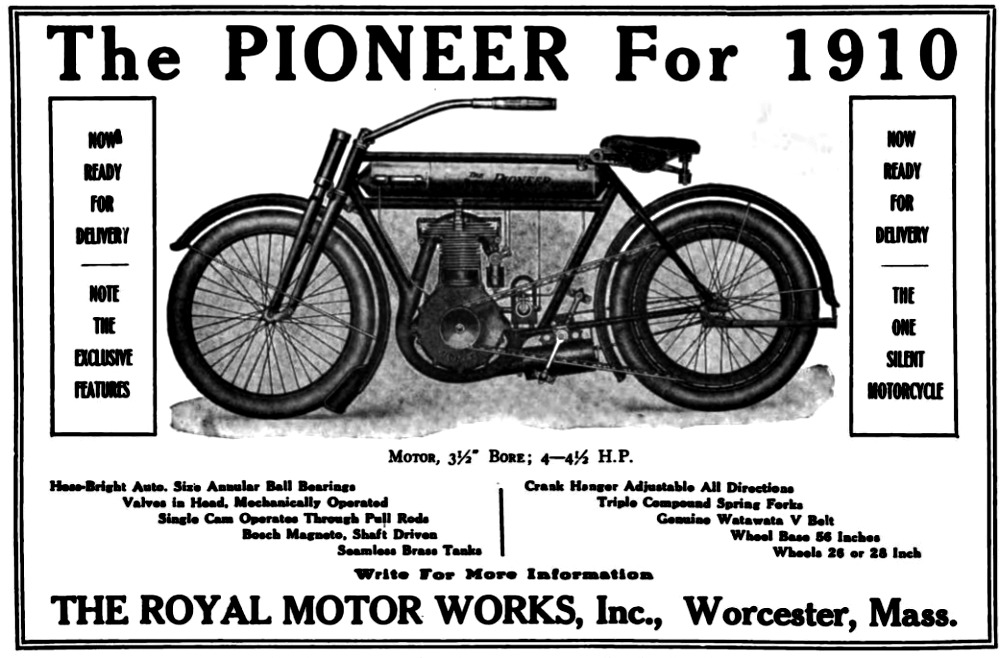 Advertisements heralded the Pioneer as “The One Silent Motorcycle.” They utilized a hollow frame to bring exhaust from the motor to a muffler mounted in front of the rear wheel. The design included an expansion chamber to reduce back pressure and enhance engine performance.

The 500cc single-cylinder motor featured  a modified Brown & Barlow carburetor, heavy duty flywheels and an innovative hemispherical, or domed head. Readers may be most familiar with the Hemi branding from modern Chrysler cars and trucks. This design allows the valves to be placed at 90 degrees to the piston and the spark plug at the top of the chamber to maximize combustion and performance.

The result was a lightweight motorcycle that could achieve speed of 50 to 60 miles per hour. 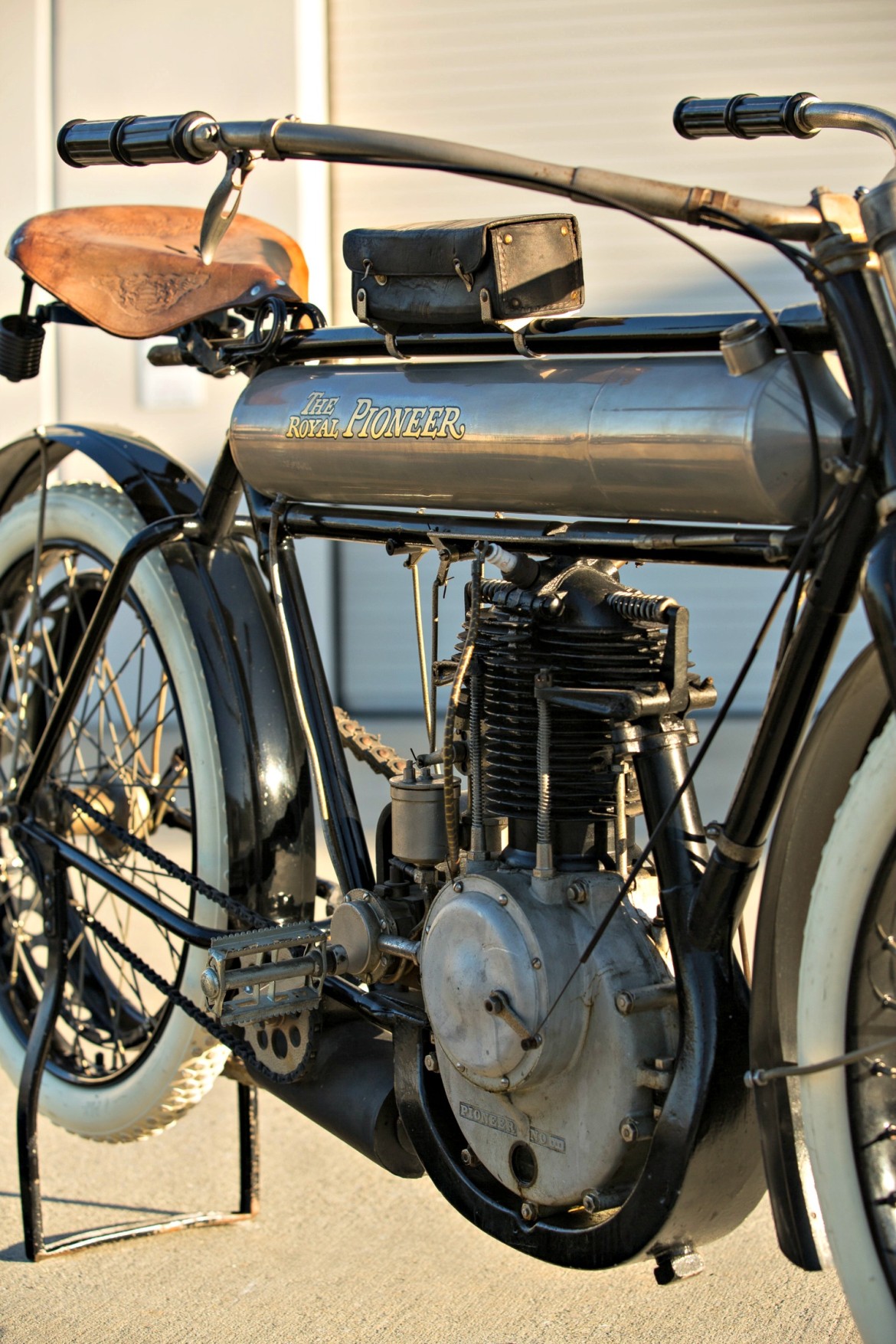 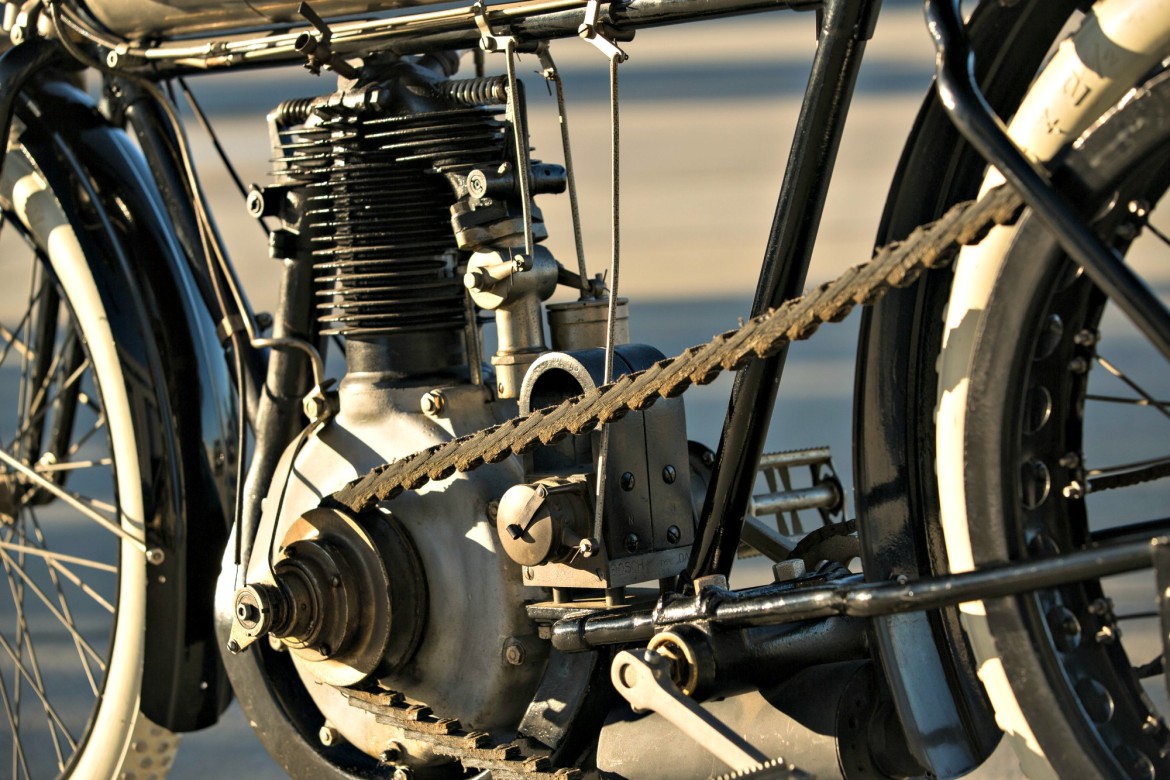 The Pioneer’s clutch design was ahead of its time.

Direct-drive motorcycles lack gears to downshift, and without a clutch to partially disengage the drive, a hill can stall an engine and force the rider to pedal or push. This was especially problematic in turn-of-the-century Worcester with its fair share of steep hills and unpaved roads. The inclusion of an engine clutch was one of the Pioneer’s most important design elements.

After Royal closed, its chief engineer William McGrath moved to Eclipse Machine Co. in New York, which popularized the clutch design into the 1920s.

For a 1909 Motorcycle Illustrated feature, the company demonstrated how the Pioneer could climb Leicester Hill and then Dead Horse Hill (Stafford Street) over and over again without the need for pedal assist. As the magazine wrote, “this proved more meat for the Pioneer,” and the demonstration “tells a tale of its own of speed on the level.” 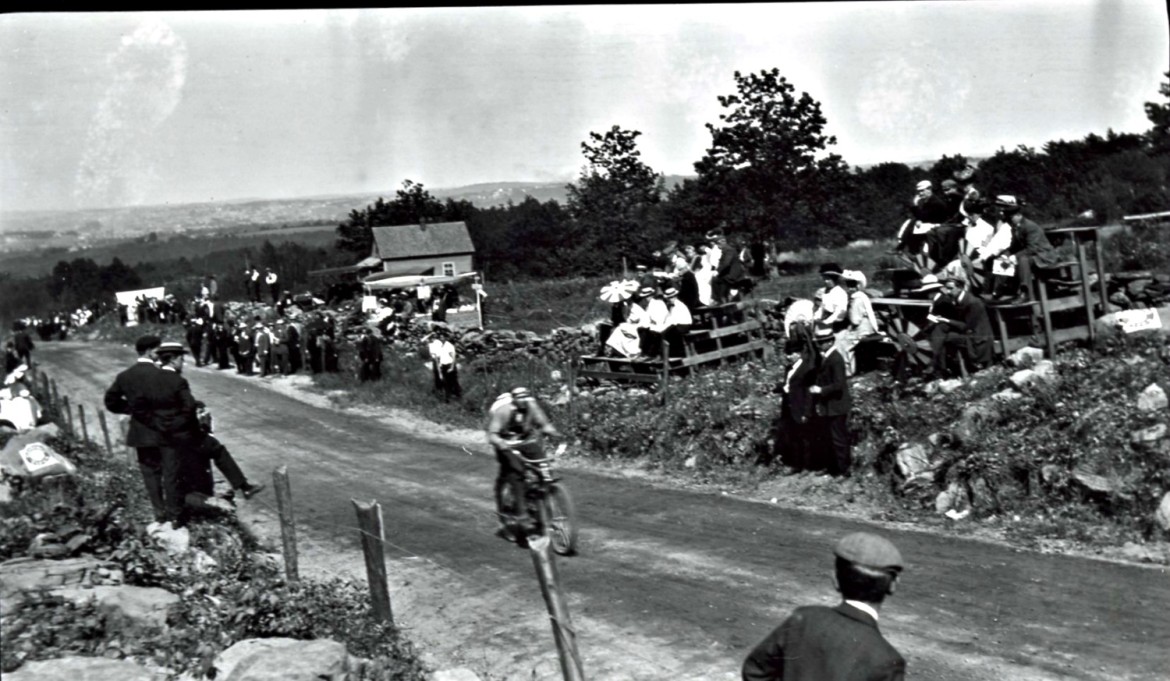 This combination of features and breakthroughs — while driving its price much higher than its competitors; $265 to $175 in 1909 — makes the Pioneer one of the most significant designs in motorcycling history. Even the late Steve McQueen, “King of Cool” and noted classic motorcycle collector, couldn’t resist the allure of this trend-setting machine.

While the profile of these bikes has been raised since one was featured on History Channel’s American Pickers, they are still rare and relatively unknown. A fire destroyed the Royal factory in December 1909 and ended production after only approximately 500 bikes. Only four are known to have survived, with one recently selling at auction for $115,000.

The early 20th century was the height of small motorcycle manufacturers in the United States. Springfield and the much larger Indian Motocycle Company most often come to mind when thinking about its growth in New England, but there was an entire industry of smaller inventors and manufacturers. Even here in Worcester, the Coes Wrench Co. built and marketed specialty motorcycle tools. 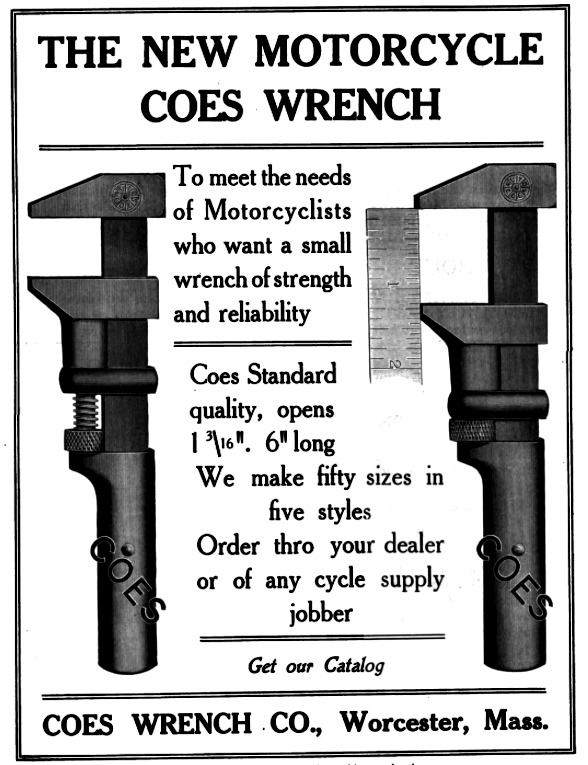 The economic realities, however, were not kind to the motorcycle industry and many of the companies folded with the growth in popularity of the automobile. Royal’s higher level of commitment to design and build quality set it apart from its competitors. It’s possible that its innovation may have been enough for the company to compete and survive.

One thought on “Worcestory Lesson: Royal Pioneer and the city’s place in motorcycle history”