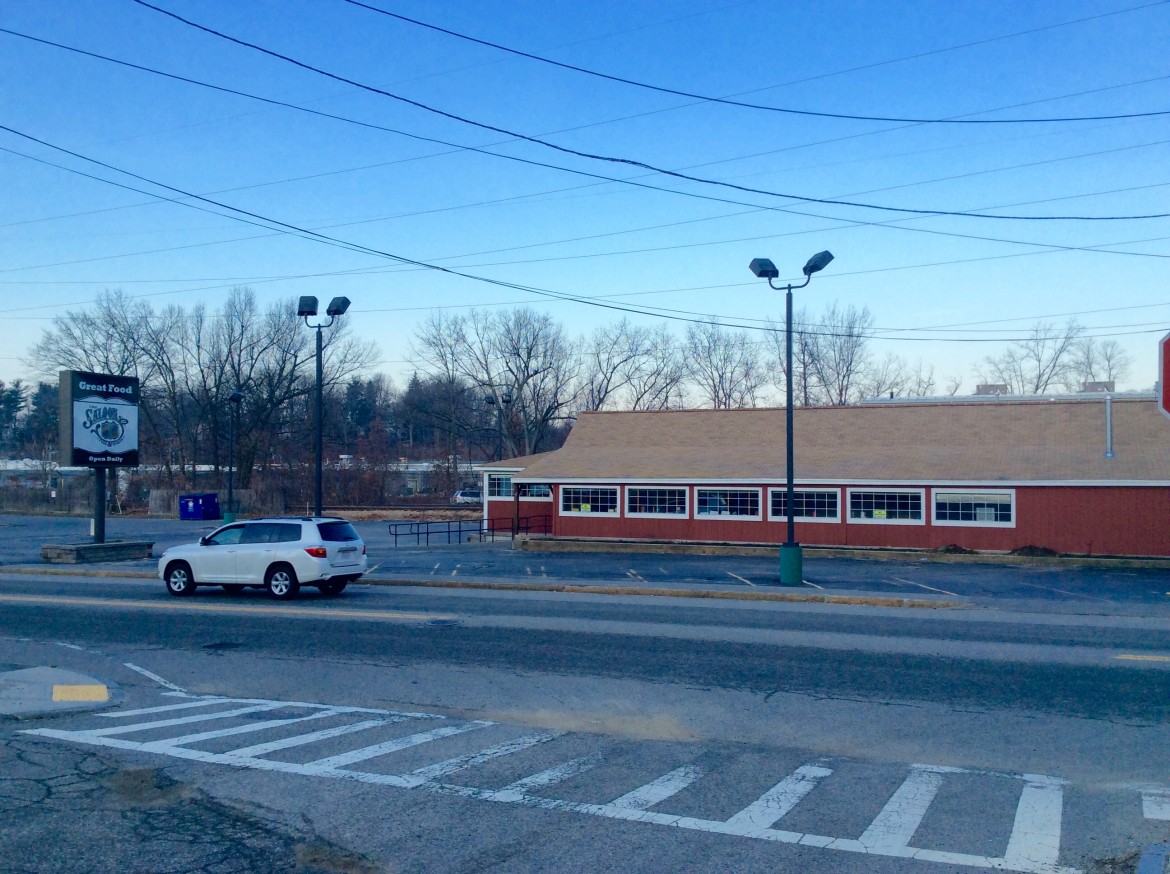 For co-owner Tim Quinn the soon-to-open Quinn’s Irish Pub will stand not only as a fitting complement to the swath of popular watering holes and eateries in the Greendale neighborhood, but more importantly it will be a lasting tribute to his brother, Ryan, who died suddenly at 35 in June 2014.

“Ryan was my only sibling. A lot of what Quinn’s is, is a big tribute to him,” Quinn said.

Quinn, 36, partnered with Cal Dolan and Dessie McKane, co-owners of Funky Murphy’s on Shrewsbury Street (with a second location in Marlborough).

“We’ve known Tim for years and we knew his brother well. It was really unfortunate what happened to [Ryan]. We know a lot of Tim’s close friends. When Tim told us what he was thinking and asked us for our advice, we realized there was potential in that area to do a good, local neighborhood tavern and restaurant,” McKane said.

Quinn, a graduate of Burncoat High School and Quinnipiac University, is a Greendale lifer and believes the pub will be a good addition to the Burncoat neighborhood.

“We’ve got a lot of great bars around here — Smitty’s, Bennie’s, Greendale’s — and a few of them don’t have food. Quinn’s will be a good place for some of those guys and gals to come up the hill and have a bite to eat and then head back to their regular spots,” Quinn said.

The former pharmaceutical salesman was at Worcester Athletic Club when he learned the short-lived Saloon, the previous occupant at 715 West Boylston St., was closing. In less than a week, Quinn had an agreement to take over the location.

“After that, Cal and Dessie caught wind that I was the one doing it. They asked to come into the business and it was pretty much a no-brainer for me,” Quinn said.

“Those guys have had great success and have a great track record,” Quinn added.

Dolan and McKane have owned and operated Funky Murphy’s since 2008. They previously owned Jose Murphy’s, soon to be Whiskey on Water, on Water Street before a burst pipe closed the location in 2013. The pair opened Funky Murphy’s in Marlborough last fall.

For the past three months, Quinn has been learning the ropes of the restaurant business from Dolan and McKane at their Shrewsbury Street location.

“I’ve been bartending, managing, everything from soup to nuts. It’s been a great three-month ride and those guys have been great to work with,” Quinn said.

Quinn bought his childhood home on Brighton Road seven years ago from his parents, Peter and Anne Quinn, both retired city employees who now live on Cape Cod in South Yarmouth.

“I’ve made my roots in this neighborhood,” Quinn said. “I think my parents will be spending a lot more time in Worcester once Quinn’s opens. I’ll be adopting two new roommates and their little dog, Finn.” 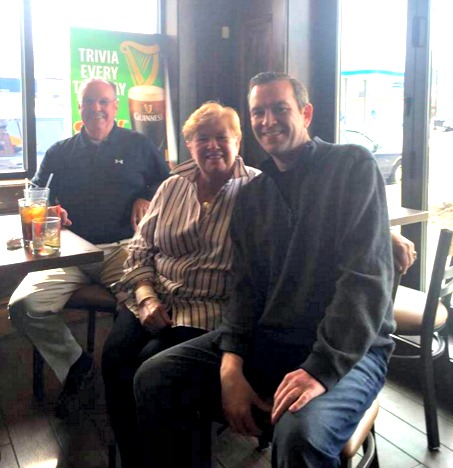 Tim Quinn expects to see parents Pete and Anne, former city employees retired to the Cape, back in the Woo more often now that his West Boylston Street pub is about to open.

Tim’s brother Ryan was also in the medical and pharmaceutical field and graduated from Burncoat. Ryan had a love and talent for cooking, and Tim noted several menu items will pay tribute to Ryan, including the Mighty Quinn Burger, 10 ounces of beef with cheese, lettuce, tomatoes, pickles, onions and Quinn’s secret house sauce.

“In our house, he was the great chef. Ryan could take a pile of food and a bunch of ingredients and turn into a masterpiece,” Quinn said.

“The whole concept of opening a bar was something Ryan and Tim always wanted to do for a long time,” she said. “As the years went on, it got away from them, but when Ryan passed away and this place became available, Tim jumped on it and we all thought it was such a great opportunity.

“Tim is a great people person, and this is such a great fit for him,” McCullough added.

“It’s something that all of us thought was such a great opportunity not only just for Tim, but as a way for Tim to look at his life and have something to do that he loved that wasn’t only just a job. I think losing Ryan made him look at things that way.

“It’s something that has brought us all together over the past few years. Quinn’s is the light at the end of the tunnel to focus on something really good. It’s something for everyone to look forward to,” McCullough said.

“Ryan would be so excited at this opportunity and I know if he were here he would be right alongside Tim doing it.”

Quinn’s Irish Pub is set to open the first week of April — just missing St. Patrick’s Day! Hours are 11 a.m. to 2 a.m. daily; the kitchen will be open nightly until 1 a.m.

“It’s for people looking for some good pub food at pretty much all hours of the day. People can come in and watch the game and have a great spot to eat and enjoy some time with family and friends.”

According to Quinn, the menu will feature daily and weekly specials on a daily and weekly basis, and classic comfort food fare such as fish and chips, shepherd’s pie, prime rib, burgers and pizza.

“We’re going to keep the prices right for people to come in and have an affordable meal,” Quinn said. Entrees currently listed on Quinn’s online menu range from $10-$14.

“The concept of offering a good, quality product at a reasonable price is what we try and do. Quinn’s will have it’s own identity with the menu, entertainment, bar and decor,” McKane said.

Quinn’s Pub is zoned for 32 parking spots and is working with the city to address the need for more parking behind the building. Quinn said they hope to put in a 10-car parking lot in back for employees. The bar owners are also working with other businesses across the street to utilize their lots.

“I think if we work with the other local businesses and let them know that we’re not just a one-and-done operation, I think they’ll realize that we’re going to be here for the long haul,” Quinn said. 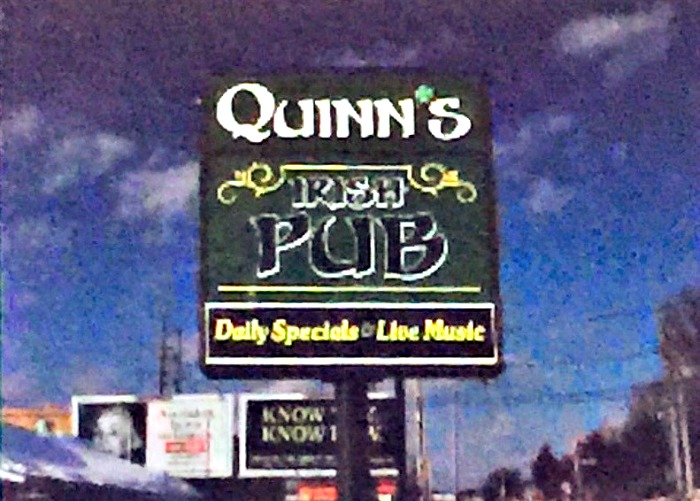 An artist rendering of the sign that will invite Greendale folks into the soon-to-open Quinn’s Irish Pub.

In total, Quinn’s Pub will hire between 20-30 employees including bartenders, kitchen staff, servers, hosts and busboys.

About a mile and a half down the road from Quinn’s is the long-standing and popular O’Connor’s Restaurant and Bar, which opened in 1989.

“Obviously they’ve run an excellent business for the past 25 years or so. They’re way of doing things works really well,” Quinn said.

“I think what we’re looking to do differently is we are going for more of a sports bar feel. We have a horseshoe bar with eight plasma TVs surrounding the bar. We’re already ready for lottery and Keno. It’ll be old-school Irish with a new American style,” Quinn said.

“I think the people of Burncoat and Greendale will appreciate that it’s very local and gives them another choice in a quality restaurant and bar area,” McKane said.

According to Quinn, the amount of support from his family and friends has far exceeded his expectations already.

Quinn said, “Just to see my name up there is really exciting. My friends and family are all looking for the Quinn’s T-shirts and sweatshirts. I keep telling them they’ll have them soon enough.”

This article was originally published in the March 9, 2016, edition of the Sun.