Listening to Professor Muhammad Yunus share his vision of a world without poverty before a full house at Mechanics Hall last week one could not help but be moved.

Yunus was confident and fully at ease before a friendly audience – an audience dominated by Becker College students and otherwise composed of academics, politicians, professionals and others who seized the chance to hear a Nobel Peace Prize laureate.

With each tale of heartbreaking poverty, each sketch of hope reborn and each story of obstacles overcome, it became clear how determined and good a man Yunus is.

It is easy to scoff at the assertion that each of us possesses the power to change the world. It is harder to do so after hearing Yunus explain how the Grameen Bank he founded in 1983 has succeeded in providing credit and opportunity to millions of the poorest people on earth. 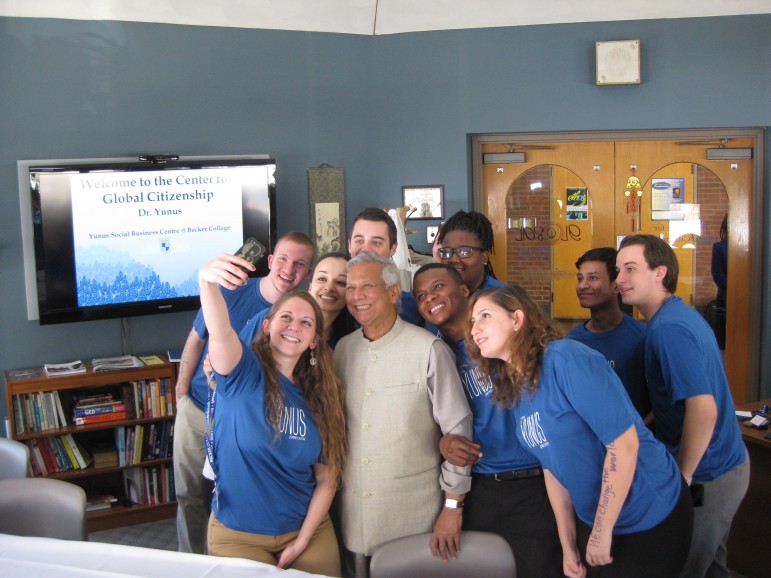 Professor Muhammad Yunus poses for a group selfie with students at Becker College last week. Yunus is a recipient of the U.S. Presidential Medal of Freedom and the Congressional Gold Medal.

Yet there is more to the story.

To be sure, Yunus’ ability to inspire change is clear. Here in Worcester, Becker College deserves credit for its commitment to the principles Yunus has exemplified. The creation last May of the Yunus Social Business Centre is a credit to the leadership of Becker President Robert Johnson and David Jordan, president and CEO of the Seven Hills Foundation. Good things are happening at Becker, and more can be expected.

But Yunus’ story is not a simple tale of idealism triumphing over bureaucratic indifference, or pioneering thinking trumping 20th-century paradigms. His story is deeply involved with history and politics. It is both tied to the past and struggling toward an as-yet-undetermined future.

How many of the youth in attendance knew, for example, that Yunus was instrumental in forming a committee of concerned Bangladeshis in the United States to courageously fight for his nation’s independence from Pakistan? That struggle – the 1971 Bangladesh Liberation War – saw more than 3 million die [according to the Bangladesh government; independent researchers say it was in range of 300,000 to as many as 1.5 million.], including many civilian victims of mass murder, genocidal rape and deportation.

How many of us appreciate how difficult it was for Yunus to turn his back on his career and challenge dominant economic theories? To risk his personal credit and wealth for a new economic model? To turn down millions of dollars from the World Bank because he disagreed with its approach to fighting poverty?

In a remarkable passage in “Banker to the Poor,” Yunus asks, “Where should one place Grameen philosophy in the spectrum of political ideologies? Right? Left? Center?”

He answers by asserting that Grameen’s support for “the least government feasible” and its commitment to free markets means it “must be far right.” He then asserts that its commitment to eliminating poverty and promoting education, health care, gender equality and enterprises driven by social consciousness means Grameen is “on the political left.”

Here matters get complicated. Are free markets the exclusive property of the right? Are education, health care, gender equality and ending poverty causes exclusive to the left? Of course not. Yunus seems determined to create a new political paradigm beyond left and right. But his thought, like all thought, is subject to the limits of language.

Things get more complicated. While there was no hint of it Tuesday, Yunus and Grameen Bank have been the subject of much criticism. Some of that, coming from within Bangladesh and the politically motivated, is baseless. Some, as summarized in this piece at FiveThirtyEight, makes a strong case that microfinance is no panacea.

And things get more complicated still with Yunus’ close relationship to Bill and Hillary Clinton. The Clintons’ interest in and support for Yunus’ work, dating to their Arkansas days, appear genuine, as does their friendship.

But the Washington Examiner [Editor’s note: a hard-right publication, particularly in contrast to ex-New York Times blogger/analyst Nate Silver’s FiveThirtyEight.] questions the propriety of Mrs. Clinton’s support for Yunus while she was secretary of state. And the report notes that two Grameen organizations have donated to the Clinton Foundation, an organization inextricably linked to the personal and political fortunes of the Clintons, and the subject of much pointed and troubling criticism.

My intention is not to tear down a very good man. It is rather to take Yunus seriously when he urges us to be independent, thinking human beings. He calls for us to solve problems, and asserts that human life is “all about creating a world we want to live in.”

As we do so, let us have the strength to question our politics, the honesty to examine our thinking, and the courage to cross-examine our heroes.