The 60-year-old Peters had moved on from coaching after the 2012 American Legion season, his 16th year as head coach of East Side Post 201. He had made a seamless transition from coach to umpire.

“It was great,” said Peters, who still lives in the Clark Street house he grew up in with his wife, Patricia. His son, Michael, who played baseball and football at St. Peter-Marian Junior-Senior High School and then for two years at Catholic University in Washington, D.C., grew up there as well. “I really enjoyed umpiring; it kept me involved, kept me connected to the game.”

All was good for Peters, who has spent the last seven years as a middle school physical education teacher at Worcester’s Abby Kelley Foster Charter Public School. He had coached baseball in the city for more than 20 years – four as head coach at Burncoat High, and then another 16 for East Side. He also was the athletic director at St. Peter-Marian for several years.

More baseball from the Sun: Bryan LaHair and Worcester’s many boys of summer continue the journey [March 27]

“I felt it was time,” Peters said about stepping down following the summer of 2012, when the East Side Raiders, state champions in 2011, finished 21-10. “I didn’t think I would coach again.”

Then, about 14 months ago, while snowblowing his driveway, his cell phone rang.

“It was Cals,” he said, referring to his former East Side player, Mike Callahan, the WPI head coach who also served as an assistant coach to Peters at East Side. “He said to me, ‘Hey, the Wachusett baseball job is open. Do you know anything about that?’ and I said, ‘not a clue.’

“It opened up out of nowhere,” said Peters, who has been an assistant football coach at Wachusett for the last nine years, working his way from defensive backs coach to offensive coordinator. “I knew nothing about it.”

Callahan, and others, suggested to Peters that he apply for the job.

“So, I thought about it and talked to several people whose opinions I respect and decided, if I got the job, that this would be a good opportunity to come back. So, I thought about it some more and made the decision to apply,” Peters said. “A big plus, because I was coaching football here, was I knew the school. It wasn’t like I was going somewhere where everything would be brand new to me.”

Peters, who said he doesn’t know how long he will coach at Wachusett, picked up right where he left off, leading the Mountaineers to a 16-7 overall record, the Midland League A title and a berth in the state Division 1A Tournament, better known since 2014 as the Super-8 Tournament.

Wachusett won its first game in the Super-8 Tournament, defeating Xaverian Brothers of Westwood, 5-2. The Mountaineers dropped their next two Super-8 games and were eliminated from the postseason.

“I felt like I got back into the flow of coaching pretty easily, but it was a whole new learning experience,” Peters said. “There was a big learning curve for the coaching staff last year. We were learning as the season went along; learning about our kids, learning about our opponents. We didn’t have the past to fall back on.”

In addition to Peters, the Wachusett coaching staff last year consisted of Dan Generelli, Chris Murphy, Jimmy Smith, Rusty Eggen and Benji Borrero. All, with the exception of Borrero, are back on the staff this season.

“And, coming into this new situation, I didn’t really know a lot about the other high school teams we were playing; certainly not the way I knew the other Legion teams when I was coaching at East Side,” Peters said. “In Legion I had a pretty good idea what the other teams had, but here, at the high school level, I didn’t know who was who.”

Peters was thrilled for his team, especially the 10 seniors on the squad, when it qualified for the Super-8.

“We had a good group of seniors; I was happy for the kids. They earned it,” said Peters, a 1974 graduate of Burncoat High. “We knew coming in we were taking over a talented team, but give them credit. They went out an earned that Super-8 invitation.”

Some people suggest that Peters and Wachusett would have been better off if the team hadn’t qualified for the Super-8, or that they should have declined the invitation. Peters scoffs at those notions.

“How do I tell the kids we’re not going?” Peters asked. “They earned it; they deserved it. That’s how it goes.”

“I didn’t ask them, but I could tell what they wanted to do. They wanted to play in the Super-8,” said Peters, who acknowledged that he didn’t know if Wachusett could have refused the Super-8 invitation. “I’m not sure about that, but I know one thing, you’re never going to get invited again.” 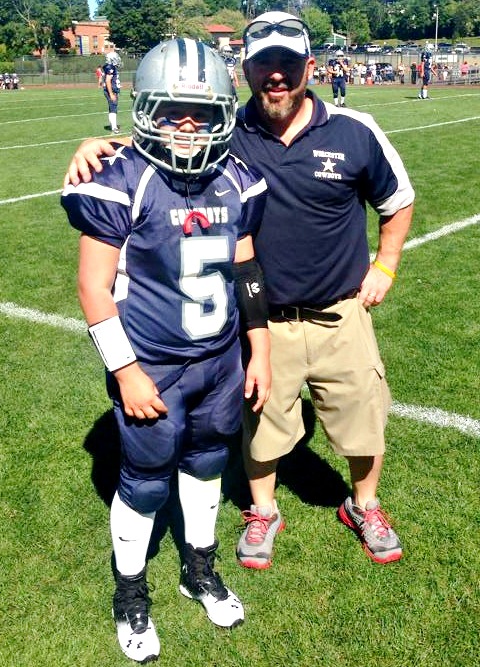 Jim Romeo, right, and his son, Anthony, who played for Romeo as a member of the Worcester Cowboys. Romeo is the new Holy Name head coach.

Holy Name Central Catholic High School has dipped into its gridiron past in order to lead the Naps’ varsity football team into the future.

Romeo, 41, takes over the coaching reins from longtime coach Mike Pucko, who resigned shortly after the end of last season.

This will be Romeo’s first foray into the world of high school coaching. The last eight years the former Marine served as an American Youth Football (AYF) coach, working in the Worcester Cowboys program. Romeo began his coaching career working with 7- and 8-year-olds and finished it working with 13- and 14-year-olds. His son, Anthony, plays for the Cowboys.

“Things are moving very quickly, much more quickly than I anticipated, from a learning curve aspect,” said Romeo, who learned of his hiring March 30. “I met the kids this week. They’re excited; they’re ready to get started and so am I.”

While Romeo never coached with Pucko, he was a frequent visitor to team practices as well as Holy Name’s summer training program.

“During the summer we ran a really top-notch CrossFit program up at Holy Name,” said Pucko, who was known for running the Double Wing, an offense that’s sometimes as complicated and complex as it is simple. “Jim would bring his kids up there and work with us and participate in all our skill drills as well as our fitness drills. He told me he wanted to emulate what we were doing with the Cowboys.”

Romeo said he was impressed with the time Pucko took teaching him the Double Wing and answering his many questions.

“Mike was great; he opened up his program to us and took the time to teach our kids how to run the Double Wing,” Romeo said. “I really gravitated to Mike and took advantage of all the knowledge about the Double Wing that he could give me. He loaned us game films, he lets us see his playbook, and he let our kids practice with his kids up at Holy Name.

“Mike Pucko is just a great guy,” said Romeo. “I’ve got some big shoes to fill.”

Romeo, who played football for Manzello at Holy Name when he was a freshman, and then for Phil O’Neill his sophomore, junior and senior seasons, said Manzello reached out to him in January to see if he would be interested in applying for the head-coaching job.

“He called and asked me if I had any interest,” Romeo said. “I told him my main concern was my lack of experience at the high school level. But, I was interested, especially when Jim explained how they were looking for someone who understood the Holy Name philosophy – Christianity, Student, Athlete. He told me it was important to him that I could relate to the players on those levels rather than X’s and O’s.”

Manzello said when Pucko resigned, Romeo was among a small group of Holy Name alums that he thought might be interested in becoming head coach. Seeing Romeo at camps and practices working with Pucko left a lasting impression.

“Jimmy and Mike really developed a nice relationship over the past couple of years,” Manzello said. “I would watch him as he would pick Mike’s brain and ask questions. I thought it was pretty cool, his coming up and trying to learn as much as he could from Mike. A lot of youth coaches, they think they know everything, but Jimmy wasn’t that way. He wanted to know and he wanted to learn from the best.”

Romeo lives in Worcester with his wife Mabel (Cristiani), a 1994 Holy Name grad, as well as Anthony and the couple’s 12-year-old daughter, Bella.

“I’m a quick study; I think it will all work out for the best,” said Romeo, who is still putting together his coaching staff. “Jim Mullin is staying on, I think, to work with the linemen and another of Mike’s assistants, Scott Anderson has taken on a new role at the school and he doesn’t know what his time constraints are going to be yet, and that will determine if he’s going to be able to coach. Jason Ayik is going to work with the defense.”

Manzello said he had no reservations about the fact that Romeo does not have any prior high school coaching experience.

“The important things to me were that Jimmy is an alum, he is from the neighborhood and he knows what Holy Name is all about,” Manzello said. “He interviewed with the headmaster (Edward Reynolds) and the principal (Dr. Bernie Audette) and they were both very impressed with him. I think he’ll be a great fit for us.” 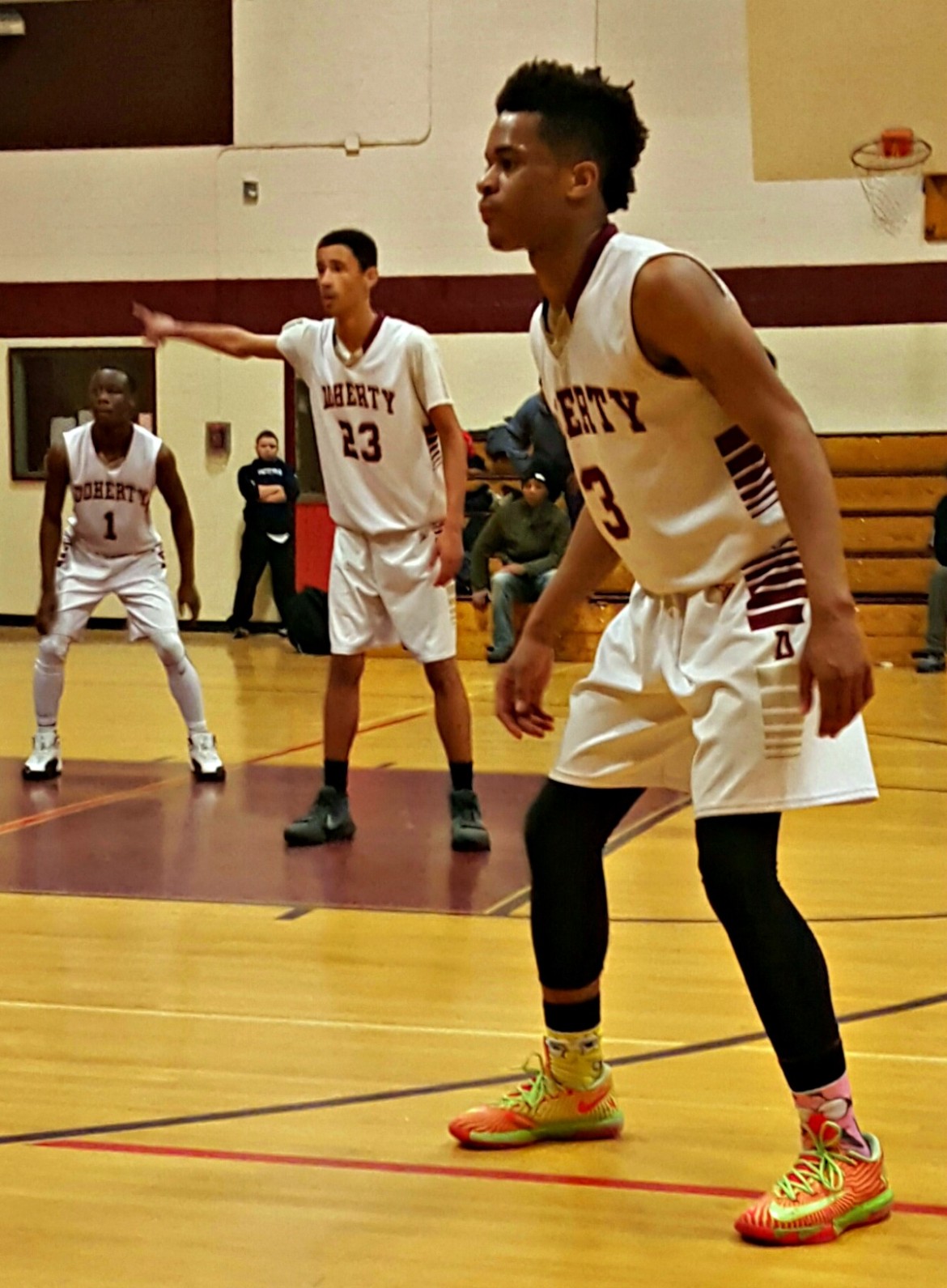 Tariq Massenburg eyes football in college, but the Doherty star more than holds his own on the high school hardwood.

The Inter-High has announced its boys’ and girls’ basketball all-stars from the recently completed season. The players were selected by a panel of the league’s coaching staffs.

The Central Mass Conference has announced its boys’ and girls’ basketball all-stars from the recently completed season.