As a city, we know these names.

Thanks to a website launched two years ago by a Worcester Police officer, now we can know them better.

Kelley Square, for instance, criss-crossed by tens of thousands of cars daily, is named for Sgt. Cornelius F. Kelley. The steely-calm son of Irish immigrants Maurice and Johanna, Kelley was killed (“severely gassed”) near Verdun, France, in World War I. 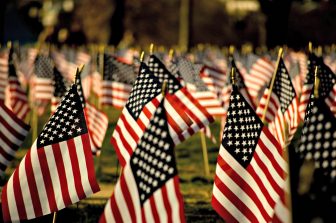 He shipped out for Europe the same day as Pvt. John F. Brosnihan, whose name marks another city square. Serving and dying in separate parts of France, both city sons were awarded the French Croix de Guerre for repairing vital telephone lines while under fire by the Germans. Kelley’s citation says he did this “with the greatest coolness and the most absolute indifference to danger.”

Patrolman Sean M. Lovely Sr., an Army veteran of the Persian Gulf, spent years visiting and investigating the 237 veteran memorial markers found all over the city.

His work collecting documents, photos and information has created an online treasure house of Worcester war stories and glimpses of the home front. The website is maintained by Officer Lovely and the City of Worcester Veterans Square Project.

These tall familiar markers commemorate a fraction of the service men and women who went off to war and did not come home alive. Some markers stand at major intersections and squares, lending their name to the busy come-and-go. Most of the others have posts at medians, sidewalks, and other public nooks.

They are made from granite and heartbreak. They need — and generally receive, thanks to veterans groups, city workers and volunteers — upkeep. This time of year, wreaths and flowers offer fragile decoration.

People can run their fingers over the blackened brass inscriptions, with their sad, spare details.

Through modern technology we can see photographs and newspaper clippings, and maybe a cherished letter home, the terrible telegram that came. Armed with information and our imagination, it’s possible to cross bridges to the past.

The sacrifices these pillars represent can be almost beyond description.

Two are World War II veterans Joseph W., age 18, and James B., age 23, sons of Francis E. and Mary McKeon. Both perished in Europe in 1944, Joseph in a sinking in the English Channel, James in combat in France. Their marker was dedicated in 1947 at the intersection of Cambridge Street and the street then known as Middle River Road, near the College of the Holy Cross.

When a third star had to be added for 23-year-old Private Robert E. McKeon — killed in Korea in 1950, the first of the 189 casualties Worcester endured there — the city was so saddened and grateful it renamed Middle River Road to McKeon Road. 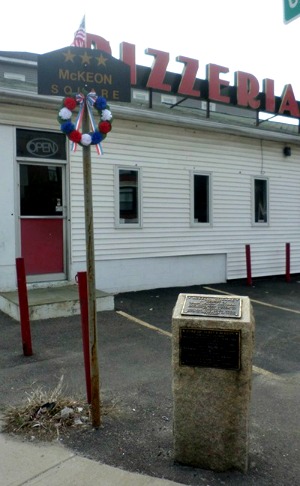 Behind each of the 237 markers, there’s a sobering story worth knowing.

Click on the one for Cpl. Homer J. Wheaton, for example, and read about the “chilled hands and nervous fingers” — and the heroism — that killed him inside a cave in France’s Chemin des Dames. An account for the Worcester Veterans Square Project website appeared in the Post-Standard of Syracuse, N.Y., where Wheaton grew up.

Wheaton was passing out grenades to eight men, according to the account, when one nervous soldier dropped his and the pin fell out. During the five ticking seconds before explosion, Wheaton grabbed the grenade, found no place to throw it, and “chugged it to his side.”

He died on the spot, but the others survived.

The 32-year-old corporal didn’t want to die, but wanted his buddies to live.

Wheaton, once a sports editor at The Evening Gazette, was Worcester’s first of 284 World War I casualties. Modern-day Wheaton Square, at Grove and Salisbury streets, is a far cry removed from that cold underground hideout in northern France 98 years ago.

This Memorial Day Weekend, immersed in our blessings and freedoms, maybe spend a few moments on foreign shores. Break down barriers of distance and time, and click on the name of a city memorial marker — one you’re curious about, or one at random.

It can be a remarkably upsetting way, and an illuminating one, to pay your respects.

One thought on “Editorial: Worcester memorials and caring to remember”