For many, the former splendor of the Denholms department store in downtown Worcester has faded into memories of the distant past.

For Christopher Sawyer, it’s his life’s work to bring a touch of the grandeur of Denholms back for a new generation of Worcester residents — all in the name of paying tribute to his grandmother.

Sawyer’s grandmother, Josephine “Jo” Carbone, worked at Denholms for 26 years as a buyer and merchandise manager. Carbone worked from 1947 until the once bustling store closed in 1973. 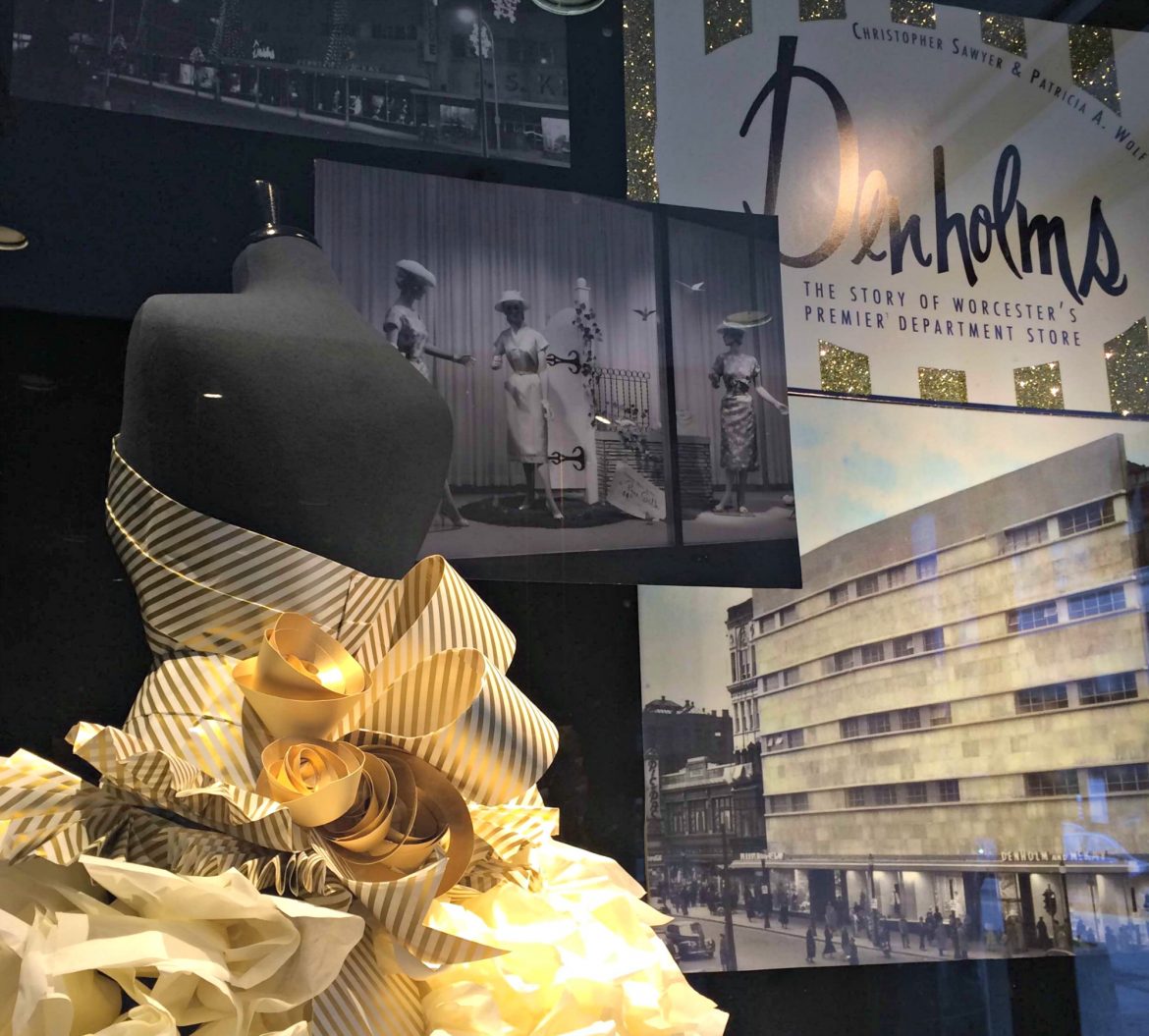 The window displays at the Denholm Building not only dress up the Main Street landmark’s facade but also highlight the building’s history.

“I started working on the windows because I saw the condition of the building. I wanted to lend my hand any way I could,” Sawyer said. “At the same time, I wanted to honor my grandmother by doing this work.”

Over the past 30 years, Sawyer, a senior creative director for Ralph Lauren Corp. for 13 years, has been collecting memorabilia and curating Denholms items in an attempt to preserve the history of the once-largest department store in Central Massachusetts.

“The store had sophisticated window displays and promotional literature,” reads a 2012 column from historian Albert B. Southwick in the Telegram & Gazette. “Its imaginative window displays were a constant education and entertainment for passersby. Holidays were especially important. 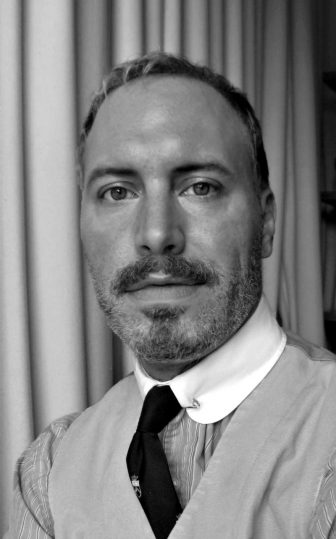 Sawyer, originally of Princeton and now living in Boston, began work on the windows in the fall of 2009 and has been updating the windows twice a year.

“We do a full on-window change in May or June every year. And in November, I come in and do a holiday layer,” Sawyer said.

Sawyer will be updating the window displays again sometime in June.

“He’s a wonderful guy. He does such great work. He felt so bad about how our windows looked, and now he’s been working for years updating the window displays,” Randy Feldman, an immigration attorney with an office on the fifth floor of the Denholm building on Main Street, said.

In 2011, along with co-author Patricia A. Wolf, daughter of former Denholms president Henry Wolf, Sawyer published the book “Denholms: The Story of Worcester’s Premier Department Store.”

In his home in Boston, Sawyer is collecting all the memorabilia he has and creating a space to showcase it. One of the rooms in his home is dedicated to resembling the third floor of the Denholms store.

“I can’t believe how much I’ve acquired over the years. It tells the history of the building and the store from 1882 until present day.”

Among his collection, Sawyer points to a piece of an escalator, the store directory, and an original mannequin with clothing as his favorite pieces. 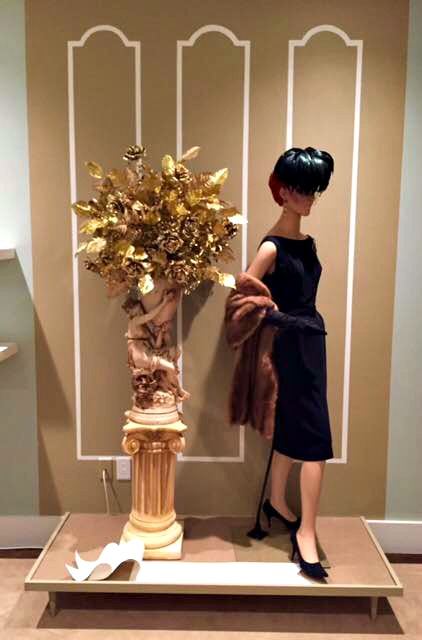 Additionally, Sawyer has a metal contraption women used to help them tie their boots, from when the store opened in 1882.

As the Sun reported last week, the first floor of the Denholm building is part of the Worcester Redevelopment Authority’s urban renewal plan.

As part of the plan, six office condominiums — including the nonprofit women’s business outfitters Dress for Success, the Denholm Coffee Shop and a Post Office branch — located on the first floor of the Denholm building would be potentially acquired by the WRA for redevelopment into proposed retail, restaurant and commercial space. 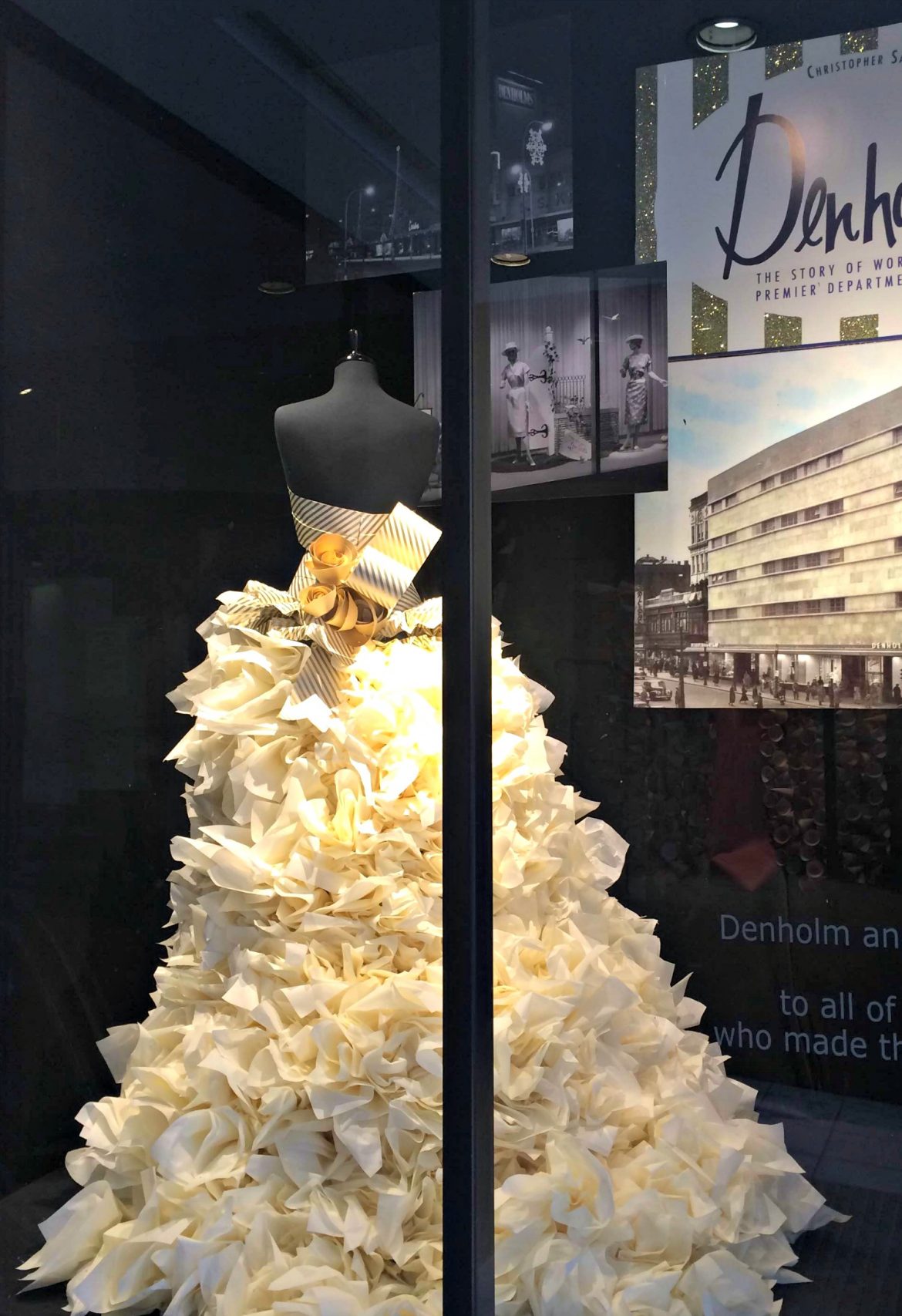 Sawyer has done window displays for each of those businesses, as well as the Worcester Community Action Council, which is on the second floor of the Denholm building.

For his part, Sawyer is looking forward to what the city specifically outlines for the Denholm space and hopes that he can offer his talents to the project.

“That’s my ultimate dream is to be able to work with all of them. I love that city so much. And I love the efforts of revitalizing downtown. I think it’s a solid plan and I think it will be great,” Sawyer said.

Sawyer says he plans to keep decorating the Denholm windows as long as he can. 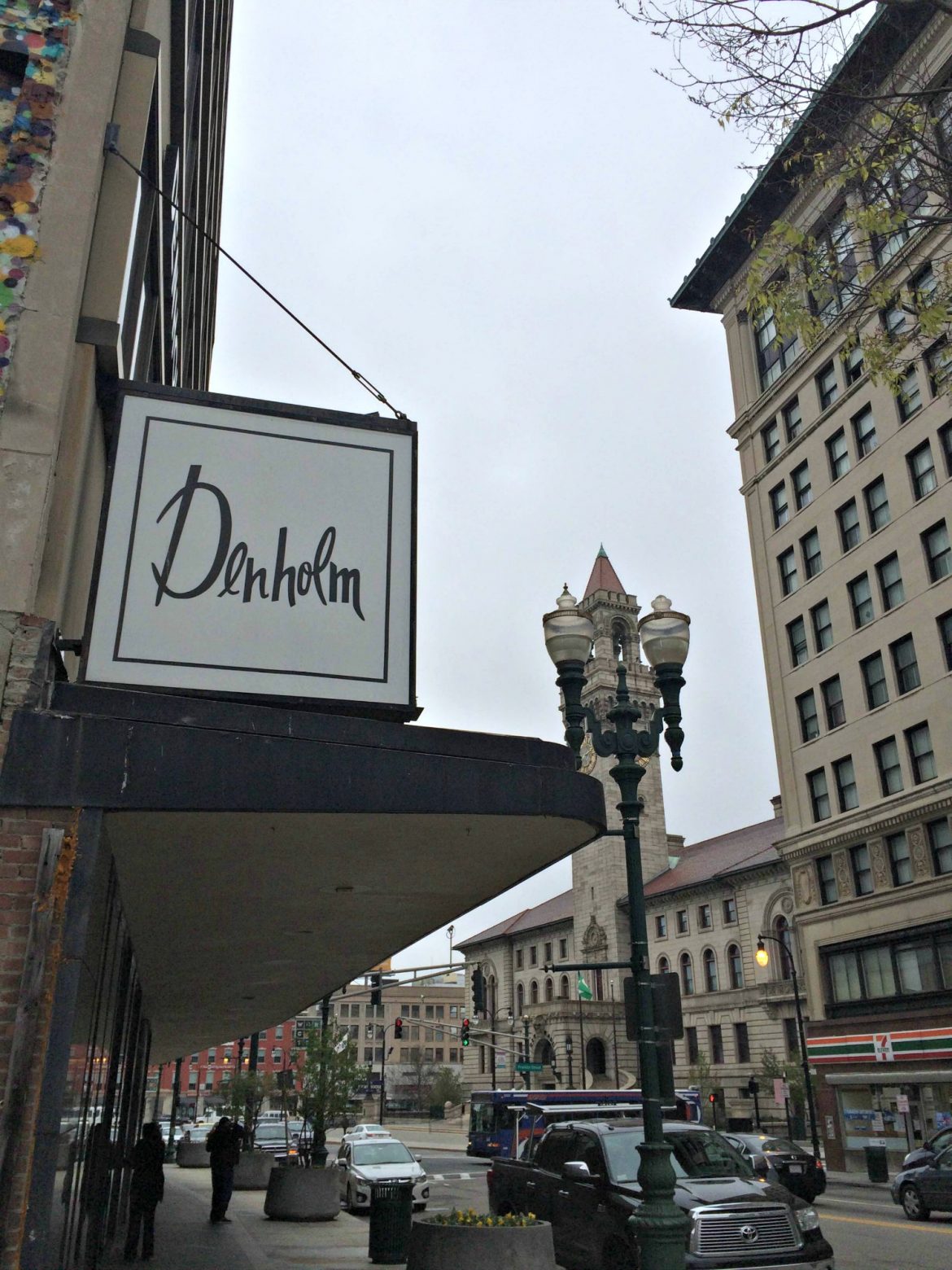 “I think [my goal] is to foster a better streetscape and to show that the building is viable, even though it doesn’t look great right now,” Sawyer said. “This is how buildings can look. There are so many vacant window fronts downtown.” He said he wants to “show people the importance of this and how it can create a vivid city.”

“It’s such a prominent location and the windows are still very important to that building. It has an amazing history.”

This article was originally published in the May 8, 2016 edition of the Sun.