Glen was back from England with Adekunle (Theresa), my partner.

We all rejoiced for seeing our new son, a healthy teenage man. His smiles increased amid lots of good memories of how he went to England for his operations. He explained everything that went on. I looked the scar in his chest. His mom burst into tears.

This, I said, was the work of God.

If Theresa and Glen would have gone to live in Sierra Leone, the tension of the war and the deplorable condition of Glen’s young heart would have killed both of them out there. We kept in contact with friends who inquired about our struggles, while Theresa’s family in England were completely astonished by the work I did to find Glen the help that saved his life.

Another important aspect was our wedding. 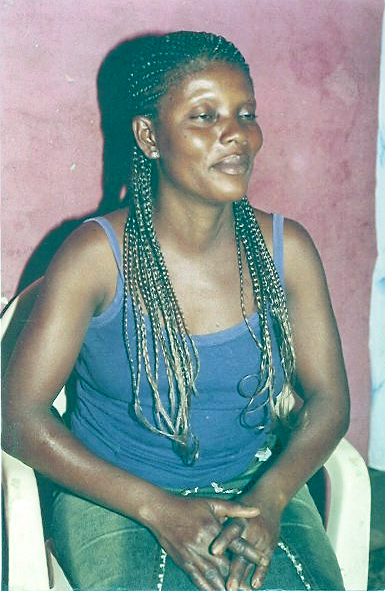 We did not need to continue cohabiting without being wedded in church. I was well known to be living with Theresa out of wedlock by those I had gone to the seminary with, co-workers, and fellow churchgoers. That pressure was not enough. But I craved a proper life as a Catholic, even while those I thought were friends were bent on destroying our plans.

Read Augustine’s last installment, Glen’s Long Road to Health, or scroll down to follow his incredible journey from the beginning.

Sia, my brother’s wife, had spread the rumor that I was not functioning as a man. She could not prove it, but could say it all around to her friends. I did not quarrel with her but tried to forge ahead in peace. She saw my kids but still could not believe that I was capable of having my own children. She believed they were somebody else’s children, not mine. I was not promiscuous either. I wanted to be a gentleman and not a flirting man.

I told my brother Henry about my intention to marry my longtime friend. He was happy and asked me to pray about it, then tell him if it was real. Theresa and I were bent on prayers as we made wedding plans without money.

I tried my best to work double to raise more money to help us out. I then went to declare our intentions to our parish priest, because it would take three months doing the marriage counseling before we could be married in the Catholic Church. I was excited but fearful, due to my financial status.

Meanwhile my dad was behind rebel lines with no money or food to live on.

They were in a town called Bo in Sierra Leone. No rebels could enter there because of the Kamajors. They were local tribal fighters, at that time ready to dislodge rebels. Indeed they protected my hometown of Bo. I had to send money to my dad. Sometimes it was stolen by the person who takes the money there. I had put a $100 note in a Christmas card and gave it to someone to be delivered to him. It was for nothing. It was not delivered. 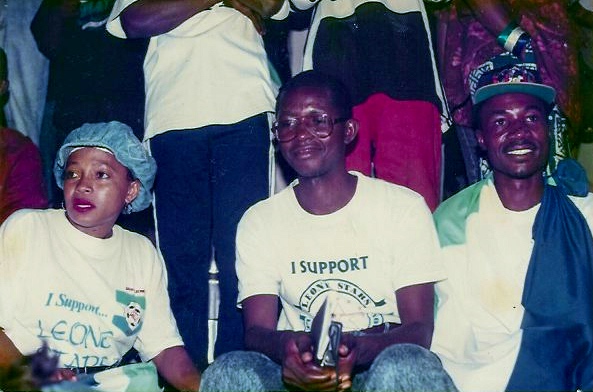 Augustine, center, attends a Sierra Leone-Mali soccer match with other refugees in 1997.

I had money pressure here too. We raised some and were buying food and other items in bits. Many believed we would not make it because of the financial shambles we were in.

We were resilient. Our class was going fine, but the last month of the counseling saw some turbulent days. It was a challenge too. The class was superb, because we were taught some basics of life. The most important areas were those of living for the other. My relationship was first, not even children; they were secondary to our relationship, the priest, Father Pius, stressed.

The class was an excellent source of telling each other the truth. There was no pretense there. I brought up the idea of her parents looking low on me. A month before our wedding date, we were asked by the priest to bring a consent letter from Theresa’s family. He said they should give their blessings.

She told her family. Their answer was no.

Father Pius had sent a letter to Theresa’s parish priest, who happened to be my friend and a cousin to Theresa. He was persuaded not to give consent by Theresa’s family.

No one could understand why the family was so much against me. Father Pius waited for the response from Theresa’s parish priest, but it never came. He wrote a personal letter to Theresa explaining why he could not send her parents’ consent. But he sent his own letter attesting that Theresa and I were not related by blood. I hail from upcountry, where diamonds abound. Theresa hails from the descendants of freed slaves, who had returned from America. So we were free to marry in that sense.

Theresa became worried and restless. I did not bother; I knew the wedding would not be stopped.

We made several changes to our wedding date because of the problems. But we were freed at last. Father Pius called us and asked if we could make a date to wed. It was imminent and we liked it. It was the beginning of the end of the problem.

He then declared that we could get our wedding blessed in church. We made a date for July 1, 2006. We had postponed it from before Christmas, after Christmas, after Lent, and another date. This date was going to stick because we waited for no letter from the people Theresa calls her own. The case was almost closed with them, since we did not need their letter anymore.

There was no functional church in my area of the Gambia; the war was still raging high because of the diamonds and the rebels’ quest for supremacy in the area. But Father Pius insisted that I get a letter from my parish priest stating that I had never been married before. In fact I was a seminarian prior to my running away from Sierra Leone to Gambia. I had spent a long time with the mission.

It finally proved impossible getting the required document. This was my first and last wedding, I told myself. But the impossible priest wanted a proof.

Theresa’s family could only watch from England and Sierra Leone. All that I did getting Glen to go to the U.K. and getting his operation at no cost, I thought, was quite something but yet they believed that I was worth nothing and would continue to be worthless. They had already cut all support from their sister, and demanded that she leave my house because she was not married to me — and they will not allow me to marry her. Our deal was done and we did not say a word to them about the progress. 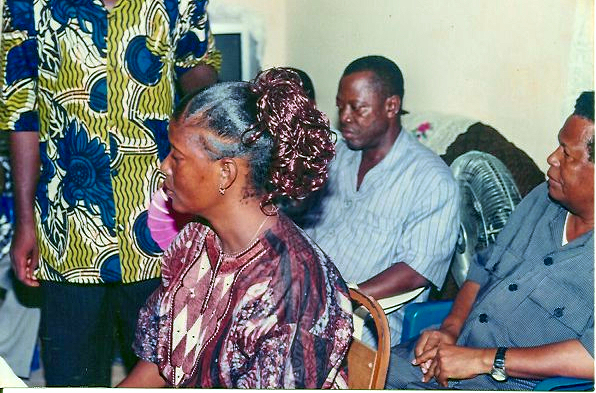 We made our invitations and sent out to friends. I already had my plans of settling down with Theresa, who had proved helpful and loving to my family, friends and me. The day was coming close. It had coincided with the African Union Summit to be held in Banjul on the same day as us, July 1. It did not distract my friends; they were ready to support.

Many people would visit such occasions for what the couple can provide at the end, and we had dozens of such people.

We had agreed on inviting those who did not like us, too. My brother’s wife Sia would not come close to me because she hated me already for being, she thought, impotent. Her perception was based perhaps on what she had heard about me, or better still, on what she saw: I had time for my church and not women, I thought.

We had arranged for people to take different areas to be in charge of. Theresa was quite strong in organizing such. 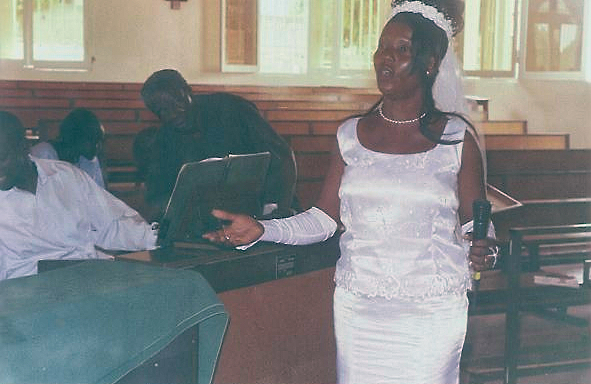 Theresa speaks to the guests at the wedding.

We had dispatched my brother and some elders to organize the engagement party. The place was a bit far. That was in a different area of town, where Theresa’s uncle’s ex-wife lived. My brother was willing to take over since there was no other family member around. Love is not for money, he said.

The engagement day was full of fun. It was a mixture of traditional culture and Western style. There was calabash, needle and thread, and money. It was my first experience. Theresa had seen it several times. My elder brother, since passed, was there. I came with some friends and cousins who did not know the house. There was no car to ferry us, but the love made us go in joy. I sang funny but important songs that amused everyone. The whole thing ended in joy; we were closer to marrying.

The invited guests came the next day, Saturday. I managed to keep up my appearance.

I had bought my coat material from a big shop in Banjul [a town in Gambia] for the best men too. I found a hole in the coat material and I pretended to be very angry with the shopkeeper for selling trash to me. I did not have enough money for all my people. I bought the material very cheap for the three of us. I made extra material for myself. We were all set for the wedding.

I could not sleep, meditating on marriage life. I cannot divorce, according to my church’s doctrine. 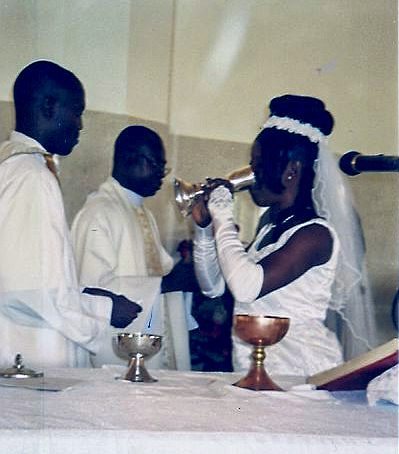 Augustine and Theresa get married.

I thought that was quite difficult. Convincing myself, I said, both of us shall become one. The church was packed with friends and well-wishers. I had invited a lot of priests, those who were my seminary mates. Father Edu Gomez was my friend and he was the chief celebrant.The occasion was superb.

I was at the church before Theresa. I waited for help but there was none in sight. The church was neat and everything up to standard. The prayer had started in full.

The ceremony proper had started with a great attendance. My daughter and son Glen were there too. One of my nieces came and took Glen, Mary and my sister’s daughter away from the Mass. My niece, a bit primitive, said, “I took the children because it is not good for a child to see where their parents wed. It is a bad omen to rejoice in your parents’ wedding Mass.” 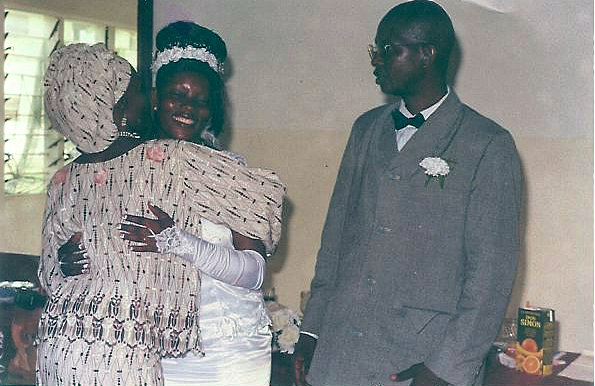 Theresa and Augustine receive well-wishers at their wedding.

The wedding had passed and marriage completed, before long. Theresa and I came out miming a hymn, “Let there be love shared among us.” We stole the show with thunderous applause from our performance.

149 thoughts on “The unbelievably true story of Augustine Kanjia continues … Part 17: A Wedding Without Parents”