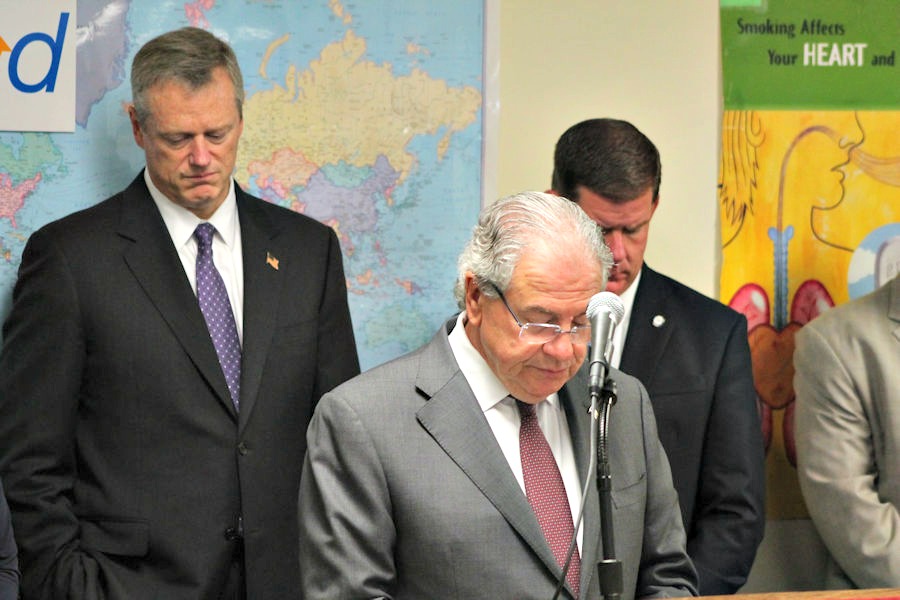 Gov. Charlie Baker was busy Friday, here pausing with House Speaker Robert DeLeo and Boston Mayor Marty Walsh for a moment of silence to honor the victims of this week’s shooting tragedies in Texas, Minnesota and Louisiana.

“No one should be discriminated against in Massachusetts because of their gender identity,” Baker said in a statement announcing he’d signed the bill. “This compromise legislation extends additional protections to the Commonwealth’s transgender community, and includes language to address the public safety concerns expressed by some by requiring the Attorney General to issue regulations to protect against people abusing the law.”

A compromise bill (S. 2407) was approved by both branches of the Legislature on Thursday, passing the House on a 117-36 vote and clearing the Senate on a voice vote. It bans discrimination based on gender identity in places of public accommodations and would allow transgender people to use sex-segregated facilities, like locker rooms and bathrooms, that correspond to their gender identity and not necessarily anatomical sex.

The bill directs the Massachusetts Commission Against Discrimination to adopt policies on enforcing the law and also requires the Attorney General’s office to provide guidance on how to handle legal action if any person were to assert gender identity for an improper purpose. Both offices have until Sept. 1 to report their recommendations, with the law taking full effect on Oct. 1.

After refusing to say whether he would sign or veto the bill that sparked vigorous debate, Baker in June said he would sign the House version of the bill, which contained the language relating to the attorney general and MCAD.

The Massachusetts Family Institute, which vocally opposed the bill, issued a statement Friday saying its members were “extremely disappointed that Governor Baker has broken his original campaign promise to veto this bill.” 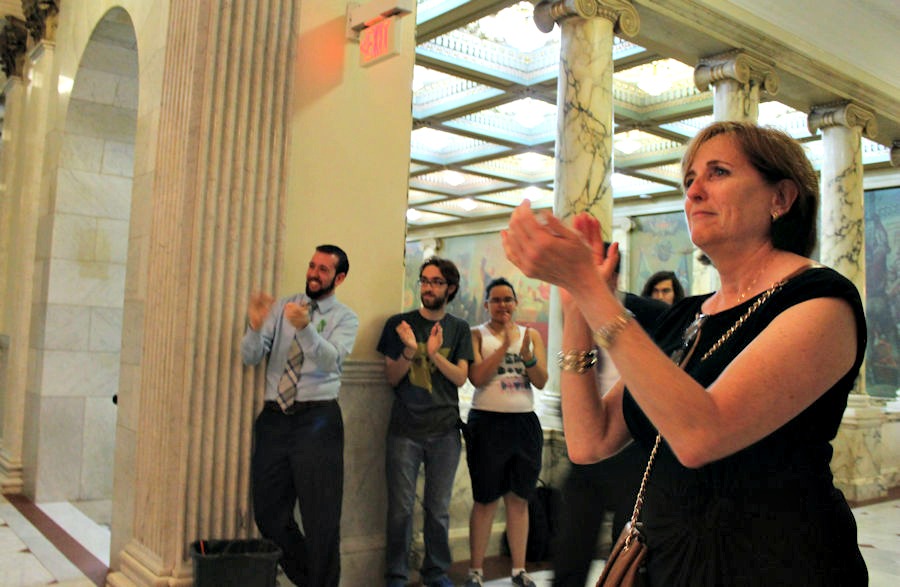 Arline Isaacson, co-chair of the Gay and Lesbian Political Caucus, led a round of applause Thursday as Senators exited the chamber following the enactment of a bill protecting transgender individuals from discrimination in places of public accommodations.

At the time, Patrick said he signed the bill as a matter of “conscience” even though lawmakers had stripped a provision that would have required all “sex-segregated facilities” to grant admission to people based on their gender identity, rather than their biological gender. The provision, which mirrors the bill enacted on Thursday, was removed in 2011 to build consensus among lawmakers for the law Patrick signed that year.

Massachusetts becomes the 18th state to have such a law on its books.

Just hours after the Supreme Judicial Court cleared the way for a marijuana legalization ballot initiative to go to voters in November, the group working to legalize cannabis turned in what it said is enough signatures to secure its slot on the Nov. 8 ballot.

Just after noon, the campaign handed in to the secretary of state’s office the last of more than 25,000 signatures — 10,792 of which must be certified to guarantee the question a place on the ballot.

Earlier in the day, the SJC ordered the attorney general to rewrite the title and one-sentence description of the ballot initiative that would legalize the adult use of marijuana.

The title of the petition, “Marijuana Legalization,” is “unfair and clearly misleading,” Gants wrote, because the petition also relates to the regulation and taxation of cannabis and cannabis products. Instead, the SJC ruled that the title should be changed to “Legalization, Regulation, and Taxation of Marijuana.”

The Campaign for a Safe and Healthy Massachusetts, which opposes the marijuana ballot question with the backing of Gov. Charlie Baker, Boston Mayor Martin Walsh and House Speaker Robert DeLeo, said the group is happy the SJC recognized the importance of pointing out that the ballot question would legalize more than the leafy green plant.

Meanwhile, the Campaign to Regulate Marijuana Like Alcohol celebrated the SJC decision as a win for voters who want to legalize marijuana and establish a regulatory and taxation structure for the substance.

The ballot initiative would impose a 3.75 percent state excise tax on retail marijuana sales, allow adults 21 and older to possess up to an ounce of marijuana in public, and establish a Cannabis Control Commission to oversee the new industry, among other provisions.

“My lawn’s dead … [the neighborhood is] completely smoked. [It’s] quite striking.”

“Different parts of the state are at different levels,” Beaton said. “The biggest concern is the central and northeastern part of the state. That’s where a lot of the focus was and is.”

The U.S. Drought Monitor, produced through a partnership between the National Drought Mitigation Center at the University of Nebraska-Lincoln and the U.S. Department of Agriculture and the National Oceanic and Atmospheric Administration, estimated 44.3 percent of Massachusetts was experiencing abnormally dry conditions as of Tuesday, with 25.3 percent in a moderate drought and 29.6 percent of the state — the areas referenced by Beaton — in a severe drought.

“We’re just watching this as closely as we can,” said Beaton.

An advisory represents the second of five drought condition levels, and a watch reflects a higher degree of drought marked by “extremely low groundwater and streamflow levels resulting from a precipitation deficit of nearly ten inches over the past 12 months, including a lack of snowfall in the winter months.”

The Senate plans to debate Gov. Charlie Baker’s municipal government reform bill next week, as well as an economic development bill and legislation regarding financial protections and laundry drying.

The municipal government bill, a version of which was approved by the House in June (H. 4419), is teed up for debate on Wednesday, July 13. Senators have until 5 p.m. Monday to file amendments. The Senate Ways and Means Committee has put forward a new draft of the bill (S. 2410).

On Tuesday, the Senate plans to take up a bill dubbed the Family Financial Protection Act, which relates to consumer debts. The Senate is considering a bill (S. 2230) that is a Financial Services Committee redraft of legislation originally filed by Sen. Jamie Eldridge, with the Ways and Means Committee offering another redraft (S. 2409) that will likely be the vehicle for Senate floor debate.

The Senate on Thursday also adopted an order scheduling a Tuesday debate on a Sen. Michael Barrett bill (S. 1056, S. 2408) that would allow municipalities to ban homeowner associations from prohibiting clotheslines or charging someone a fee to use a clothesline. A city or town would first have to put the issue before their voters as a ballot question.

Amendments are due Monday at noon for both of the bills scheduled for Tuesday.

The Senate on Thursday plans to take up an economic development bill, pending its advancement through committees earlier in the week. 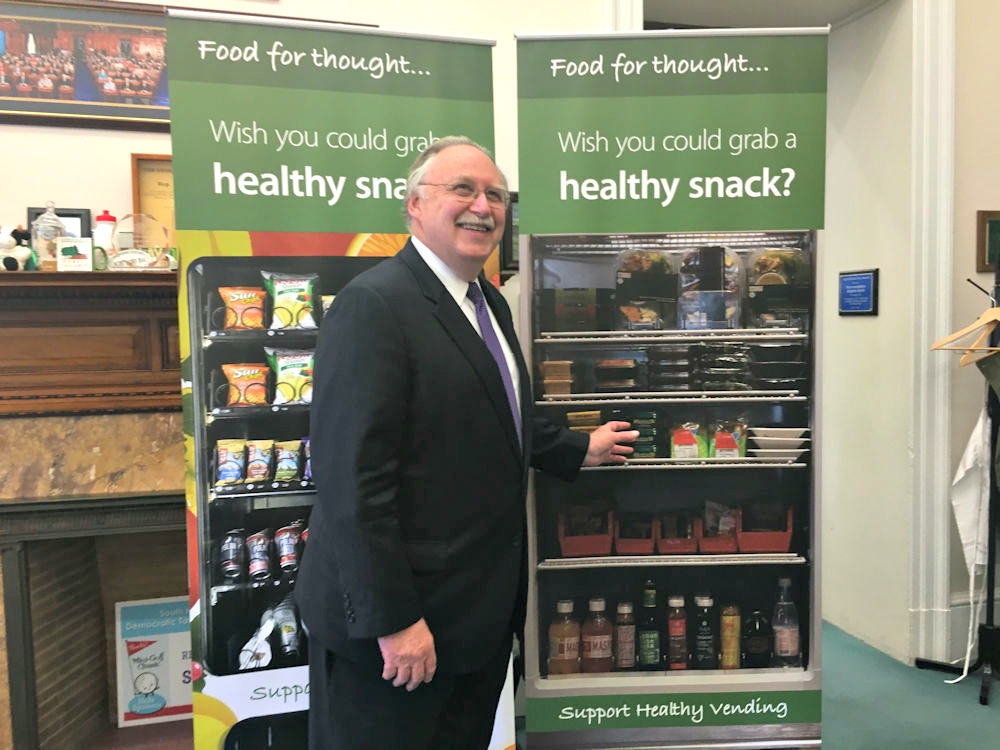 “Whole-grain Goldfish — I didn’t even know those existed,” Kulik said, peering at a banner depicting a life-size vending machine stocked with snacks like crackers, pumpkin seeds, seltzer and hummus.

The banners are traveling through the State House, making stops in or outside lawmakers’ offices in an attempt to drum up awareness and support for a bill that would require any food or drinks sold in vending machines on state property “be limited to food and beverage items that comply with the nutritional standards” to be set by the Department of Public Health commissioner.

Backed by the American Heart Association, the bill (H. 3988) was referred to the House Ways and Means Committee in May after earning an endorsement from the Health Care Financing Committee. The bill is a Public Health Committee redraft of legislation originally filed by Kulik (H. 2005) in January 2015.

“This is a bill that I have cosponsored for I think two sessions, and the support has been growing as people are more interested in healthy foods,” Kulik said.

The bill lays out three different sets of nutrition and food procurement standards that the state regulations would have to meet or exceed, ranging from a requirement that all food options be healthy to 30 percent healthy on the low end. The American Heart Association advocates for the middle set of standards, which calls for 50 percent healthy contents.

Kulik said his current go-to snack at the State House vending machines is one that wouldn’t earn a designation of health food: Reese’s Peanut Butter Cups. Gesturing at the snacks displayed on the healthy vending banner, he said he thinks that choice could change with other options available.

“You know, if there was some dried fruit for example, that would be a great opportunity,” the Worthington Democrat said. “I see some granola bars and things in here that I would reach for, some packages of nuts. It would be great. I would be happy to buy those.”