The passing of Pat Oroszko last month is one of those things that makes people wonder what the universe is thinking when it decides to call some people home and not others.

Patrick C. Oroszko, a basketball player who honed his craft at St. John’s High School of Shrewsbury and Clark University – and later served the Cougars as an assistant men’s basketball coach and rose to Clark Graduate School’s director of student recruitment – died last month of cancer of the esophagus after a valiant and gritty seventh-month fight.

This past Wednesday he would have turned 35. 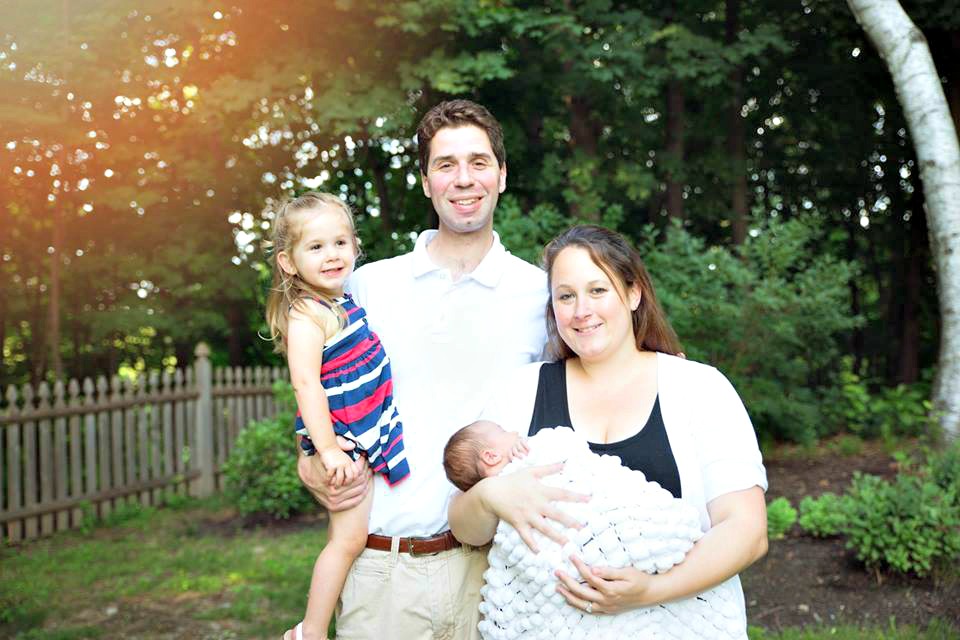 Pat with his daughter Allison, wife Courtney and son Ryan.

Oroszko’s obituary did a commendable job of detailing the events of his life, including the name of his wife, how long they’d been married, the names and ages of his children, the names of his brother and parents and in-laws. It even mentioned that he was a two-time team captain at Clark and that he enjoyed concerts and golf, the New England Patriots and watching professional wrestling on television.

What Oroszko’s obituary did not do — could not do — is adequately describe the man behind the death notice.

With the help of his wife, Courtney, brother Chris and former Clark teammates John Ginnity and Bobby Corazzini, here goes:

“He was just a good guy,” Courtney Oroszko said about her husband of five years, while unsuccessfully fighting back tears. “He was the most good and genuine person. He never had a bad thing to say about anyone. He was just such a good person, a good friend.

“We started off as friends and then he became my best friend and we fell in love, and here we are. He was a good man.”

Those who knew him obviously agreed because they traveled from all over the state – all over the country – to pay their respects to a life well lived by a man who was taken much too soon. The day before Pat Oroszko died, John Phelan, a former Clark teammate, flew in from Washington for an hour to say goodbye.

“It was unbelievable,” Courtney said of the outpouring of love for her husband. “At the wake, more than 700 people from all different parts of Pat’s life came to pay their respects; people I had heard of but never met, people we hadn’t seen in years. 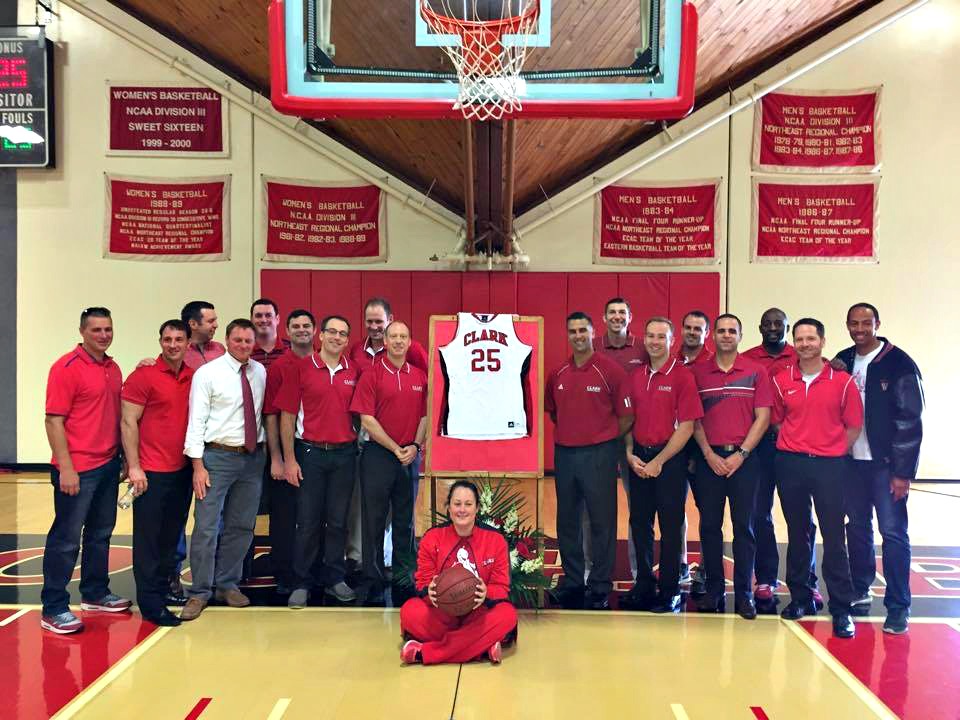 Friends gather with Courtney, center, to remember Pat and his No. 25.

“The celebration at Clark was like nothing I had ever seen before,” she continued. “People that we went to college with that I haven’t even talked to in years came and told me how sad they were to hear about Pat, about what an amazing guy he was, about what an impact he made in their life.

“I remember saying to someone, ‘I kind of fell in love with him all over again after those two days.’ ”

Not surprisingly, Pat Oroszko’s wake and the celebration of his life held the following day at Clark University’s Kneller Athletic Center were packed with former teammates, players he coached and friends he made — all there to honor the man they affectionately called “Turtle.” 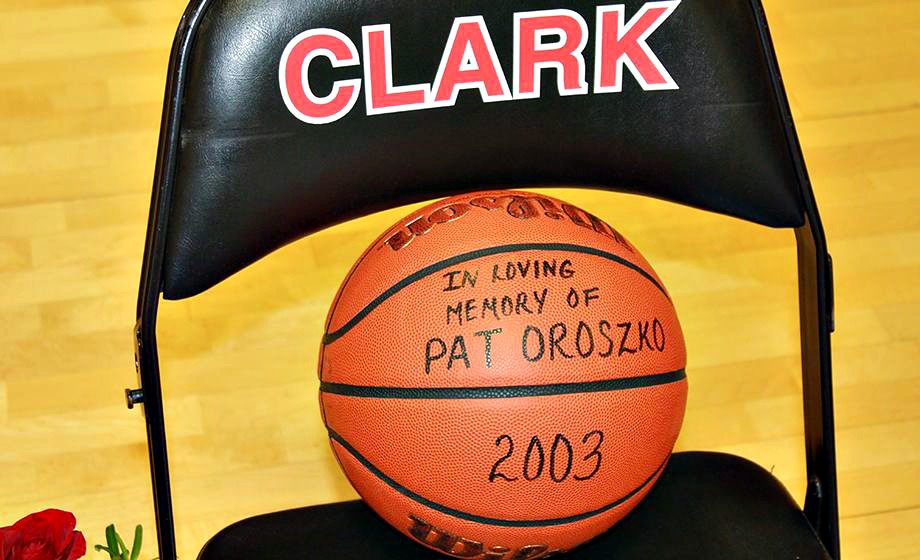 For his memorial, Pat asked that Kneller Athletic Center be set up as it is on game days.

“He was always doing what he was supposed to be doing; his was leadership by example,” Ginnity said. “It hit me a long time ago how Pat did the right thing. I remember thinking he made it look so easy and it made me wonder why doing the right thing didn’t come as easy to me.

“Days like this, his birthday, is a day to reflect on all the positives about Pat, and there were a lot,” Ginnity said. “Pat was always smiling. He was always happy to see you. He put you at ease with that smile of his; he made you feel comfortable.”

Ginnity said that as the cancer grew worse Pat’s focus became singular – he was worried about his family. 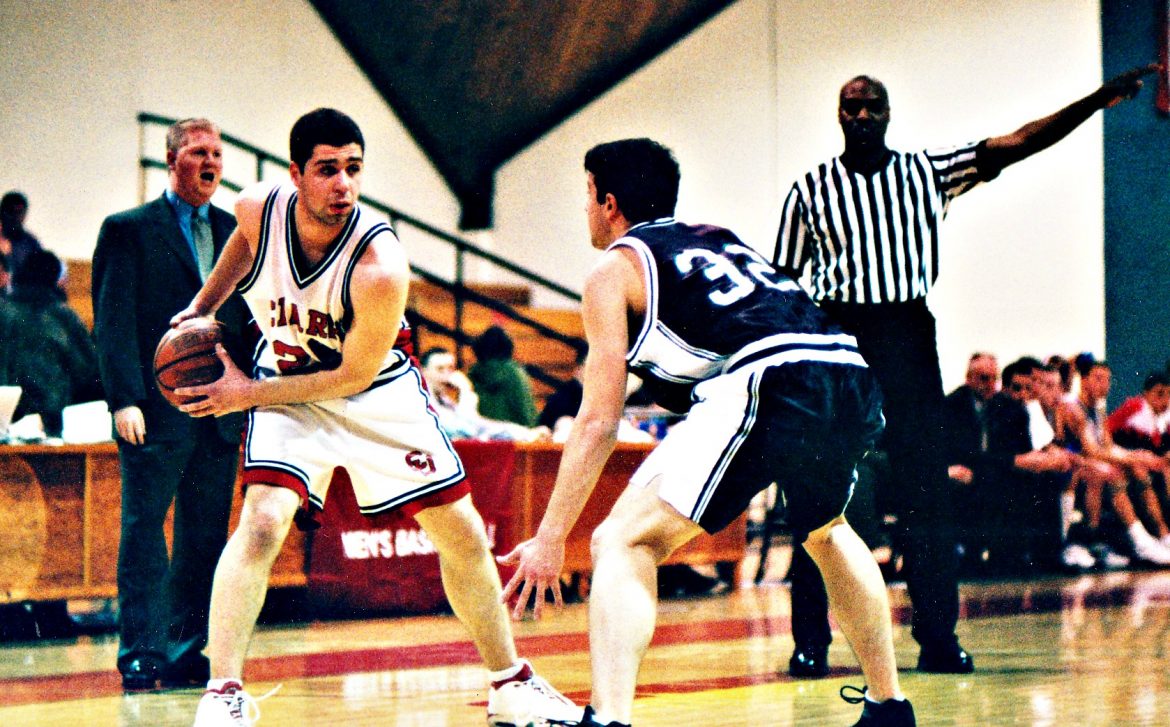 Pat, during his playing days for the Cougars

“There were a lot of times, especially toward the end, that he apologized to me and apologized that I had to go through this,” Courtney said. “He was sad that he was going to miss seeing the kids (Allison, 3-½, and 1-year-old Ryan) grow up. We talked about what I was going to say to Allie and how I was going to explain it.”

Before Pat Oroszko passed away he made a video for each of his kids and he wrote letters to them, letters that are not to be opened or read until the day they finish eighth grade.

“He wanted to make sure there was something for them to remember him by,” Courtney said.

Pat’s death came just days before his son’s first birthday, a week before his five-year wedding anniversary, two weeks before Father’s Day, and 38 days before his own birthday. Tough days, to be sure, for those who loved him.

“Every day is tough,” said Chris Oroszko, Pat’s older brother. “I’m not sure one day is really necessarily any tougher than another. On these milestones you tend to hear from more people, so it brings up the thoughts and feelings a little more. When I think about him I try to think about the good stuff, the happy stuff.”

Chris said that on one level he understands his brother is gone, but on another, well, that will take more time.

“This whole experience is like nothing I’ve ever gone through before,” he said. “I’ve learned to live with the fact that I don’t know what to expect. I never know what’s going to happen or how I’m going to feel. I’m just trying to take everything as it comes.  I think of him all the time.”

As the end drew near for his brother, Chris tried to give his brother some peace of mind. 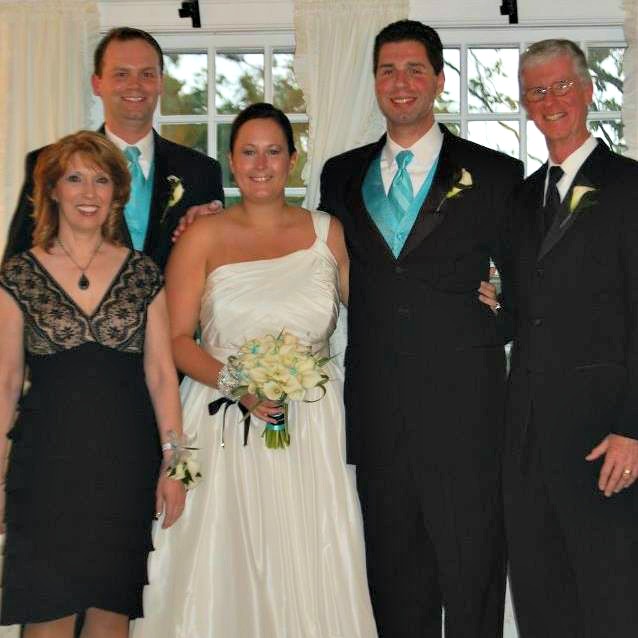 “If it was time, I just wanted him to feel as comfortable as possible about going. It wasn’t a long conversation, it was just kind of a very quiet acknowledgement. He knew what I was saying. I didn’t want to drag it out and make it a big, sad moment, I just wanted him to know if this is going to be it at this time, you can go, it will be OK.”

Courtney said during her husband’s entire illness, there was one thing he never said.

“He never in seven months said, ‘Why me?’ He never complained. One time, right at the end we were there for chemo and we found out that (the cancer) had spread and he said, ‘I just don’t feel like doing this today.’ But never once did he say, ‘Why me?’

Courtney made one final request to her husband the day he died. Well, two actually.

“I think he knew it was going to be the end,” she said. “So we said goodbye throughout the day. My mom had passed away a few years ago and at one point I said to him, ‘Please say hi to my mom for me and please give me a sign that you’re OK.’ ”

The next day, turtle sightings seemed like they reached an all-time high.

“I think that was his way of telling me he was OK,” Courtney said. “I know it’s crazy, but I said that to him and, literally, the next morning people started seeing turtles. I haven’t seen a turtle in years and all of a sudden they’re everywhere.”

“In my first-period class that Monday, after getting the news on Sunday night, I took my class aside and talked to them about how important relationships are. I told the kids not to burn bridges but to cultivate relationships. I was talking about Pat, but I never mentioned his nickname was ‘Turtle.’

“At the end of that class, we were playing disc golf, a kid comes up with one of the Frisbees we were using and there is a live snapping turtle sitting on the Frisbee,” Corazzini said.

“The next day, on a nature walk with my class on a bike trail between Marlborough and Hudson, a student comes running up to me to tell me how they spotted a turtle on the side of the bike trail. He brings me to the spot and just sitting there is the biggest turtle I ever saw. I took a picture of it and posted it online,” Corazzini said. “Two turtle sightings in the two days after Pat passed away. That’s no coincidence, that’s Pat telling us he was OK.” 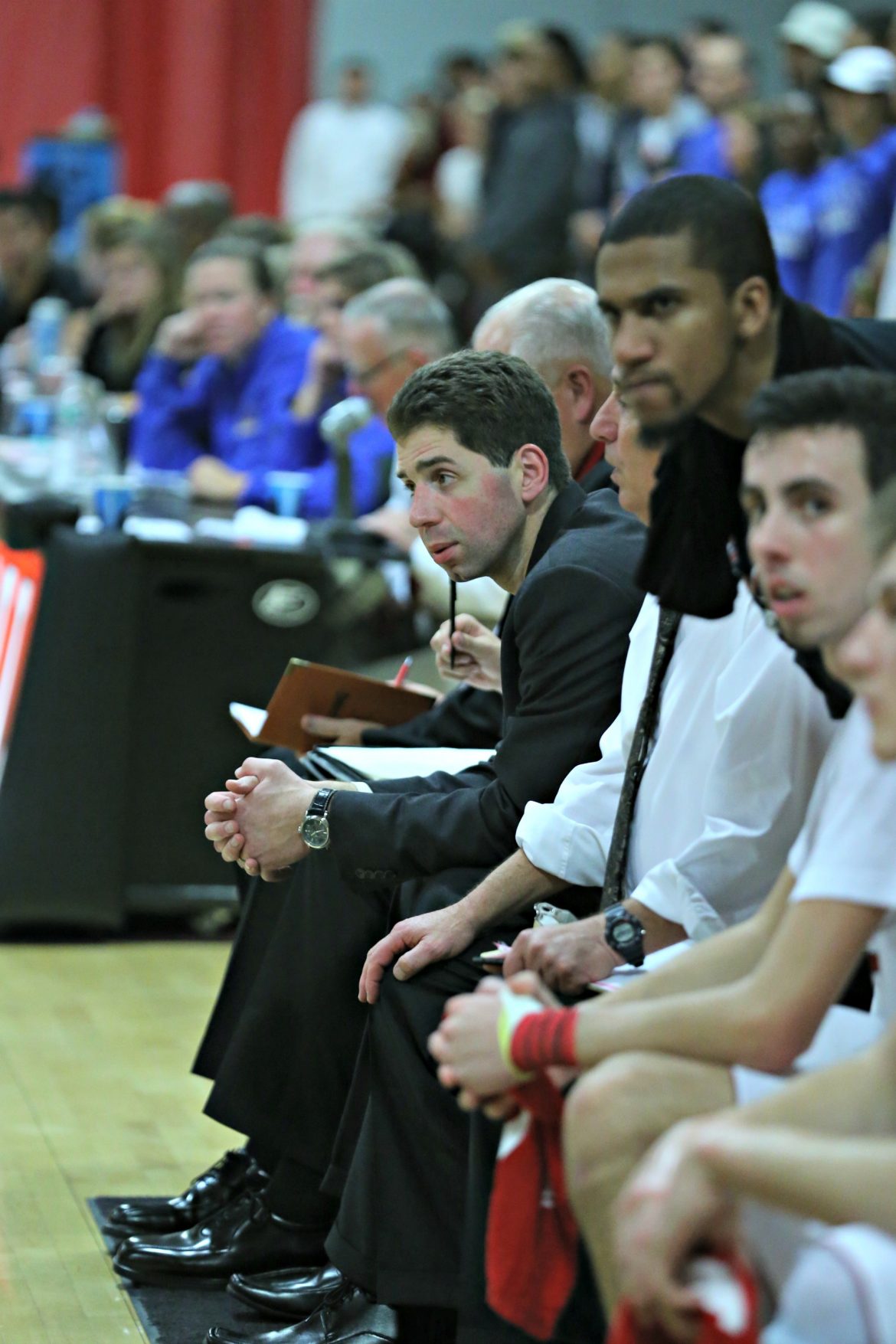 After he was finished on the court, Pat was an assistant men’s basketball coach and administrator at Clark.

Pat Oroszko got the “Turtle” nickname from his coach at Clark, Paul Phillips. It wasn’t a compliment.

“Pat wasn’t the fastest guy on the team,” Chris said. “One day in practice, Coach Phillips yelled at him during practice, ‘You’re moving like a turtle,’ and it stuck. I don’t think Pat liked it when Coach Phillips called him that because he knew why he was calling him that, but everyone around campus just started calling him Turtle.”

Ginnity points out that the nickname is not a complete negative for Pat.

“Turtle is a nickname that fit him well, actually, and not just because of his lack of foot speed – it was on point, certainly, in that regard,” he said. “But Pat was efficient. Turtles get things done and they do it in their own way, like winning at the end of the story about the tortoise and the hare.

“There are often a lot of meanings to a nickname, but Turtle would roll his eyes when someone called him that because he thought they were always referring to his foot speed,” Ginnity added. “And maybe over the 94 feet of a basketball court he wasn’t the fastest, but, five feet from the basket with his back to basket, there weren’t many players with better feet than Turtle.

“His footwork was deadly. It was second to none. It was Kevin McHale-esque,” Ginnity said.

Courtney said she and a few friends plan to get turtle tattoos with the No. 25 on them – the number Pat wore at Clark. While the man may be gone, the nickname will persevere.

Chris said he will always remember the effect his brother had on others.

“He was an example for others, and I think people looked up to him, for sure,” Chris said. “This isn’t something I’m going to get over. It’s not something that’s ever going to be OK and my life is forever changed, but at least I can take some comfort in hearing that although his life was way too short he got a lot done and he did it really well.

“It’s nice when that gets reflected by people when they talk about Pat,” he said.

As noted in Patrick Oroszko’s obituary, donations may be made in his memory to the Center for Esophageal and Gastric Cancer, c/o Dana-Farber Cancer Institute, 450 Brookline Ave., Boston, MA 02215.