The wedding was over and joy was overwhelming. I was not familiar with living with someone full-time, sharing money, always being transparent with one another. Father Pius had instructed us well, though.

We remember those who thought we should not marry and that I would leave Theresa before long. 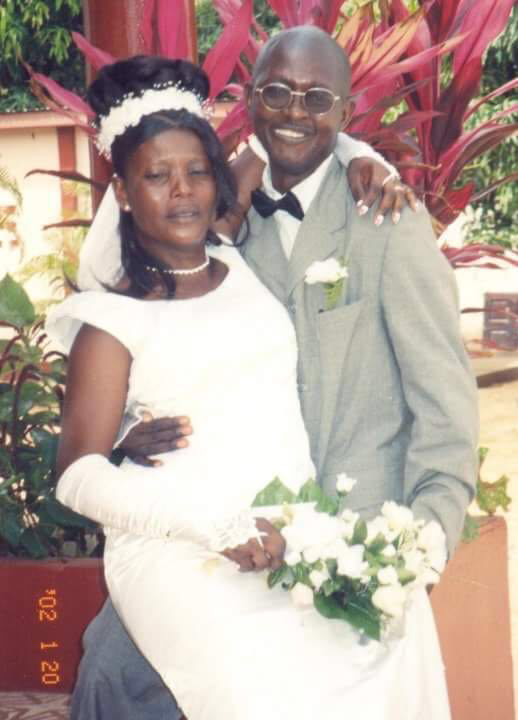 Augustine and Theresa at their wedding

I have a strong will and a forgiving heart for those who love me. It is the same I have exercised to see our love grow. There was no support any longer from her sisters in the U.K. All we gained was by our own hard work. Life became better, and we often played loud music from one of our wedding gifts.

There was a long waiting list, though, for assistance from God. Resettlement prospects for Sierra Leonean refugees had dwindled. Hopes for many a Sierra Leonean had been dashed, but for some they still burned brightly like a new moon or an early morning sun. I was caught in another dilemma from the word go: How would I develop my family life while trying to escape The Gambia for another country?

Thinking and feeling like a newly married man, I thought maybe I was finally free from police harassment related to my journalism work. Yet the secret service and police were still hunting me.

Read Augustine’s last installment, A Wedding Without Parents, or scroll down to follow his incredible journey from the beginning.

I decided to be home very early each day, about 4:30 p.m. I should have been home playing with my daughter Mary, who was a source of courage for me. I had to be very careful or risk leaving her behind.

In the midst of a new reality, though, I could not always focus on her. Gambia being Gambia, full of hypocrisy and hate, I had suffered at the hands of those who acted as though I was their best friend but who kept me at bay while others received help. It was very hard to survive because of this.

Thinking the situation might change for the better was only a figment of my imagination. This new beginning was not without trouble. I was a giant within, however; nothing bothered me deep down.

The tempo at my work changed. Some were happy but some had different feelings. The Point newspaper was very popular and was under government surveillance. Our boss, Deyda Hydara, had been killed in cold blood in 2004. We used his photo on one of our wedding favors, a T-shirt that was nearly forbidden to wear. Wearing it felt as if you were not supporting the government.

We loved him. He was a mentor and a dad who directed me in every aspect of the job and guided me. I was not afraid to wear his T-shirt after all. I got a couple of challenges from people in a taxi or somewhere.

My editors did not seem to support me, while helping other reporters make contacts and sometimes paying transportation refunds. But I was smarter than ever. I made my own contacts and got solid news items for the public. They wondered how I did my thing, but going without their support made me very strong. They always waited for my news for the next publication. I felt I was surely a star among them.

After the death of Deyda Hydara, the Point newspaper grew even stronger with journalists from all over The Gambia wanting to sacrifice to make it strong again. Among the reporters there were some who did not want to see me excel, but my reports reached far and wide. Everyone looked at me with scorn, but my news was solid.

One story in particular came when the Iranian government sent a convoy from their undercover embassy in Banjul. They had a secret meeting with top military officials at Cape Point, and reporters were selected from the government-run newspapers — not to publish, but to attend. I was lucky to be among those who managed an invitation. I got photos of the occasion against their wishes, but escaped easily after it all. My report was bought by other news media from outside the country. It was a big story for Westerners: President Yahya Jammeh had denied ties with the Iranian government but they had an arms deal and military pact.

The news brought me money for my house. Despite the troubles, it was a good year and our life had changed for the better. My wife’s family continued to disapprove from afar, but I did not care — they never fed me. Many thought I was only enjoying from what they sent for their daughter and sister. I know I never sat relaxing to be fed. I tried hard to get money for my family.

I was quite happy that our marriage was sealed. No man could put that asunder.

It was a young woman who posed the latest challenge. A priest friend of mine, Father Carl, persuaded me to bring my oldest daughter, Alice, into our home. 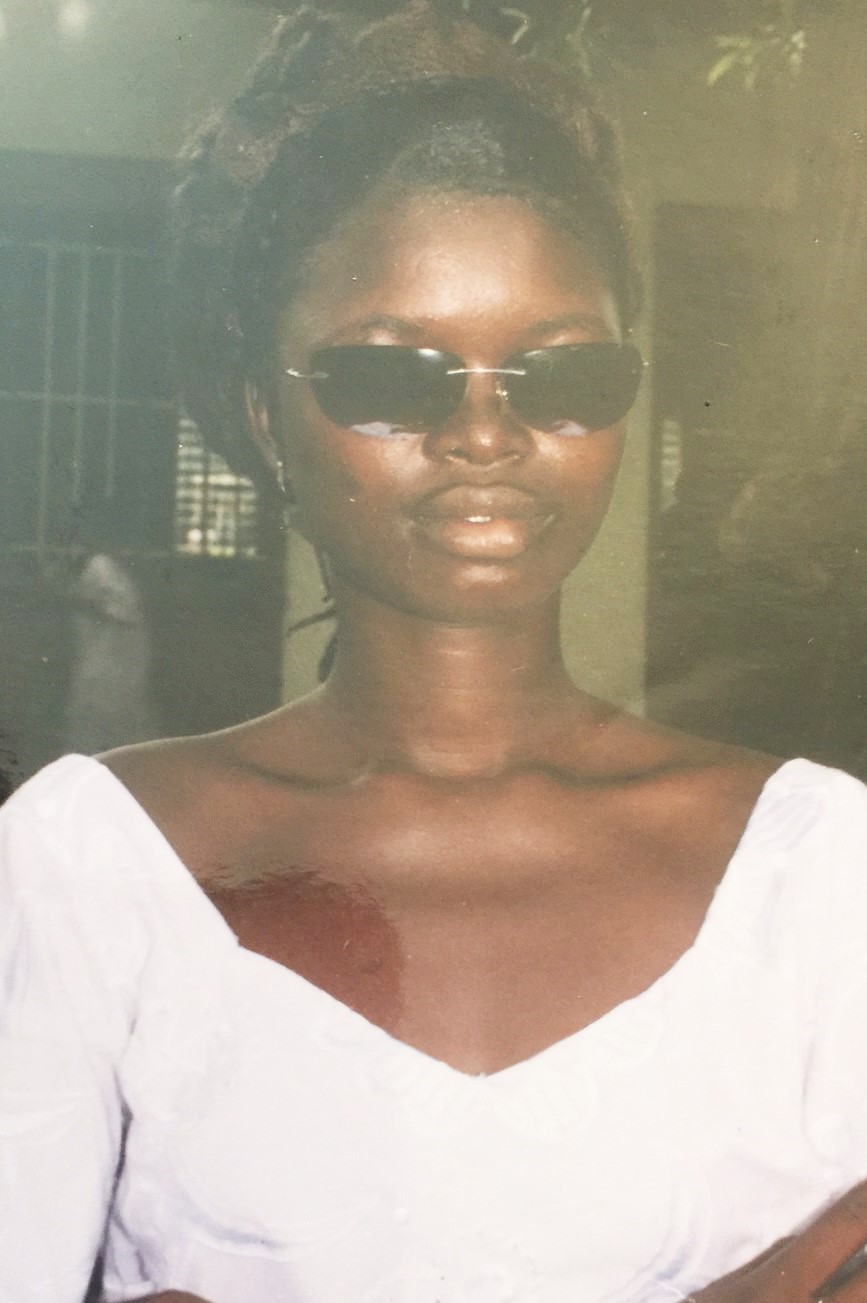 She had come from Sierra Leone after the war. It was her mother who sent her to me. She was my daughter by mistake, not by plan. As a young man, I had made love with a woman called Baby. She had left when she felt pregnant and I did not see her in ages. Alice was 16 years old when I first saw her. Theresa could not believe Alice was mine. But she looks quite like me.

We were all happy about the idea, accepting Alice into our home. With her lack of discipline from the many houses she had lived in, I was delighted that she would be able to learn from us, especially her sister and brother. I was quite happy. My wife’s family, of course, warned Theresa that there was more of this to come. I did not mind them. After all, they too had children, with different surnames, before they got married.

Our house had seen many new beginnings, but Alice was different. Her attitude was disappointing. She refused going to school, saying she had already completed her 12th grade. I had made arrangements and got her into a good school in Banjul, but she said school was backwards. The uniform I bought for her, she made it into a beautiful dress that she wore when she went out. Challenges abounded.

Many thought I needed to wash off my bad luck. I did not succumb to that belief. No man was born to find it easy in life. Some suffer till they die. Others only survive on the margins, while others die in the battlefield and the rest in their beds.

I had been writing about and publishing the activities of the United Nations High Commissioner for Refugees. Sierra Leonean refugees were anxious for information as much as they were to leave. It seemed there was nothing to protect us from the brutality of the citizens.

The lines were quite long while registering with the refugee agency. Many a time refugees stood in the sun and rain for nothing. The place was muddy. Police were scattered to pay homage to the country. Some people stayed there the whole day without registering. I was going to be registered, but not as a refugee — as a journalist.

My wife hated us not getting registered as refugees. She hoped someday soon the refugee issue would be solved. Rumors of joy that became unfulfilled made some people go mad or return to the brutal country due to their lack of choices.

I wondered: How do I penetrate this system so that they will know that I have a very sad story? My reporting went viral as I made more headlines.

There was a way out, provided those suffering would stop to talk about others.