First-generation immigrants are one of the fastest-growing demographics in Massachusetts, with more than 15 percent of the Bay State population born abroad, according to the latest census data.

Worcester alone houses more than 40,000 foreign-born Americans, and Central Mass. as a region has seen a large uptick in immigration from South Asia, the Middle East and Africa. Each of these communities has found unique ways to retain their identities and remember their homeland. 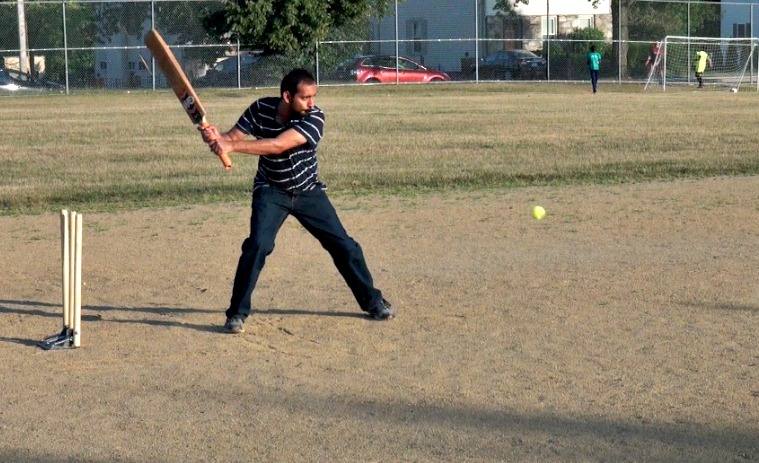 The Willow Geeks, who use Holmes Field on Plantation Street as their home grounds, are one of more than 20 local teams that compete in the New England Cricket Association (NECA) league and tournament every year. The entire team is composed of first-generation immigrants from South Asia, mostly India, and ranges in age from 20-something students to 40-something professionals.

The team practices three or four times a week and plays a match each weekend, making the Willow Geeks one of the more dedicated groups of weekend warriors in the region. It’s that commitment that drew Parasu Raman of Northborough to the Geeks, after previously playing for the Marlborough Cricket Club. 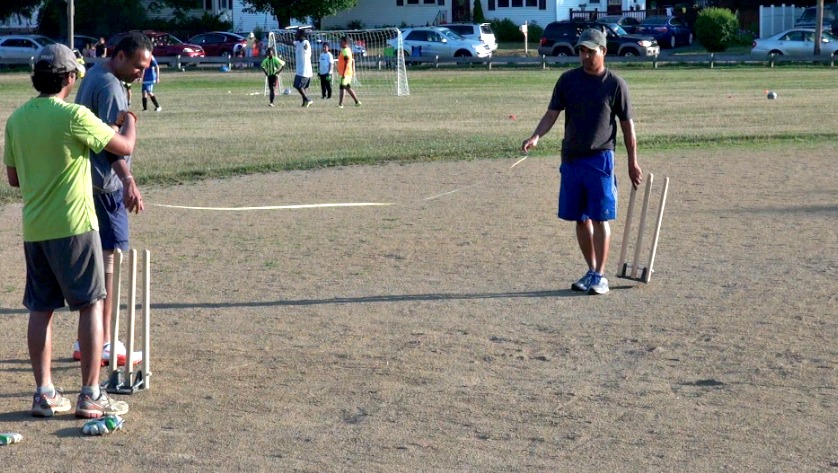 Parasu Raman, right, and Govind Mudumbai measure the pitch to place wickets — from third base to second on a traditional baseball field.

“I had to drop from my other team because we weren’t playing very well,” Raman said with a laugh. “These guys (the Willow Geeks) won a different tournament last year. This is a pretty good team. … Last year (in Marlborough) nobody really came out for the practices, they just sort of played for fun.”

Coming out for training isn’t a problem for the Willow Geeks, who practice batting, bowling and fielding multiple times during the workweek. Starting at about 6:30 p.m., you can usually find the Geeks setting up wickets and playing until the sun comes down at Holmes Field.

The team uses the clay infield of the field’s baseball diamond, and the bowler (cricket’s equivalent of a pitcher) will throw from second base to the batter standing near third base.

The Geeks play in a hard tennis ball league, mostly because actual cricket balls are hard to come by in the States, and that ball can fly in any direction once the batter makes contact. In a game scenario, the batsman will run across the pitch after making contact. If he can make it all the way across, his team is awarded a run, and if the fielders are unable to immediately retrieve and throw the ball back in, the batsman can score multiple runs by crossing the pitch again. 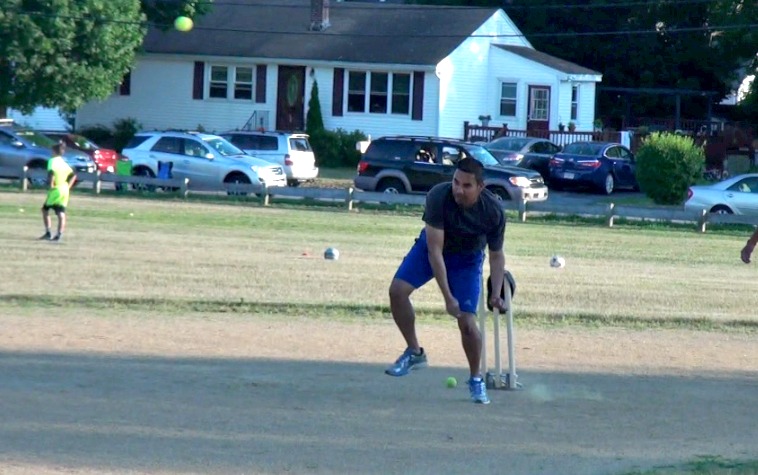 While most Americans vaguely understand the rules of cricket as similar to baseball, the game is second-nature to many immigrants from India, Pakistan and Sri Lanka, and serves as a thread tying them back to their former home.

Shringarpure is the team’s youngest member, and actually drives in from Westford, where he’s interning at St. Jude Children’s Research Hospital. While he doesn’t know if he’ll remain in America beyond his two-year studies at Rochester Institute of Technology, he does admit that having cricket has made him feel more at home in the Northeast. 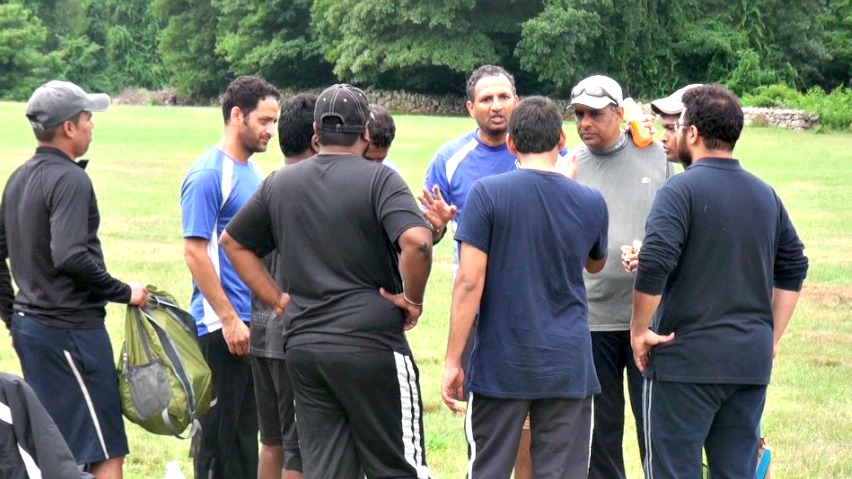 The Willow Geeks huddle during a recent game at Holmes Field.

That desire to feel at home motivated Aravind Kotikannyadanam, one of the club’s founding members, to form the team back in 2007. Kotikannyadanam started the team with several work friends from UMass Memorial, then moved back to India several years later. Kotikannyadanam returned to UMass and the team this year, though his family remains in India for the time being.

“In India, cricket is like baseball or football here,” Kotikannyadanam said. “Kids get into cricket when they’re like five or six, so my son is eight and he’s already into cricket (back in India). … I hope to bring him over next year, but this academic year I couldn’t bring him.

“Even before I came back (to America), I was in constant contact with the team, and you can follow the games online now, which is pretty neat.”

While the format of the game has changed since Kotikannyadanam left, shortening drastically, the way the league uses technology has changed even more. NECA now has its own app, which features live scoring, player stats, team rosters, game venues and constantly updated standings. You can also access all the app’s information on the league’s website.

During games, players from each team can update, by the ball, what is happening for anyone with the app to see. Raman, who (as of July 22) ranks fifth in the league in bowling, controlled the live stats during part of the Geeks’ come-from-behind win over the NECA Lions earlier this month.

“The guys who are running this tournament are from MathWorks in Natick,” Raman said. “Those guys manage the finances and the app.” 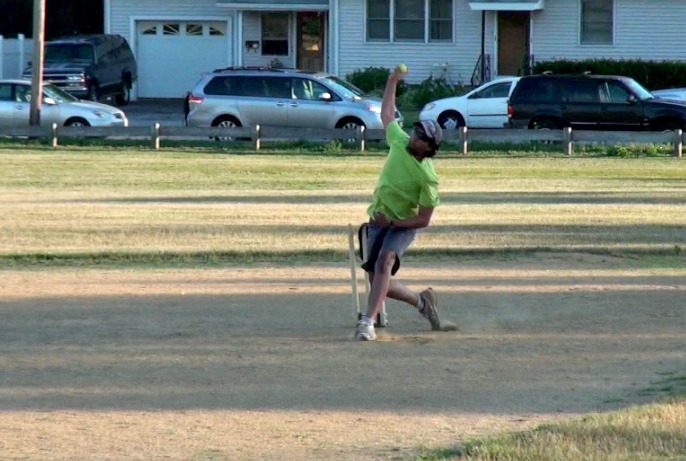 Govind Mudumbai is one of the elder statesman of the Willow Geeks.

Govind Mudumbai has been a member of the Geeks for more than five years, but has been playing cricket in the States since his days as a grad student at Northeastern in 2007. When he left the city and moved to the suburbs, Mudumbai sought out a cricket club, and found the Geeks, then playing in Shrewsbury, through his roommate.

Now living in Stow, Mudumbai has cricket clubs closer to home, but still makes the half-hour trip multiple times a week to Worcester for practices and games.

“There are a few teams near me in Acton and Maynard, but I’ve been playing with this team forever,” Mudumbai said. “It’s neat because every year we get a ton of new players. This year almost everybody is new; there are only three of us veterans. … Many players move around in the country, and then each year we find new people — a lot of recent college grads looking for a team and community.”

The league also practices and plays in the city at Green Hill, East and Crompton parks, and nearby at fields in Shrewsbury and Grafton. Other teams with home grounds in and around Worcester include the Boston SunRisers, Holmes Strikers, Indian Tigers, Maruti, Panthers, Shaheen XI, Shrewsbury CC and eClinicalWorks. 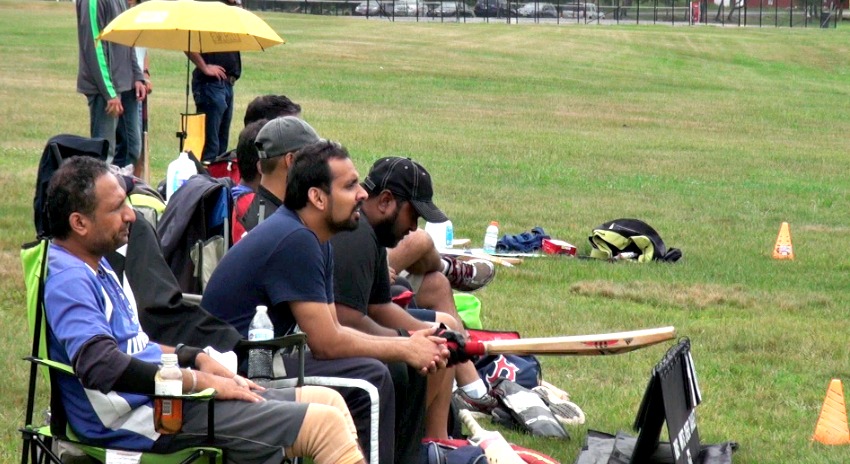 Cricket binds the players not only to their new community, but to their homelands.

The Willow Geeks were 3-2, in the thick of the NECA standings, and will play again today against reigning tournament champion ECC Hoickers. The league’s 11-game regular season goes well into August before tournament play begins.

“These guys are all really great,” Shringarpure said of his first year playing with the club. “They’re great on the field, but also the enthusiasm. That keeps me coming back.”