BOSTON — With an investment of more than $90 million announced Monday, Aug. 15, the state is attempting to disrupt the cycle of poverty and homelessness by generating affordable rental housing units and connecting residents of some of those units to social service providers.

The funding from the Department of Housing and Community Development — more than $31 million in state and federal tax credits, and more than $59 million in subsidies to 26 housing projects across Massachusetts — is expected to generate more than $230 million in private investment, Gov. Charlie Baker said, and will produce or preserve 1,420 rental units, with 1,334 of them designated as affordable housing. The state investments will be made in 16 communities around the state.

In Worcester, according to the state press release, the Union Hill Rental Housing Initiative II is a preservation project sponsored by Oak Hill Community Development Corporation. The project will offer 24 rehabilitated housing units affordable to households earning less than 60 percent of area median income, with five units reserved for households earning less than 30 percent of that threshold. 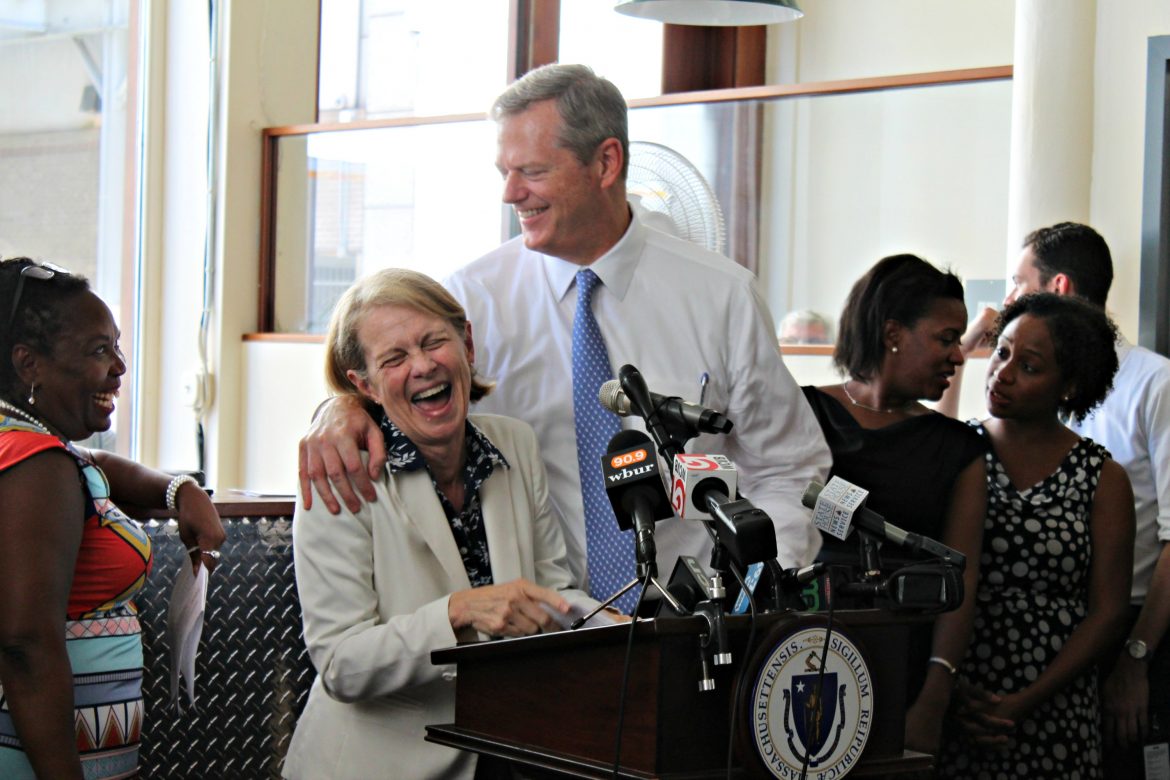 Gov. Charlie Baker jokingly interrupted Sheila Dillon (center), director of the Department of Neighborhood Development for Boston, during her remarks celebrating a rental housing award announcement after she teased that funding “hasn’t come in yet” for the next phase of redevelopment of 48 Boylston St.

“We’re building more inclusive communities, providing pathways to better economic and social opportunities for working families, individuals and our most vulnerable to reach stability and end cycles of generational poverty and homelessness,” Baker said Monday afternoon at an announcement event at 48 Boylston St. in Boston.

Once the home of the Boston Young Men’s Christian Union, the building on Boylston Street is among the projects that received funding. A joint venture between St. Francis House Inc. and the Archdiocese of Boston’s Planning Office for Urban Affairs, the building will be renovated to accommodate 46 “single rooms and small units” to serve homeless individuals earning less than 60 percent of the area median income, according to the Boston Redevelopment Authority.

“It doesn’t just end with providing housing,” said Karen LaFrazia, executive director of St. Francis House. “But to ensure that people not only have a place to live but that they can thrive in their new homes, we understand that it takes partnerships and it takes service. This project is a great example of both.”

Baker said the project reminded him of one he worked on as a cabinet secretary in the 1990s that involved developing housing for the homeless and mentally ill. The governor said a critical component of that project was connecting homeless individuals with the other services they needed, and almost 2,000 people were placed into housing as a result of the project.

“The vast majority of those folks were never homeless again, which I think speaks to the fact that if you put the right kind of program model in place you can help a lot of people over a long period of time,” Baker said.

Sen. Linda Forry, the co-chair of the Joint Committee on Housing, highlighted funding awarded to Boston Home, a Dorchester facility that provides housing and care for adults with multiple sclerosis and other neurological disorders. Forry agreed with Baker that linking housing and services can be a recipe for success.

“This is what is important about today: taking a holistic approach,” Forry, of Dorchester, said. “Not just housing, which is critical and essential for families here in our great commonwealth, but it’s how do we give the supportive services, the social services, that are needed to help our families lift themselves out of poverty or to help middle-income families be able to be successful.”

Baker heaped praise on Housing and Economic Development Secretary Jay Ash and Undersecretary for Housing and Community Development Chrystal Kornegay, both of whom he said bring “on the ground” experience to state government’s affordable housing work.

“In the end if you don’t have people on the ground who really know how to turn an idea, or a policy concept, or a budget into a real project with real possibilities and real opportunity and follow-through, all you have is an idea,” Baker said.

“And one of my great hopes is that over the course of the next several years all of this stuff — all of these great ideas, all of these good intentions — will be turned into real opportunities for people across the commonwealth to get back on their feet and to become productive and purposeful here in Massachusetts.”

Other projects funded in Central Massachusetts are: