It started a month ago. Unnoticed then.

It was noticed on Aug. 26. A photo tweeted by Jennifer Lee Chan of Niner Nation contained the proof. Zoomed in it shows Kaepernick seated between two Gatorade coolers while everyone else stood.

Within a day the player’s protest became national news. He told NFL Media, “I am not going to stand up to show pride in a flag for a country that oppresses black people and people of color,” Kaepernick said.

“I’m going to continue to stand with the people that are being oppressed,” he said. “To me, this is something that has to change. When there’s significant change and I feel that flag represents what it’s supposed to represent, and this country is representing people the way that it’s supposed to, I’ll stand.

“I have great respect for the men and women that have fought for this country. I have family, I have friends that have gone and fought for this country. And they fight for freedom, they fight for the people, they fight for liberty and justice, for everyone. That’s not happening. People are dying in vain because this country isn’t holding their end of the bargain up, as far as giving freedom and justice, liberty to everybody. That’s something that’s not happening. I’ve seen videos, I’ve seen circumstances where men and women that have been in the military have come back and been treated unjustly by the country they fought have for, and have been murdered by the country they fought for, on our land. That’s not right.”

By the time he said that, the backlash over his protest was already at a fever pitch. Denunciations were common and vitriolic. Among them was even a 10-minute video of people burning Kaepernick jerseys.

Then something interesting happened. The backlash had a backlash of its own.

Thirty-five veterans published a letter of support on Sept. 2. Five days later Forbes reported that Kaepernick’s was the top-selling NFL jersey, a position it still holds.

At the same time, others started protesting. In addition to members of numerous other NFL players, college football players, high school football players and U.S. women’s soccer star Megan Rapinoe have engaged in protests of their own.

Which brings us to last Friday night. 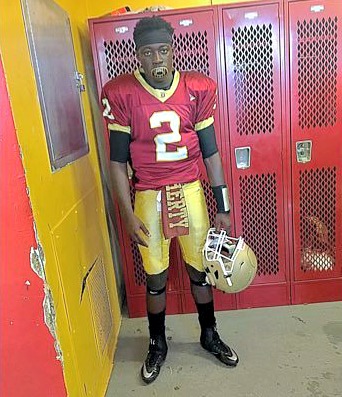 Doherty High running back Michael Oppong took a knee during the anthem before his team’s game against Leominster High at Foley Stadium.

On Sunday afternoon, Oppong tweeted, “My coaches and principals have decided to suspend me for 1 game.”

My coaches and principals have decided to suspend me for 1 game.

The reaction was swift and far more positive than negative.

Talk of a suspension, though, was seemingly the result of a miscommunication.

In an interview with WBZ-AM 1030, Worcester Public Schools Superintendent Maureen F. Binienda said: “The coach had asked him at the game ‘Why did you do that?’ The young man stated that he was going down to tie his shoe. So then, during the weekend, the young man decided he wanted to call the coach and tell him the truth. So he called the coach and said, ‘I wasn’t really going down to tie my shoe, I was doing it as a protest.’ … So they had a couple of conversations during the weekend and the coach said, ‘Be prepared on Monday. You might have to miss one game’.”

Binienda continued, “At no time did an administrator, principal, anybody, tell the young man that he was going to be disciplined.”

“Recently, athletes have displayed silent protest in support of the dialogue on race and equality that continues to evolve in every community across the nation. This weekend, a football player from Doherty Memorial High School knelt down during the National Anthem, joining the many athletes who have silently displayed their opinion.

“The Doherty student did not violate any school rule when he peacefully and silently protested during the National Anthem. He exercised his Constitutional Rights without disturbing the school assembly and he is not being disciplined in any way [for] his actions.

“Worcester Public Schools is a rich, diverse community that thrives to maintain open dialogue about the challenges that our community and our country face.”

It would be nice to report that the matter was concluded. Alas, it is not.

Oppong has received threatening messages, the Telegram & Gazette reported, and Worcester Public Schools have created a safety plan for him.

We lament the speed with which social media enables anonymous fury. At the same time we cannot help but notice and praise how quickly those voices can be properly marginalized by those showing support not only for Oppong but for the protest he undertook.

Moreover, we credit Binienda and Worcester Public Schools for quickly investigating the matter and reaching the proper conclusion in not attempting to suspend Oppong. Her decisive action is not only an object lesson in leadership, it is a valuable lesson to all students about First Amendment rights.