Rejon Taylor-Foster had nowhere to go.

It was May 2014 and Taylor-Foster, a developer, game designer and teenage founder of the digital production studio Maximum Crash, had a problem.

His freshman year at Becker College was over, his home in Mount Vernon, New York, lost to neighborhood gentrification.

His options were limited, his drive was not. His requirements?

“All I needed was a corner and an outlet,” he said. “If I am able to get the tech, I can do the job because my skills are intact. I still have my computer. If I can get power, and I can connect to people, I can do more.” 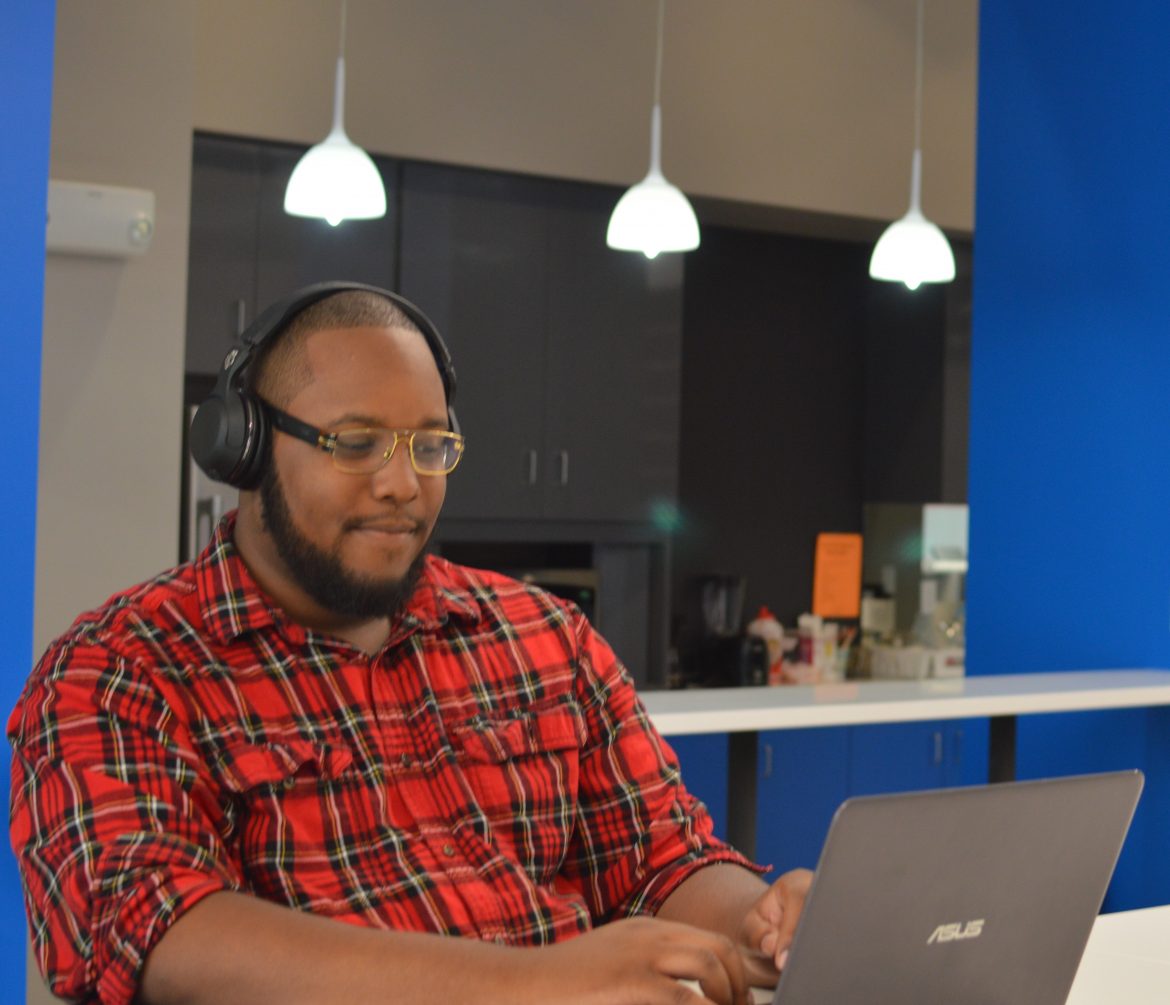 Credit the family of Taylor-Foster’s friend Jeff Reiner for providing the corner, the outlet and an air mattress at their home in Burlington. Taylor-Foster took care of the rest.

Coding, or programming, was not just a way to make money. It is a way for Taylor-Foster to improve his skills, which are considerable, to create a better life.

Those skills are on display most notably in Bravehearts Derby, an app developed for the Worcester Bravehearts. Taylor-Foster created the original game upon which it is based and led a team of enterprising students in creating a slick, enhanced version for the city’s hometown team.

Those skills were encouraged by a mother who put the idea of being an engineer in Taylor-Foster’s head. “I want to make video games because they’re fun and I enjoy them. I’ve been designing games since I was a kid: sketches, levels, the little things kids do when they’re coming up with their own type of, like, comic book ideas, or video games.”

To move from sketches to computer, Taylor-Foster needed to learn how to code in high school. “I took myself to Barnes & Noble, and given that I didn’t have the money to spend $90-plus dollars on a C++ book and they weren’t offering any classes on technology in my city, I would go to Barnes & Noble after school and read through the book and take notes. That is how I got into programming.”

He started developing his first game during his senior year of high school. His interest in game design put him on Becker’s radar.

“Becker came to me and said, ‘Hey, you are doing well in school and doing well making games. Why don’t you come here?’ ”

Taylor-Foster got a taste of success in his freshman year when he and friends Benny Rodriguez and Austin Campbell designed Paracentric, a role-playing game, during Becker’s 24-hour Game Jam. To their surprise, the game was downloaded 400 times.

While going to school and working, Taylor-Foster kept developing on his own. “I wanted to keep making stuff. As a developer, the only way I can get better is with experience. I wanted to be a developer now, so I have to do the work now. So while I am going to class and while I was going to work to pay the bills I was also developing video games.”

As a sophomore, he developed F Mode in just three hours. It made $70 when he released it for PCs. “I said, ‘Wow, if this is what I can do in three hours, what can I do in one hour, or one day? So I started to test myself.’ ” He spent a week converting it for handheld devices and picked up another 300 downloads and a four-star rating.

Buoyed by the success of F Mode, Taylor-Foster started a new project the very next day. Little did he know the impact the project would have on his life. 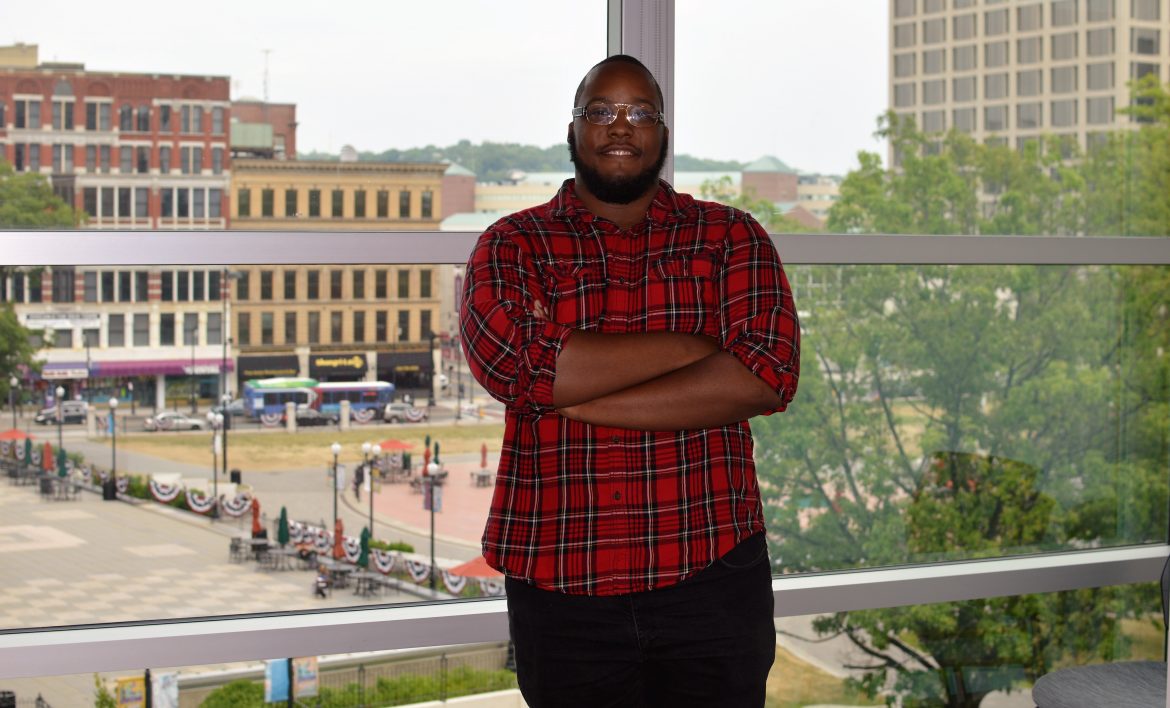 “Baseball games to me weren’t that fun,” he said. “I need to create an experience that can be enjoyed by both fans of games and fans not of games. So baseball is perfect because it is a game and people who do not like games, like baseball. That’s the gist, baseball, on a mobile platform. Period.”

The game was Starlot Derby. The name? He liked home run derbies, baseball fields are sandlots, and everyone wants to be an all-star.

He finished the game, showed it to his professors and was introduced to Monty Sharma of the Mass. Digital Games Institute [MassDiGI] at Becker College.

“It was impressive for a sophomore,” said Sharma, who suggested entering the game in the MassDiGI Challenge, its annual game challenge in Cambridge.

Taylor-Foster continued developing the game while working the 7 p.m.-4 a.m. shift at Domino’s and going to class at 7 a.m.

He finished the PowerPoint presentation at 3 a.m. the morning of the challenge and boarded a bus to Boston. A one-man band in an environment in which most games are pitched by teams of up to five people, Taylor-Foster tried to be realistic about his chances.

“I don’t know how to explain my game yet, but I have to pitch it to these professionals,” he said, thinking, “Let’s do this and get it over with.”

“I presented the whole thing and people loved it. I was astonished. To a certain extent, I was a ghost. I was sitting in darkness for a very long time. I had four, five friends supporting me, which was great. Now I have this exposure and all these people know me.”

Exposure aside, the win earned him a spot in MassDiGI’s Summer Innovation Program last year at Becker to work with some of the most talented game designers in the country. And, yeah, he now had a place to stay.

The team on which Taylor-Foster was placed went on to produce Hibachi Hero, a game one reviewer wrote is “addicting as all hell.”

It was during the summer program that Timothy Loew, founder and executive director of MassDiGI, brought in Bravehearts General Manager Dave Peterson and mascot Jake the Lion. The goal of the meeting was to come up with an idea for an app the Bravehearts could use to interact with their fans.

“I had known about the program at Becker,” Peterson said, “and Tim Loew reached out to me and said ‘Hey, we have a great opportunity for you to come in with the mascot, and talk to MassDiGI about what the baseball team is and what the baseball team does in the community; and who knows where it’ll take us, but maybe it’ll spark an idea about a potential app.’ ”

It didn’t take long for Loew, Sharma and Taylor-Foster to realize that a new version of Starlot Derby might fit the bill. For Sharma, that meant a quick update of graphics. Taylor-Foster was having none of that.

Taylor-Foster recruited other students in the program for this new side project and started over.

After being in the lab 9-5 for Hibachi Hero, “I would stay until midnight working on Bravehearts Derby. I would go home, and wake up to do it all over again,” Taylor-Foster said.

“It wasn’t a minor art switch, which I thought it would be when I asked for it,” Sharma said. “Rebuilt it from scratch because they wanted to do stuff that they couldn’t do in the tool set they used [for Starlot Derby]. What they built is really slick. It’s really slick.”

In April, Maximum Crash was named a winner of StartUp Worcester, a partnership between the Worcester Regional Chamber of Commerce, Running Start and The Venture Forum.

“It was a win-win for everybody,” Taylor-Foster said. “I get my first contract with Maximum Crash and it’s with a baseball team in Worcester, MassDiGI gets help with representing their community and helping out the community, and the Bravehearts get their game!”

Bravehearts Derby (available for iOS and Android devices) will be on display this week as the Bravehearts host the Futures Collegiate Baseball League All Star Experience Wednesday, July 13. Maximum Crash will be there too. 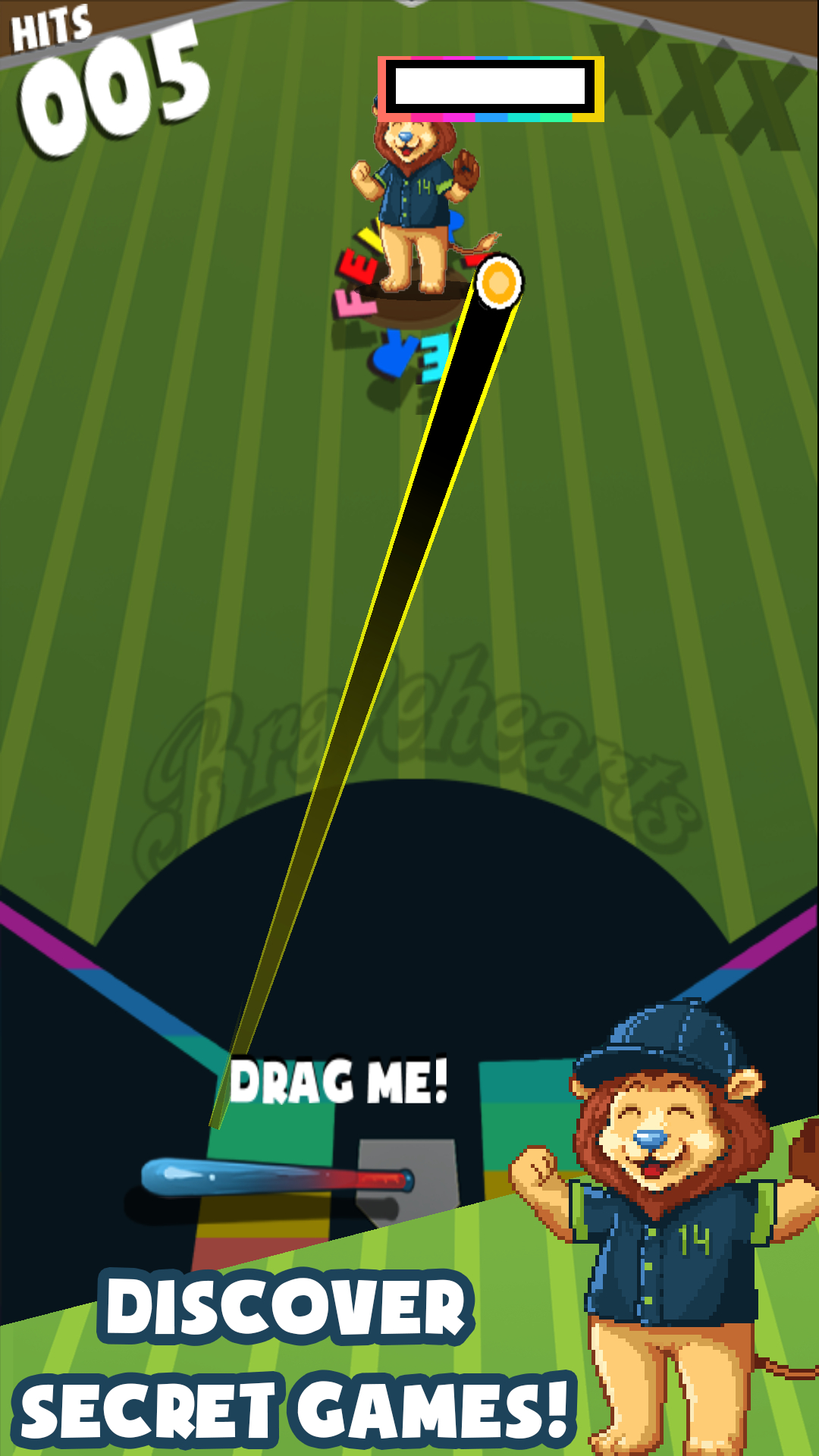 The Bravehearts Derby app has been a hit with fans, GM Dave Peterson said.

As for Taylor-Foster, the name of his company epitomizes his drive. “Maximum Crash, it’s about making the most of the time I have. Tomorrow things could be different. I’m going to make the most out of the time I have and even though 24 hours seems like a lot of time, it’s really not.”

The senior-to-be approaches his time at Becker like “every semester is my last, there is no call for help. That is it, so I am going to do what I do best to do what I can.”

He wants to turn Starlot Derby into a franchise: tennis, hockey, basketball, golf, boxing and bowling. He’s working on a sequel called Starlot Derby 2. All while preparing to go back to school and working as a digital media specialist at Victory Productions in Worcester.

“He’s one of the more driven, smart, young game development students I’ve ever seen,” Loew said. “I don’t when he sleeps. It’s a testament to his abilities that he can balance it all.”

For his part, Sharma thinks Taylor-Foster’s drive is good, to a point.

“He has got more things going on right now than you could just imagine,” he said. “He’s got a full-time job, he’s doing contract work for people, he’s building two games, and he’s on the board of the [Worcester Game Pile]. My last comment to him was ‘Dude, you’re going to break yourself.’ ’Cause I’ve worked hard, I know what it looks like; it’s way past that. He is driven like no other.”

But he sees a bright future for the budding entrepreneur.

“Rejon has the personality,” Sharma said. “He’s going to be an entrepreneur. He’s not going to work for somebody.

“He wants to build an empire. He thinks big, he’s got really big thoughts, and the most impressive part about him is that he does things for the appropriate level of his abilities right now. Most people who have the grand visions that Rejon tends to have, they start with the biggest idea and they get stuck there until they become disappointed and bitter.” 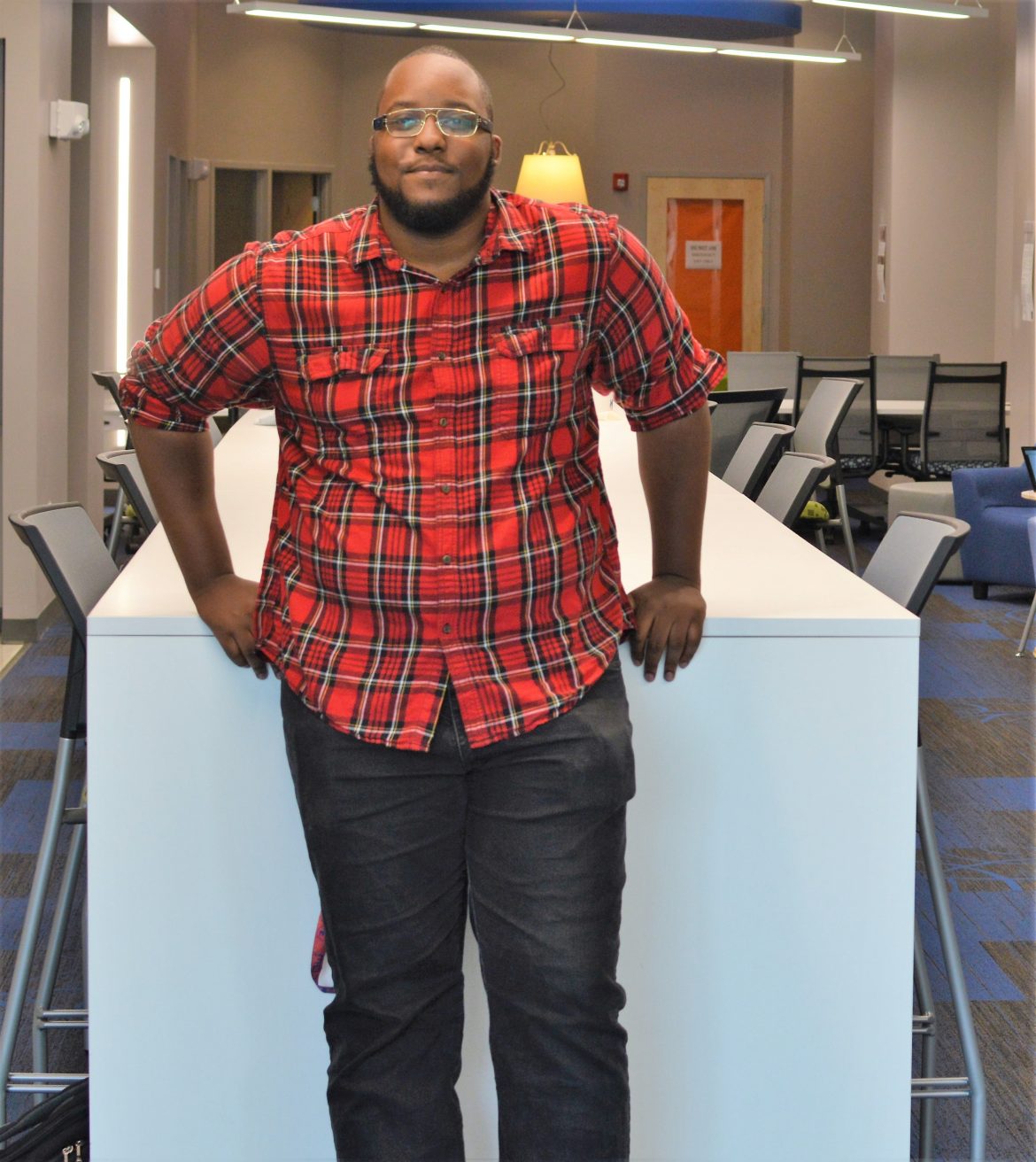 Drive, personality and perspective are the keys to Taylor-Foster’s success.

“I try to stay humble,” he said. “Being humble is super important. I just need to do better, I need to do me, I need to become a better developer, I wanna do good things that don’t stop me.”

“If I was to give advice to somebody coming to Becker right now, it would be start now. Like right now. Any age, anybody. There are so many tools out there, so many free things out there. The world is your oyster.

That’s how you become a 21-year-old game designer developing a bright future.