First in a two-part report chronicling several days in the lives of the Worcester Anti-Foreclosure Team, a nonprofit grassroots organization that advocates and provides support for residents facing eviction and tries to help those people stay in their homes while untangling the often complicated legality of their situations.

It is hot at the Pleasant Street Neighborhood Network Center this particular Wednesday evening amid the arid dog days of summer. An odd fan here and there decorates the room, with an open door onto the street serving as further means to fend off the heavy, humid air late September has left so abruptly behind.

Across the board are names of people who know well that feeling of being left behind. With them are corresponding dates, and a list of items to be covered during this regular meeting of the Worcester Anti-Foreclosure Team, with the agenda quickly moving along, almost as if anticipating something big. Then it comes:

“We’ve been offered to meet with Senator Warren.”

The announcement is made by Grace Ross, chairperson of WAFT’s steering committee, and coordinator and cofounder of Mass Alliance Against Predatory Lending [MAAPL], to which WAFT belongs with more than 70 organizations from unions, to individual lawyers, to the New England Area Council of the NAACP.

Together they are tackling the still-daunting number of foreclosure petitions issued in the state by helping residents find ways to stay in their homes while exhausting all remedies — many archaic, complicated, wrapped in red-tape or difficult to understand for non-English speakers — in the foreclosure process.

Part 2 — The team rallies around an Oak Street family

June, according to a State House News Service report, marked the 28th straight month of year-over-year increases in foreclosure initiations in Massachusetts. Worcester County saw the greatest percentage increase, 48.5 percent between June 2015 (83) and this year (121).

“Basically it’s about enforcing the laws that are on the books,” said Ross, who was recently honored by New England’s NAACP chapter with a lifetime achievement award for her advocacy work.

Putting the team together

Ross founded WAFT in the spring of 2008, starting with educational services and branching out to the group’s more active roles today on the front lines of foreclosure practices.

We spoke in her home, tucked away just off of Worcester City Hall, with Lori Cairns, the chief organizer of the group, and only paid member of the registered 501(c)(3). Cairns carries a calming energy despite spending most of that morning buzzing around the city’s Latin American Festival on the Common, handing out information. 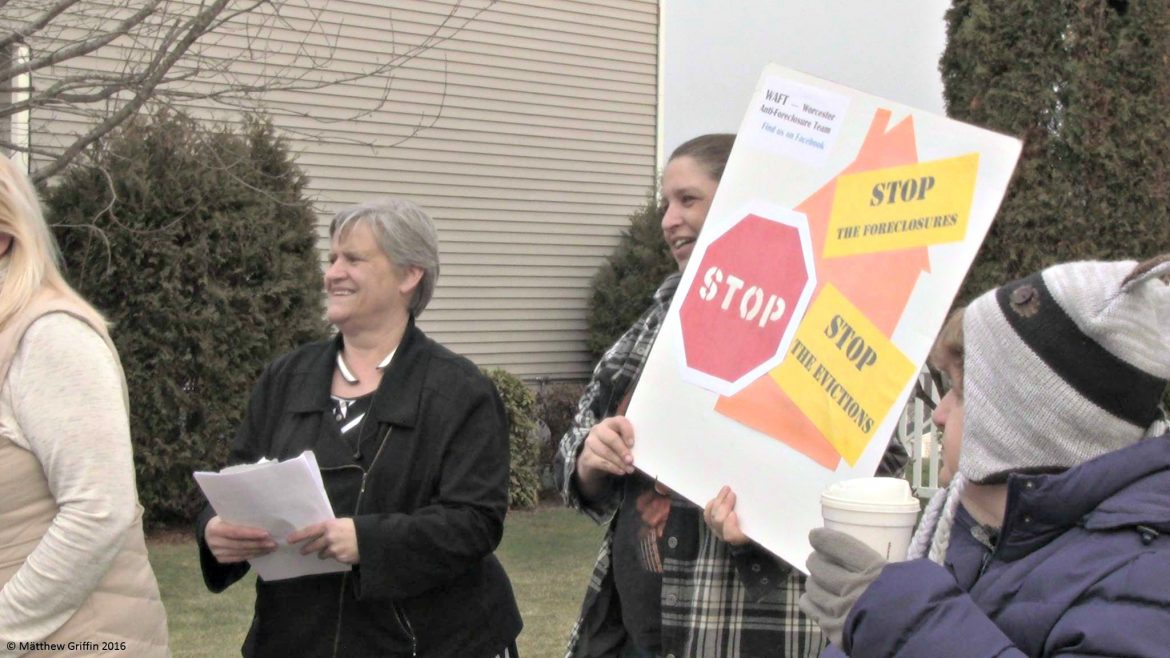 Lori Cairns, left, is among the driving forces for the Worcester Anti-Foreclosure Team.

Ross calls her a born-and-bred organizer. They first collaborated in the 1980s, working on welfare reform with the Coalition for Basic Human Needs.

“I always admired her, and always said if I could work for her, I would,” said Cairns in reflecting on her journey to WAFT, one that ultimately brought her back from California, where she had continued refining her techniques and knowledge of advocacy organization.

Ross pinpoints the first notions of founding what would become WAFT in 2007, as she became exposed to what she calls “bizarre” occurrences in the housing market around foreclosures.

“There was nothing normal; you couldn’t say that was market forces,” said Ross. “What happened was the mortgage companies came along.”

She continued, turning phrases over her tongue with ease; clearly she’s had ample practice speaking on this subject. “There were the secondary cities [in Massachusetts] that were doing a lot better and were making a name for them; they were called gateway communities … and so that’s also where those mortgages targeted their brokers,” Ross said, noting what she and the group feel was even more acute targeting of minority residents in those communities.

A 2008 study from the Federal Reserve Bank of Boston found a “starring role” for subprime mortgage lending in minority neighborhoods, in which the “entire increase in purchases by both black and Hispanic households in Massachusetts over [1998 to 2006] appears to result from the presence of the subprime market.” Foreclosures disproportionately affecting minority communities outpaced those of earlier foreclosure booms.

And with Worcester’s dense minority population — there are about twice as many Hispanic or Latino and black residents in the city compared to the state percentages according to the Census Bureau’s 2010 statistics — the city proved the perfect incubator for the subprime lending-powered housing crisis that would follow.

“The only way you can change an across-the-board injustice like this, is you bring enough people together so that they have to respond to you,” said Ross, leaning over her laptop. “You cannot muster enough hope, enough grassroots expertise, and enough group power to challenge the richest institutions in the world.”

The group has mustered many over the years and boasts about 100 active volunteers, Ross said, most of whom had worked with WAFT in the past due to their individual situations. There are 14 members on the steering committee and nearly two dozen members currently fighting foreclosure with the team’s help.

The members peel through green brochures handed out at every meeting, a collection of directives and pertinent information for those facing foreclosure.

Underlined, and capitalized, one finds “10 Things Tenants and Homeowners Facing Foreclosure Should Know and Do,” a list of advice laced with a deep-rooted skepticism toward bankers and lenders.

Like a SparkNotes guide to housing law in the commonwealth, the list ranges from the simple (“never sign anything that you don’t understand fully”) to the potentially more unapparent (“illegal for your landlord to change your locks”).

At each meeting of WAFT — held on the first, third, and, if possible, fifth Wednesdays of each month — participants run through this list of 10 items. Soon after come the updates. 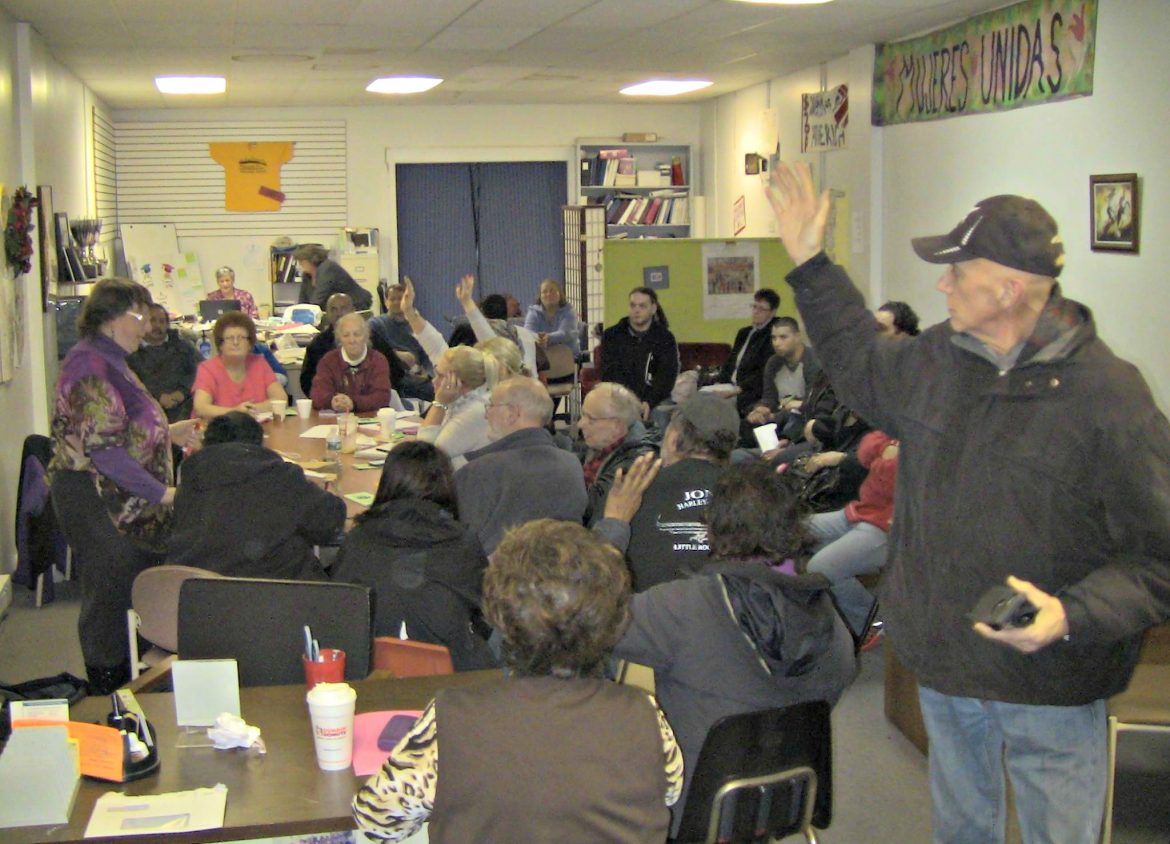 Mirroring what one would expect from a confessional support group setting, veteran members share a brief highlight of their current situation, warming the climate of the room so less ice sits atop the surface of conversation for new arrivals to break. A pattern emerges, as individuals recount roughly the same story, listing their respective banks, the dates of foreclosure, and that they are still in their houses.

With an eruption of applause from fellow members upon this final announcement, the relative notion of mutual support becomes clear. The applause also signals the overall impact that WAFT has on the economic landscape of its members.

Support for the group

While the team and its members find little compassion, and indeed marked scrutiny, in certain corners of the city, it can count a number of public officials on its side. District 4 Councilor Sarai Rivera and state Rep. Mary S. Keefe were lauded by Ross and other members for their attention to the cause. Ross also pointed to Amanda Wilson, the city’s director of the Division of Housing and Health Inspections, for her “fabulous” work.

“Every family needs access to affordable housing, and working to expand that has been one of my top priorities,” McGovern said. “All across Massachusetts there are great community organizations and private sector partners working to help families in need, and I have been proud to help bring federal dollars back to our district to support those efforts.

“This is about supporting strong communities and this will continue to be a priority for me as we work to help more families.”

In addition to his support for grassroots organizations like WAFT and NeighborWorks Home Ownership Center — administered locally as a joint project of the city, Oak Hill Community Development Corporation and other housing and service agencies — McGovern advocates for a number of affordable housing initiatives and groups, such as the Consumer Financial Protection Bureau, which in August updated its rules to require servicers to provide certain borrowers with foreclosure protections more than once over the life of the loan; clarify borrow protections when the servicing of a loan is transferred; and provide loan information to borrowers in bankruptcy.

Back to Elizabeth Warren

“She’s on our side,” says Ross of U.S. Sen. Elizabeth Warren, who on this night would soon be concluding a speech at nearby Clark University.

“They want us there early but they don’t want us to miss her,” Ross added, intimating the interaction will be short and this would be a window unlikely to reopen. The meeting, Ross believes, is an opportunity for the senator to “see the diversity” and “get a few names in her head” around the foreclosure issue.

Still, a slight jolt of electricity buzzes through the group. Compliant with the team’s egalitarian approach, a vote is held on whether to adjourn the meeting and head down Main Street. It’s unanimous, of course. Like sparks to wildlife, the jolt of electricity within the group soon leads to chaos and questions.

For transportation, carpooling is encouraged. For executing a message, signs are agreed upon. 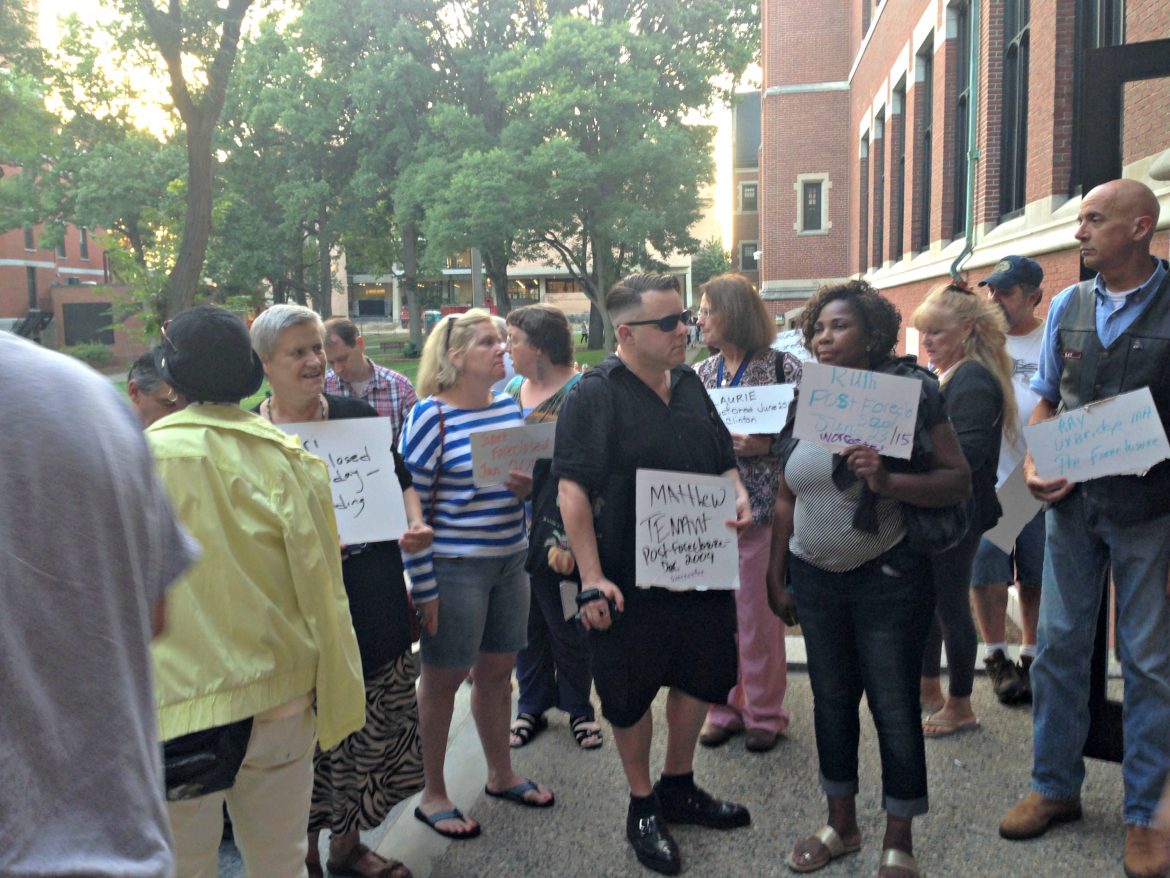 From the steps of Jefferson Hall, it is clear Clark University stands out from its immediate surroundings. Less than a 10-minute drive from the Neighborhood Network Center, the manicured lawns, open green space and lack of noise is stark from where the participants of the Worcester Anti-Foreclosure Team were seated just moments before.

The group members position themselves on the hall steps, poster board in tow. There they write their names, dates of foreclosures, and some their banks.

“She just finished her speech,” Ross relayed to the group about 7:30 p.m. The group paused and waited, with pulsating but quiet conversation amongst themselves. “Some of these people have been in their houses for years,” says a WAFT member, who travels regularly from Quincy to meet with the group.

With the dispersing audience on the steps thinning, the participants shuffle inside, congregating just outside the auditorium with their signs held as Ross dips inside to speak with an unknown coordinator.

“They don’t want the signs,” said Ross in her return. 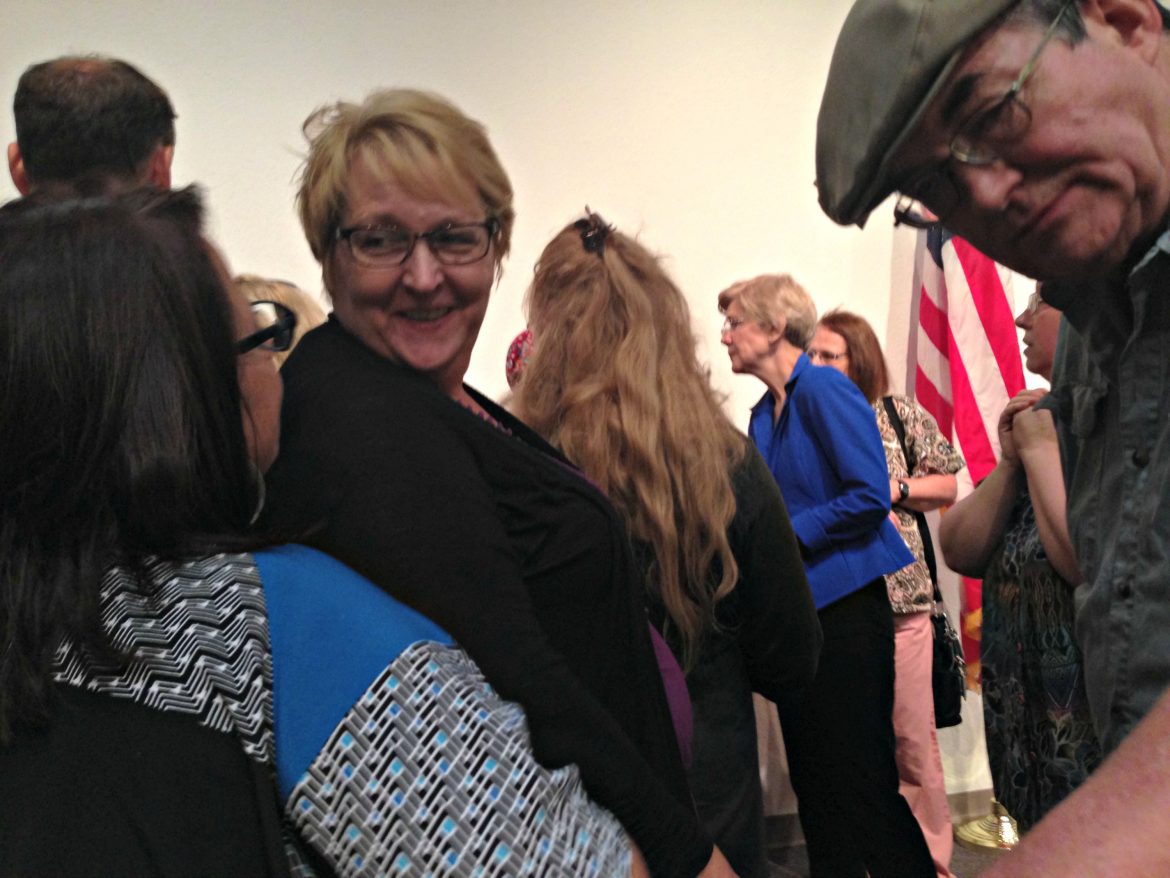 The group passes through into the auditorium, its signs left just beyond the door.

The line of individuals opting to shake hands and take a photo with Senator Warren wraps around the auditorium. Anticipating a long wait, the group finds a row of seats in the back and continues its meeting.

When it is their time, finally, the group members approach Warren together, quickly offering their names and where they’re from, and the names of some the banks they’re fighting. 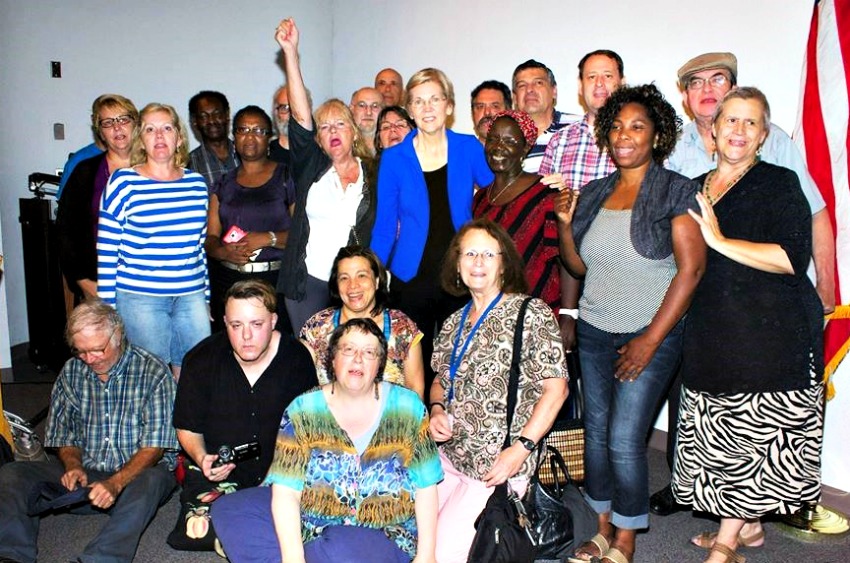 The meeting, as expected, was short, punctuated with nods from the senator, a photo, and a final call, fist raised, for the group to keep fighting. It seemed at least to the members of WAFT that their message had been communicated, and, potentially, that their stories might be carried into the halls of Washington, D.C.

Yet the work of WAFT is rarely done in air-conditioned college halls, well lit and secure, media all around. Instead, they often work and advocate alone beyond their mutual support, much like what would occur on a side street in Worcester days later.

Alex moved to the Worcester area in 2006, and currently divides his time between New York City and Worcester. An avid coffee drinker, Alex can regularly be seen vibrating through Worcester coffee shops. Alex was one of the first contributors to reach out expressing an interest to work with the Sun.