After seven straight months of below-average rainfall, all outdoor water use should be banned in all parts of Massachusetts except for Berkshire County and Cape Cod and the Islands, the state Office of Energy and Environmental Affairs announced last week. 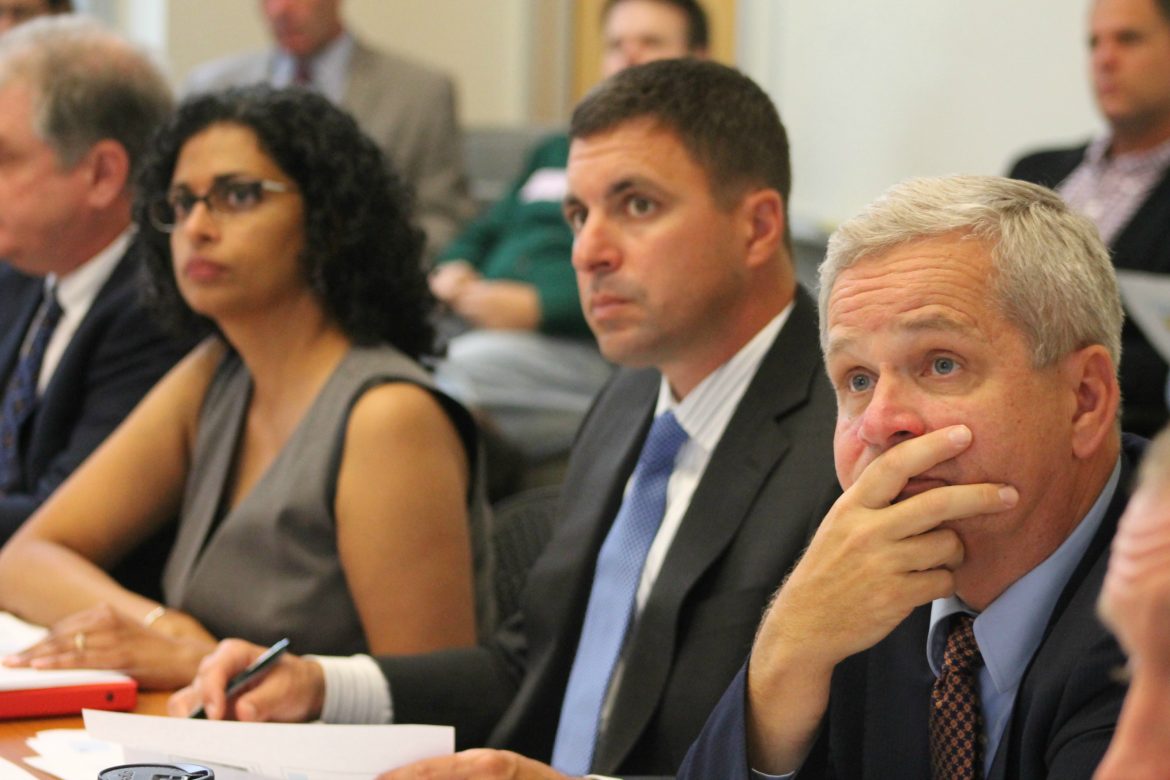 “Water reservoirs, groundwater, streamflow, and soil moisture levels continue to decline, severely impacting the commonwealth’s riverine habitats and fisheries, agricultural sector, and elevating the risk of fire,” Beaton said in a statement. “Now more important than ever, we all must administer best water conservation practices to avoid additional stress on our drinking water sources and other water dependent habitats.”

With each heightened classification, the state ramps up its messaging around water conservation, a stronger push for water-use restrictions, and more intensified monitoring. Water suppliers in regions under a drought warning are urged ban all outdoor water use, and those under a drought watch should limit outdoor water use to handheld watering after 5 p.m. or before 9 a.m., according to the task force. 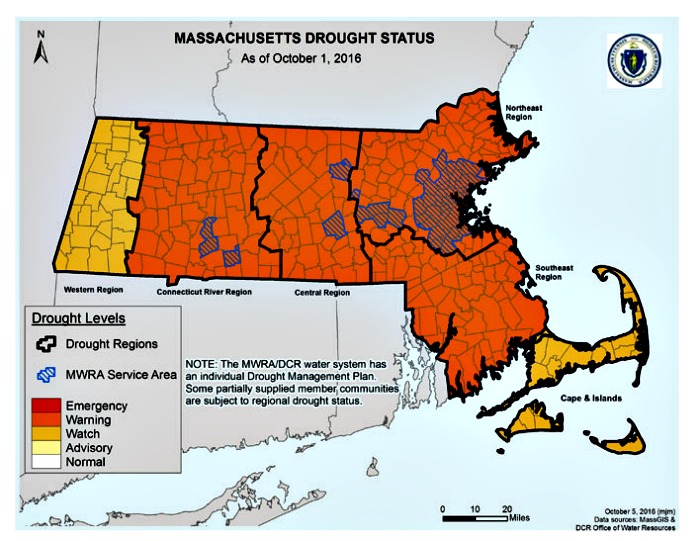 Drought conditions as of Oct. 1

The state has been under its own official drought declaration since July 1. More than 98 percent of the state is experiencing a “moderate” drought or worse, and the remaining bit of the state, near North Adams, is “abnormally dry,” according to the U.S. Drought Monitor.

With Beaton’s latest drought declaration, the drought classifications now are:

Eight years after Massachusetts voted to decriminalize the possession of less than an ounce of marijuana, racial disparities in arrests for marijuana possession have continued, a report from the American Civil Liberties Union of Massachusetts found, and they disproportionately affect African-Americans.

The report, released Oct. 6, found there were 616 marijuana possession arrests in Massachusetts in 2014 and 1,031 arrests for marijuana sales. The report does not say what, if any, other charges those arrested also faced.

The report, which used FBI crime data from 2014, found that the marijuana possession arrest rate for African-Americans was 3.3 times higher than that for white people.

“Racial disparities are a disturbing feature of our current marijuana policy,” ACLU Massachusetts Racial Justice Director Rahsaan Hall said in a statement. “Black people are arrested for marijuana possession at 10 times the rate of white people in some counties — despite the fact Black people and white people use marijuana at the same rate.”

Hall and other supporters of Question 4 — which would legalize, regulate and tax marijuana for adults 21 or older — said that legalizing cannabis could help eliminate some of the racial disparities.

“Taxing and regulating marijuana is an important step towards reducing the harm that current policies cause to people of color, particularly black people, and it will generate hundreds of millions of dollars in tax revenue that can be reinvested in our communities,” Hall said.

Legalization opponents pointed to data from Colorado’s Department of Public Health and Environment that showed that racial disparities have become more pronounced since that state legalized cannabis. A report released in March found that although the number of total marijuana arrests was cut in half, black Coloradans are now arrested for marijuana offenses at nearly three times the rate of white people. Before legalization, black residents were being arrested at just under twice the rate of whites.

“This is a highly misleading report because the Yes on 4 campaign can not tell you whether people were arrested for other serious crimes in conjunction with marijuana charges,” Corey Welford, spokesperson for the Campaign for a Safe and Healthy Massachusetts, said in a statement in response to the ACLU report.

“The marijuana industry has a clear history of targeting poorer and minority neighborhoods. Question 4 is not a solution for any of the racial disparities in our justice system and the only evidence in Colorado is that legalization will make racial disparities worse, not better.”

Also last week, the Massachusetts Public Health Association announced its opposition to the initiative. The association said the ballot question “does not provide sufficient public health protections nor does it promise to advance racial justice.” The association urged voters to “support more meaningful criminal justice reform that will reverse the institutionalized discrimination in our drug policies and protect public health.”

— Colin A. Young and Katie Lannan 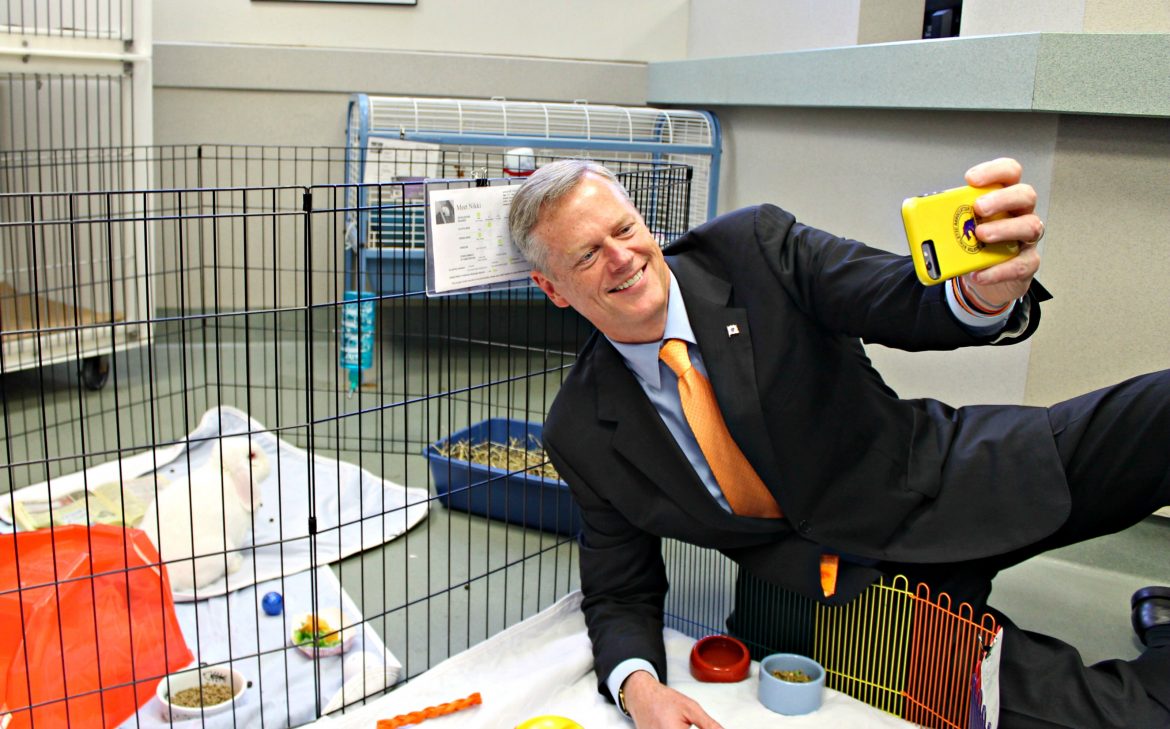 While on a visit to highlight new quarantine procedures for animals, Gov. Charlie Baker, a prolific selfie-taker, got down on the floor of the Animal Rescue League of Boston on Monday and attempted to take a picture with Nikki the albino rabbit.

(* plus a few more sometimes)

From a Massachusetts Department of Environmental Protection press release

BOSTON – The Massachusetts Department of Environmental Protection (MassDEP) has issued a $30,000 penalty to 402 Grove Street Realty LLC and Altab Inc. for violating state oil and hazardous materials cleanup regulations at their properties at 400 and 402 Grove St.

The site includes a two-story commercial building and a standalone, next-door restaurant, Ciao Bella. MassDEP found that the property owners failed to conduct necessary assessment and indoor air monitoring at the site.

In April 2013, MassDEP conducted an audit of the remediation work completed to date, and found the companies had failed to conduct assessment and monitoring to ensure groundwater contamination was controlled and vapors were not impacting indoor air in the buildings at the site. The firms also failed to submit required periodic status reports to MassDEP to verify that a vapor-mitigation system was continuing to operate properly.

As part of a consent order, the companies must fully assess measures to control groundwater and indoor air contamination, and must further evaluate cleanup options. They must also pay $5,800 of the assessed penalty, with the remaining amount suspended as long as the companies meet their requirements and do not violate any other regulations for a year.

“A temporary solution at a contaminated site requires continued monitoring, particularly where there is potential for actual human health exposure such as through indoor air,” said Mary Jude Pigsley, director of MassDEP’s Central Regional Office in Worcester. “Site owners should also be examining other cleanup technologies for the site to ultimately achieve a permanent solution there.”

MassDEP is responsible for ensuring clean air and water, safe management and recycling of solid and hazardous wastes, timely cleanup of hazardous waste sites and spills, and the preservation of wetlands and coastal resources.

Licensed hunters will again have the chance to participate in a state-sanctioned hunt aimed at bringing the deer population in The Blue Hills State Reservation under control, as part of a plan approved by the state Department of Conservation and Recreation last week.

According to DCR, this year’s hunt will take place Nov. 29-30, as well as Dec. 6-7, falling within the state’s shotgun season. Similar to last year’s controlled hunt, hunters will need to apply in order to participate in the four-day event aimed at managing the overpopulation of deer.

“The negative impacts of too many deer within the Blue Hills State Reservation remains of the utmost concern to the Department of Conservation and Recreation,” DCR Commissioner Leo Roy said in a statement released Thursday. “It is important that we enable the forest and plant species to not only regenerate, but to thrive. In doing so, the forest will be able to continue to support all kinds of wildlife, and will remain an excellent place where people far and wide will be able to enjoy and observe nature within the heart of an urban setting.”

Over a four-day period last year, hunters took a total of 64 deer in the 7,000-acre reservation. Last week’s plan was approved in consultation with the state Department of Fish and Game, the Massachusetts Environmental Police, and Massachusetts State Police.