Boston College’s football team isn’t off to the start it anticipated, but a familiar bird to Worcester gridiron fans has given the Eagles reason to be hopeful about the future.

Redshirt freshman Davon Jones, of Worcester and who played his high school football at St. John’s in Shrewsbury, is emerging as the team’s most physical — and maybe best — running back.

It wasn’t that long ago that Jones was nearly an afterthought at The Heights. 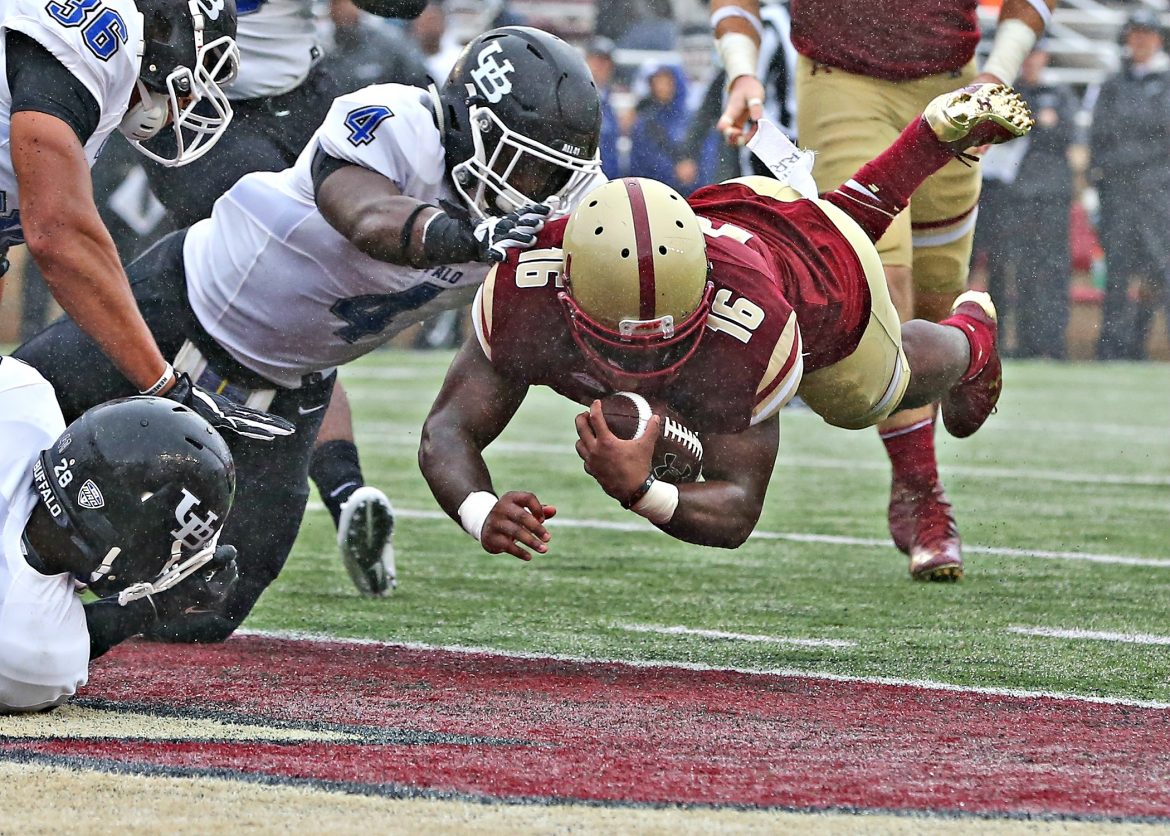 Davon Jones has dived right into his new role as one of BC’s top running backs.

Jones came to Boston College as a mostly unheralded two-star recruit [with some FCS-level interest], brought in to add toughness to the Eagles’ secondary as a safety. Plans quickly changed, thanks to a little coach’s intuition, as Jones was moved to running back during the spring of 2016, after a redshirt season spent at defensive back. 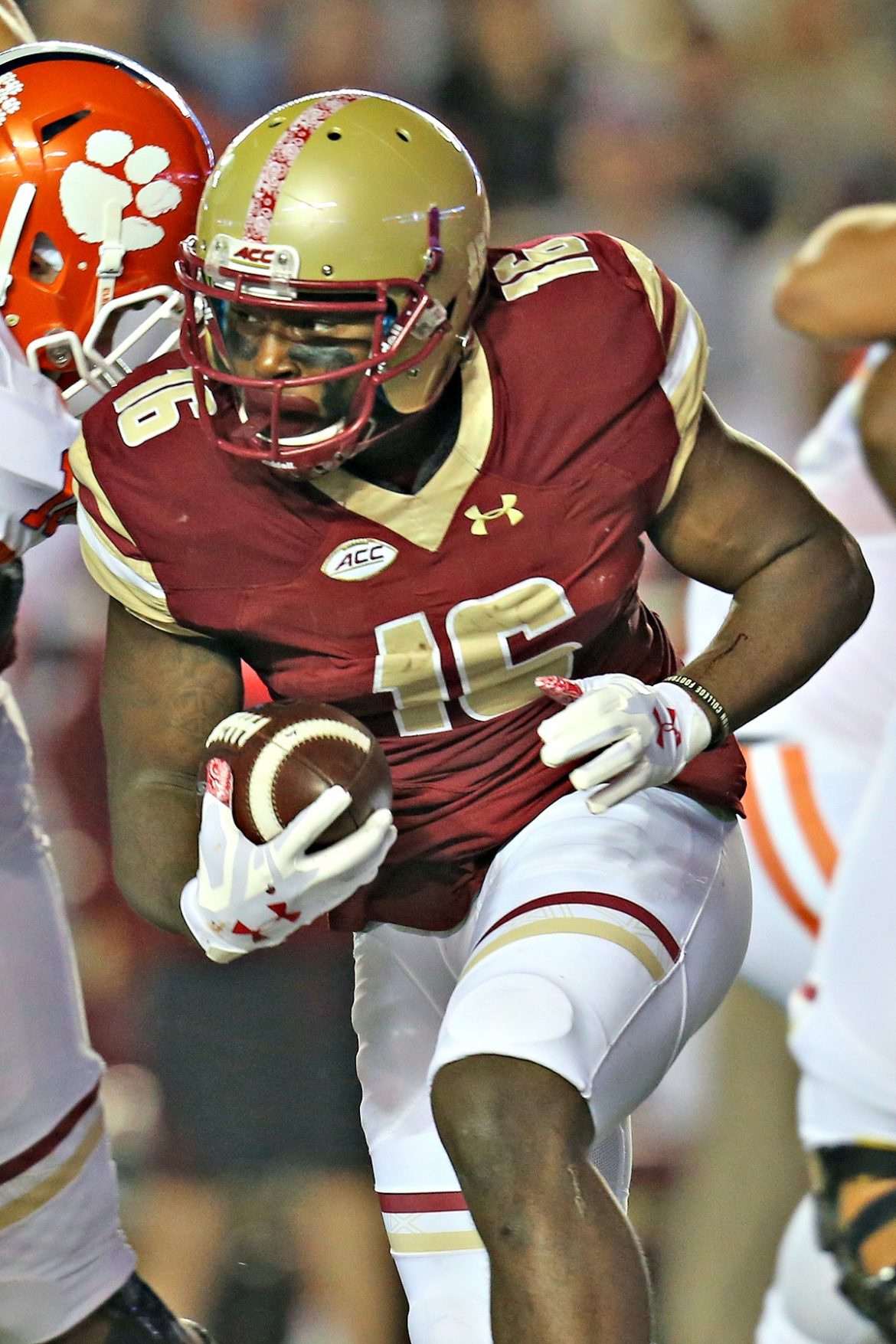 Davon Jones was a hard-hitting defensive back for St. John’s.

After a year of lifting and a spring of learning a new position, Jones, a communication major, wasn’t even listed on the depth chart at running back to start the 2016 season. In fact, he’s still nowhere to be found on Boston College’s gameday depth chart, but Jones ranks second on the team in rushing yards, behind only senior Jon Hilliman, and first in yards per carry, at an extremely efficient 4.7 pace.

Jones has also seen his workload increase as the season has progressed, and he has quickly earned the praise, and trust, of his coaches. After carrying the ball only once in BC’s season-opening loss in Ireland against Georgia Tech, Jones has earned 12 or more carries the last three weeks, and has delivered with 191 yards and a score over that span.

“Davon brings a physicality and a toughness to our running game,” said Addazio, who spurred the spring switch. “It’s pretty hard to stop Davon Jones for less than four yards.”

It’s true that slowing down Jones is easier said than done, as evidenced by Jones’ ability to avoid negative plays. On his 46 carries this season, only one has gone for negative yardage, and even that play was only the loss of a yard.

Jones’ physicality is no surprise to anyone who played with him when he was an all-state safety and wide receiver at St. John’s. Back then, Jones was known as one of the biggest hitters around, and developed a reputation as someone you didn’t want to catch the football in front of. On top of that, he served as an emotional leader for the Pioneers, and someone who never let the team rest on its laurels. 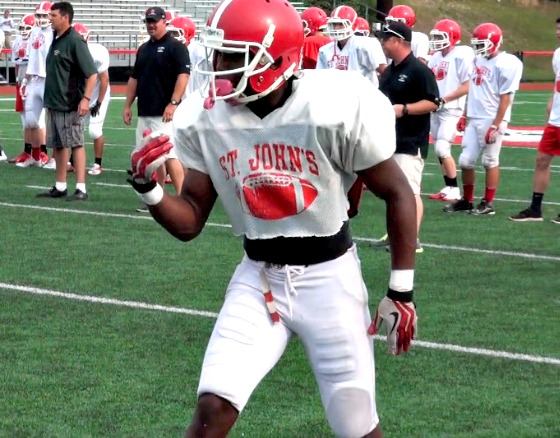 Davon Jones won a 2013 state title with the Pioneers.

“Whenever the team needed a kick in the ass, (Davon) would be the one to give it to us,” said former St. John’s quarterback and current Naval Academy lacrosse player Drew Smiley. “Even though he was obviously one of the most talented players in the state, he was extremely humble to all of us. But, come game day, he played with the attitude that no one could stop him.”

It’s been a remarkable journey for Jones in such a short period of time. After attending middle school at the all-boys Nativity School of Worcester, Jones was an instant star at St. John’s, earning a starting safety spot as a freshman. For a program as talent-laden as St. John’s, starting as a 14-year old is nearly unheard of, but Jones not only started, he excelled.

“My mom wanted me to get a Catholic school education,” Jones said. “So that’s how I ended up [at St. John’s], and I’m glad I did.”

As a junior, Jones and Smiley combined to lead the Pioneers to Gillette Stadium for the 2013 Division 2 state championship game. While St. John’s ultimately came up short against powerhouse Mansfield, Jones made his presence felt with an interception and forced fumble on defense. [Editor’s note: Undefeated Mansfield was so good that year, it beat national superpower Dunbar (of Baltimore) in a nationally televised tilt.]

It was the culmination of an excellent season that saw Jones make big plays as both a safety and receiver for the Pioneers, including a huge game against Springfield Central in the state semifinals, and a collection of big hits heard around Central Mass. 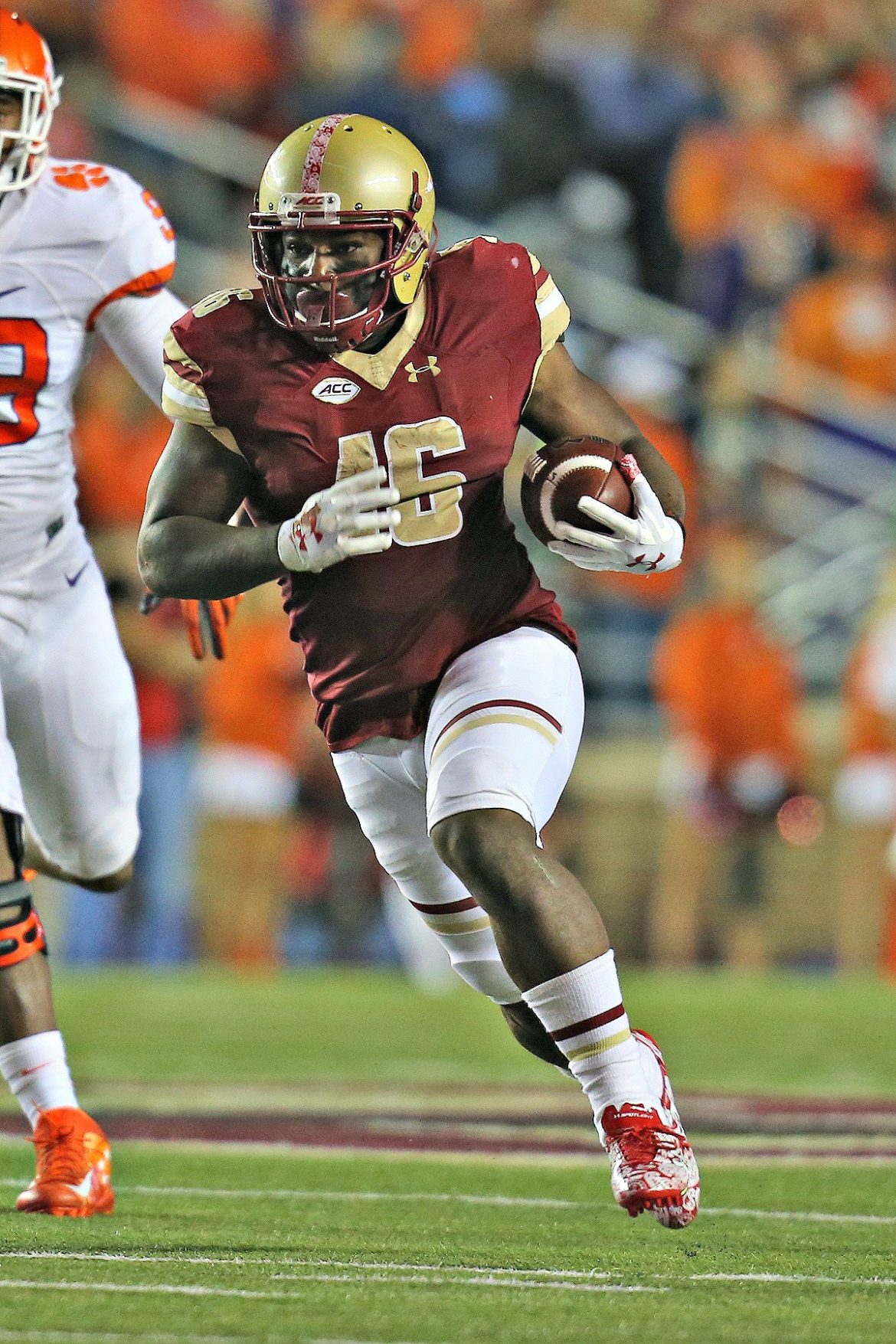 Jones on the run

Now serving as the power back in Boston College’s offense, Jones knows his future is bright. Hilliman, BC’s speed back, will graduate after this season, and no other back on the current roster has Jones’ experience or physicality.

For the next three seasons, Jones could become the unexpected face of Boston College football.

“Honestly, this still feels like a dream to me,” he said. “But I’m just taking it one day at a time, just trying to be patient and learning from my coaches. I just want to help this team win.”

Jones and his Boston College teammates will be back in action next Saturday for their homecoming game against Syracuse at Alumni Stadium. Kickoff is scheduled for 12:30 p.m.; the game can be seen locally on myTV38 Boston.