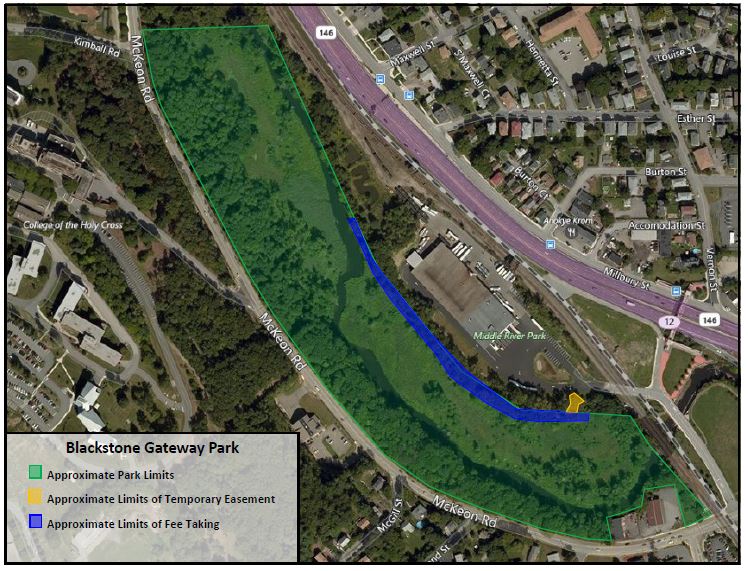 The land at 692 Millbury St., which cost $19,730, “is necessary to construct the walking path along the eastern bank of the river with minimal impacts to the wetlands at the site,” according to a memo from Chief Development Officer Michael E. Traynor to City Manager Edward M. Augustus Jr.

Upon completion, Augustus wrote to the City Council, the park “will feature 3,000 linear feet (approximately one-half mile) of accessible walking paths, elevated boardwalks and three bridges crossing the headwaters of the Blackstone River, along McKeon Road.

“Included along the trails and boardwalks are observational platforms, kiosks, and interpretive signage providing historical and ecological information about the Blackstone River and the role it played in the history of Worcester and the Blackstone Valley Corridor. This new riverfront park will stand out as a unique urban park in the City providing recreational amenities while maintaining the feel of a forested park surrounded by flowing water and stands of large canopy trees.”

In describing the project, Traynor wrote, “Where earthen trail access is not possible, galvanized tube steel boardwalks with stainless cable railings will bring visitors into and over a riparian meadow and along the banks without disturbing the site below. The cable railings offer the most unobstructed views and reference the area’s industrial wire and cable manufacturing legacy. Three galvanized steel pedestrian truss bridges will span the river to connect the trail sections and will be supported by dynamic helical pile abutments which will anchor the bridge in the glacial soils below the river without disturbing the wetland soils.”

District 3 City Councilor George Russell told the Sun, “I can’t wait for it to happen. … It’s going to be a beautiful location. I know we’re close to reality.”

It’s easy to be cynical about the pace of development, especially on a project that, if current estimates hold, will have taken 16 years.

However, credit is due to those who ensured the federal, state and city governments kept this program alive all these years.

Blackstone Gateway Park will be a major enhancement to the city’s green space and continue the beautification and enjoyment of the Quinsigamond Village neighborhood. Those are objective civic goods … and worth the wait.