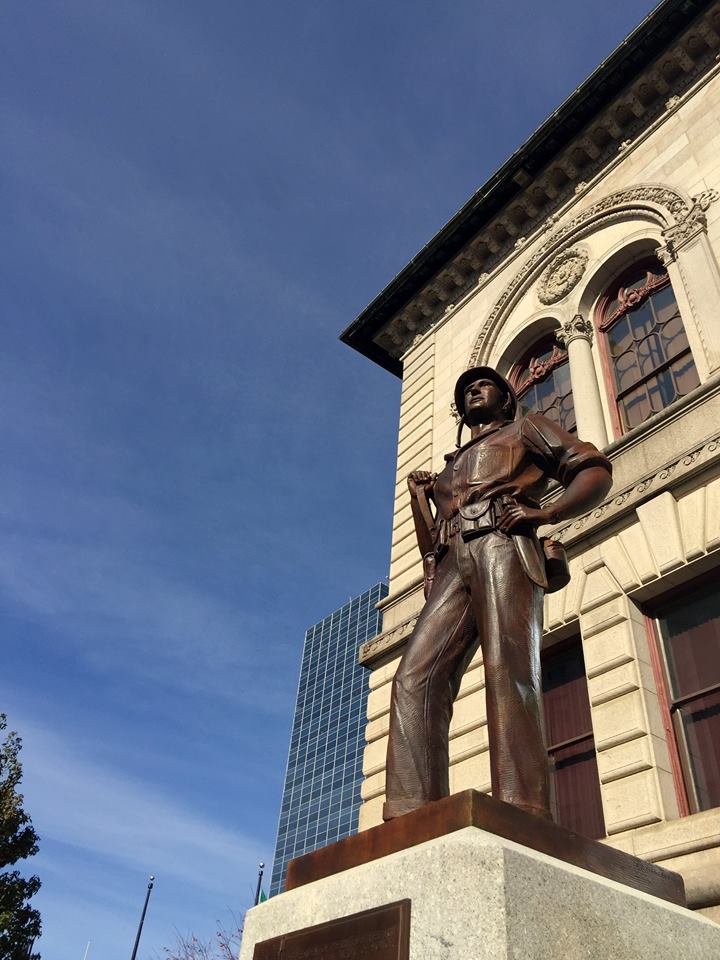 Courtesy of City of Worcester

A gathering under the November sun last Thursday was timely. Two days after a divisive presidential election, and a day before Veteran’s Day, a long-gone World War II hero reminded us of all there is to cherish and protect.

The statue for Lt. John Vincent Power was rededicated outside Worcester City Hall. The monument to the young man in uniform, left hand on hip and looking out into the world, now sports its original bronze finish at its post on the south side of City Hall.

The sculpture was refurbished using $10,000 in city funds — a small expenditure for a city son awarded the Medal of Honor.

Power demonstrated, according to the citation awarded his family by President Franklin Roosevelt, “conspicuous gallantry and intrepidity at the risk of his life above and beyond the call of duty” during a victorious battle in the Marshall Islands Feb. 1, 1944.

Power, who went by “Jack” and attended city public schools before graduating from the College of the Holy Cross in 1941, was just 25 when he lost his life so far from home.

After storming the beaches of Roi-Namur with thousands of other Marines, he was shot in the stomach while setting up an explosive on a Japanese pillbox. He pushed on, covering the serious wound with one hand and firing with the other. Power, the citation says, “courageously advanced as another hostile position was taken under attack, fiercely charging the opening made by the explosion and emptying his carbine into the pillbox.” But as he was attempting to reload, more enemy bullets took him down.

In communities across the country, such stories live. Whether retold over a cold drink on Memorial Day or across the Thanksgiving table, laid bare in dusty diaries or embodied in bronze statues, they sober us and connect us to one another and the past.

They stir the country’s founding soul.

That sense — that surety — of being on the same side, and being on the right side, was especially stark during World War II. But it remains practically an American birthright, and it is powerful.

We owe it to ourselves, our soldiers and each other to bow our heads sometimes, shed tears sometimes, and remember the sacrifices, bloodshed and love that brought us safely to the present — and all its blessings and battles.

Courage and perseverance, as Lt. Power showed on a small island in the Pacific, is a winning stance, whatever the situation or outcome.

The city did good service to this memorial. Other war monuments and markers around Worcester are also kept up to varying degrees by volunteers, veterans and city workers. It’s a lot to tend, but it matters.

Indeed, any form or instance of true bravery on behalf of our country merits our thoughts and salutes.

People like Jack Power remind us that the United States is about moving forward. And it will always be worth fighting for.