This article was originally published in the Sept. 18, 2016 edition of the Sun.

Most graduates from Becker College’s game design program compete for work in the high-tech space. Breeze Grigas, however, created a niche for himself in the analog world with his tabletop game company, Zephyr Workshop.

The company’s flagship product, “AEGIS,” which is an acronym for Assault, Evasive, Guard, Intel, Support, describes the various classes of giant robots that players command and fight within the game. Each turn, players are allotted a certain amount of energy to shoot, move and even combine robots to harness their unique specialties. 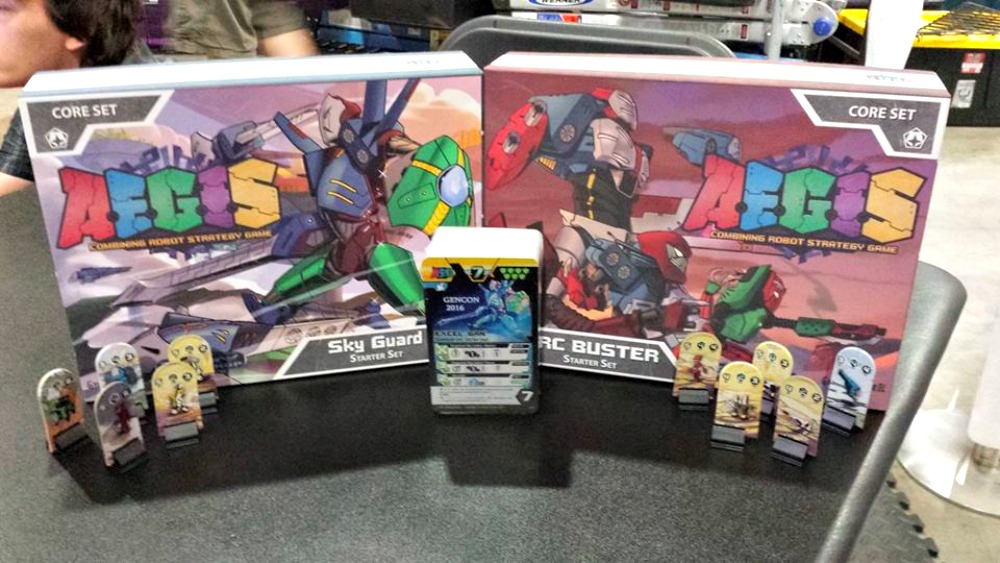 Grigas drew ideas for these games from his own childhood, citing his love of giant robot anime and strategy games as his sources of inspiration.

“I grew up watching nothing but ‘Power Rangers’ and ‘Voltron.’ That’s pretty much been my life, just watching giant robot anime.”

So Grigas studied at Bay Path Regional Vocational Technical High School in Charlton for programming, and then later drafting/CAD (computer-aided design), an experience which helped define his future path as a game designer.

“I intended to make games or do something similarly creative going into high school, and going to a high school that let me explore different professions rather than normal classes really helped me out.”

After graduating, Grigas attended Becker College for its renowned game design program, which helped him find other like-minded individuals who would later comprise his team. 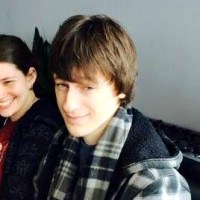 “We’re all Becker alumni,” Grigas said. “Sarah Como is my right-hand partner. She’s our coordinator and producer.” Along with Como as their chief operations officer, Zephyr Workshop also has two other Becker alumni, Jesse Clark and Zach Kettell, on its roster.

“I do more creative work, Sarah is more for organization, Jesse is math oriented, and Zach Kettell is the secretary and programmer,” Grigas said. “We graduated out of Becker around the same time. Sarah and I also went through the MassDiGI (Massachusetts Digital Games Institute) summer innovation program.”

This innovation program challenges students to design their own prototypes and pitch them in a “Shark Tank” style competition. It was here where Grigas found mentorship in Monty Sharma, the managing director of MassDiGI.

“Breeze was in our summer program the first year we ran it,” Sharma said. “In the beginning (of the program) he needed to do a little work.” According to Sharma, Grigas’ original idea needed a lot of rethinking and effort in order to flourish, which is exactly what Grigas did.

When Grigas took Sharma’s advice, things started to come together on a level Sharma did not initially expect. “The effort he put in and all the effort he put into things really impressed me,” Sharma said. “The love of this project forced him to build up that kind of attitude and approach, and made him a better person.”

And like any other source of mentorship, this relationship led to a positive change in Grigas’ life.

“He’s gotten to be very pragmatic and businesslike,” Sharma said. “It’s because he knows what it takes to get things done.”

Grigas himself valued Sharma’s executive experience and input throughout the process, saying, “If we ever went to Monty with a problem, you know he’s seen it at least five times before. He’s done everything.”

Meanwhile, his own inspiration for “AEGIS”’s structure came from a place of pragmatism. “I wanted a game that was simple like ‘Warhammer’ and ‘War Machines’,” Grigas said, “these games that have $500 buy-ins and I could just start playing them.”

But with complicated scoring systems, mechanics and measurements, a lot of tabletop games are too complex to attract the casual player. So, to make the game more approachable, Grigas decided to go a simpler route.

So, “AEGIS” was created with this business- and player-friendly model in mind. Perhaps most interesting is their use of a free print-and-play version of “AEGIS” to get attention and get people playing. 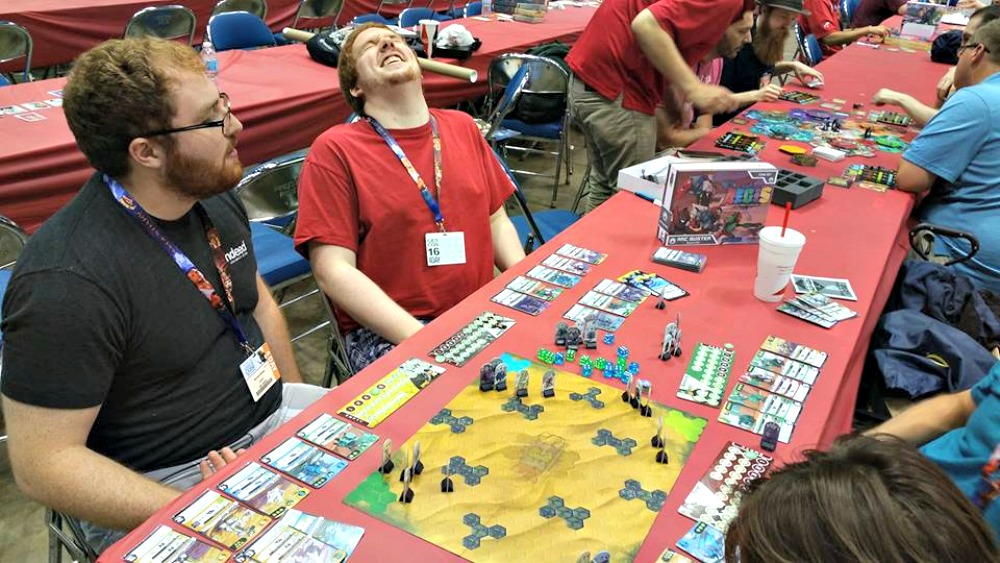 “You want people to try and play your game,” Grigas said, and even though people can print out a demo online, Grigas says the aesthetic, content and overall gameplay will make you want to buy the full version.

So, after formulating their idea, designing characters and engaging in hours of play-testing, their idea was starting to take shape.

“We brought 10 copies of our handmade game, and that’s conveniently where our publisher was also floating around,” Grigas said. “He sat down and played, and the next thing I know we were having dinner and talking more.” 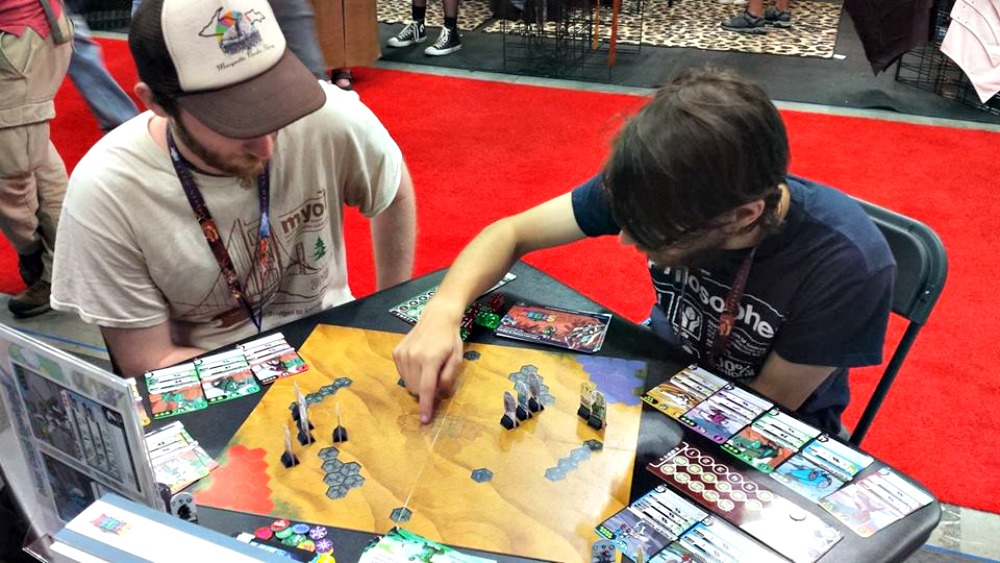 Grigas added that for many reasons, Gracia enjoyed the game and wanted to know more. “Jeff likes zombies and ninjas and pop culture combat games. Popular with males 12-to-36, that kind of thing. It clicked with him because the system was interesting and worked quickly.”

And after a year of negotiation, Zephyr signed an agreement with Greenbrier to produce “AEGIS” and distribute it nationally.

What surprised Grigas the most was how fast everything seemed to work with both the game and with Greenbrier. “We were very new to this at the start, so we went from fledgling (post-college) developers making this game because we thought it was cool, and tried to build a company out of it.”

But, he acknowledges, “It’s pretty uncommon for a game to get picked up that early.”

Nowadays, with help from Greenbrier Games for production and logistics, Grigas and the Zephyr team are looking forward to attending more conventions and getting the word out, and are hoping to gain nationwide customers.

“We’re hoping to raise a bunch of money on that so we can produce the game and get it published and in stores nationally,” Grigas said. “That’s the big goal; that we want the game to go big.”

And with the way the game is designed, it may catch on quickly. From its simple and fast gameplay to its rich aesthetic, “AEGIS” draws the best from many sources.

“When you’re actually playing it, it is pretty easy to understand and play, but that wouldn’t mean anything if the aesthetic wasn’t there, so we put a lot of effort into that,” Grigas said. “It’s cartoony and organic. We’re not trying to make super grizzled robots like ‘BattleTech’ and ‘Warmachine’. We’re trying to be more kid-friendly but still look really cool.”

For his inspirations, Grigas cites Japanese anime television series such as “(Neon Genesis) Evangelion” and “(Tengen Toppa) Gurren Lagann,” along with artists such as Hiroyuki Imaishi, and Yasuhiro Nightow, author of the anime series “Trigun.”

“He (Nightow) has a very dynamic colorful style that I really like. He just operates on rule of cool, a lot of what I operate on. Usually just ‘Is this what your audience wants to see and does it look cool?’ rather than focus on physics or actual functionality.”

Next up on their agenda is their newest game, “Florafiora,” a simple management/puzzle game about uniting different communities of plant people called Seedizens. The original concept and all the artwork is by Emily Hancock, another designer Grigas works with.

“She’s also a pretty full-time member on the team because of our work for this project and artwork for the board on ‘AEGIS’,” Grigas said.

In “Florafiora,” players manage characters and forward them from planet to planet collecting resources and connecting the different worlds with vines, and they all lock together. “You’re building a connected universe,” Grigas said. “It’s a really pretty connect-the-dots with different seasons. It’s like (mobile game) ‘Fallout Shelter’ meets ‘Roller Coaster Tycoon’.” 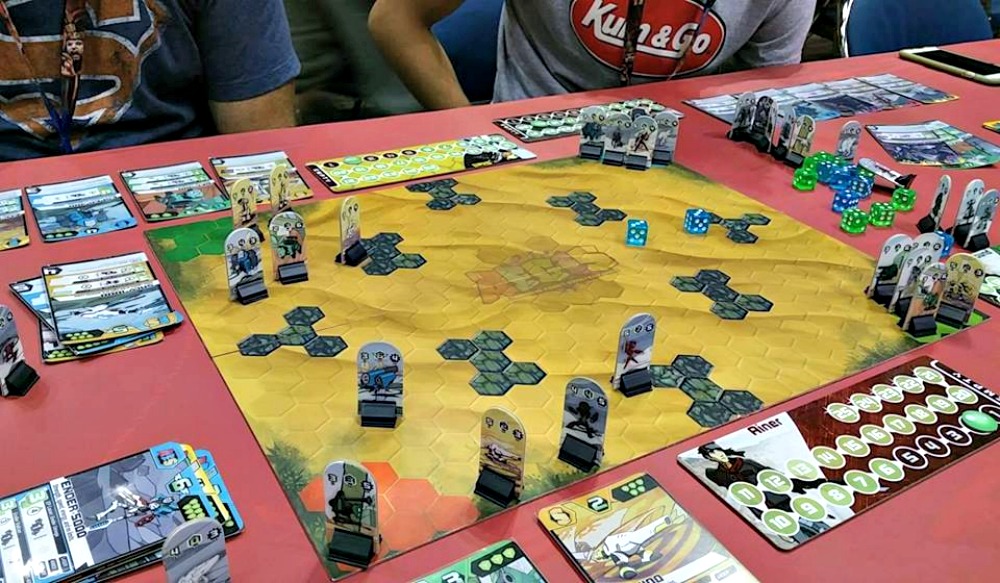 Along with their new games and continuing to attend local gaming conventions, Zephyr and Greenbrier will also be setting up a GoFundMe crowdfunding campaign for “AEGIS” to help fund its distribution.

As far as his own career, Grigas is happy to be making games for a lot of reasons. “I came into the industry to make games,” he said. “That’s basically what it came down to. I wanted to make games that would inspire other people to make games. I want to put my heart and soul into it.”

Meanwhile, for aspiring game creators, Grigas had a few choice pieces of advice:

“Make stuff and show it off to people,” he said. “That’s the only reason anything happened for us. We made 10 copies of our game, brought it to a convention, and got picked up by a publisher.”

This combination of hard work, luck and perseverance is no new formula for startups, but it’s especially important for game designers.

Overall, despite “AEGIS”’s success and Zephyr Workshop’s bright future, Grigas remains humble about his own accomplishments, and hopeful that he can serve as an example for others.

“I like showing it to people and I like seeing people enjoy the stuff I make, and I like the idea that I will inspire other people to make their own games too,” Grigas said. “I think that’s honestly the most important part. I want to make sure if people have ideas and something they believe in that they will follow it and see that it’s possible.”