Worcester Public Schools are set to ring the bell on a new year. 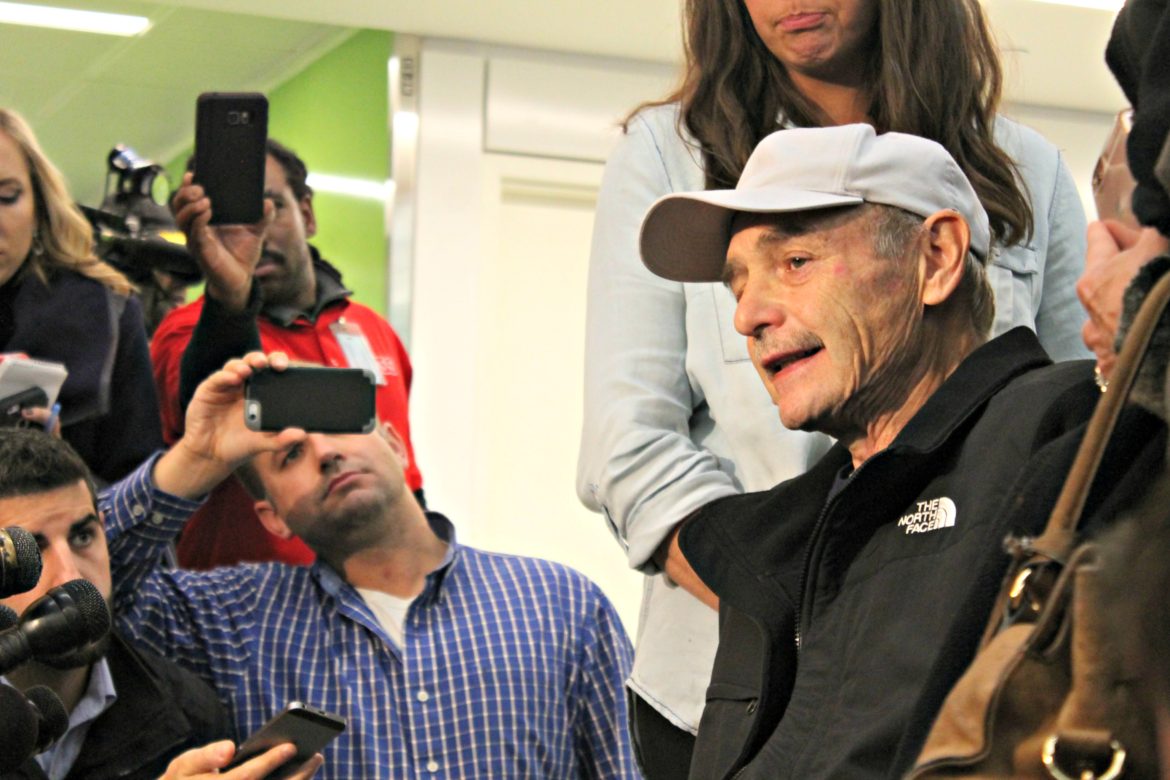 It would cost at least an additional $27 million per year to fulfill the unmet demand for high school vocational education programs across Massachusetts, programs that advocates say are critical to meeting the labor demands of businesses in the state, according to a report released Friday.

The Massachusetts Budget and Policy Center, in a paper titled “Skills For Our Future,” reported that while a career, vocational and technical education (CVTE) costs about $5,000 per pupil more than a traditional high school education each year, good CVTE programs can boost college attendance and career earning power.

“The high performance of Massachusetts’ economy is due largely to our highly skilled and well-educated workforce,” Noah Berger, president of MassBudget, said. “Well-designed vocational education programs can provide students with high quality academic and vocational education, including hands-on learning, to prepare those students for fulfilling lives and careers.”

The 28 regional vocational schools and nine in-district vocational schools in Massachusetts serve about 48,000 students, equal to roughly 17 percent of the statewide high school enrollment, MassBudget said. CVTE enrollment has climbed about 14 percent in the last decade, from an enrollment of 42,000 in 2005.

Though more students have enrolled in CVTE programs in the last 10 years, MassBudget said the demand for CVTE far outpaces the availability of programs, with a disproportionate share of the demand coming from the state’s gateway cities.

There were 3,200 students on CVTE waiting lists statewide as of October 2015, MassBudget said, citing data from the Department of Elementary and Secondary Education, but that figure does not account for the 52 predominantly rural communities with no local, regional or in-district vocational option for high schoolers. MassBudget estimated 2,200 students from those towns would enroll in a CVTE program if they had access.

Gateway city students represent 53 percent of the CVTE waitlist — 1,700 of the 3,200 students — though gateway cities account for just 26 percent of students statewide. In Worcester, 500 students are waiting to get into a CVTE program, according to the Massachusetts Association of Vocational Administrators.

“With this in mind, we estimate that it would take $27 million annually at the very least to address the unmet demand for vocational programs,” MassBudget senior policy analyst Colin Jones wrote in the report. “This baseline total of $27 million reflects the minimum districts would have to spend, the $5,000 per pupil incremental cost of vocational education (5,400 students at $5,000 each). This cost would be shared by the state and local communities, as students moving to vocational education would often generate additional Chapter 70 aid.”

An economic development law approved in August included $45 million to invest in equipment and training at career and technical schools. The Alliance for Vocational and Technical Education said the funding in the economic development bill will facilitate dozens of grants over three years. An initial round of grants in February 2015 awarded $9.3 million to 35 high schools, community colleges and vocational training providers, according to the alliance.

In January, a group of business groups and others announced the formation of the Alliance for Vocational and Technical Education, bringing together organizations as varied as the blue chip Massachusetts Competitive Partnership, the interfaith Massachusetts Communities Action Network, and think tanks Pioneer Institute and MassINC to advocate for expanded access to CVTE programs.

Former Lt. Gov. Tim Murray, now president and CEO of the Worcester Regional Chamber of Commerce, serves as a co-chair of the group.

Related: Former speaker of the House grateful upon return

BOSTON — Salvatore DiMasi, a once-powerful Massachusetts House speaker who was convicted on federal corruption charges in 2011, returned home to Boston last week after battling cancer during his time in prison.

An imposing but jovial presence on Beacon Hill during his time in power, DiMasi appeared gaunt and spoke with a weakened voice while seated in a wheelchair. Wearing a gray baseball hat, jeans and navy waffle shirt and black North Face jacket, DiMasi immediately hugged both his stepchildren, Christian and Ashley, who were waiting for him at Logan International Airport.

The former North End Democrat, who was granted a “compassionate release” by a federal judge, made a brief statement to the gathered media Nov. 22 after taking a JetBlue flight from Raleigh, North Carolina, to Boston with his wife, Debbie, but did not take questions before leaving for his new home in Melrose. 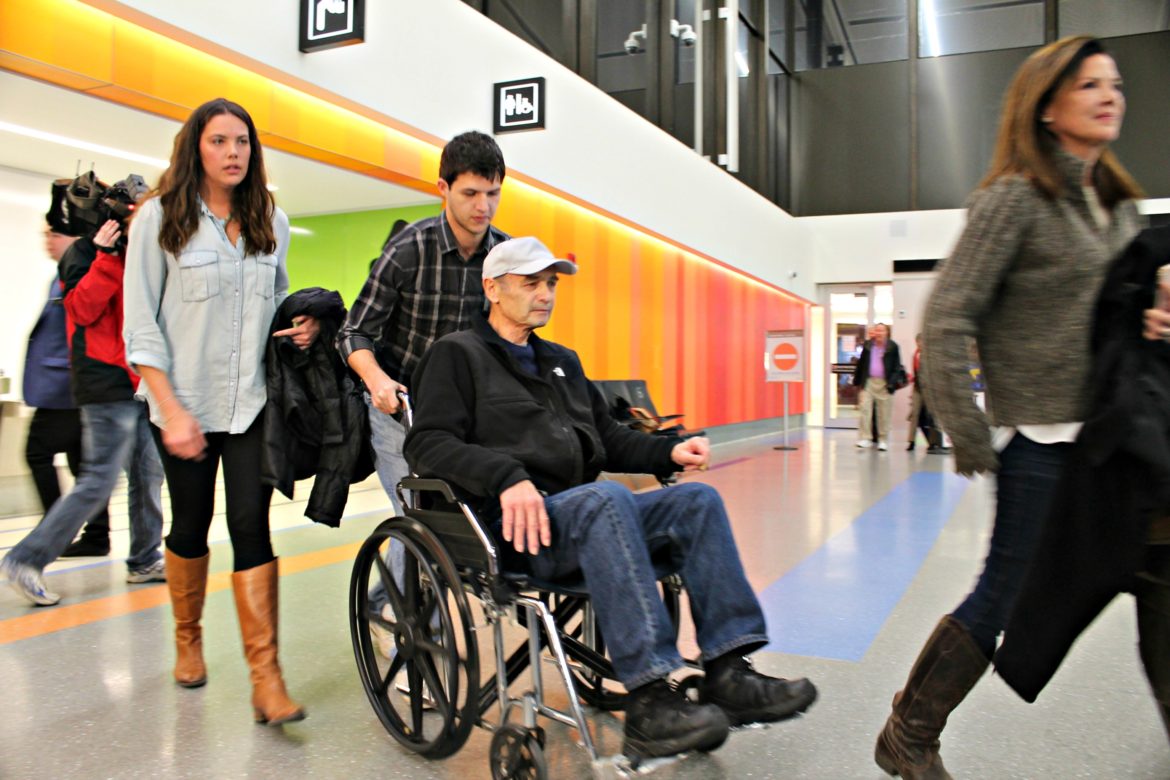 Sal DiMasi’s stepson pushes the former House speaker through the airport as his stepdaughter, left, and wife walk along.

“I just want to say how happy I am, grateful and thankful that I’m home in Boston where I live with my family,” DiMasi said. “I want to thank everybody for making this possible whoever made it possible.”

DiMasi, 71, walked out of Butner Federal Correctional Complex in North Carolina five years after federal Judge Mark Wolf handed down an eight-year prison sentence for corruption. He had a projected release date of November 2018, taking into account time off for good conduct, before his medical release was granted by Wolf.

DiMasi spent 30 years in the House, including more than four as speaker, during which time he successfully fought to preserve gay marriage, keep casinos out of Massachusetts and played a significant role in writing the universal health care law that became the model for the Affordable Care Act.

That legacy became tarnished by reports of pay-to-play that led to his resignation in 2009 and subsequent conviction in 2011 on corruption charges stemming from his role in a scheme to steer almost $18 million in state contracts to the Burlington software company Cognos in exchange for $65,000 in kickbacks concealed as payments from his law associate.

Since his conviction, DiMasi has maintained his innocence. “I remain outraged that my reputation, my integrity and my good name have been sullied by this process. I will do everything in my power to earn back those things in the coming years,” he said on his way to prison.

DiMasi did not address his conviction upon arriving home, and said he was focused on reuniting with friends and family and regaining his health under the care of doctors at home. Wolf granted DiMasi a “compassionate release” earlier this month due to his poor health condition.

DiMasi was diagnosed in prison with tongue cancer and then prostate cancer. Though both cancers are said to be in remission, the treatment for the tongue cancer severely affected his throat, causing difficulty swallowing and making DiMasi prone to choking episodes, according to court filings.

In their petition for DiMasi’s release, his attorneys said his weight has dropped to 174 pounds, and if his weight loss continues he will need a feeding tube.

Calling his wife Debbie his “champion” and crediting his family with giving him the strength to fight his illnesses, DiMasi said, “I’m a fighter. I’m gonna fight this all the way.” 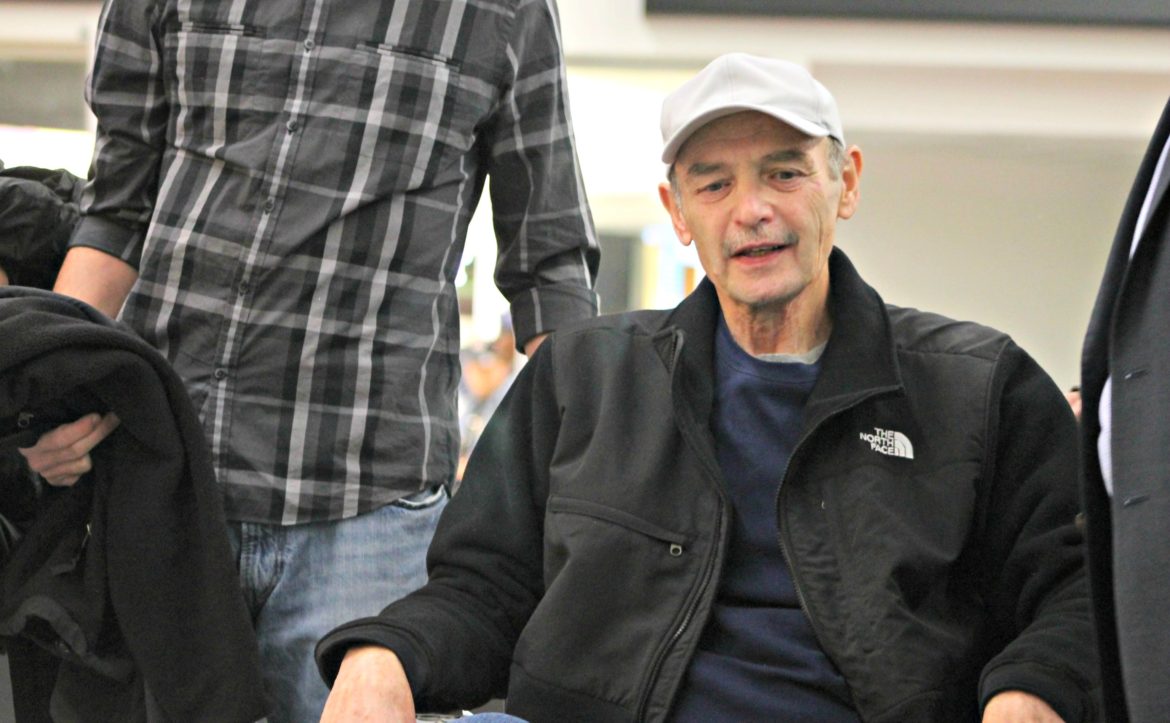 Sal DiMasi has battled cancer while in prison on a federal corruption conviction.

DiMasi called his five years in prison a “trying and difficult experience for me.”

DiMasi will spend six months under home confinement, according to the release order from Judge Wolf, and two years of supervised released. He will be allowed to leave home for medical appointments and religious observances, though the court said it would revisit the issue of home confinement after three months.

DiMasi’s associate, former Beacon Hill lobbyist Richard McDonough, was also convicted and sentenced to seven years in prison, while DiMasi’s accountant Richard Vitale was acquitted of federal charges brought against him in the case. McDonough has since been released from Fort Dix in New Jersey.

During her husband’s time in prison, Debbie DiMasi has been critical of the prison health care system and a vocal advocate for a compassionate release program at the state level.

State public universities and community colleges, which do not include the University of Massachusetts, are preparing to ask Gov. Charlie Baker for roughly $40 million in additional funding in next year’s state budget, a spending increase that would dwarf this year’s.

Separately, the Department of Higher Education is also poised to seek a 2 percent increase, or $2.6 million, in the fiscal 2018 budget to support the agency’s “Big Three” plan to increase access to college, improve completion rates and close achievement gaps.

“The demand for assistance to low and moderate income students has increased while the cost of attending college has risen,” the budget request proposal states.

As Baker begins assembling a fiscal 2018 budget proposal due in late January, agencies across state government are preparing budget requests. Budget officials do not yet know how much additional revenue might be available for spending in the new year that begins in July, but in this year’s budget the governor’s team has been tracking slow-growing revenues and spending pressures from areas like MassHealth that created an early $294 million hole.

A fiscal affairs subcommittee of the Board of Higher Education plans to meet Tuesday, Nov. 29, in Boston to review and vote on the fiscal 2018 budget recommendations. The full board meets Dec. 6 to ratify the report before it will be referred to Education Secretary Jim Peyser.

According to a copy of the budget request, the Board of Higher Education is also expected to request an additional $450,000 for a dual-enrollment program that allows Massachusetts high school students to take free or reduced-cost college-level courses and earn credit toward their high school and college diplomas, and a $1.5 million increase for the performance incentive fund.

The Performance Incentive Fund, created to improve degree production and meet the needs of the workforce, was funded at $2.75 million this budget cycle, which was down from $7.5 million in fiscal 2014. The department plans to ask for $4.25 million in next year’s budget, according to the draft recommendation.

The draft budget recommendations call for $20 million in additional spending on university campuses in fiscal 2018 and $20 million for community colleges. Those increases include carried-over collective bargaining costs that weren’t fully funded in fiscal 2017 and the inclusion of funding through the performance-based formula for public higher education institutions that had been carried on the department’s books.

The formula funding included in the recommendation is double what the universities and community colleges are receiving in fiscal 2017.

The board is also expected to recommend a 7 percent, or $20 million increase, for community colleges after they saw their total available funding increase by just 2 percent in fiscal 2017.

The campus requests total $37.4 million to finance unfunded collective bargaining costs for fiscal 2017 and the estimated cost in fiscal 2018.

“The full funding of collective bargaining costs for both the state universities and community colleges is critical to maintaining affordability for our students and is not a component of the additional investment requested to be allocated through the respective performance-based funding formulas,” the budget report states.

165 thoughts on “On Beacon Hill: Hundreds of Worcester students languish on waitlist as report calls for $27M to fill vocational education spending gap”