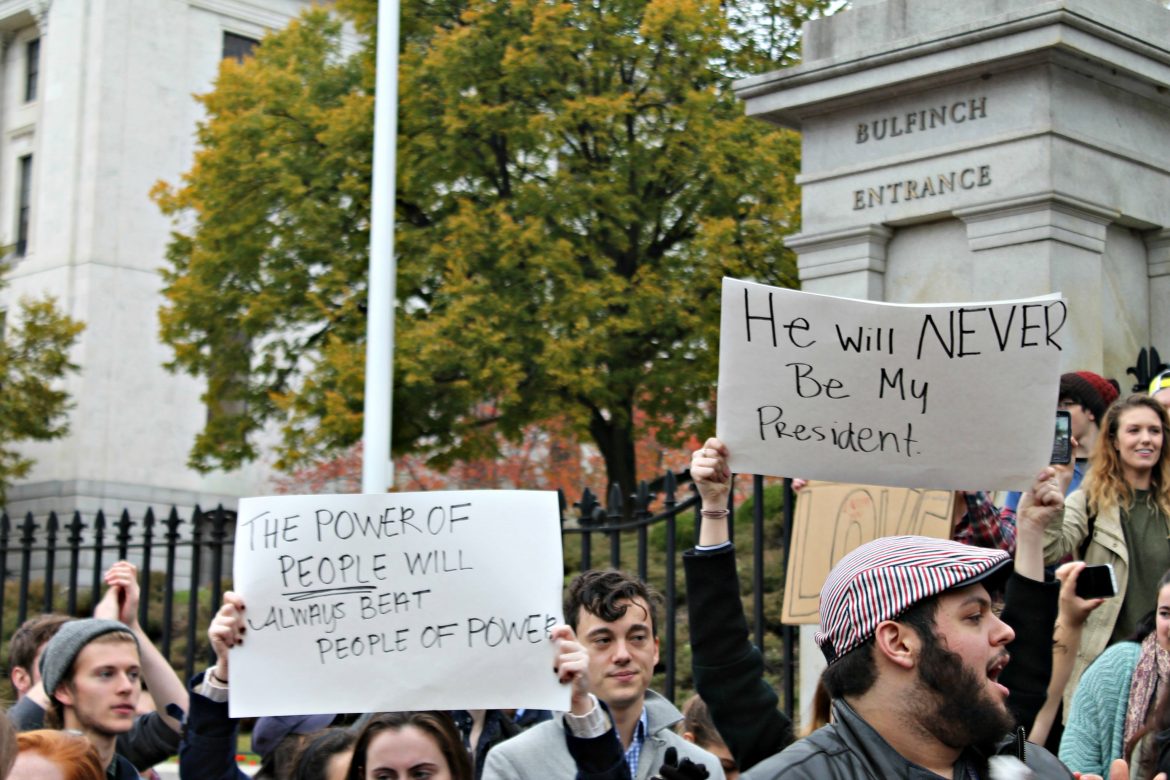 Trump carried 94 communities in state, including many poorer, smaller towns

Trump Country in Massachusetts hits its farthest point west in the Franklin County town of Monroe, the state’s second-smallest municipality — and among its handful of poorest communities — which favored the president-elect by a vote of 26 to 25.

It includes pockets of the North Shore and the South Shore — such as Salisbury and Kingston — along with the Cape Cod town of Bourne, and a wide swath of Central Massachusetts, according to a Boston Globe map breaking down the presidential election vote community by community.

But while Massachusetts as a whole falls solidly within the “blue wall” of states expected to back Clinton, 94 of its 351 cities and towns threw their support behind Republican Donald Trump, who met with President Barack Obama Thursday, Nov. 10, and will be inaugurated in January as the 45th president.

From Royalston to Pepperell — with Winchendon, Ashburnham, Ashby and Townsend in between — a line of six towns in a row along the New Hampshire border backed Trump, by margins ranging from 1.2 percent (Royalston) to 13.6 percent (Ashby).

If you started at that northern border, you could drive straight through to Connecticut or Rhode Island, along multiple routes, without ever passing through a community that backed Clinton — for example, going from Royalston to Monson or Ashburnham to Dudley. Dudley begins an unbroken line of Trump towns at the state’s southern border, stretching seven municipalities in total, including Webster, Douglas, Uxbridge, Millville, Blackstone and Bellingham. 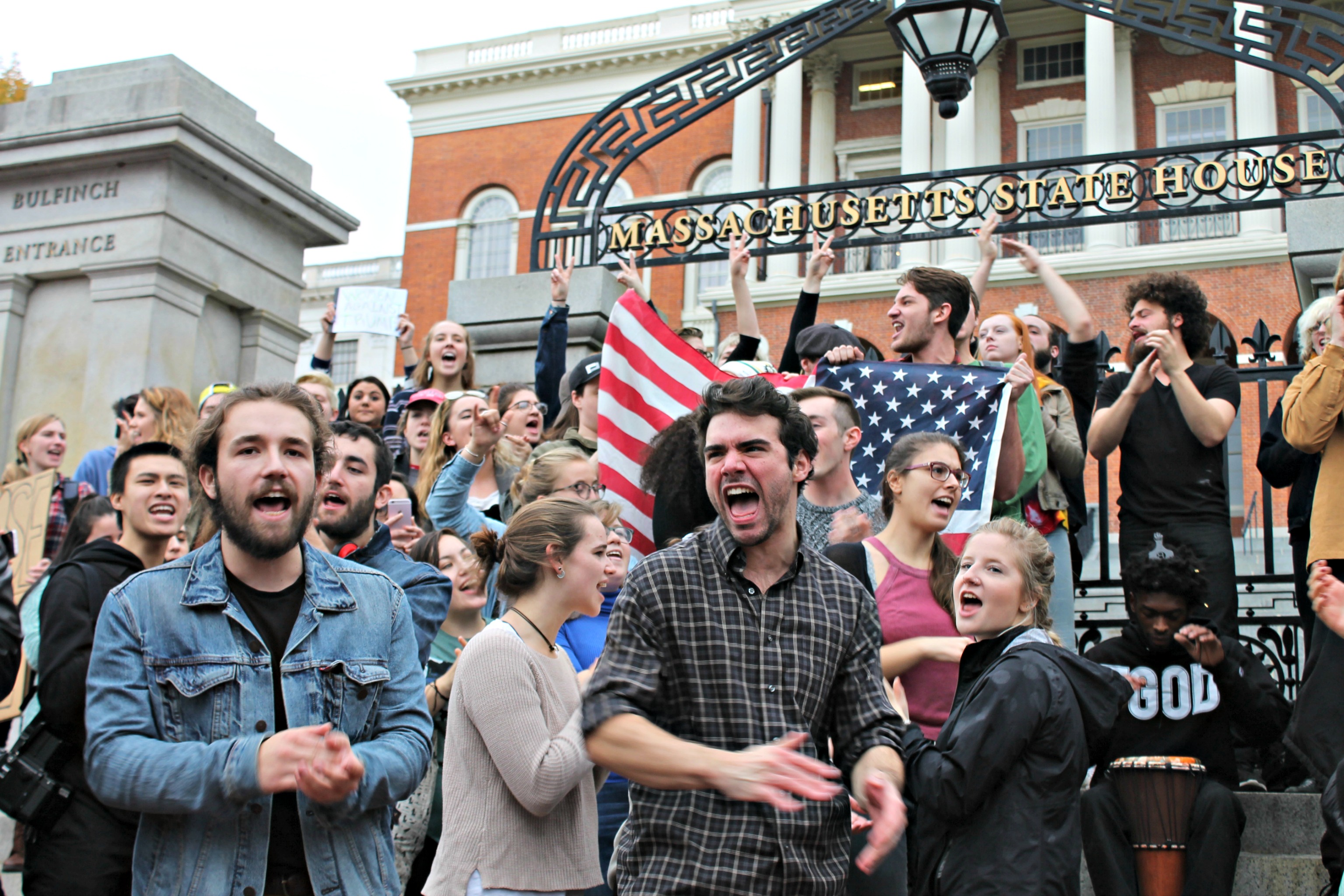 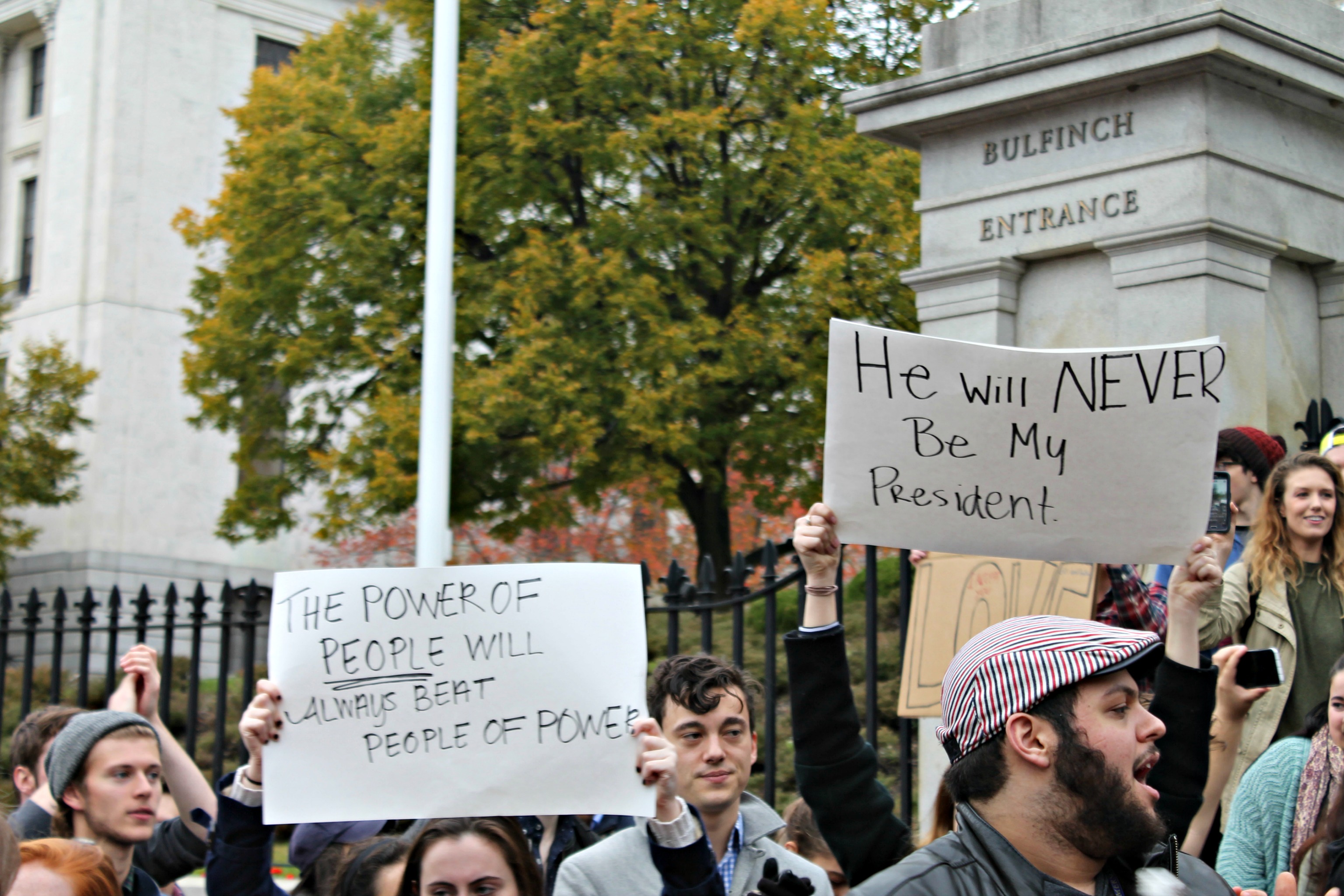 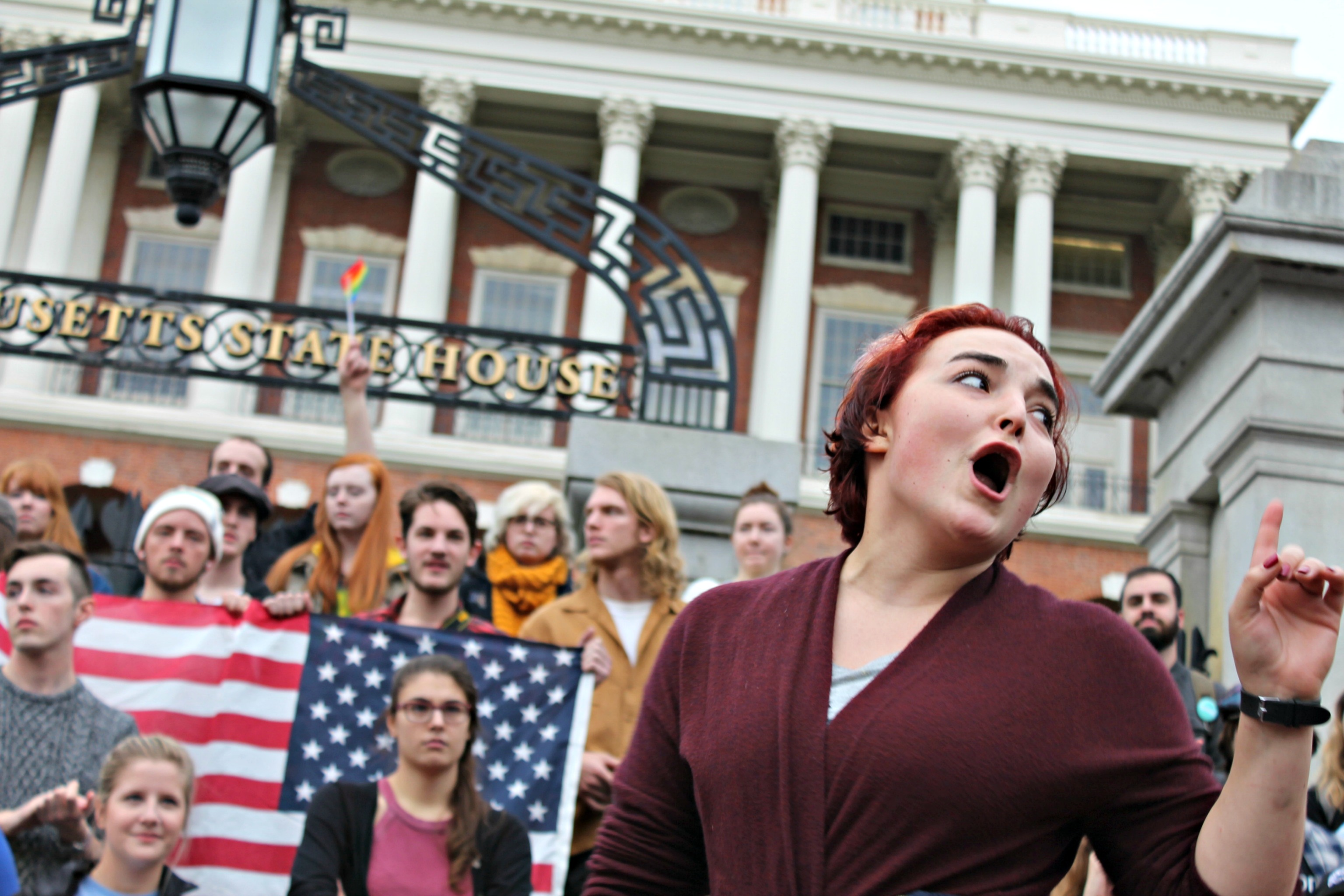 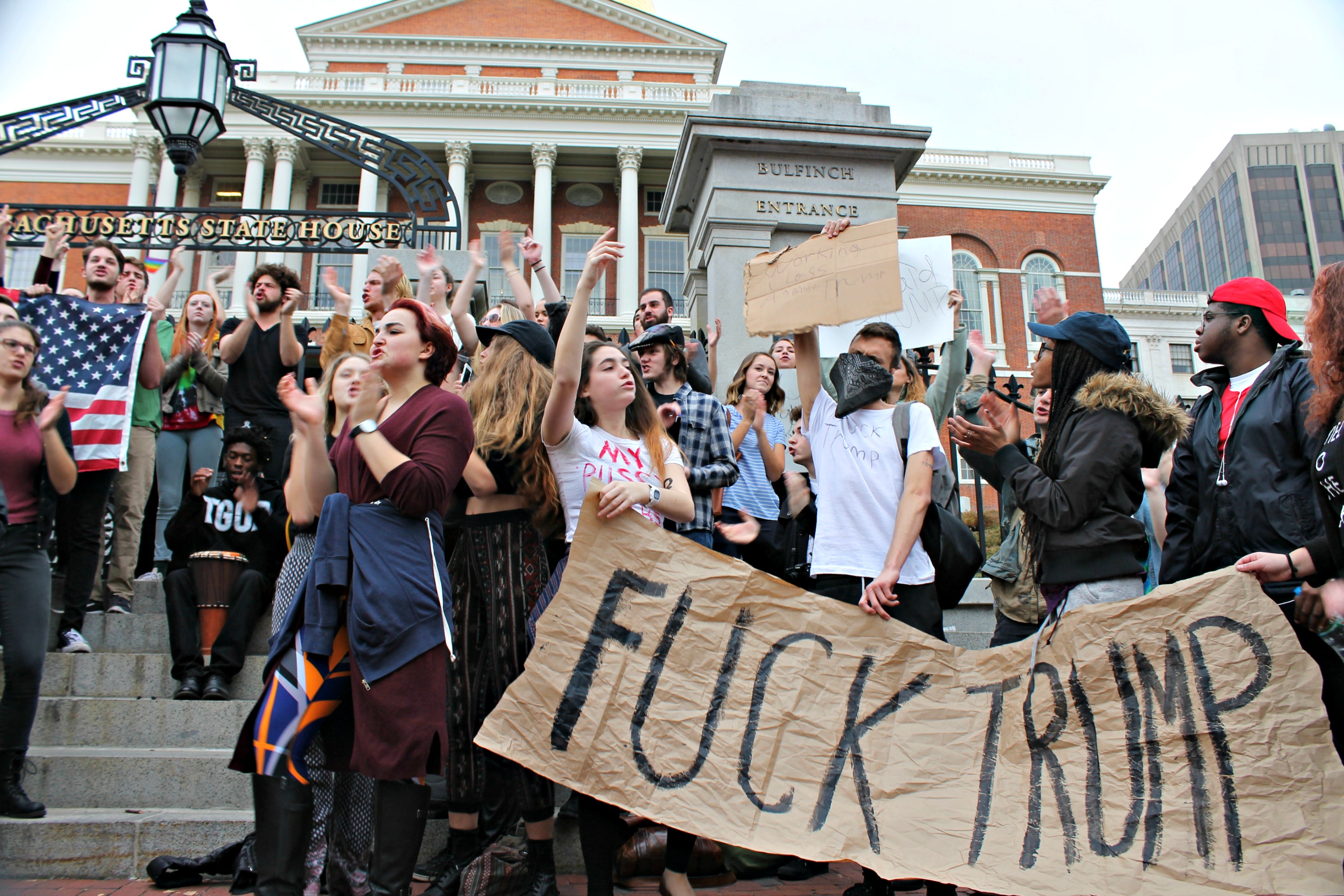 Trump’s levels of support varied widely throughout the state, ranging from 61.9 percent in Tolland to 6.5 percent in Cambridge.

In Boston, a Democratic stronghold that gave nearly 82 percent of its vote to Clinton, a total of 37,756 voters cast their ballots for Trump, a number just shy of the total population of Woburn.

Along with the capital city itself, Boston’s bordering communities and closest suburbs remained strongly blue. The nearest town to Boston to go for Trump was Saugus, 11.2 miles away.

Saugus also re-elected Republican state Rep. Donald Wong, who beat back a challenge from Democrat Jennifer Migliore to keep the seat he has held since 2011.

Only one of the Legislature’s 200 members, Whitman Republican Rep. Geoff Diehl, actively backed Trump through both the GOP primary and the general election. Trump won Diehl’s hometown and the adjacent East Bridgewater, another of the three communities Diehl represents. The third, Abington, went for Clinton, 47.5 percent to 46.5 percent.

Several of the towns that voted for Trump — among them, Acushnet, Chester, Dighton, Dracut, Granby, Tyngsborough and Wilbraham — are represented entirely by Democrats in the state Legislature.

As for the most divided communities in an election noted for its particularly deep divisions, the presidential race was closest in Bellingham, where Trump won by just 0.3 percent of the vote. Trump also won Plainville by 0.4 percent, while Clinton took Paxton by 0.4 percent.

The Democratic Party has to embrace pro-growth economic policies and reconnect with working class voters, the dean of the Massachusetts delegation said last week, if it is to have a sustainable rebound from losing the White House, not regaining control of the Senate and hardly making a dent in the Republican grip on the House in last Tuesday’s elections.

Congressman Richard Neal, handily elected to a 15th term in Congress Nov. 8, said the Democratic Party is in the midst of a realignment as voting blocs thought to be reliably blue have flipped red and helped elect Donald Trump this week as President Barack Obama’s successor.

“When I look at our messaging, I often wonder what is in it for our former supporters. I think on the economic side we’ve become more hostile to growth,” Neal, of Springfield, told a breakfast hosted by the New England Council. “I thought that during the (Hillary Clinton’s) campaign that there was more pushback that was coming from the people that used to see us as their voice of aspiration.” 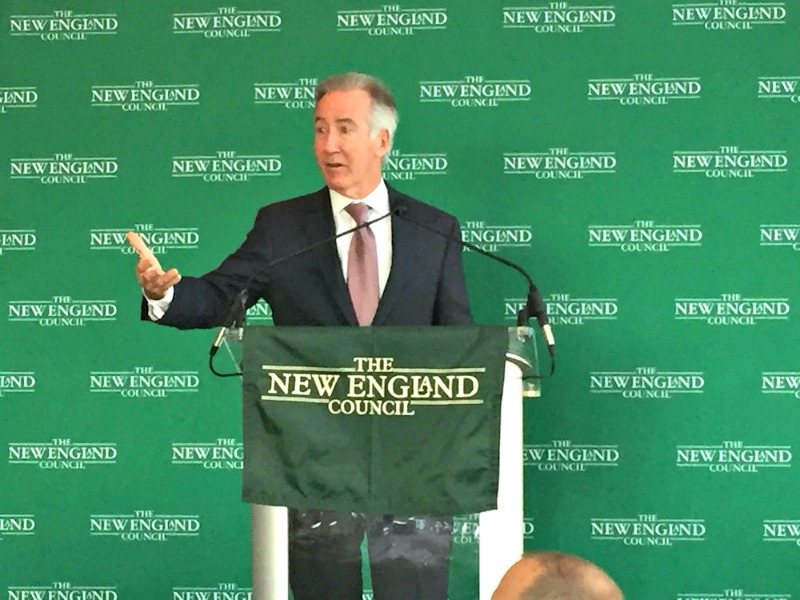 Trump rode that pushback against Clinton — largely from rural areas where working class voters are the great majority and from union households — to victory. Trump recognized the “great sense of anxiety” across the country and during his campaign “touched a degree of emotion and scratched enough emotions across the country to speak to that issue of that anxiety,” Neal said.

At the core of that anxiety, Neal said, is the economy. And while many of those voters fret and stress over their household budgets, the Democrats have become reliant on and more aligned with the rich.

If Democrats are to be successful in future elections, the congressman said, the party needs to reach out to union households and working class voters in once-blue states Clinton lost — such as Pennsylvania, Michigan and Ohio — and “start speaking to the challenges they face every day.”

Neal, a former mayor of Springfield, was first elected to Congress in 1988 and sits on the powerful House Ways and Means Committee.

Though he will remain in the House minority and Republicans will control the White House and Congress, Neal said he believes there is room for he and other Democrats to work with President-elect Trump, who Neal said “in a lot of ways ran against Republican orthodoxy.”

“He campaigned on behalf of infrastructure, which I think can be done because Secretary Clinton was for a big infrastructure bill as well,” he said. “Those are the kinds of investments, I think, that would bring back some of those people who feel aggrieved.”

The first phase of building new roadway through old toll plazas will be complete ahead of Thanksgiving and the speed limits there will soon be increased, Transportation Secretary Stephanie Pollack said last week.

“Our goal was to make sure that the work on the Turnpike did not bleed into the busy highway driving season that usually begins the week before Thanksgiving, and we will achieve that goal,” Pollack told reporters at a Massachusetts Department of Transportation facility in the South Boston Seaport. 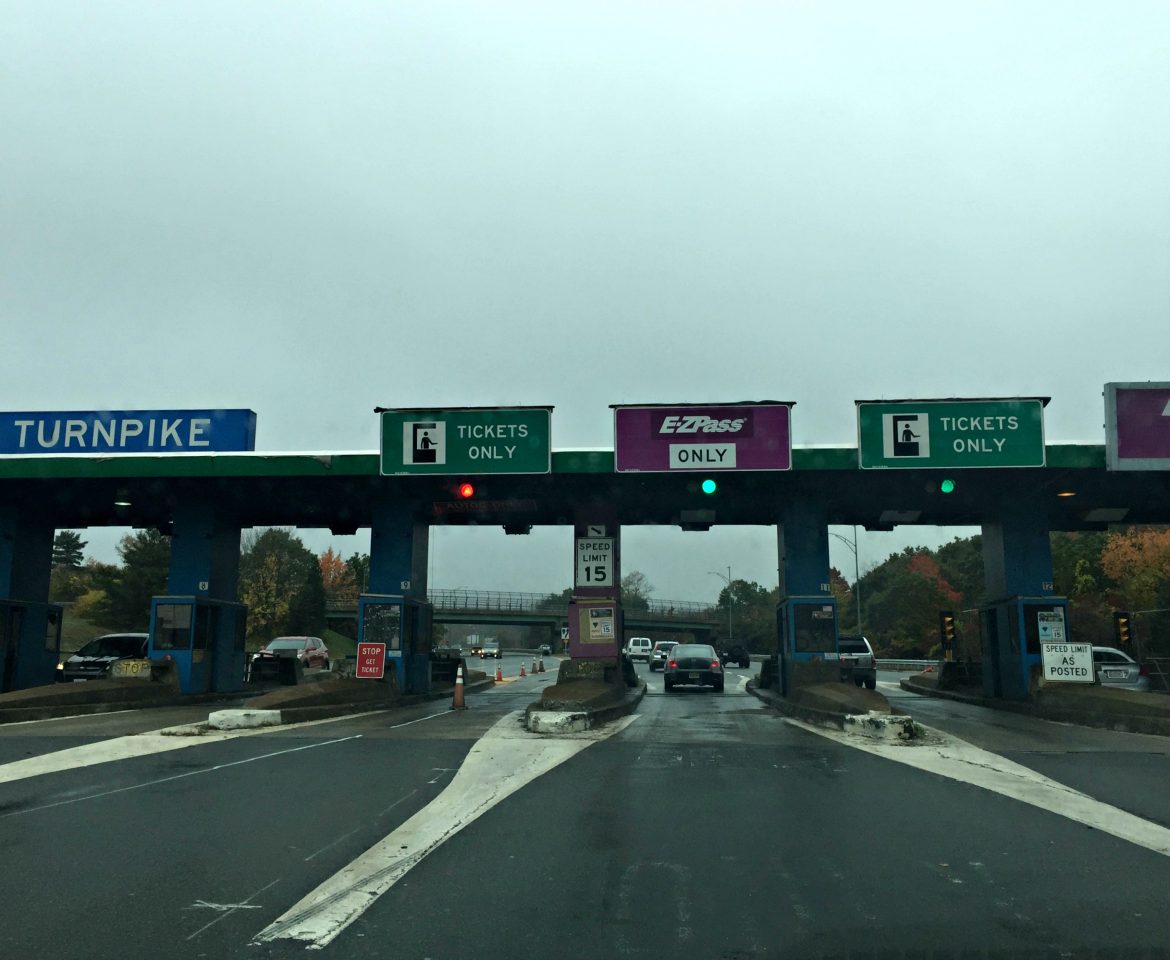 You won’t be seeing these anymore …

“We’re going to raise the speed limit from the current 15 miles-an-hour soon, but you’re still going to have to go slower than highway speeds.”

After switching on all-electronic tolling on Oct. 28, the state immediately began dismantling the obsolete toll booths where drivers once collected Massachusetts Turnpike tickets and paid their tolls. Thanking drivers, Pollack said everyone on the road has been safe as roughly 300 to 350 workers undertake a project that requires working generally around-the-clock.

The initial phase set to end later this month will place roadway through the middle of the old toll plazas. The full removal of all toll booths and roadway reconstruction will be complete in about a year.

“By the end of next year when all of the roadway reconstruction work is done it will literally look as though there were never ever toll booths on the Mass. Pike,” Pollack said. She said nearly all of the 155 toll booths have been removed and workers have used enough pavement for 116 miles of roadway.