Four hundred years after Spanish writer Miguel de Cervantes Saavedra wrote his final words, his greatest fictional creation — Don Quixote de la Mancha — lives on in those among us whose nobility of spirit compels them to fight seemingly hopeless battles for truth, justice, community or love.

Then there are those who fight obviously hopeless battles because they don’t want certain people in their backyards.

Such a battle is happening in Millbury, where Worcester-based Spectrum Health Systems Inc. plans to open a methadone clinic in an industrial zone at 50 Howe Ave., where a staff of 12 would help as many as 175 people each day.

Spectrum, founded in 1969, helps individuals and families whose lives have been impacted by addiction and mental health disorders. The agency has facilities in many Massachusetts communities.

Spectrum has met zoning requirements. They have more than the required parking. The building has public water and sewer service. Spectrum has agreed to add lighting and security cameras and clean up the site. Millbury’s public safety officials will have access to security camera footage and expect no problems with the clinic.

Moreover, Chapter 40A, Section 3 of the Massachusetts General Laws, the Dover Amendment, exempts certain nonprofit organizations from some zoning restrictions. If necessary, Spectrum could likely invoke the Dover Amendment to gain approval.

For all these reasons, the Millbury Planning Board on Nov. 14 approved Spectrum’s site plan.

Prior to the board’s decision, some Millbury residents had lobbied hard against the clinic. They rallied at the Asa Waters Mansion on Nov. 5, holding signs declaring the clinic is the “Right idea … WRONG location,” because it is 800 feet from Windle Field, where youth play sports. They packed Planning Board meetings to object on every conceivable grounds.

Free speech is usually a beautiful thing, but it exudes a foul odor in a situation where the people who would be served by Spectrum are already living here — not in Millbury backyards exactly, but in Millbury homes and apartments. Many residents of Millbury, like people everywhere, struggle with addiction and mental illness. Many have sought treatment and remade their lives. Sadly, far too many have died. The only communities in America untouched by addiction and mental illness are ghost towns.

Yet even in the wake of the Planning Board’s approval, some residents are vowing to appeal.

More than 200 signed a petition for a Jan. 3 special town meeting that will cost about $1,000. That could lead to a special election for a bylaw to restrict the siting of methadone clinics. That could cost another $5,000. And, depending upon what that bylaw says with regard to the Spectrum proposal, that could spark litigation likely to cost Millbury taxpayers a good deal more.

I have lived in Millbury since 1993. It’s an unpretentious place with a rich history. The residents are mostly good people who usually help their neighbors, only occasionally drag race through 30 mph residential zones, and only once in a great while make false crime reports. We have a handful of Ph.D.s and a sprinkling of sex offenders, a few picture-perfect properties and a lot of suburban so-so, and some drab but useful industrial sites.

In short, Millbury is Averageville, U.S.A.

I walk the streets of downtown Millbury every evening, often near the very property proposed for the methadone clinic. I see the sights and hear the sounds of the town. The good, such as the shouts of youth playing football or soccer at Windle Field. And the bad, such as the staggering figures with bloodied faces who occasionally spill out onto the public way from one or another of our downtown bars.

Trust me, you have far more to fear from driving, being a pedestrian, or being in the wrong bar at the wrong time than you have from anything likely to take place at or near a methadone clinic. 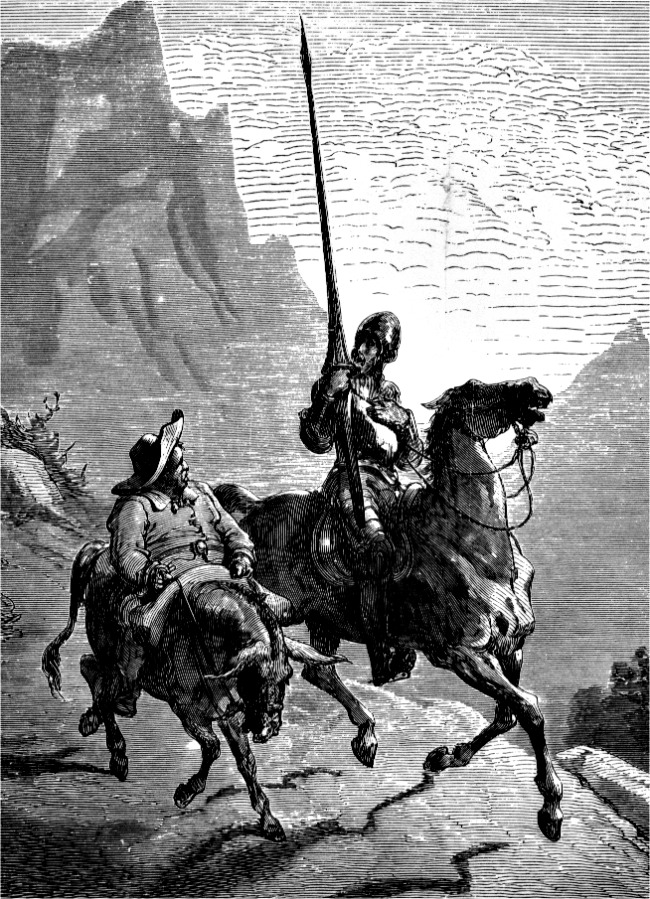 Don Quixote and Sancho — never been to Millbury …

There is a time for noble causes, for tilting at windmills, for becoming Don Quixote. This is not such a time. Every dollar wasted in fighting this clinic is a dollar better spent fighting addiction itself.

If you really want to make a difference in your community, be it Millbury, Worcester or elsewhere, donate to organizations such as Spectrum. Or write a check to your local scholarship fund so that more of our children and neighbors can find a future of meaning, purpose and sobriety.